Rebuilding a T-5 Five-Speed Part 2: Putting It Together 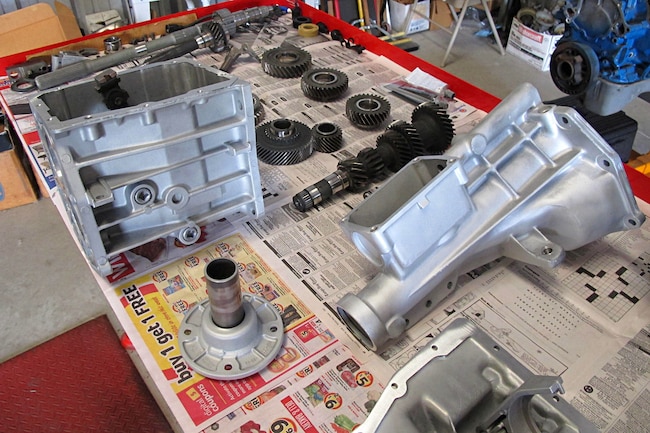 In our July 2019 issue of Mustang Monthly, we introduced you to the process of rebuilding your own T-5 manual five-speed transmission for your Mustang project with Part 1 of this series, in which we disassembled this T-5 for a full rebuild. (If you missed it, you can find Part 1 online at: mustang-360.com/how-to/chassis-suspension/1904-rebuilding-a-t-5-five-speed-part-1-disassembly. ) Be it the original T-5 found in the tunnel of your Fox-body Mustang, or perhaps you're working on a low-buck five-speed conversion for your classic Mustang, handling the rebuild of your T-5 yourself is not only a great learning experience—it also provides the satisfaction of handling another aspect of your project yourself, saving you money in the process.

This month we embark on Part 2, where we provide you with the details you'll need to assemble a T-5 five-speed with new bearings, seals, blocker ring components, and more to make your T-5 ready for many more years of service. We'll be utilizing a Ford Performance Parts M-7000-A T-5 World Class Rebuild Kit for this. This 94-piece kit includes everything you need to rebuild a T-5 that has seen common wear and mileage. It will work with the following T-5 applications:

If you've disassembled your T-5 and found shaft/spline/gear damage, the Ford Performance Kit, while still required for your rebuild, won't help you there. You'll need to source replacement hard parts, either from another used transmission, or from an aftermarket parts source. There are a few new parts available as well as higher-end racing gearsets/shafts that will put a bit of a dent in your budget. One great source for internal hard parts—as well as conversion parts for classic five-speed conversions—is Modern Driveline [(208) 453-9800; moderndriveline.com]. You'll also find great info on the company's website, such as a T-5 history section and a T-5 specifications page where you can research your trans by tag number.

Let's grab our cleaned case parts and our M-7000-A parts kit and follow along as David Piercey of David Piercey's Mustang Performance assembles our fresh T-5 for many more years of service! Be sure to download Tremec's T-5 rebuild manual to aid in your benchwork at home if this is your first go at a T-5 rebuild (tremec.com/anexos/TRSM-T5-0510-R1_173.pdf).

Identifying Your T-5
At first glance you might think that all T-5s are the same, and that is simply not true. Not only do you have different T-5s for different engine applications within the Mustang itself, but you have different T-5s for truck and even GM applications. So, you must be careful of what you're planning to buy, especially if the trans is sitting loose on a workbench, salvage yard grounds, or the buyer doesn't really know what he has.

If the metal case tag is still in place, this will be your best bet to determine what you're looking at. The case tag will ID application, gear ratios, and more. Plus, if the tag is still in place, it's a pretty good indication that the box has never been messed with. Hit the Interwebs for a case tag decoder.
A quick way to determine year of manufacture is to check the main case, top cover, and tailshaft castings for this circular date stamp. This particular example is from 1986 when the T-5 was still a "Borg Warner" product and before Tremec bought the brand. All three pieces should have the same year identification. If the main case is "86" and the tailshaft is "91," then someone has been in it and mixed/matched parts—a solid sign of a previous rebuild/repair.
Early T-5 transmissions used a standard hex-head-style bolt for the Fifth/Reverse gearshift lever pivot pin. This will help to ID early "non-World Class" boxes that used gear oil instead of ATF.
Later World Class T-5 transmissions used this Torx-style bolt for the Fifth/Reverse gearshift lever pivot pin. It also made it harder for Joe or Jane DIY to accidentally remove the bolt thinking it was the case fill location (drain and fill are both located on the passenger side in all applications).
While this difference is internal, we wanted to show you the differences in the three T-5 mainshafts used over the years. From left to right we have the 1993 Cobra and Ford Racing T-5 shaft, the '85-'93 shaft, and the '83-'84 shaft. The Cobra/Ford Racing piece utilizes a caged pocket bearing for the input shaft (note the smaller diameter of the shaft tip), whereas the '85-'93 uses individual roller bearings. The '83-'84 piece is unique in that while it still uses the roller bearings for the input shaft, it does not use the caged needle bearings under the gears like the '85 and ups do, which is why that piece has grooves machined in it for the thicker gear oil used in that transmission.