Part 1: Cracking open a used transmission for a rebuild 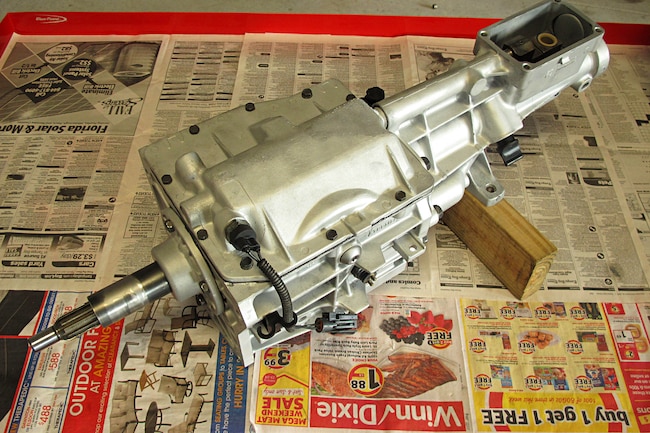 As Mustang owners upgrade the performance of their rides, weak parts are swapped out for stouter pieces. This has been horsepower 101 for decades. When it comes to the Fox Mustang’s T-5 five-speed, once the horsepower goes up and the sticky rear tires are bolted on, the T-5 will often “exit stage right” in some noisy fashion. Often it is a broken Third gear, or some stripped teeth on the input shaft. We’ve seen all manner of carnage over the years. The good news is that the T-5 has been so popular that there are plenty of parts to rebuild and upgrade these transmissions. If you’re lucky, you might even find a T-5 that was swapped out before it broke. These are often sitting in the corner of some shop under a workbench taking up valuable room and can be had for just a few hundred bucks. It takes a little digging and some networking, but there are a lot of T-5 transmissions out there ready for a rebuild and a second life in the tunnel of your classic Mustang (or in your Fox project).

Why rebuild a T-5 versus, say, buying a new transmission like a Tremec TKO-series unit? There’s nothing wrong with the TKO transmissions; they’re built to take the abuse behind high-horsepower engines and are proven winners in many racing circles. However, they have a larger profile than the T-5, which can cause some fitment issues in classic Mustangs (especially the ’65-’66 models), and of course you have that new transmission price tag to go with it. If you’re on a budget, or perhaps already have a T-5 lying around from a barter deal or other project, then rebuilding it is going to be the most economic route, and the smaller size of the T-5 means no fitment issues either. Pretty much the only limiting factor of using the T-5 is its power handling capability. For our typical reader with a “bolt-on” small-block that runs radial street tires and doesn’t drag race with super sticky tires, the T-5 is a great solution.

Rebuilding the T-5 does take a few shop tools, including a press, snap-ring pliers, and pullers, most of which you can find at discount tool stores if you don’t already have them, or hit up a friend with such tools to lend you a hand. Worst case, you can take the parts to a machine shop to be pressed off and on. Other than these few tools, the breakdown and rebuilding of the typical T-5 takes nothing more than some metric handtools and a whole lot of elbow grease getting everything clean to put the transmission back together. We visited our friend David Piercey at his shop, David Piercey’s Mustang Performance, located in Thonotosassa, Florida (just outside of Tampa). David is a wizard with the T-5 five-speed, having built everything from stock rebuilds to all-out race boxes. His selection of T-5 cores meant we could provide some T-5 history/identification in this story as well, which we’ll show in Part 2. While we won’t be using it until reassembly next month, we made a quick call to our friends at Ford Performance Parts for an M-7000-A T-5 Rebuild Kit. The M-7000-A has just about everything you need for the typical rebuild of a 1985-1995 Mustang five-speed.