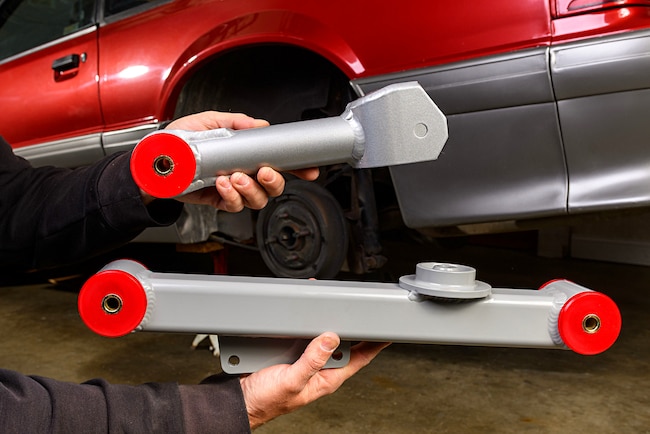 When looking for replacement arms, we chose Steeda’s Aluminum Rear Control Arms for 1979-2004 Mustangs. Their Lower Control Arms are fabricated from 6061-T6 aluminum and available with two different bushing options: 4500 series for street, road racing, and light drag use, and 4600 series for drag racers and high-horsepower, heavy street cars. We chose the former for our mostly stock 1991 Fox-body.

The Steeda Aluminum Upper Control Arms are also made from the same heat-treated, 6061-T6 aluminum. Both sets of arms include Steeda’s thoughtful three-part bushings that use hard center bushings sandwiched by softer outer bushings. The harder center bushing transfers the torque loads to the chassis more directly while the soft outer bushings allow flexibility for suspension movement.

A key feature of the aluminum construction is weight reduction: the lower control arms weigh 35% less and the upper arms weigh 40% less than the stock stamped steel arms. Pretty impressive.

The upper arms also included new polyurethane bushings for the differential end. This was welcome, as we found one of our stock upper control arm bushings was broken and started to slide out from its shell. The following photos detail the installation process and highlight why the Steeda Aluminum Rear Control Arms are a welcome upgrade on this weary 1991 Mustang GT.

Steeda’s Aluminum Rear Control Arms are stronger and lighter than the stock components they replace. They feature unique three-piece bushing packages that allow suspension flexibility without sacrificing torque transfer. Polyurethane differential-end bushings, hardware, and special grease are also included.
The Steeda Aluminum Rear Control Arms feature thick-walled 6061-T6 construction, strong welds, and a well-designed spring perch that accepts the factory springs and isolators.
A thoughtful touch is the inclusion of polyurethane differential-end bushings and hardware to replace the often-worn-out OEM rubber pieces.
The Steeda Aluminum Rear Upper Control Arms feature a thick, boxed axle end and a reinforced chassis end. Under acceleration, this arm is in heavy tension, so the wrap-around gusset adds much-needed strength in this critical area.
We began the installation process by removing the rear sway bar from the stock lower control arms.
With a jack under the rear pivot point, we removed the bolt, slowly lowered the arm, and removed the rear spring.
After removing the spring, we removed the front pivot bolt and the arm.
With the stock lower control arm removed, we compared it to the Steeda replacement. Note how the Steeda arm is boxed compared to the stock arm’s stamping. Also, the soft rubber bushings of the stock arm are replaced by firmer polyurethane pieces. The Steeda lower arm weighed 2.2 pounds less than the stock arm; that’s a 35% weight reduction!
Before installing the Steeda Aluminum Rear Lower Control Arms, we applied a layer of the included waterproof grease on the flanges of the lower control arms. Tip: if you don’t have disposable rubber gloves, mineral spirits easily removes the grease from your hands.
After lubricating the bushings, we slid the control arms in place and loosely installed the front pivot bolts.
With a jack supporting the rear of the control arm, we reinstalled the rear spring and isolators.
After jacking up the rear of the control arm into position, we inserted the rear pivot bolt and tightened the front and rear bolts to 95 ft-lb. Tip: it helps to use a second jack under the differential to help rotate the axle to line up the holes.
After installing both Steeda Aluminum Rear Lower Control Arms, we turned our attention to the upper arms. We began by removing the front and rear bolts and the arms.
Yikes! The source of our sloppy rear axle feel was these trashed upper control arm bushings. Note how under acceleration (tension), these bushings were failing.
With the stock upper control arm removed, we compared it to the Steeda part. Besides being more rigid and incorporating a polyurethane bushing, the Steeda upper arm weighed 1.2 pounds less than the stock part, which is an impressive 40% reduction.
Before installing the Steeda Aluminum Rear Upper Control Arms, we needed to remove the stock rubber bushings from the axle. To separate the bushing from its shell, we used a ¼-inch drill bit and “walked” it around the perimeter of the rubber bushing.
After using the drill, we removed the remains of the rubber bushing from its shell.
We cleaned up any remnants of the rubber busing with a wire brush chucked in our drill.
After cleaning the bushing shells, we lubricated and installed the included polyurethane bushings
We lubricated and placed the included polyurethane “thrust washer” on the other side of the bushing shell.
After lubricating the bushing sleeve, we slid it into the polyurethane bushing.
Before installing the Steeda Aluminum Rear Upper Control Arms, we lubricated the bushing faces and buckets with the supplied grease.
Next, we slid the Steeda Aluminum Rear Upper Control Arms into place and installed the bolts. It helped to use a jack strategically positioned under the rear axle to line up the holes.
With all the arms installed and the bolts torqued, we reinstalled the rear sway bar to the Steeda Aluminum Rear Lower Control Arms
That’s better! Steeda’s Aluminum Rear Control Arms, this 1991 Mustang GT felt much firmer from stop lights and tracked straighter through corners. This was a welcome afternoon upgrade from our worn-out stock rear control arms!