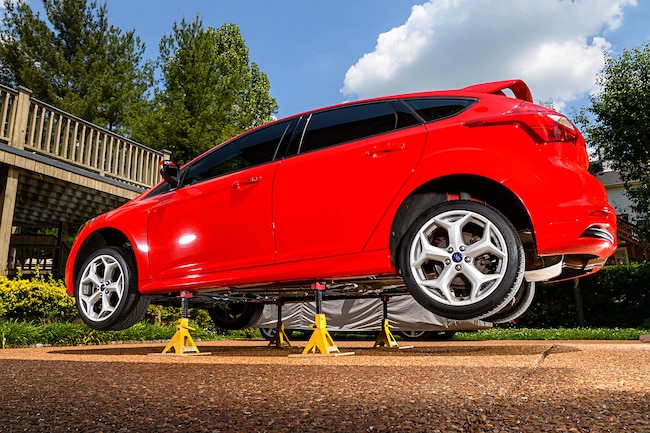 Today’s unibody cars are designed to be lifted simultaneously at four points under their chassis. That’s great if you’re a professional shop with a lift, but most shade tree mechanics only have a quartet of jack stands and a floor jack in their arsenal. If you’ve ever tried to get jack stands under a modern car by using a floor jack, you know how tedious and annoying the process can be.

Both versions provide a safe, secure way to jack and support your Focus. Because of their easy installation, we chose Steeda’s Ultra Light and Low Profile Bolt-In Chassis Jacking Rails (PN 555-5208).

The bolt-in design of the jacking rails utilizes “flag” tabs on the fasteners that use existing holes in the chassis for mounting. No drilling or welding is required!

Steeda’s Ultra Light and Low Profile Bolt-In Chassis Jacking Rails were super-easy to install. Even a first-timer could have them bolted up in under an hour. The jacking rails are a cost-effective time-saver, and a must-have for every Focus owner who does their own wrenching.

3. The included offset studs and flag nuts utilize existing holes in the chassis to mount the jacking rails to the rocker panels.

4. First, we got our Ford Focus test subject in the air and supported it securely with ramps and jack stands.

5. Then, we removed the underbody cover panels.

6. Next, we removed the screws securing the cross brace to the floor pan.

7. The Steeda kit includes these unique offset studs that utilize existing holes in the chassis to mount the jacking rails to the floor.

9. Next, we inserted the supplied flag nut into position using a nearby hole in the chassis.

10. Next, hold the rear of the jacking rail into position and loosely installed the included bolt.

11. With the jacking rail aligned with the rocker panel pinch weld, we tightened the rear bolt.

12. Then, we tightened the cross brace and offset stud bolts up front.

13. We finished the installation by replacing the underbody cover panel.

14. The Steeda jacking rails make lifting our Focus up a breeze.

Overview on Crower shaft-mount rockers, including options and when you need them.