Beefing Up a Cobra IRS Differential 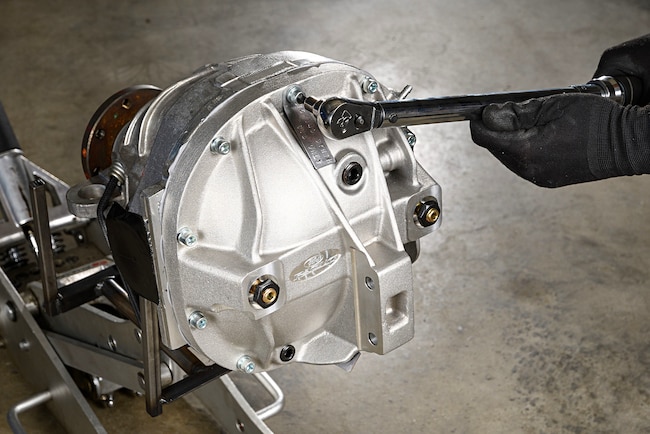 Quadruple-digit-horsepower 2003-2004 Terminator Cobras are so commonplace these days that it’s easy to forget the cars were designed for nearly one-third that figure. Add sticky tires, hard launches, and beefed-up axles, and it’s only a matter of time before highly-stressed parts cry uncle.

Maximum Motorsports offers what Ford Performance Parts calls an axle girdle because two load bolts support the differential bearing caps, increasing the torque capacity of the differential assembly. It’s clear to see why the Ford Performance Parts cover is significantly stronger than the stock piece. The Ford cover features thick webbing to support the rear mount, and there’s more material everywhere. Besides including convenient fill and drain plugs, there’s additional ports an oil cooler and a well-designed vent baffle. It’s even marked for drilling if you want to add a fluid temperature sensor. Maximum Motorsports clearances the cover so, when used with their aluminum differential mounts, it clears the IRS subframe.

As far as fastening the differential to the IRS subframe, Maximum Motorsports offers two bushing options: polyurethane and aluminum. The Maximum Motorsports polyurethane bushings are direct replacements for the factory rubber parts, but significantly reduce differential movement with virtually no increase in noise, vibration, and harshness (NVH). The aluminum mounts offer a wider range of pinion angle adjustment and the benefits of solid differential mounting (reduced wheel hop, better differential support) in exchange for a modest increase in NVH.

We’ve previously tried the aluminum bushings, and they’re definitely the ticket for serious customers. For comparison purposes, we wanted to test the polyurethane option this time around. Maximum Motorsports includes a handy tool to extract the rubber bushing from the stock rear mount, so installation is a breeze.

After swapping covers, pouring in fresh gear oil, and reinstalling the differential, we went for a test drive. We were really pleased with the results. Obviously, the cover didn’t offer any performance benefits, but the polyurethane bushings lived up to their billing; less differential bushing compliance with no noise, vibration, or harshness over stock.

Check out the captioned photos for the details.

2. Inside the Ford Performance Parts cover, you can see the two load bolts that support the differential bearing caps. Besides including convenient fill and drain plugs, there’s additional ports an oil cooler and a well-designed vent baffle. It’s even marked for drilling if you want to add a fluid temperature sensor.

4. To gain access to the differential, we first removed the cat-back exhaust and driveshaft.

5. Next, we removed the wheels, parking brake cables, and hung the brake calipers out of the way. (Note: Do not let the calipers hang by the hoses. We used a bent coat-hanger wire to hang the caliper off to the side.)

6. Before removing the spindle mounting bolts, we marked the upper bolt’s orientation so we didn’t lose our wheel alignment settings.

7. To pop the axles out of the differential, we used a 1 5/8-inch span ball joint separator. (This tool makes what can be a frustrating task a breeze.)

8. With the axles free, we carefully removed the axle assemblies.

9. Next, we removed the nut from the front control arm mounting bolt.

10. Then, we removed the front differential mount bolts.

11. Later-model Cobras have this brace that supports the front of the differential that needs to be removed.

12. To gain access to the rear differential mounting bolt, we marked and removed the rear tie rod end.

13. With a floor jack supporting the differential, we removed the rear mounting bolt.

14. We used a floor jack with a homemade cradle to carefully lower the differential and roll it out from under the vehicle.

16. With stock cover removed, we compared it to the Ford Performance Parts girdle. The Ford cover features thick webbing to support the rear mount, and there’s more material everywhere. (Note the notch milled out of the load bolt bosses for IRS cradle clearance.)

17. With the cover removed and the fluid drained, we cleaned the gasket surface with a scraper and brake parts cleaner. (Tips: After draining, tilt the differential nose down to keep the remaining fluid from dripping across the clean flange. Also, be sure to clear the bolt holes with cleaner and compressed air.)

18. With the surfaces clean, we applied a bead of RTV silicone gasket maker to the flange.

19. After tightening the cover bolts in a cross-pattern to the specified torque, we tightened the load bolts and lock nuts per the included instructions.

20. Since we don’t plan on changing the fluid often, we filled the differential with the best motorsport-grade 75W-140 synthetic gear oil we could find. This product also included the necessary limited slip additive to keep the differential’s clutch packs from chattering.

21. Next, we turned our attention to the rear differential mount bushing. Maximum Motorsports includes this nifty tool that pulls the rubber bushing from the mount with ease.

22. With the bushing removed, we installed the Maximum Motorsports polyurethane bushings into the stock mount. Compared to the stock rubber bushings, the polyurethane pieces are considerably stiffer, which will keep our differential more firmly in place under load.

23. We fastened the mount to the differential cover using the factory bolts.

24. With the differential buttoned up, we reinstalled it in the car.

25. The Ford Performance Parts girdle is quite a bit beefier than the stock cover, but still fits like a glove. The Maximum Motorsports polyurethane bushings do a great job of keeping our differential more firmly in place under power, but were indistinguishable from the stock rubber bushings from a noise, vibration, and harshness standpoint. That’s a win-win.