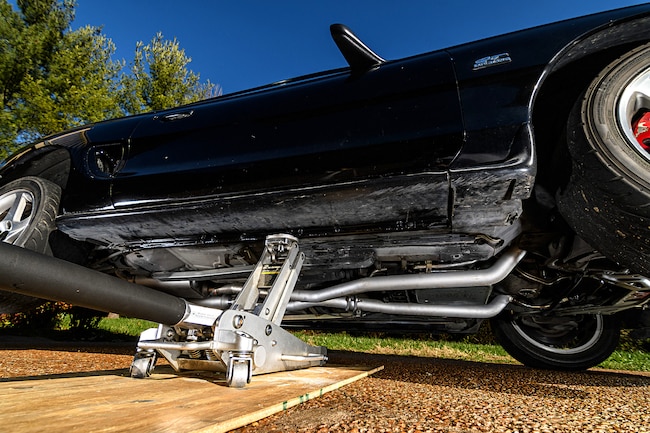 Lowering springs give your Mustang a sweet stance, but they make jacking up your pavement-hugging pony an annoying, multi-step process. 1979-2004 Mustangs are too low for most floor jacks to slide under a safe jacking point, so unless your garage has a lift (lucky dog), you have to drive your Mustang on ramps before using a floor jack. Besides being frustrating, jacking up a Mustang improperly can be dangerous and damage the car’s structural sheet metal.

Here’s where Stifflers Stiffening Rails come in handy; not only do they add a level of structural rigidity to the flimsy Mustang chassis, they make jacking up a Mustang a simple, safe process.

Stifflers’ Stiffening Rails weld to the rocker panel pinch weld seam, which is one of the strongest areas on a Mustang’s unibody. They’re made from 1 x 1.5-inch rectangular steel tubing and features a durable, black industrial powder coat. They even masked off areas for welding to save you time.

Stifflers offers their Stiffening Rails as part of their “Fully Integrated Technology (FIT)” system, which adds subframe connectors and a web brace. Since our lowered 1995 Mustang GT already had a set of welded-in subframe connectors from a different manufacturer, we opted to only install the stiffening rails.

While installing the stiffening rails is straightforward, the devil is in the details. We’ll show you a few tips and tricks we learned while installing a set on our lowered pony.

After using Stifflers Stiffening Rails to jack up our Mustang, we’re kicking ourselves for not installing them sooner!

1. Jacking up a lowered 1979-2004 Mustang is a painstaking, tedious process. We had to make some low-profile ramps just to get a floor jack under this 1995 GT. Sheesh.

2. When welded to the bottom of each rocker channel, these stiffening rails from Stifflers greatly simplify the process of jacking up a 1979-2004 Mustang by adding a sturdy place for a floor jack and jack stands. End caps and instructions are included.

3. We began the installation process by removing the panel fasteners from the rocker panel cover.

4. While it’s not required, for photo purposes, we completely removed the driver’s side rocker panel cover. (Besides, it fell off by itself anyway!)

5. In order for the Stifflers stiffening rails to fit properly, the rocker panel pinch weld needs to be straight. Our rocker pinch weld seam showed damage from previous jacking.

6. We used some pliers to straighten the rocker panel pinch weld seam.

7. We mocked up the installation by lining up the holes in the pinch weld with those in the stiffening rails.

8. Using the bare metal sections on the Stifflers stiffening rails as a guide, we marked the pinch weld seam with a paint marker.

9. Then, we removed the paint on the corresponding areas on the pinch weld seam. (Don’t forget to remove paint from the bottom edge and backside as well.)

10. To reduce the chance of corrosion, we applied a layer of etching primer to the bare metal sections on the stiffening rails, and then sanded away the primer in the areas where we planned to weld.

11. We clamped the stiffening rails to the pinch weld seam to reduce any gap between the two parts.

12. As we mentioned before, removing the rocker panel cover isn’t necessary, as shown here on the passenger’s side. A few clamps served to raise the cover out of the way as well as hold the stiffening rail in place.

13. We used a wire-feed welder to weld the stiffening rails to the pinch weld seam.

14. To avoid melting through the thin rocker panel sheet metal, we created a series of overlapping spot welds rather than laying one continuous bead.

15. A couple coats of undercoating to the welds provided a measure of corrosion prevention.

16. After the paint cured, we reinstalled the rocker panel cover and reinstalled the fasteners. (If your original ones were mangled during removal, your local auto parts store has replacements.)

17. Stifflers includes some end caps to keep water and debris from collecting inside the stiffening rails.

18. Now with Stifflers stiffening rails, we can lift our Mustang on each side using a floor jack without driving on ramps. They also provide a safe and convenient place to position jack stands. The time and frustration saved makes Stiffers stiffening rails one of the best modifications for any 1979-2004 Mustang.