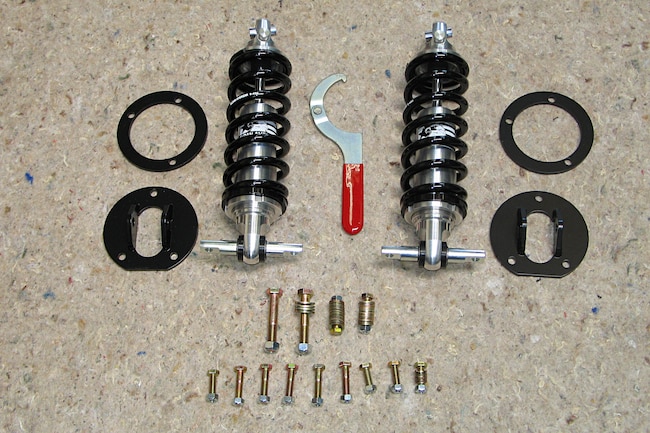 A coilover suspension setup is a great way to upgrade the front suspension in classic Mustangs, and there are several manufacturers that offer basically two kinds of systems: One type uses dedicated upper and lower control arms along with the coilover shock and spring configuration; another uses stock or stock-type upper and lower arms, and those are usually known as a “bolt-in” type. Here, we are highlighting a bolt-in–style front coilover conversion kit manufactured by Aldan American.

It truly is a bolt-in system, as you will see because it installs directly into place—in lieu of the stock-type shock and standard coil spring. The only modification that needs to be done to the car is slightly enlarging the mounting-bolt holes in the shock tower to allow the larger-diameter bolts to be fitted that come with the Aldan American kit.

Adjustable coilovers clearly offer better performance, handling, and ride quality compared to the stock configuration. Also, being able to adjust the front ride height is another benefit of the system.

All in place and ready to go, the Aldan American coilover kit is relatively easy to install. With access to a hoist it can be installed in about three hours. Installation can also be readily accomplished with a floor jack and a pair of jackstands.

Our good friends at Mustang Country International—a well-known vintage Mustang parts and repair shop with a good selection of used parts—performed the installation on our 1966 Mustang hardtop subject car. Equipped with a six-cylinder engine, this is an R&D endeavor of sorts; this is the first six-cylinder Mustang that Aldan has installed the system into. Other cars have been V-8–equipped, so the lighter weight at the front of this car will be something a little different.

We can report the setup worked perfectly in this car, as we drove it several miles and it rode and drove exactly as it should. As for installation, Mustang Country was able to install the system in about three hours. Let’s take a look.

1. Everything shown here is included, and that means the pair of assembled coilover shocks/springs, the shock mounts, the spanner-wrench adjusting tool, and required fasteners. PNs M1SBF2S and M1BBF2S cover the single-adjustable shock systems.
2. Begin by measuring and writing down the existing ride height on your car so you can determine after installation how much lower you want to go, if at all. Ride height can be lowered up to two inches.
3. With the car either on a hoist or a pair of jackstands and front wheels removed, unbolt the front shock from its upper mounting point under the hood. Next, remove the shock mount itself.
4. Unbolt the bottom of the shock from the spring perch. The shock can then be removed from the car.
5. Our car already had a pair of lowering springs in place; their shorter height means once the shock was out, they were relatively easy to remove, as shown here. If your car has its stock springs still in place, you will need a spring compressor to remove them.
6. With the shock and spring out of the way, the spring perch can be unbolted and removed, as shown here. These are not reused with the coilover setup.
7. Next, remove the inner wheelwell spring cover from the car. The bolts are accessed from the under the hood as shown, but you might have to the hold the nuts in place from inside the front fender at the same time to loosen the hardware.
8. Using the included upper shock-mount plate as a template, secure it in place with a pair of C-clamps, as shown. Then enlarge the existing mounting holes with a grinding bit. This is the only modification we had to do for installation of the Aldan American kit.
9. Once the car’s mounting holes are enlarged, remove the plate and place three washers for each hole onto it in preparation for reinstalling it with the shock-mount bracket. You can apply a small amount of adhesive to help hold the washers in place.
10. Install the shock-mount bracket into place under the hood, drop the mounting bolts into place through the mount, place the shock-mount plate up into the shock tower, and install the lock nuts and washers, as shown. Tighten to 35 lb-ft.
11. With all the top components in place, the shock-and-spring assembly installs into place.
12. Back under the hood, slide the 3-inch-long bolt through the shock-mount bracket, with the nut towards the back of the car. Torque the bolt, washers and nut to 75 lb-ft.
13. We came across an important issue during installation that you may or may not need to do. If the change needs to be made, as we needed to do, it’s a very easy fix and only takes about two minutes. We found that when the shock-mount bracket’s bolts were dropped in from the top, they ended up touching the spring on the coilover assembly. To remedy the situation, we removed the bolts and reinstalled them upward from inside the fender. We then tightened the nuts onto the bolts from under the hood, as shown. Problem solved. Again, each car might be different, so you will need to check and see. And to make the change even easier, simply remove and replace each bolt one at a time so the spacer washers that were installed with the shock-mount plate don’t fall out.
14. Everything installed into place under the hood of the car looks like this.
15. We used a screw jack to lift the front suspension by the brake rotor a few inches higher, so we could complete the installation by joining the coilover assembly T-bar to the car’s stock upper control arm. Torque the 1 1/4-inch-long bolt, washers, and lock nuts to 35 lb-ft.
16. Aldan American is in the process of developing rear shocks to go along with its front coilover systems. Installing them is a direct remove-and-replace procedure, and they should be ready sometime relatively soon.
17. With the system installed, the spring pre-load adjusting collar is put at a preliminary starting point. First, loosen the jam collar counterclockwise to allow the pre-load adjustment collar to be moved up or down. Turning the adjustment collar up clockwise will raise the ride height of the car. Moving it down counterclockwise will lower the ride height. We set it pretty close to the bottom of the shock housing due to the fact we were working with a six-cylinder car that has less weight over the front wheels than a V-8 car. It resulted in about a stock ride height. As for the rebound adjustment knob, we set it in the middle of the available settings. You can adjust at any time based on how you want the car to ride and perform.
18. We then lowered the adjustment collar as far as it would go and the result is what you see here. The car’s ride height in front is at about the stock height if not a tiny bit lower than stock. The upshot is the adjustment for having the car as low as possible was as far as it would go with the existing pieces in the Aldan American system we installed. As we said earlier, we were doing a little bit of R&D with the installation on a six-cylinder car. So the solution for Aldan will likely be to offer a shorter spring on systems for six-cylinder applications. If you order a kit for your car, be sure to specify what engine it has (inline-six, small- or big-block V-8) so it can be determined what springs should be included in your kit.