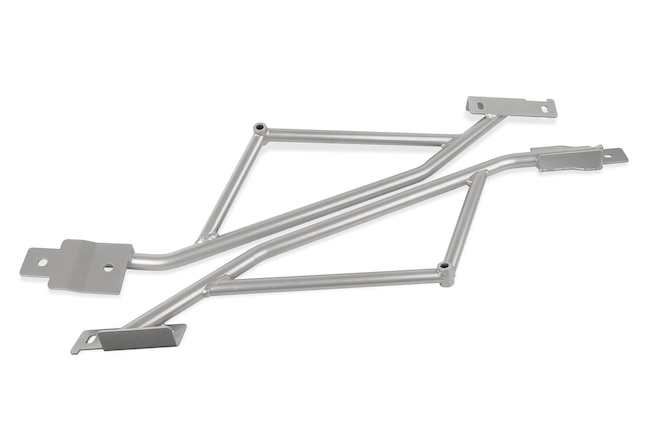 Spot-on handling and ultimate control takes precision—not just with your driving skills, but within the chassis and suspension, too. Whether it’s drag racing, road racing or street performance, no driver can expect consistent acceleration, handling and braking if the vehicle’s suspension is not repeating. Simply stated, if your engine, suspension, brakes and tires don’t perform the same each time, how can you expect to launch hard, drive fast into a corner, or produce steady lap times on track?

If you’re driving your S550 Mustang hard, you may be getting deflection in the IRS, which can lead to inconsistencies in acceleration, handling and braking. Thankfully, Steeda has created a simple fix that’s affordable and easy to install. “With the release of the S550 Mustang, addressing the IRS system was a top priority,” said Glen Vitale, VP of operations at Steeda Autosports. “As with any suspension system, deflection is an issue—if it’s present. Anytime a component is twisting, flexing or vibrating when it should be stationary, there’s potential for a problem. Being the first production Mustang with an IRS since the 2003-2004 Cobras, we knew there would be a great opportunity to capitalize on Ford’s new piece by giving it the Steeda advantage.”

The kit includes left and right bolt-in braces with all necessary hardware. This is a mod you can do in your driveway in about an hour.

Steeda has helped many Mustang owners with its IRS Subframe Bushing Support System that has been a popular choice to limit the movement of the subframe. By adding the IRS subframe support braces you can virtually eliminate wheel-hop or any deflection in the IRS.

“One of the first things we noticed with the S550 was all the wheel hop,” said Scott Boda, Steeda’s director of manufacturing. “This was due in large part to the deflection found in the factory rear subframe. Under hard acceleration with drag radials we noticed over a ½-inch of movement in the factory subframe. Knowing that a solid foundation is needed any time you are trying to apply horsepower to the pavement and accelerate, our attention was focused on minimizing the deflection. Several prototypes, with various attachment points were tested before settling on the final product. It reduces subframe deflection tremendously, traction is improved and wheel hop is gone. Combined with a couple other key components we’ve been able to virtually eliminate deflection in the S550 subframe.”

Triangulated braces tie into the rocker panel at the front.
The rear portion of the brace bolts to the IRS subframe assembly.

Keeping the IRS subframe in place means your rear alignment will remain consistent through the range of travel, handling will be more predictable, and you’ll get better performance from the rear suspension and tires.

“We’ve taken the S550 rear suspension to another level,” explained Vitale. “Our Steeda S550 Mustang Rear IRS Subframe Braces for 2015-2017 Mustang GT, GT350, EcoBoost, and V6 (non-convertible) is built in-house from 4130 chrome-moly steel and powder coated silver metal flake to give it an attractive and robust finish. The additional support comes by effectively tying together three very important points on the S550 chassis. We utilize existing threaded holes in the rocker panel, which is the strongest part of the body, and connect the brace to a front mounting location of the IRS sub-frame and the rear mount of the lower control arm and toe link. Connecting these three points adds rigidity and controls the rear of the car,” he added.

By using existing holes in the chassis, the car doesn’t have to be modified in any way, and there’s no additional NVH (noise, vibration, harshness) associated with installation. Additional benefits include improved more stable cornering, reduced wheel hop, easy installation (does not require removal of cradle), and a lifetime warranty.

“I like to use the phrase, making race car parts is easy, making street car parts perform like race car parts is hard,” exclaimed Boda. “The beauty in all of our S550 parts is they don’t require any permanent modification, so installation is simple. We use all factory-mounting locations, and where there are not factory-threaded holes, we use a through-bolt or a nut-plate design. The Steeda IRS support braces simply bolt on with hand tools and you can install them in your driveway in less than an hour.”