Low-Buck Handling Tech: How To Do The Shelby Drop

One of the oldest suspension mods for an early Mustang is dropping the upper control arms 1 inch, as Shelby American did with the 1965 G.T.350 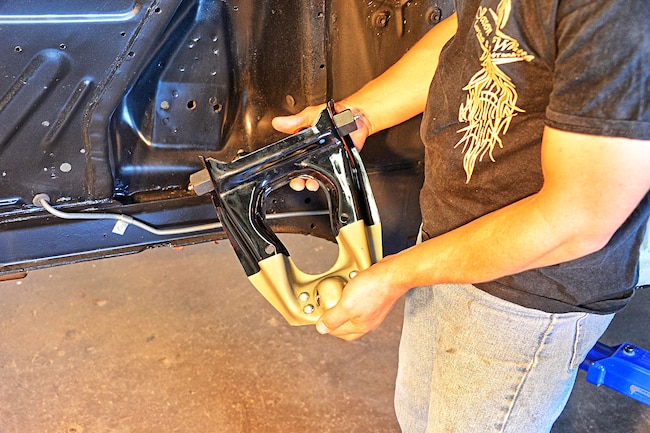 When Shelby American engineered their sports car (Carroll used to say “sport car” minus the “s”) racing tricks one of the significant things they did to improve handling was to lower the front upper control arms (UCA) an inch from Ford’s placement for better handling. Known as the “Shelby Drop,” it is used on many muscle cars and even Camaro fans who drop their UCAs call it the Shelby Drop.

Automotive engineers designed understeer into their suspensions in order to save the average unskilled driver from pushing his car off a cliff while driving around a corner. The understeer is very manageable because when the front tires lose control in a corner, most people’s first reaction is to lift off the throttle in a panic. That moves weight to the front tires, helping them gain traction. Unfortunately, massive understeer is a losing recipe for a race car. It’s the slow way through a corner.

Shelby simply lowered the upper control arms an inch from where Ford put them in order to lower the center of gravity of the car, which reduces body roll and improves the suspension’s camber curve. These are both good for handling.

Jason White, who you’ve seen here many times, is currently building a 1965 G.T. 350 clone. One of the first things he did to the suspension was to perform the Shelby Drop, so we showed up with camera in hand to illustrate how easy it is. It basically means drilling two holes in each shock tower where the upper arm mounts, an inch below the stock holes.

“Precision is the key word when drilling holes in the original shock towers to pull off Shelby’s famous 1-inch drop, Jason says. “Without exactly the right hole size, the control arm can move slightly and wallow out the hole.” That’s why he first cut a template out of steel. He bolted the template to the shock tower through the stock upper control arm mounting holes. With the steel template fixed firmly in place, he drilled the new 1-inch pair of lower holes with full confidence that they are in the right position.

If you’re looking for an inexpensive way to improve your early Mustang’s handling, check the Shelby drop.

1. Shelby used stock upper control arms, such as this one Jason White bought from Scott Drake. The Shelby trick is to lower them 1 inch.

3. Instead of cutting out a paper template, Jason White cut a template out of 14-gauge steel. He bored two holes in the stock location, and two holes for the 1-inch Shelby drop.

5. Back up the stock upper control arm mounting bolts inside the shock tower with nuts to securely fix the template.

6. Protect your eyes with goggles and use a high-quality—and preferably new—17/32-inch drill bit to bore the shock tower, using the holes in the template as a guide.

7. Boring the holes into the shock tower takes muscle. This is not a 10-second bore. It’s more like a minute. It is easier to use small bits, and possibly a Unibit, to sneak up on the 17/32-inch bit.