We install a Stifflers FIT System on a 2011 Mustang GT

FIT for the Open Road 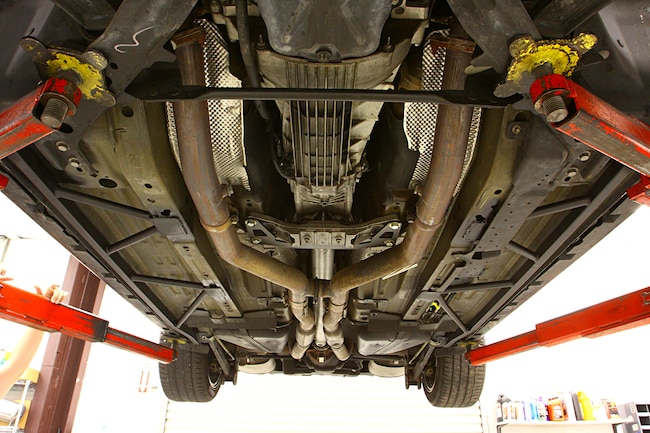 Since the dawn of the Fox Mustang era, one of the very first suggested modifications was the addition of subframe connectors. Subframe connectors tie the front frame rails to the rear frame rails, making the chassis much stiffer. Without subframe connectors, and a lot of power, it wasn’t out of the norm to see street/strip Fox Mustangs with a dent in the roof because of hard launches. Those dents were because of the chassis twisting under hard launches. The Fox chassis, when in a hatchback, and especially in convertible form, was pretty flexible.

Not that adding subframe connectors to your Fox was going to completely solve the problem, but adding them was a great first start. Having driven a Fox GT before and after the addition of sturdy subframe connectors, this author can definitely vouch for the improvement in chassis stiffness realized by adding them. When teamed with other chassis and suspension improvements, subframe connectors can go a long way in keeping your Mustang straight both body-wise and in going down the track.

Taking the subframe connector a few steps further is Stifflers’ FIT System. This system ties the front and rear subframes together like conventional subframe connectors, but it also ties in the rocker panel, forming a “triangulated web of strength and stiffness,” according to Stifflers. The FIT System connects to the lower torque box area to add strength to the lower control arm mount, while the rocker panel reinforcements are designed to increase side impact safety.

Stifflers’ FIT System is designed to allow your Mustang’s suspension to work as intended, increase overall ride quality and handling, and allow for a larger range of suspension adjustment. The FIT System helps your Mustang transfer all the power to the ground, and not waste that energy because of chassis flex.

We recently followed along Coastal Chassis Dyno adding Stifflers’ FIT System to one of its customers 2011 Mustang GT. Stifflers offers the FIT System for 1979-2014 Mustangs, and is currently working on 2015-2017 Mustangs, as well. Check out the photos and captions for the complete story.

1. Here is the Stifflers FIT System for 2005-2014 Mustangs. The FIT System looks a little different for the Fox-chassis cars, as opposed to the S197 chassis design. With the full-length frame rails, Stifflers’ S197 FIT System ties the frame rails to the rocker panels for increased chassis rigidity.

2. Here is a better look at the canvas we’ll be working with for the Stifflers FIT System. This is a 2011 Mustang GT that already features lowering springs and a few suspension modifications. Notice the full-length frame rails we talked about in the previous caption. Coming out of the Fox chassis era, which had front and rear frame rails, the S197’s full-length frame rails added structural integrity previous Mustangs couldn’t touch. However, what is good can always be made better, and that’s where the Stifflers FIT System enters the picture. The FIT System will tie those beefy frame rails to the rocker panels for even more structural integrity.

3. So you won’t have to grind paint off the Stifflers FIT System, simply peel the tape off the welding areas to prep them for installation. Every area needing welding will have tape that you must remove in order to weld the FIT System in place. The only grinding you’ll need to do is to the chassis.

5. Stifflers includes a template to make it easy to properly trim the plastic cover so that it and the FIT System can cohabitate together once the installation is complete. The template is easy, just trace around it, and that will give you the area that needs to be trimmed around the Stifflers FIT System.

6. With the plastic trim cut to fit, Coastal’s Steven Harris sets about loosening the rear lower arm. The FIT System uses the control arm bolt as a mounting point, in addition to all the welding points along the frame rails. The parking brake line mounting bolt must also be removed, as well.

7. Steven puts his Coastal Chassis boss Sam Lippencott to work for a test-fit of the FIT System on the car, and it’s best to have an assistant to help with the install. This is done to make sure everything is set for the final installation because once the FIT System is installed, it’s installed.

10. Steven begins by tack-welding the FIT System in place, and then goes back to complete the welding at each part.

11. With everything welded into place, Steven reinstalls the lower control arms, and retightens the parking brake mounting bolt.

12. Steven applies paint to the welded areas so the bare metal isn’t left exposed to the elements, and reinstalls the plastic fuel line cover.

14. This is what it should look like when the installation is complete. In all, it took Steven and Sam a couple hours to install the Stifflers FIT System. If you start in the morning, you’ll be ready to drive the car to lunch for a celebratory burger. After the install, the car owner reported the biggest thing he noticed was that all the creaks and rattles he had become used to hearing are now a thing of the past with the Stifflers FIT System.