Steeda Autosports’ K-member is designed for the turns 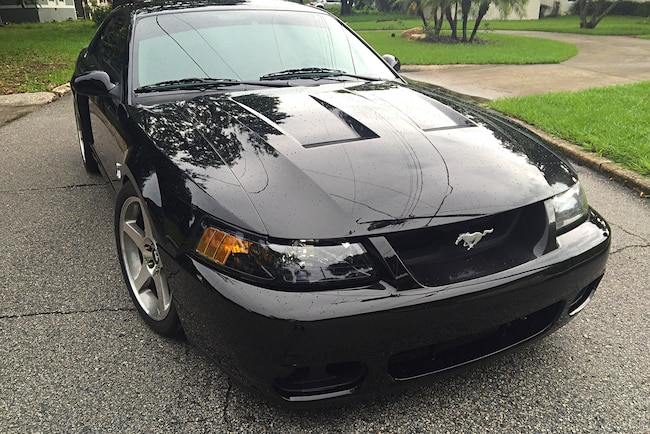 Aftermarket K-members have been the rage for many years now. It’s an easy way to reduce weight over the front end, improve suspension geometry, and make room for long-tube headers. Most aftermarket K-members are designed for the drag market, because Mustang owners want as much weight off the front of the car as possible.

Steeda Autosports already carries a K-member designed for drag racing, but they also have this one designed for road racing. Steeda’s lightweight Mustang K-member ($999.95) is designed for 1996-2004 Mustangs, and it relieves your SN95 of approximately 19 pounds. It’s designed to accept stock control arms, or aftermarket front lower control arms designed for the stock K-member.

This K-member, again is designed for road racing; just looking at it you can see it’s one tough piece. It’s made from 4130 chrome moly and low-allow steel, and it has two front lower control arm mounting points, depending on your Mustang’s ride height. The K-member also allows for changes in Ackerman geometry (more on that later), as well.

Our project car is Clayton Smiley’s 2003 Cobra. Clayton is the original owner of the car, and it’s extensively modified with a built engine, larger supercharger, and a multitude of suspension modifications. Clayton has built his Cobra into a car that can do it all, from road racing to drag racing, and regular street action. It makes roughly 700-rwhp on pump gas, and is the perfect candidate for Steeda Autosports’ K-member.

1. An up-close look at Steeda’s K-member reveals its sturdy construction. Even with that construction, Steeda’s K-member removes 19 pounds off the front end. Steeda says its K-member was, “designed to shed some weight from the front end without requiring a full suspension replacement or requiring modified geometry.” The K-member is made from a mix of 4130 chrome moly and low alloy steel, and it’s designed to be used with either stock control arms, or control arms meant for a stock K-member.

2. First things first, in order to swap out a K-member, you must have a way of supporting the engine and transmission while you do the swap. You can remove the engine and transmission, and replace the K-member at that time, or drop everything out of the bottom, and swap it over that way, as well. Steeda’s Steve Chicasola used this engine support to enable the installation to take its course.

3. Of course, with a K-member install, the front suspension must be completely dismantled. Here you can see Steve has removed the brake caliper, rotor and spindle, and disconnected the sway bar. Clayton’s Cobra already features an aftermarket tubular K-member, but he wanted some adjustability, and a more street/open track-oriented unit. The Steeda K-member perfectly fit the bill.

5. Steve now turns his attention to the engine mounts, removing the attaching nuts so the K-member can be dropped out from the bottom. Then all he has to do is loosen the bolts on the side and back, and drop the K-member out of the car.

9. Clayton had 2-inch drop spindles on the car prior to the K-member installation. However, with the adjustability the Steeda K-member offers, he decided to reinstall the stock spindles, and go to a different lowering spring.

10. Clayton also had Maximum Motorsports front lower control arms on the car prior to the Steeda K-member install. We were able to reuse these control arms since they’re a stock-style item. Steve installed new bushings into the arms and mounted them to the upper hole in the control arm pocket. If you notice, Steve uses the upper mounting hole for Clayton’s Cobra, because of his car’s lowered status. If your Mustang is at stock ride height or less than 1-inch lower, use the lower hole, but for those 1- to 2-inches lower, use the upper hole. This helps to fine tune its roll center.

11. With the front lower control arms mounted, Steve reinstalls the steering rack, sway bar, and the spindle and hub assembly. The Steeda K-member is adjustable to make changes to the Ackerman geometry. “Ackerman is a steering geometry principle that determines the correct angle of the tires for taking a corner,” says Steeda’s V.P. of Operations, Glen Vitale. Basically, having correct Ackerman geometry means the inside wheel and tire is turning at a tighter radius compared to the outer wheel and tire in a turn. If the inside tire and the outside tire are at the same angle, the inside tire will slide, making for less-effective handling in the turns. When turning in a circle, the front wheels and tires should make their own circular marks parallel to each other. Steeda says, “Ackerman adjustment is a must for the serious road racer.”

12. Steve finishes up the install by reinstalling the brake rotor and caliper, and reattaching the steering shaft.

13. With all the reconfiguring on Clayton’s Cobra, the car is put on Steeda’s alignment rack to straighten out the car’s new setup. Matt Boyea gets the alignment back into spec before we head for home.

14. Well, there you have it. With Steeda’s K-member, Clayton says the car feels, “More solid, more planted, you might say.” He also enjoys increased hood, header, and steering shaft clearance with the Steeda K-member. “The most unexpected difference is that ground clearance has been less of an issue. Speed bumps that I used to be cautious of, I have noticed less need to creep and zag,” Clayton adds. He looks forward to enjoying his Cobra even more with the Steeda K-member, and even tackling an open track event in the near future.