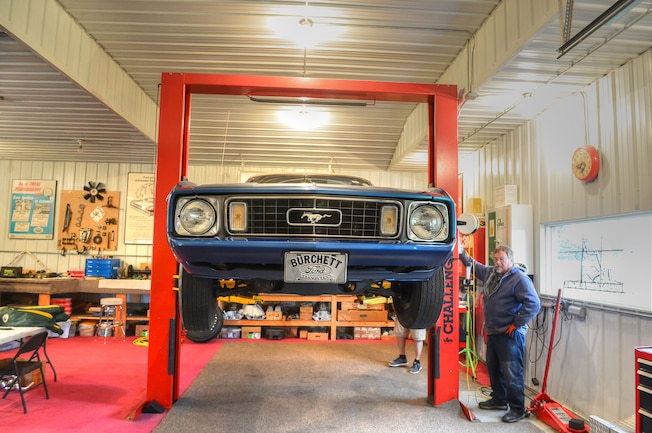 Anytime you need work on the suspension on anything under a Mustang you have to lift it in the air, whether on a floor jack or a lift. But what you might not have ever heard is that raising a 1965-1973 Mustang on a regular two-post lift without a support between the upper control arm and the frame rail will damage the shocks and strut rods. There’s no telling how many times over the last 50-odd years of lifting a Mustang for a simple oil change that possibly has broken shock and strut rod bushings. The numbers must be in the millions.

Ford supplied dealers with a factory service tool, which they also used on the assembly line, to support the front suspension. Without this support, lifting the car drops the front suspension down and places all that weight on the front shocks and strut rod bushings. This damage is much more than cosmetic. The car will now be unstable at speed, more or less depending on the severity of the damage. Maybe one gentle lift will not result in visible damage, but with multiple unsupported lifts, the damage gets worse.

Bob Perkins of Perkins Restoration (www.perkinsrestoration.com) showed us how to avoid busting out shock tower and strut rod bushings when raising a Mustang on a conventional, two-post lift—or any lift with side arms.

01. This 1973 Mustang front suspension drops and “hangs free” when raised on a two-post lift. This lift picks up the car with arms at the side for access to the undercarriage.

03. Because original support tools are scarce, Bob Perkins has fabricated his own for everyday use. On the left are two supports he made. On the right is an original Ford support tool from the 1960s.

04. This illustration from Ford’s 1965 Mustang shop manual shows where to place the support tool when lifting a Mustang on a lift with side arms. The shock is inside the coil spring on top of the upper control arm.

05. The Perkins-built suspension tool, as seen on this 1973 model, fits between the frame rail (bottom) and the upper control arm under the ball joint. To install, first lift the car enough for the tool to fit.

06. Bob Perkins shows us damage to this shock on a car that was lifted without a support tool. The suspension dropped down and tore the rubber bushings in the top of this original shock.

08. On 1965-1970 Mustangs, the shock bushing at the top is apt to break when the suspension falls without support.

09. Likewise, the shock bushings in the 1971-1973 shock tower will have to absorb the weight of the front suspension if the support tool is not used.