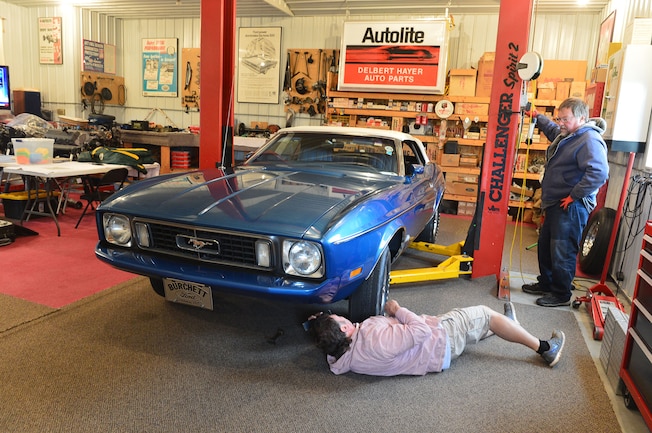 Unless you’ve just rolled the car on the interstate, the underside of a classic Mustang is hidden from the world. But the chassis and suspension are a huge part of every restoration and can make or break a car being judged. Here, we find the unibody, springs and shocks, tie rods, rear axle, brakes, framerails, and other functioning parts that allow a car to stop and go and bounce up and down with the undulations of the road. Some of these parts are bare metal and others are plated, while springs, shocks, and even drive shafts are striped with various colors. When restoring an undercarriage, all these details can be put back to factory original. That’s why raising this Mustang on a lift is a siren call for restorers, especially with an untouched, 200-mile original 1973 convertible, such as the one owned by Jose Luis Abraham of the Dominican Republic, seen here.

Way back in 1987, we began showing details in this magazine of undercarriages of original and restored Mustangs at Bob Perkins’ shop in Juneau, Wisconsin. Although those articles were very well received, they have led to unexpected and somewhat bizarre consequences. Restorers began copying color codes instead of researching their specific cars. Copying a reference Mustang is like using someone else’s toothbrush; you might be okay, but you won’t know until later.

Instead, a restorer has to either read the paint colors on the car’s original build sheet or inspect the paint on the original part that came on the car from the factory. The very reason for paint codes is to assist assembly-line workers in their selection of a part from a parts bin. Instead of hunting part numbers, the worker picked up a coilspring, for example, with yellow and green paint, as listed on the car’s build sheet.

It’s nice to hunt these color codes, either on the original part or on the build sheet, and add these colors to the part in a restoration. However, the hobby has literally gone wild over paint codes on undercarriages. Judges today are seeing Mustangs with a gaudy assortment of incorrect paint codes splattered about undercarriages in a clownish manner.

The irony is that MCA judges do not deduct points for the lack of a color code, but they will deduct points for an incorrect color code. In his role as MCA technical advisor and full-time restorer, Bob Perkins goes so far as to say, “Paint codes are more important to some restorers than having the correct part on the car, which they put the paint daub on.”

“They think if they got a bunch of circus markings on a car, even if the car is really restored nicely,” Perkins says.

What is important for judging and correctness is to put the car together the way it was originally built. That’s why we will focus on factory procedure and finish. Did assembly-line workers apply overspray body color on top of the sound deadener, or vice versa? Was a certain part bare metal or plated?

To answer these questions, Bob Perkins raised this untouched original Mustang on a two-post lift in his shop to show us the important details of a stock undercarriage that apply to 1971-73 model Mustangs. Note that specific procedures can differ depending on the assembly plant, such as the “Dearborn Slop Gray” paint on this Dearborn-built 1973 model. However, application of primer, sound deadener, and paint are the same for 1971-1973 Mustangs.

01. Other than normal surface oxidation, the undercarriage of this 1973 convertible is a good reference for other 1971-1973 Mustangs.

02. Before raising a Mustang on a two-post lift with side arms, insert this special tool between the frame and the underside of the upper A-arm to prevent front suspension damage to shock and strut-rod bushings.

03. A look inside this front wheelwell reveals the factory procedure—primer applied first, followed by a sound deadener, and finally a blue body color, which is overspray from painting the exterior of the car. The disc-brake rotor and caliper are bare steel, installed after the car was painted.

04. The assembly-line workers installed the coilspring after the body color, as well as the coilspring cover, which the factory dipped in “Dearborn Slop Gray” paint prior to installation. Yellow-and-green paint stripes on the coilspring are coded to this specific car per the build sheet.

05. In the front wheelwell, the three steering gear bolts and washers, plated “phosphate and oil,” are unpainted, as are the metal lines. The blue overspray has soaked into the sound deadener, which has more of a black appearance now due to age.

06. Another detail inside the front wheelwell and specific to a 1973 Mustang is this bumper-bracket bolt bearing a lime-green paint mark. This bolt fixes the 5mph impact-absorbing front bumper, first offered in 1973, to the front framerail.

07. The rear wheelwell reveals primer applied first, followed by sound deadener, and body color overspray. The body color is shiny on the framerail. Body color has soaked into the sound deadener and now appears a duller shade of blue. The fuel line is unpainted, as is the brake assembly, rubber bumper, and gas tank. The rear drum assembly is bare metal. The 28-spline rear axle is accented with a violet paint mark.

08. Judges have to look hard to see green paint in the threads of the wheel studs. Lock tabs on the base of the studs are phosphate and oil.

10. The rear axle is a sub-assembly, meaning already assembled and painted semi-gloss black before installation. W24 is a code from Ford’s Sterling Axle Plant in Sterling, Michigan, and consequently, does not appear on the build sheet.

12. The shock plate that secures the U-bolt to the axle is bare steel. The nuts on the bare steel U-bolt studs are zinc dichromate.

13. Rear brake backing plates are sub-assemblies. One side of a Mustang can be Bendix and the other side Kelsey-Hayes, or any combination. The rubber plug covering the brake adjustment hole is an “8A2092,” typically indicating Bendix. Smooth plugs with no letters or numbers are typically used on Kelsey-Hayes units. Just to the right of the plug are orange and bluish-green paint stripes on the bottom of the brake backing plate, which is semi-gloss black.

14. The top of the brake backing plate, which is semi-gloss black, shows an orange slash on the pin that holds the retracting springs on the other side. One most important detailing feature judges look for is getting the correct wheel cylinder, which for 1973 has a 3/8-inch bleeder valve, whereas 1965-1972 Mustang have a 1/4-inch bleeder valve.

15. This original shock has a red paint daub (in this case the red daub stands for standard suspension). A heavy duty or competition suspension would have an orange daub on the shock. Also visible is an orange paint mark on the rear brake drum.

16. The number 951 on this original paper tag pasted to the axle tube near the leaf spring U-bolt matches the car’s original metal tag bolted to the differential housing.

17. The metal tag on the differential housing reveals a 2.75:1 rear axle ratio. The 951 is on the bottom right, but we can only see the first digit of 9 without removing the tag.

18. The parking brake cable is bare steel with an orange paint identification mark.

19. Caulk at the bottom of the rear quarter panel is black primer with a slight blue overspray that is very hard to see. Note the two black rubber plugs in the quarter panel.

20. This plate in the middle of the undercarriage is a brace that is unique to convertibles. Painted “Dearborn Slop Gray,” this plate was applied after the car was painted. Bolts with integral washers are “phosphate and oil” finish.

21. On the passenger side rear frame rail this round bare steel mark is a true “birth mark.” A round pad secured by a bolt attached the unibody to the factory skid on the car’s start down the assembly line. Judges also will note near a small hole to the left a pair of blue dots that are visible after 45 years because this part of the metal is bare, whereas the rest of the metal is covered with sound deadener.

22. Here’s another bare steel “birth mark” on the driver’s side rear of the frame rail where a round pad blocked application of primer, sound deadener, and body color paint overspray. Note the blue overspray near this bare steel round mark.

24. This photo shows how as the sound deadener fades into the floor pan the blue overspray looks darker. Body color is more prevalent close to the edges of the car.

25. Judges check the U-joint for a grease fitting. The factory installed U-joints without a grease zerk on all 1965-1973 Mustangs, as seen here.

26. Visible in holes on either side of the front semi-gloss black cross member are bare metal strut rods. The large strut rod washers, unique to the 1973 Mustang, are also bare metal with yellow paint daubs.

28. The front of the third member (aka center section) is red oxide primer. The nuts are zinc dichromate. The studs are phosphate and oil.

29. Body color overspray decreases towards the center of the car. Note the driveshaft is bare metal with red identification. The gas and brake lines are bare steel. The clips and fasteners on the lines are phosphate and oil. And the sound deadener in the tunnel of the car is black with no blue overspray.

30. In the center of the car, right in front of the gas tank, there is very little blue body color overspray and no blue behind the frame rail.