With Over 200,000 miles on the Odometer, Our 2001 Mustang Bullitt Screamed for a Suspension Upgrade 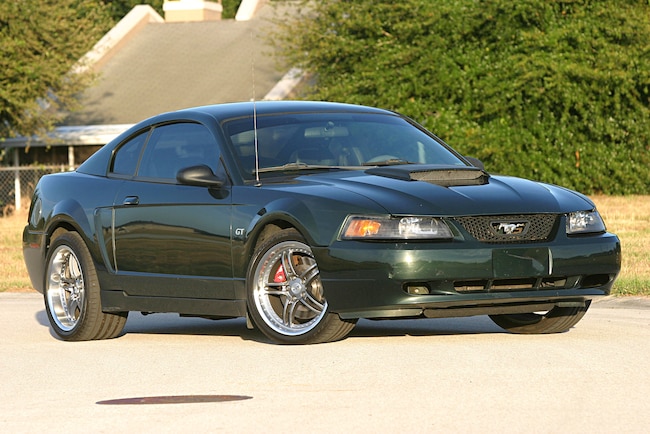 New Edge Mustangs have been gaining in popularity for the last few years. They are plentiful, inexpensive, and just as easy to modify as previous generations. The knock against most New Edge cars is that they came with the lowly Two-Valve 4.6 modular engine. What’s worse, most New Edge Mustangs, like those that came before them, were beat into submission, leaving them in rough shape.

Case in point: the 2001 Bullitt this author picked up in 2015. It had close to 200,000 miles on it, and we don’t think any of those miles were spent babying it around town. We found it on Craigslist, and as you know, most CL finds have been abused or neglected in one way or another. Ours had coolant stains all over the engine compartment and the underside of the hood, which told us the car had overheated in a big way. The seller told us he ran the engine low on oil, and that it overheated. He also stated the engine starting making noise at that point.

Therefore we knew an engine swap would be in order upon purchase, but we already had one on hand from our buddy David Squire, and our other buddy David Piercey from David Piercey’s Mustang Performance would help us out with the engine swap. After a bit of price negotiation, we exchanged green for green and towed the Bullitt to Piercey’s shop north of Tampa.

We performed the engine swap in just a couple days, but addressing some of the Bullitt’s mechanical problems took a few days, which added to the time until the Bullitt was running and driving. The previous owner told us he had changed out the car’s shocks and struts relatively recently, but our first drive in the car begged to differ. The rear shocks were shot. Any bump larger than average caused a loud bang as the rear axle hit the pinion snubber. It was painful to hear, and each bump made us cringe because we knew what was coming.

It was an issue we knew had to be solved, but how would we go about fixing the problem? Yeah, we knew the car needed new suspension components, but which ones to choose was the predicament.

Our answers were just a few Late Model Restoration (LMR) website clicks away, and we were in business. LMR has several suspension kits available, and the line of SVE components perfectly fit the bill. We chose LMR’s 1994-2004 Mustang SVE lowering spring/KYB shock and strut kit. At just $415, even by itself it would solve our Bullitt’s suspension shortcomings.

LMR’s SVE lowering spring/KYB shock and strut package includes springs made in America to LMR’s exact specifications. The front springs are linear rate 571 lb/in examples, while the rear springs are progressive rate 200/251 lb/in. The KYB shocks and struts are what KYB calls Gas-a-Just units, which are designed to provide a firmer ride and additional control.

However, why stop at just improving the car’s suspension? Even if we did those things, our Bullitt’s big hips would still hide the factory wheels and tires out back. We needed to remedy that issue as well, but which wheels to add was now the question. Within the Bullitt community, stepping out of bounds from a wheel standpoint is a no-no. We didn’t want to upset the Bullittheads with our choice, but we wanted to bring our Bullitt up to date.

To gain the desired contemporary look, we chose LMR’s Series 2 wheel kit in a staggered 18x9/18x10 fitment. The Series 2 wheel is a direct fit for 1994-2004 Mustangs and was the perfect addition and complementary design to our Bullitt’s exterior. The Series 2’s gunmetal finish, polished lip, and split-spoke design, we felt, presented a contemporary twist on our Bullitt’s original wheels without stepping too far outside the norm.

Once we had everything replaced and installed, our Bullitt’s suspension no longer possesses cringe-inducing handling characteristics. Instead, it is compliant, stout, and handles everything we throw at it on a daily basis.

1. After we installed the LMR SVE suspension components with the Series 2 wheels and Falken treads, our Bullitt’s handling is much improved. With the new suspension, going over large bumps no longer comes with a loud bang. The suspension, along with wheels and tires, accomplished exactly what we needed for our Bullitt. Now it is time to get the rest of the exterior to match the car’s newfound handling prowess.

2. Here is what you get when you order the LMR SVE 1994-2004 Mustang lowering kit/KYB shock and strut kit. This kit is just $415, so if your SN95 or New Edge Mustang suspension needs to be lowered, or if it’s simply worn out, this kit is the perfect addition. This kit is designed to reduce your Mustang’s ride height from 1 to 1 1/2 inches. The kit is applicable to basically every New Edge Mustang, except of course 1999-2004 Cobras with an IRS setup.

3. Besides the new suspension components, we wanted to dress up our Bullitt’s wheel and tire package at the same time. The wheel design we felt more closely resembled the original Bullitt wheel is LMR’s Series 2. We also chose the staggered fitment with an 18x9 up front and an 18x10 rear. With the New Edge Mustang’s big hips, if you will, an 18x9 out back would be swallowed up by the car’s quarter panels, so we opted for the wider 18x10 Series 2.

4. To go on the LMR Series 2 wheels we added Falken’s K453 treads. We have used the FK453s in the past and had a great experience, so going with this time around only made sense. The FK453 is Falken’s ultrahigh-performance summer tire featuring noise-absorption technology to make for a comfortable, quiet ride. Our Mustangs are usually outfitted with aftermarket exhausts, so they are loud enough on their own. We need our tires to be quiet, so we get the most out of our pipes. And even though the FK453 is known as Falken’s summer tire, its silica-enriched compound is designed to inspire confidence in both wet and dry conditions. Available in a variety of speed ratings, the FK453 features nylon-reinforced layers for optimum high-speed stability. Thanks to the FK453’s wide array of sizes, we were able to find the perfect stagger for our Bullitt with a pair of 265/35s up front and 285/35s out back.

5. We will start up front with the suspension rejuvenation by removing the factory tire and wheel. We will have to loosen the front struts at the top and bottom, and we are also replacing our Bullitt’s front lower control arms. The control arms’ ball joints were shot as well, and making a bunch of embarrassing racket. We were able to score a pair of low-mileage control arms from our friends Travis Smith and Troy Raby from Southeastern Foxbodies. Donnie Salem from Boosted Performance had the control arms at his shop, and he was able to send them to us. The control arm swap added a little time to our installation, but it was necessary to get rid of the embarrassing ball joint squeaks.

6. Our buddy Jeff Scofield did the majority of the heavy lifting on the suspension install, since your author had to hold the camera. Scofield is no stranger to working on Mustangs, or cars for that matter, and easily handled the suspension install. Here he is loosening the front struts at the top. We also had the advantage of using air tools, which certainly come in handy when doing this install.

7. Moving back down to the wheel well, Scofield loosened the strut nuts and bolts from our Bullitt’s spindle so he can remove it. We can let the lower control arm and spindle assembly hang until we are ready to remove and replace the control arm. Just make sure the spring doesn’t come out at you when you remove the strut. Our spring took a little extra motivation before it could be removed, but beware: Not every car will be this way.

9. With the spring removed, we set about removing the lower control arm. Scofield has also loosened and persuaded the steering rack out of the way so we could remove the control arm bolts.

11. The important aspect here is to get the spring installed correctly; there is a pocket in the control arm where the spring goes, and you have to line up the spring as shown here. We also transferred the spring isolators onto the new springs.

12. Ironically, our Bullitt had KYB struts on it from the previous owner. The struts were still in relatively good mechanical shape, but we replaced them anyway just to be safe.

13. With the strut bolted in at the top and bottom to the spindle, you can just see where we used a high-reach jackstand to raise the lower control arm to attach the strut onto the spindle. If you are flat-backing this installation, you can use a floor jack to accomplish the task, but again, make sure the spring is safely in place, or attach a strap to the spring so that it doesn’t come flying out of place while you are raising the control arm.

14. With the front end handled, we moved on to the rear. To access the upper shock nut, you need to remove the trunk side liner. With the liners removed on each side, the shock nut is exposed, and you can begin the disassembly.

15. Scofield’s son Tyler gets in on the act removing the rear shocks from the car. Besides being attached at the top inside the trunk, the lower part of the shock attached right behind the lower control arm, and you will need a ratchet and wrench to remove the shock’s lower nut and bolt. Notice the rear spring is still in place. The shocks must be removed to make it easier to remove the springs.

16. With the shocks removed, pull down on that side of the rearend, grab the spring, and simply pull it out.

17. Installing the new springs is the exact opposite of removing them. To install the spring, pull down on that side of the axle, perhaps the brake rotor, and push the spring in place. Notice we have tie-wraps holding the spring isolators in place both on top and bottom; while this isn’t a must, it will prevent the isolators from falling out during the installation.

18. Lastly, use the stock nuts and bolts and attach the new shocks the same you removed them. It is easier to tighten the shock at the top and then raise the rear end with either a floor jack or, like in our case, a high-reach jackstand, to get the shock’s bottom side to match up with the rear axle. Tighten up the last bolt, and you are ready to get back on the road with a fresh look and feel for years to come.