Clip Your Mustang: What it takes to install a Total Control Weld-In Front Subframe Kit 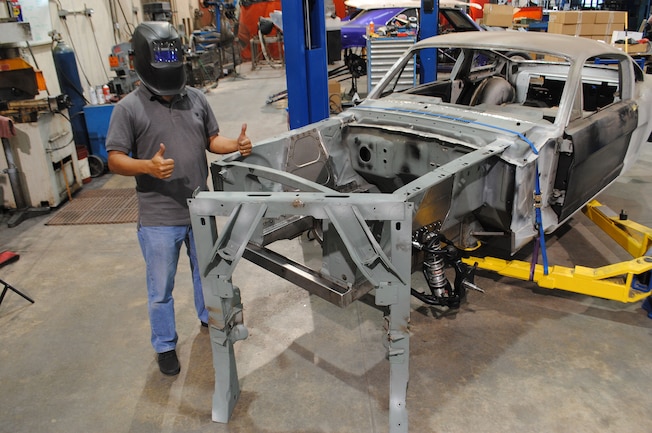 When it comes to classic pony cars, there are two kinds of owners: Those who restore and those who drive. This article is aimed at those who drive. It’s for the guy or gal who likes to get out behind the wheel and let that pony run free, preferring a nice performance driving experience, even if it means irreversible modification to the car.

Truth be told, modifications to collector’s items like a 1965 Shelby G.T. 350 are ill-advised, but Ford made one heck of a lot more six-cylinder and base (two-barrel) V-8 Mustangs than they did Hi-Po 289s, Boss 302s, or 428 Cobra Jets. Given the propensity to clone a Hi-Po, Shelby, or Boss, why not combine the classic muscle-car looks with some modern underpinnings? Time and technology have marched on since Lee Iacocca and his band of merry men first introduced the Mustang to the world back in 1964. Why not apply some of that technology to a classic Mustang and transform that flexi-flier into a serious g-machine?

Right from the factory, early Mustangs were blessed with classic good looks, but that doesn’t mean they had everything going for them, or what was good back in 1965 compares to what is possible in 2016. Don’t believe us? Run down to your local Ford dealer and hop in a new Coyote-powered Mustang. The retro-modern styling might not find favor with diehard classic enthusiasts, but the performance sure will. From the variable-cam, 5.0L power plant to the impressive ride quality, handling, and braking, a modern machine is head and shoulders above anything offered back in the original muscle-car era.

What enthusiasts often want is a classic Mustang with modern suspension, braking, and propulsion and that is exactly what Total Control Products from Chris Alston’s Chassisworks can provide. To illustrate how to modernize a classic Mustang with one of Total Control’s weld-in firewall-forward subframe clips, we ventured up for a visit and photo shoot with the experts at Chassisworks.

You might be asking yourself, why go to all the trouble of a complete front clip? Why not simply install the usual array of shocks, springs, and sway bars (the three Ss) and revel in the newfound handling prowess? It is possible to improve upon the factory handling of a classis Mustang with those parts, but making it better than stock is like stepping up from the sound quality of an 8-track to a cassette. Like music delivery, suspension has come a long way and installation of the proper suspension components (and geometry) requires starting from the bottom and working your way up.

We will cover the suspension installation later, in part two, but for proper operation the suspension must be bolted to a rigid chassis that maintains its integrity under heavy loading. The lightweight, thin-wall, factory frame rails and sheet metal stampings are not optimum for strength or integrity. This, of course, assumes they haven’t been warped or damaged over time and abuse. But even in perfect condition, their strength (and geometry) pale in comparison to the clips offered by Total Control Products.

To illustrate how to install one of their front clips, we followed along during the installation on a 1966 Mustang fastback. In an attempt to combat the inherent flexibility of the early Mustangs, the owner had previously welded in Total Control Products sub-frame connectors, so this installation used the firewall-forward front clip. The clips for early (1964-1970) Mustangs are also available with sub-frame extensions. The great thing about the new front clips is that they are considerably stronger than their factory counterparts (thanks to FEA design that increased height and thickness of the framerail), they allow installation of a multitude of different TCP suspension systems (to meet your wallet and handling needs), and they also provide the necessary room and engine mounting for popular engine swaps.

Thanks to removal of the factory shock towers and available motor mounts, the engine bay is wide open for that big-block FE or super-wide 5.0 Coyote. As eager as we were to get the trick suspension installed, every performance build has to start with a solid foundation. We’re not going to provide a bolt-by-bolt guide to the clip installation here, but rather, give you an idea of what’s involved so you can determine: a. if you want to go that far in modifying your car; and b. if you have the skill and equipment to do it yourself.

Check out the photos of the new front clip and check back with us next time as we install the new control arms, spindles, and coilovers, along with massive front brakes and a trick front sway bar to make this early classic a serious driver!

01. Looking to make a serious driver out of your flexi-flyer? Start by replacing that flimsy frame with a new front clip from Total Control Products.

03. An underside view shows one of the clips in place on an early (1964-1970) Mustang chassis. The weld-in clip is available from the firewall forward (as shown) or equipped with integral sub-frame connectors.

04. The blue portion of the photo represents the new section included in the front clip installation. Note the shock tower delete panels designed to increase the room in the engine bay for a variety of different engine possibilities.

05. The weld-in front clip (with sub-frame extensions) can be combined with the available Sub-frame G-Connector and Direct-Fit cross member for the ultimate in chassis strength.

08. You must begin with a completely bare chassis—all components forward of the firewall removed. The floorboard areas of the interior must also be cleared to avoid risk of fire while welding.

09. If the car has torque boxes installed, the triangular gusset must be removed by drilling out the spot welds. A replacement gusset is provided. The torque box structure can remain in place during the rest of the installation.

11. Several measurements are taken and the frame marked in various places prior to cutting.

12. The framerails are cut away after making triple-sure the measurements are correct, using a cutoff wheel, Sawzall, plasma cutter, or torch. Make sure there are some support stands under the rails to hold them in place while cutting.

13. Before the final cut, remove the two bolts in the alignment tabs mentioned earlier (you can see them remaining, spot-welded to the inner fender) to allow the frame to drop out of the way.

14. Here’s the stock frame at the firewall with the front rails removed. Drill three holes according to the instructions to allow factory-style spot welding when the new TCP subframe is slid into here.

15. Raise the new subframe assembly into position. Factory production tolerances mean that the framerail position will vary between vehicles, so this may require minor working of the factory rail.

16. Once the rear of the subframe is raised completely into position, re-install the bolts through the alignment tabs. Since the tabs never moved, you know the front-to-back location of the new subframe is just as it was stock.

17. This shows the TCP subframe fully welded into place. Now, you can see why the three holes were drilled in the stock frame—for penetrating spot-welds.

18. After we cut and removed the original subframe, the new Total Control Products frame rails were inserted into the factory rail openings and welded in place. Check out the quality of the welding on the TCP rail. Were it not for rust, we would be tempted not to cover up this kind of workmanship. This frame gusset and torque box is for more overall strength.

Cool Features of the TCP Subframe

Now that you have an idea how the subframe is lined up and welded into place, here are the things that make it nice in any Mustang meant for real performance driving.

19. A great deal of engineering went into creating a universal mounting structure that would accept a variety of different motor mounts.

20. Viewed from below, these motor mounts were designed to allow installation of a modern four-valve Coyote into the early Mustang chassis, with plenty of room for headers no less.

21. With the factory front clip and shock towers, available clearance would be limited, but the new front clip from Total Control Products allowed easy installation of a four-valve Coyote motor (and modern trans). Room for headers or even changing sparkplugs is limited in the early Mustangs equipped with an FE, 351 Windsor, to say nothing of an engine swap. However, the new mounts and lack of shock towers provided plenty of engine room for the notoriously broad-shouldered mod motor.

22. These two shots illustrate the adjustability in the steering rack mounts (and design).

23. Proper fitment, steering geometry, and strength were insured with these male and female locating slots for the billet aluminum steering rack mounts.

24. The front clip features provisions to spot-weld the factory sheet metal back in place.

25. The frame included a lip to weld the radiator support back in place.

26. The shock tower delete panels are also spot-welded in place then seam-welded to the L-angle mounts attached to the framerails.

27. The large gap in the delete panels (to allow suspension movement) is filled with these trick rubber splash flaps. The splash flaps and delete panels came pre-drilled to accept the supplied mounting hardware.

28. The quality welding carried over to every seam on the new clip, including the anti-roll bar mounts. With the new front clip in place, it was time to install the suspension and make this Mustang a real driver!

29. Check back in for part two when we show how to install all these Total Control Products suspension goodies!