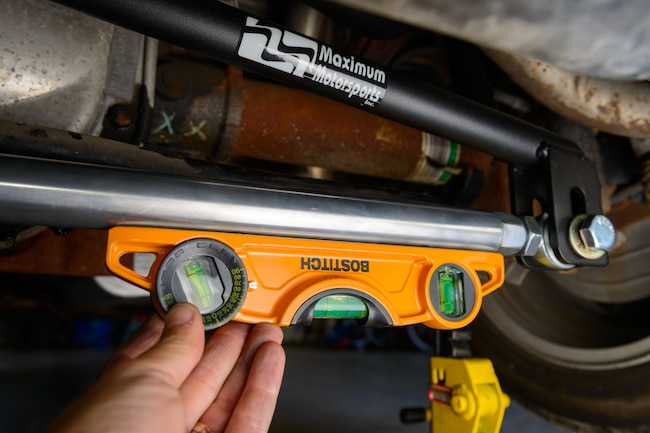 Location, location, location. This popular real estate adage also applies to Mustang solid-axle rear suspensions. The 1979-2004 Mustangs are saddled with a lackluster quadra-bind rear suspension layout that is riddled with compromises that rear their ugly head as soon as the road gets twisty (Figure 1). The upper control arms are angled and have two jobs: locate the axle left-to-right, and maintain the pinion angle as the rear axle articulates.

Sounds like a good plan—in theory. But while going around a corner, the axle stresses the upper control arms’ bushings as they work to keep the axle centered under the chassis (Figure 2). Additionally, the rear suspension’s geometry also tries to twist the axle in different directions when the axle encounters a bump. These two behaviors make the rear end of our beloved Mustang unpredictable, or squirrely, when we’re cornering aggressively.

The control arms also dictate the rear suspension’s roll center (Figure 4). The roll center height affects how the rear tires are loaded relative to one another, which affects the handling balance of the car.

A high roll center creates a higher jacking force on the chassis and jams the outside tire into the pavement while trying to lift the inside tire. Why does this matter? Tires generate lateral grip relative to vertical force in a nonlinear fashion (think: diminishing returns). A lower rear roll center spreads the cornering load more evenly between both tires, which gives the rear more total grip.

The problem gets worse when a Mustang is lowered. The front roll center goes down, and the rear roll center gets higher. The Mustang gets tail-happy. Other geometry issues mean your Mustang becomes an unpredictable, no-handling ox cart.

The Panhard bar from Maximum Motorsports lowers the rear roll center dramatically, placing it at the intersection of the car’s centerline and the Panhard bar (Figure 5).

To get a taste of how this Panhard bar can benefit a solid-axle pony, we installed the kit on a 2004 Mustang GT convertible with completely stock suspension. We were rewarded with better rear axle behavior with no increases in noise, vibration, or harshness. The benefits of “location, location, location” can never be underestimated!

01. The Maximum Motorsports Panhard bar kit for 1999-2004 solid-axle Mustangs features all the hardware for a complete bolt-in installation and a stiff aluminum rod with PTFE-lined spherical rod ends.

02. Before jacking up the car, we used a plumb bob to measure the distance from the wheels to the fender lips so we could replicate the alignment after installation.

03. With the front wheels on ramps, we supported the chassis level to the ground and the rear axle with jackstands. (After removing the wheels, we stored them under the floorpan to save us in case the car fell off the jackstands.)

04. We began the installation by removing the lower shock bolts.

06. With the control arm out of the way, we removed the nut retaining the left-side lower shock mount.

07. We fitted the Panhard bar axle mount into place with the supplied hardware.

08. Because of Ford’s wide production tolerances, we encountered a misalignment of the rear lower control arm bolt holes. The instructions suggest a combination of filing and bending the rear axle shock mounting pad.

09. We found it easier to elongate the holes in the Panhard bar axle mount with a file to gain the necessary fit.

10. After we elongated the holes, the supplied (longer) bolt slid through.

11. We temporarily reattached the control arm to the axle and installed the supplied lock nut.

12. To gain the necessary clearance for the next steps, we removed the top shock mounts and the shocks.

13. We raised the axletube until the control arms were level.

14. The Panhard bar should be as close to parallel with the rear axle as possible, so we took measurements. With a plumb bob hung around the rear edge of the left axletube, we noted the distance between the string and the inside edge of the front Panhard bar mounting tab.

15. Next, we lifted the Panhard bar chassis mount into position.

17. With the position finalized, we transferred the location of the chassis mount holes to the framerail.

18. Using a sharp 1/8-inch drill bit, we drilled pilot holes at our marks through the outer framerails.

19. Drilling the outsides of the framerails, we found that using a stepped drill bit saved us tons of time and frustration. It drills sheetmetal quickly and easily without grabbing the metal and twisting the drill out of your hand.

20. With the holes enlarged to 5/8 inch, we measured the depth of each hole in the framerails with a caliper.

21. The Maximum Motorsports Panhard bar kit includes innovative frame insert tubes. These make the bolt-in installation robust and secure because they prevent the thin framerail sheetmetal from crushing together when the chassis mount bolts are tightened. We transferred the depth measurement to the insert tubes with the caliper.

22. We trimmed the frame insert tubes to the appropriate length with a reciprocating saw.

23. With the frame insert tubes clamped into place, we drilled through the inner sides of the framerails with a 3/8-inch drill bit.

24. With the chassis mount back into position and three bolts holding it into alignment, we drilled through the inner tabs of the Panhard bar chassis mount with our 3/8-inch drill bit.

25. The framerails on our car were thinner than the brackets, so we used the supplied shims to fill the gap.

26. After we drilled the holes, we installed the bolts and torqued them to 47 lb-ft.

28. When we got back, we put the front wheels on ramps and the rear axle on jackstands (so the rear suspension would be at normal ride height). Using the supplied 5/8-inch bolt and washers, we installed one end of the Panhard bar into the axle mount.

30. To allow the Panhard bar to be level at varying ride heights, the chassis mount is slotted. Because our Mustang is at the OEM ride height, the bar was level at the slot’s bottom position.

31. With the bar level, we torqued the Panhard bar bolts to a face-shaking 115 lb-ft.

32. After verifying that the rear axle was the same position as our measurements before installation, we tightened the rod end jam nuts.

33-34. After the Maximum Motorsports Panhard bar was installed, our Mustang tracked more predictably in heavy corners and had a lot more grip before breaking loose. Also, the axle seemed more settled over midcorner bumps. We were also pleased that we didn’t notice any increase in noise, vibration, or harshness.

The Maximum Motorsports Panhard bar chassis mount is compatible with tailpipes that follow the OEM routing, which, according to Maximum Motorsports, includes Dynomax, Flowmaster (made after 2000), and Late Model Restoration. The following brands require significant modifications to fit: Flowmaster made before 2000, Bassani, Borla, and MagnaFlow. Our OEM tailpipes cleared the chassis mount without any drama.