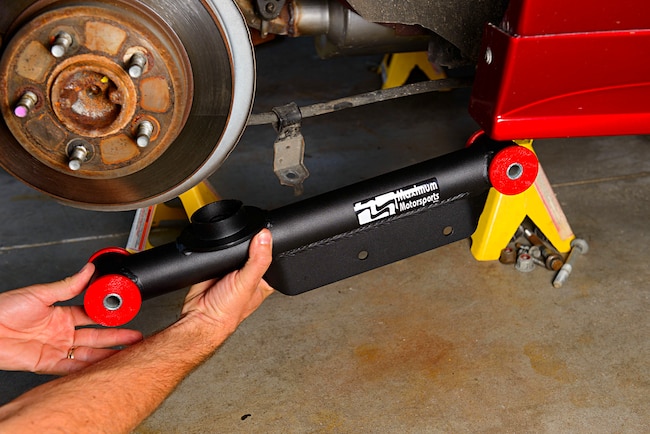 Enthusiasts sometimes have different priorities than the engineers who design the cars we enjoy. Cost, noise, and performance are all factors, but enthusiasts and engineers may put these factors in a different order.

Looking at the OEM 1979-2004 Mustang lower control arm’s stamped-steel construction and huge rubber bushings, it is clear that the engineers designed them to be inexpensive and to keep road noise and vibration away from the chassis. With that in mind, the OEM lower control arms do their jobs well. But performance was an afterthought.

As is the case with many Maximum Motorsports products, the control arms fit like a glove. The control arms gave our car more “bite” under acceleration, and the axle felt more settled under braking. Even though the polyurethane bushings flex significantly less than the soft OEM equipment, during normal driving we didn’t notice any increase in noise, vibration, or harshness. The Maximum Motorsports Sport Series Lower Control Arms were a perfect enhancement for our convertible cruiser.

2. The three-piece bushings on both ends feature a thinner, harder polyurethane bushing in the center sandwiched by two softer outer bushings. This allows the harder inner bushing to transfer acceleration and braking forces to the chassis more directly but still allows the control arms to articulate when going around corners, saving the delicate sheetmetal torque boxes in the chassis from damage.

3. The Sport Series control arms also feature grease fittings on both ends so that, should the need arise, the bushings could be lubricated without disassembly.

4. We began the installation by jacking up the rear axle and supporting the chassis on jackstands.

6. With the rear of the control arm supported by a jack, we removed axle end fastener from the lower control arm.

7. We used the jack to slowly lower the control arm and release the compression on the rear spring so it could easily be removed.

8. With the spring extracted, we removed the control arm mounting bolt from the chassis end and dropped the OEM control arm.

9. With the control arms removed, we could compare them to the Maximum Motorsports Sport Series lower control arms. Note that the OEM arm’s flexible stamped steel construction and large, squishy rubber bushings.

11. To pull the cable free from the caliper, we first removed the retaining clip.

12. With the end of the cable free, we flipped the cable support bracket around and slipped it back onto the cable.

13. Now we were ready assemble the bushings into the Maximum Motorsports Sport Series lower control arms. We used the supplied waterproof grease to coat all of the bushing surfaces. (Tip: if you don’t have any disposable gloves, mineral spirits easily remove the grease from your fingers.)

14. The edges of the bushing tubes are machined with a radius to eliminate damage to the bushings and greatly ease installation.

15. Next, we raised the Maximum Motorsports control arm into position and slid the chassis end bolt into place.

17. We used the jack to raise the control arm until we could pass the axle end bolt through the bracket and bushing.

19. Before reinstalling the sway bar we pried off the OEM nut clips with a screwdriver.

20. We reattached the sway bar and parking brake cable support bracket using the OEM bolts and the supplied nuts.

21. Under hard acceleration we could feel the Maximum Motorsports Sport Series lower control arms giving our Mustang a harder “bite” on the pavement. In First gear our stock 4.6L 2V engine struggled to break traction, but when it did the tires regained their grip in a smooth, progressive manner.