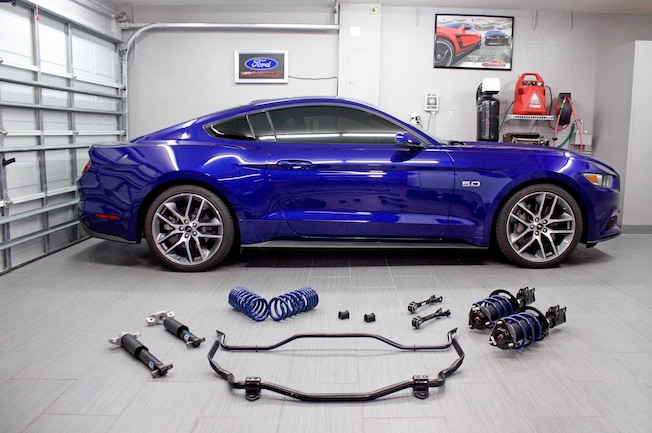 Mustang owners are constantly after ways to improve appearance, power, and performance, and one of the first things on the to-do list is often a set of lowering springs. The dropped look is a no-brainer—lowering your Stang gives it an aggressive look, and you benefit from improved handling and braking too. But altering the factory suspension settings can have a negative result if all the parts don’t work in unison. Mismatched spring, shocks/struts, and even tires can reduce traction and give you nervous steering.

Sticking with a proven system of parts is the first step to getting it right. In this case we wanted to drop our 2015 Mustang GT and get some tighter handling, so we turned to Ford Performance for a Street Performance Handling Pack (PN M-FR3A-MA), which sells for just over $1,000.

“The factory Performance Pack handling option satisfies the needs of most Mustang enthusiasts looking for improved street performance and occasional track use,” says Jesse Kershaw of Ford Performance. “This kit includes the Performance Pack antiroll bars, struts and shocks, and toe-links, but we went one step further with this kit by adding our ‘X’ lowering springs that drop the car about 1-inch and improve handling beyond the Performance Pack. Our kit gives any Mustang an aggressive stance that looks great and drives really nice. Since the Performance Pack was only available in limited quantities from Ford, we’re offering a suspension kit with all the hardware to deliver great performance at an even greater value. For the hardcore track-day warrior, we recommend the Track Package Handling Kit (PN FR3A-M8), which offers even greater performance and maximum handling but sacrifices a little comfort as a daily driver.”

When you crack open the boxes for your Street Performance Kit, you’ll find everything you need to complete the job, including front springs that are already mounted to the front struts. This saves you the hassle of finding a spring compressor. However, while this is a bolt-in kit, it requires a fair amount of skill, either a floor jack and jackstands or a vehicle lift, and of course you need an assortment of tools.

Our tester was a beautiful Deep Impact Blue 2015 5.0 Mustang backed with an automatic transmission. At the point of installation, it was 100 percent stock, right down to the factory 20-inch wheel option. And while the wheels looked good, we were excited to cut the gap between the tires and the fender lips.

To complete the installation, we hooked up with Dennis Ramsey of Ramsey’s Performance, located in Lutz, Florida, just north of Tampa. Dennis Ramsey is a longtime Mustang racer and shop owner, who has built everything from 8-second drag cars to road racing rockets and show winners. His shop also offers dyno tuning on its in-ground Dynojet chassis dynamometer.

In addition to Ramsey’s vast drag racing history, he has added American Iron road racing to his resume, so he knows a thing or two about handling. We were confident our Mustang was in good hands. After a few hours of wrench spinning we had a GT that was sitting low and tough. When Ramsey set the Mustang on the ground, the initial drop was 3/4 inch, but after a week of driving, the springs settled and the overall drop was just under the advertised 1 inch.

As we mentioned, the Street Handling Pack utilizes many of the factory Performance Pack parts, combined with the FP springs. This gave us an aggressive stance, but it didn’t ruin the ride quality. We noticed a slightly stiffer feel, but the IRS continues to soak up bumps and imperfections in the road. It does it so well that we’d still consider it perfect for daily driving.

1. We were excited to install the Ford Performance Street Handling Pack, which is designed to lower 2015-present Mustang by 1 inch.

3. We headed to Ramsey’s Performance in Lutz, Florida, for the installation. Dennis Ramsey has been modifying and racing Mustangs since the early Fox-body days. His facility is equipped to handle any type of installation or build, and he utilizes an in-house chassis dyno for tuning. Ramsey got started by removing the wheels and tires from our GT.

5. Ramsey removed the bolts connecting the lower portion of the struts to the spindle.

6. He also unbolted the front antiroll bar endlinks where they attached to the struts.

7. The Mustang was then lowered, and Ramsey unbolted the three nuts retaining each strut.

8. With the struts out of the way, he disconnected the antiroll bar endlinks.

10. Unlike earlier Mustangs, where the antiroll bar can be removed from underneath, on S550 (2015-present) models it must be fished out from the side.

11. The Street Handling Pack antiroll bars are stiffer than the stock GT bar but equal to the Performance Pack model. Therefore, Mustangs that originally came equipped with the Performance Pack option only need to purchase the M-5300-X Street Lowering Springs to achieve the lowered ride height. Or, for more extreme handling, you can upgrade to the Track Handling Pack (PN M-FR3A-M8).

12. The Ford Performance front struts come with the spring installed, so they are ready to go right out of the box.

13. Ramsey slipped the struts into the wheelwells and attached the three nuts (per side) under the hood. And extra pair of hands is helpful for this process.

14. Ramsey installed the lower strut bolts and then he torqued the nuts retaining the strut to the strut tower.

15. Next came the antiroll bar endlinks, along with the rotors and brake calipers.

16. Moving to the back, we prepared to remove and then swap the rear antiroll bar, shocks, springs, and toe links.

18. He then supported the IRS frame with a pole jack and removed the lower shock bolts.

19. He removed the bolts retaining one side of the IRS frame. This would provide clearance to remove the rear springs.

20. The springs could then be pulled out. The Ford Performance Street Handling springs are designed to lower the center of gravity and provide a 1-inch drop to the body.

21. Before installing the new springs, we made sure to swap the rubber dampers from the old springs.

22. We then removed the old shocks and installed the ones from Ford Performance.

23. We reinstalled the bolts retaining the IRS frame.

24. The Street Handling Pack comes with new rear toe link bars. We marked the adjusting bolt before removal in order to get the rear toe close when we installed the new bars. Nevertheless, Ford recommends getting a four-wheel alignment after the kit is installed.

25. Swapping the toe link is easy; just be sure to realign the mark before tightening the bolt.

26. Ramsey installed the supplied bushings for the rear antiroll bar and he slipped the bar into place.

27. Lastly, he installed the end links for the bar. We were ready to hit the road!