How to Make a Ford Fiesta ST an Autocross Animal 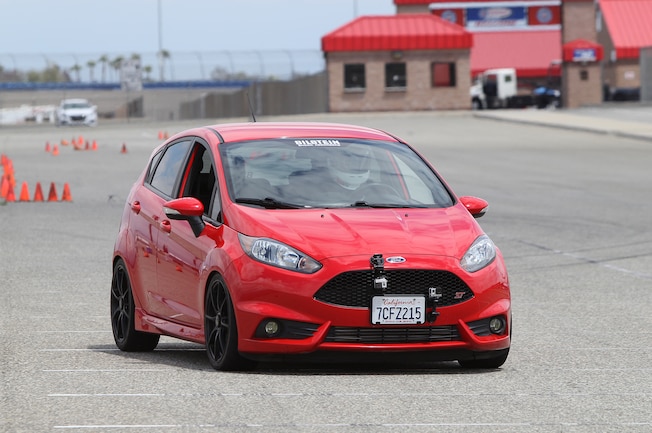 It can be hard for many diehard Blue Oval enthusiasts to grasp how anything less than eight cylinders could be fun. But Ford’s ST team has been on a mission to change that outlook for some time now. The result of their tireless effort, the Fiesta ST, is one seriously fun little car.

While it will never run with its Coyote-powered older brother, the Mustang, on the dragstrip, if you throw some twists (or better yet, cones) in front of the pint-sized brawler it will have even the most begrudging of naysayers grinning from ear to ear.

While the car is certainly fun in stock form, as gearheads we are not too great at leaving well enough alone. To amplify our Fiesta’s handling fun and take it to the next level of cornering capability, we needed a more track-focused suspension. To that end, we turned to Bilstein for a set of B14 coilovers and to Toyo Tires for some sticky rubber. We loaded the ST onto a lift in the tech center and set to work on our plan to shrink the car’s autocross times. Follow along in the captions for the nitty-gritty on how the new suspension was installed.

To test the Bilstein coilovers and the new Toyo R888 rubber, we took our ST out to an autocross put on by Speed Ventures, the same course layout we had run several times when the car was stock. While the car was fun and pretty competitive before, after the first lap it was clear the ST was a new animal. Initial turn-in was sharper than ever, necessitating only the slightest tap of the brake pedal before diving into turn one, and midcorner grip was drastically better. Also, the car’s left-right transitions in the slalom were much quicker thanks to substantially decreased body roll. The car felt more planted, more nimble, and was all-around quicker in every section of the course.

Yet one of the most notable improvements in the car’s handling dynamics was how the new stiffer springs and revised damping kept all four feet firmly planted on the pavement, whereas previously it had a tendency to pick up the rear inside tire about 4 inches off the ground.

“Our goal with our suspension is to give the car as much traction as possible so you have the most grip,” says Jose Gonzalez, Bilstein Segment Product Manager, Tuning/Performance. “That tire pickup is usually on really stiff spring rates that don’t match the shock. We tune our springs and shocks together, not separately.”

We can only imagine that without suspension improvements, sticky rubber would have further exacerbated the tire-lifting phenomenon.

Overall, the radically improved suspension was worth just over a second, which in the world of autocross is a lifetime. The car’s time dropped from 37.05 to 35.95, and it is important to note that it was also much more consistent to drive with the increased grip threshold. We know there are even better times locked away that will come with more seat time in the new setup.

The Fiesta ST has a lot of character, which is ultimately the reason it received such a warm welcome when it showed up at dealer lots across the country. However, with character come quirks. For all of its zippy, corner-loving demeanor, the Fiesta ST rides like a cement mixer on bumpy roads. It is a rare circumstance indeed, but the addition of coilovers to the car actually made the ride significantly more compliant on the street. The larger monotube pistons in the Bilsteins—an upgrade from the factory’s twin-tube setup—easily absorb large dips and undulations in the road.

“These particular springs are progressive on the back and linear on the front,” says Gonzalez. “That’s what our engineers decided to go with. We tune to the vehicle, and don’t apply the same philosophy to every application. It really depends on the suspension design and the car.”

At the end of the day we had a car that handled substantially better on track and, better yet, was entirely tolerable on the street. Where most suspension upgrades come with a compromise of ride quality to performance, we are happy to say this one was the best of both worlds. There will be plenty more autocrosses in this little car’s future before the Toyo R compounds are used up. And now we’ve got a lap time to beat.

01. Up went the lift and off came the old suspension parts in a hurry as we prepped our hot hatch for track and autocross duty.

02. After unbolting the swaybar links, shop tech Christian Arriero removed the two bolts holding the factory strut to the knuckle.

03. Be sure to detach this ABS sensor line from the strut before removal, Bilstein includes a new bracket to hold it in place.

04. To get to the driver-side upper strut bolts, the brake fluid reservoir will need to be unbolted and set off to the side.

05. With the reservoir out of the way, untighten the three nuts on each side holding the struts into the car. The whole removal only takes about 30 minutes with a suspension this simple.

06. The Bilstein coilover system reuses the hats from the factory struts so they will need to be disassembled with a spring compressor.

07-08. There is an Allen key recessed into the shock rod that allows you to hold it stationary while loosening the hat retaining nut. But we didn’t have an open-end wrench deep enough to do the job, so we welded a length of round stock to a socket. It worked perfectly. A crow’s-foot socket set would work too.

09. Here are the completed Bilstein coilovers with factory strut hats installed. We set the initial ride height in the middle of the adjustment range to start, but will fine-tune it when the car is on the ground.

10. Arriero then slipped the new Bilstein coilover into place in the car.

11. The studs were aligned into the holes in the strut tower and the nuts reinstalled.

12. Next, the knuckle bolts were put back and tightened.

13. This plastic ratchet clip slips over a welded stud on the new coilover and rigidly holds the ABS sensor wire in place.

14. The rear suspension install is incredibly simple. After the shocks are unbolted from the twist-beam axle, the suspension droops far enough that the factory coil springs drop out of place.

15. We adjusted the coil spring seats to the middle of their range, measuring both sides to make sure they were equal.

16. Arriero slid the new springs and seat adjusters into the original spring pocket, paying special attention that the coils were indexed properly into the factory pocket stop on top. Two 10mm bolts hold the factory shocks into the unibody of the car. Again, the factory hats need to be removed and reused with the Bilstein coilovers.

17. An impact wrench easily knocked the nut off the stock shocks, allowing us to transfer the hats over to the Bilstein units.

18. The new shocks were reinstalled in the car and the lower bolts to the axle tightened.

19. We rolled our Fiesta ST up on the lift and used an alignment kit from Quick Trick to dial the front end back in with the new suspension.

20. Around the autocross course, the new suspension felt more planted and also cured the car’s tendency to pick up the rear, inside tire in corners.

21. The Bilstein coilovers and Toyo rubber did wonders for turn-in and midcorner grip!

How do you test a suspension to the absolute limit of sanity? You run it on the infamous Nurburgring Nordshleife course. As a major sponsor of the track dubbed Green Hell, Bilstein uses Germany’s most famed corners as a means to develop many performance suspensions, including the Fiesta ST’s.

But track testing isn’t all that makes this suspension kit perform. “The [B14] coilover kit changes the factory twin-tube shocks for a monotube design, which has a larger-diameter piston at all four corners compared to the factory setup,” says Jose Gonzalez, Bilstein Segment Product Manager, Tuning/Performance. This gives better control and more tune-ability. It handles higher forces better and has better cooling.

Lastly, Bilstein builds all of its shocks to OE quality, and they are an easy swap, using factory-mounting points.

To complement the Bilstein coilovers, we chose to run race-grade rubber from Toyo Tires. The R888 lineup is a DOT-approved competition tire that maximizes traction for any given tire size. Our Fiesta ST has a very small wheel opening that is not particularly welcoming to larger tires. For that reason we chose to use the factory tire size of 205/40/R17. We knew the sticky rubber would help the car perform, but we were still surprised at how well it worked for such a small tire. We already have 6,200 street miles on the car since the swap, and there is plenty of meat left to race with!

Overview on Crower shaft-mount rockers, including options and when you need them.

Rebuilding a T-5 Five-Speed Part 2: Putting It Together

T-5s are still plentiful and fairly cheap to convert your classic to manual overdrive or to build a fresh trans for your Fox Mustang.