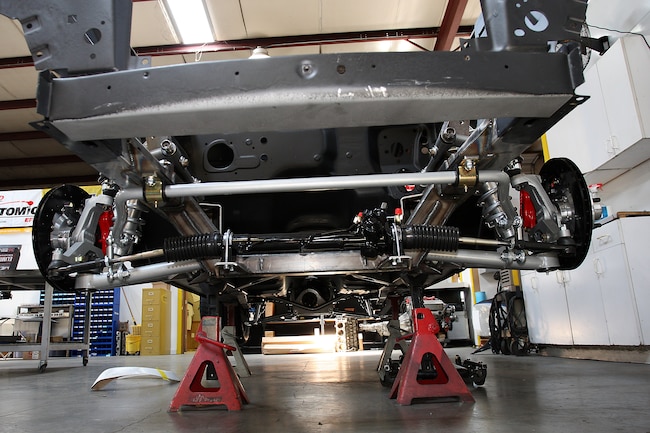 There’s a reason why the restomod trend has been going strong for years and shows no sign of abating—few things in life are cooler than great looking classic iron that rides and drives like a modern sports car. After all, while many modern cars look good, practically nothing can compare with the magic that is a classic Mustang.

So we are always interested when we see innovative manufacturers come up with ways to make our beloved Mustangs handle better and perform more ferociously on the track. Recently, chassis and suspension specialist Heidts introduced their second-generation Pro-G independent front suspension system for 1964½ through 1970 Mustangs with several updates over the original system.

Among other changes, the Heidts suspension has been massaged so it can now accommodate Ford’s high-output Coyote engine, and it is said to include everything you need to get up and running. It is designed with a 58-inch track width and ships with some pretty high-end Wilwood brake components. Actually, this is one of the most complete kits we’ve seen. Besides the usual upper and lower control arms, spindles, and the already mentioned brakes, Heidts’ kits also includes adjustable coilover shocks, springs, a re-engineered crossmember, an anti-sway bar, and a rack-and-pinion steering system.

Prestige Motorsports in Concord, NC, has begun a very cool Mustang build project featuring a Heidts Pro-G suspension setup front and rear. One of the coolest parts of this particular project is instead of modifying an existing Mustang, they are actually adding a new one to the world’s population—they’ve started with new metal from Dynacorn and are building a 1968 Mustang from scratch.

Because they aren’t cutting up original sheet metal, the crew at Prestige wasn’t concerned about welding in Heidts’ new independent suspension at the front and rear; along with a few other choices the customer requested that might make purists raise an eyebrow. In fact, while we were photographing the front suspension install, Prestige’s engine shop was finishing up plans for a 582ci big-block Chevy with a 300 shot of nitrous that will be capable of pushing out over 1,000 horsepower that will power this particular pony. They said that’s what the customer wants, and the customer is always right.

But that’s a story for another day. What we wanted to show you is the Heidts second generation Pro-G front suspension system and the installation process as Prestige’s L.J. McCleary got it all in the car. Since this is a new Dynacorn car just going together there aren’t a lot of (or any, actually) components or other systems getting in the way. Here, you can see what’s going on and decide if this is something you might want in your Mustang.

01. Prestige Motorsports still has a ways to go with their scratch-built 1968 Mustang fastback, but the Heidts second generation Pro-G independent front suspension looks great and is ready to rock.

02. Because Prestige started with new Dynacorn steel, they were able to skip several steps you will need to take if you are updating an existing Mustang (the Heidts kit will work on all models from 1964½ up to 1970). These include removing the engine and transmission, wheels, brakes, shocks, steering box, lower control arms, and the crossmember. Finally, you will need to cut out the lower control arm mounts and shock towers. In this photo, the sheetmetal for the shock towers has already been cut away, leaving a large opening for the Heidts components to fit.

03. The first new components to be installed are the shock tower saddles, which weld to the frame rails. Everything else on the kit zeroes off of the location of the saddles, so it is critical that these are installed in the correct locations.

04. After grinding away the e-coat to reveal raw steel, Heidts has you make a vertical mark on both frame rails exactly 24 1/4 inches back from the very front of the frame. This is the spindle centerline.

05. Prestige’s L.J. McCleary positions the shock tower saddles. Each has a vertical slot, which you can see here, that should be centered over the mark made on the frame rail. The various bolt holes cut into the saddles should also align with existing holes in the frame rails.

06. Of course, over time cars get wrecked and fixed, and they rarely wind up exactly as before. Plus, the crew at Prestige wanted to confirm that the new Dynacorn sheet metal is correctly assembled, so they also checked to confirm the pieces are square with the rear end. McCleary did this by drawing a line on the shop floor parallel to the rear axle. Then by dropping plumb bobs from the same position on the shock tower saddles he can confirm both sides are the same distance from the line and the suspension is square.

07. Finally, McCleary is ready to tack in the saddles.

08. The fabricated K-member slides in next to fit up against the saddles and the upswept section of the frame rails near the firewall. There are slots cut into the ends of the K-member that fit over the slots in the saddles. If all the slots line up, you know the K-member is in the correct location and square, and it is also ready to be tack welded into place.

09. Both the upper and lower control arms are constructed from steel tubing instead of stamped from sheet steel for better strength and rigidity. The ball joints are also provided. All that’s needed for the lowers is to add a little anti-seize to the threads and screw the ball joint into the socket in the control arm.

10. Here’s a shot of the upper control arms, with the arm on the right assembled and ready for installation. Unlike the lower control arms, the ball joints on the uppers use four bolts to secure them in place.

11. The upper control arms bolt to a bracket on the back of the shock tower saddles. The system is designed so that you can use shims between the bar on the control arm and the bracket to increase negative camber and slugs in the slots where the arms bolt up to control caster. Right now, McCleary has no slugs installed as he’s just mocking everything up.

12. The lower control arms slot into brackets welded into the K-member. All the necessary fastener hardware is included, and Heidts sends along nylock nuts to ensure that they won’t loosen from road vibration. If you are going to pre-fit everything up first, like we are, set the nylocks in a safe place and only use them on final assembly so you don’t wear the nylon ring.

13. When installing the spindles, set them on the lower ball joint first and thread on the castle nut. Once it is secure, attach the upper control arm and ball joint.

14. Here’s the reason McCleary pre-fit everything to this point. Once the spindles were on, he bolted up the fenders and mocked up a set of wheels and tires to make sure the wheels were centered in the fenders and there were no scrub issues.

15. Now all those suspension components that we’ve been bolting on come right back off so that McCleary can weld up both the shock tower saddles and the K-member to the frame rails. Notice that Heidts conveniently cuts extra slots into the saddles so you can be certain they are welded plenty secure to the frame rails.

16. After everything is welded up, all the suspension components can go back on—this time permanently. Next up, McCleary bolts the heavy duty billet steering arms to the spindles using red Loctite to make sure the bolts stay put.

17. The brakes that Heidts include with the kit are 11-inch smooth rotors with black four-piston calipers. Prestige went with an upgrade Heidts offers for this particular kit and got a pair of drilled and slotted rotors with red, four-piston calipers to supply the squeeze. We’ve got to admit the polished aluminum hubs look pretty sweet.

18. The brake pads are included in the kit. Several shims are also offered to make sure the calipers are properly centered over the rotors, but in our case everything went together just like it should.

19. Viking adjustable coilover shocks are standard. Here, McCleary assembles the shocks on a workbench before installing them on the car. Make sure to use some lubricant on the threads so that the adjuster cup won’t gall to the shock body. For now, just snug up the adjuster so there’s no slack on the spring. You can worry about setting ride height once everything is complete.

20. Aluminum spacers keep the shocks centered in the upper mounts. When installing the shocks, make sure the adjuster knob points inward so that it can be easily accessed without having to remove the wheel.

21. These heavy steel mounts weld to the frame rails in front of the K-member and are used to mount the sway bar.

22. Here, you can see the sway bar in place as well as the steering rack, which Heidts also includes in the kit.

24. Here’s a view of the completed assembly from below.

25. The Heidts Pro-G kit is installed and practically ready to go. The crew at Prestige Motorsports will button up the last bits, like brake lines, after the chassis undercoat has been applied and the car painted. There is still a ways to go until the car is complete, but it is obvious excellent first steps have been taken.