S550 Tech: BMR Suspension Takes the Slack Out of the IRS 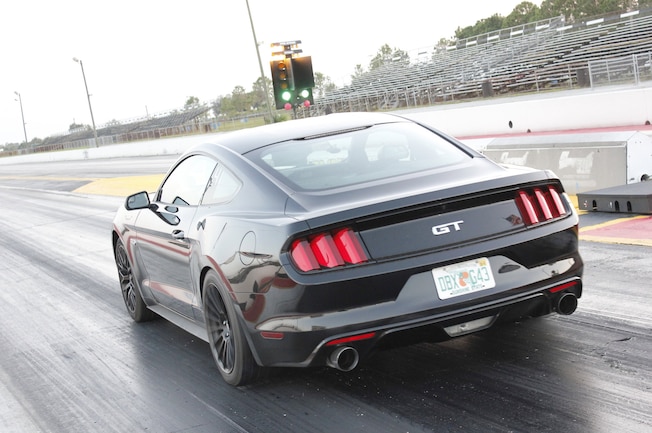 The new S550 Mustang’s chassis is without a doubt the pinnacle of the evolution of the breed’s chassis. Not only is it the first truly from-scratch, model-specific platform our favorite Pony has ever had the luxury of being perched upon, but it’s also the first ever to have an independent rear suspension (IRS) as standard equipment.

Now some of you just groaned reading that. The Mustang was the last muscle car left that was still equipped with a solid rear axle, and there are those who wish that was still the case. We’ll grant you, it’s hard to beat a solid axle when it comes to hooking high power on a dragstrip repeatedly without breakage. It’s also easier to get traction and easier to control wheelhop since the wheels are solidly linked together. An IRS has definite benefits when it comes to ride quality, especially over bumpy and uneven surfaces, and even on the road course. But when it comes to drag racing, it takes some special tuning.

Not long after the S550 debuted, BMR Suspension got ahold of a development car and concentrated on creating parts that would remove the IRS issues for guys and bring back the quarter capability with a minimum amount of work. The even better news is that the parts BMR developed not only improve hook and eliminate wheelhop but even offer benefits on the road course. And when properly equipped, there’s no sacrifice in ride quality or dramatic increase in NVH.

1. Ford actually did an excellent job in designing this new system and provided a great platform that can be dialed in for racing while retaining the benefits of IRS. Removing the rear subframe is pretty straightforward. The exhaust, brake calipers, shocks, and driveshaft get pulled and the sway bar endlinks and ABS sensors disconnected. Four bolts hold the subframe in place, and the differential will stay in place while the cradle comes out. Yeah, we’re breezing over the disassembly, but don’t worry; BMR’s instructions are very complete and illustrated.

2. The differential is held into the cradle with four bolts. To remove it, the spindles must be removed to remove the half-shafts. In this process the toe rods and vertical links are also removed. We also removed the lower control arms to swap their bushings.

3. The stock rubber bushing with large voids are great for absorbing NVH but do nothing for performance. The quickest and easiest way to remove the differential and cradle bushings is to make a cut in the side of each with a Sawzall. Be sure to cut only through the outer case of the bushing and not the bushing socket of the cradle.

4. With the cuts allowing the bushing to crush inwards on itself, a few solid whacks with a dead blow hammer will push out the bushing and outer sleeve.

5. Here’s the BMR replacement bushing next to the original. BMR’s version doesn’t rely on a metal cup to hold the bushing material; the poly is stiff enough to just be squeezed into the socket of the IRS cradle.

6. Before attempting to install the new bushings, make sure to clear the socket of any debris or any burs from the steel.

7. The BMR bushings simply slide into place, though they may need some taps from the dead blow hammer. The diff bushings have a zinc coating sleeve that slides into each bushing. They will slide in, but a little lubricant makes the job easier.

8. The differential bushings are larger and may take a bit more effort to extract, so multiple cuts may be needed. Just like the cradle bushings, be careful not to cut the socket the bushings sit in.

9. The differential bushings are constructed similarly to the cradle bushings. This kit is using BMR’s poly option, but a much more aggressive billet aluminum lockout kit is available if increased NVH isn’t an issue.

10. Just like cradle bushings, the differential bushings are likely to need some persuasion into the socket. The steel inserts will need a bit of lube to slide in.

11. Here’s what the differential bushings look like fully installed into the cradle.

12. With a jack to help you get the case back into place, the differential can be torqued back into place. We used an impact to get it mostly there, and then torqued the bolt to spec.

13. The rubber bushings in the lower control arms get swapped out for spherical bearings for zero deflection. They are simply pressed out of the arms and the bearing gets pressed in. BMR will soon have a bushing removal tool available (sold separately) so this can be handled in the garage.

14. To take up the slack, a billet spacer is used. The smaller-diameter side indexes to the bushing.

16. With the spindle reinstalled, BMR’s vertical links, with preinstalled spherical bearings, can be installed.

17. Using a transmission jack and some muscle, the cradle was reinstalled in the car. With the cradle bolted up, the BMR toe rods are installed. Set the length to the factory length as a starting point, and tune from there. The female rod end side goes into the cradle side using the lockout plates on each side and supplied hardware. The fabricated end goes onto the spindle with supplied hardware.

18. Everything bolts right back up like stock, but now our S550 IRS will function even more precisely without the sloppy stock bushings. Due to eliminating the eccentric bolts and solid-mounting the cradle, a rear wheel alignment is required before testing.

19. With the suspension back in the Mustang, BMR took it out for testing at Bradenton Motorsports Park. A Lund Racing nGauge was used for data logging the front and rear wheel speed versus rpm. All of the testing was done on 295/30R18 Mickey Thompson ET Street Radials with 2015 Mustang Track Apps (Line Lock and Launch Control) used to keep testing consistent (3,000 rpm launch for every run with Advanced Trac turned off).

20. How well does it work? Check out these two graphs. The first rough one represents the wheelhop BMR recorded during launch testing on the stock bushings.

21. The second, much smoother one represents the same launch but shows dramatically less oscillation after the installation of the BMR poly bushings. That means more power is being transferred efficiently to the ground.