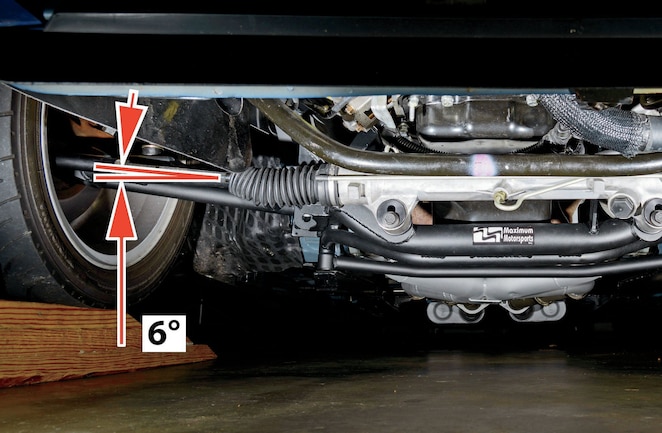 “Make it lower” is near the top of any serious Mustang modifier’s to-do list. Besides a road-hugging stance, lowered suspension puts a Mustang’s center of gravity closer to the pavement for improved handling. So lowering a pony is good, right?

Sadly, it’s not all sunshine and lollypops in lowered Mustang land. If your goal is carving corners, a slammed steed’s wonky front suspension geometry could make it handle worse than if you’d just left it alone.

But have no fear. The aftermarket is here. The relentless Mustang geeks at Maximum Motorsports have a solution to improve the front suspension geometry of your lowered Mustang, as well as put it on a diet. These are two things every Mustang owner can appreciate. The MM treatment includes a new front crossmember (called a K-member), an oil filter relocation kit, tubular front control arms, adjustable tie rod ends, steering rack bushings, and a sway bar relocation kit. Follow us as we make one of the portliest 1979-2004 Mustangs, a 2003 Cobra, more nimble on its feet.

2 The Maximum Motorsports K-member changes a Mustang’s suspension geometry to aid cornering grip, including raising the front control arm’s inner pivot points. This moves the suspension’s roll center to a reasonable height, which makes life better in a number of ways. Raising the roll center reduces the amount the outer ball joint moves toward the center of the car as the suspension compresses, which increases “negative camber gain” and reduces tire scrub (how much the tire moves side-to-side during suspension movement). To a degree, a car is also more responsive and requires softer springs with a higher roll center height.

3 After we took a few reference measurements, including ride height and front camber, we disassembled the front suspension. Our car already had a Maximum Motorsports coilover kit installed, which simplified the process.

4 After disconnecting the steering shaft, we removed the steering rack from the K-member and hung it from the sway bar with zip ties.

5 Before we removed the OEM K-member, we supported the engine using a fixture we built. Maximum Motorsports includes drawings on how to make one out of steel, but we devised this method using some wood, and hung the engine from the pulley bridge. Whatever method you use, make sure that you can support the heavy engine because the consequences are dire.

6 We used a floor jack and a plank to support the OEM K-member, removed the eight bolts holding it in place, lowered it to the ground, and rolled it away.

7 We lifted the Maximum Motorsports K-member into place with our floor jack.

8 On our ABS-equipped Mustang, we had to carefully reform the brake lines for clearance around the front edge of the K-member.

9 The K-member bolt holes are slotted so it can be squared to the chassis. To check the alignment of the K-member, we dropped a plumb bob from the rear suspension mounting bolts.

10 Then we dropped our plumb bobs from the holes in the K-member.

11 We used a pair of tape measures to compare the distance between the plumb bobs and our marks at the rear until they were within 1/16 inch of being equal front-to-back (A and B), and within 1/8 inch crosswise (C and D).

12 Another integral part of the Maximum Motorsports front suspension is the company’s tubular control arms. We opted for the standard offset arms. They place the wheels 3/4 inch forward in the wheelwells for improved geometry and weight distribution but don’t require modifications to the inner fender liners.

13 Buyers can choose between polyurethane or Delrin bushings for the control arms. We first installed the former, and did a comparison test with the latter (see the “Delrin Bushings” sidebar). After lubricating and inserting the bushings into the control arms, we torqued them to the K-member. (Note: The front fasteners feature a rounded Torx head that prevents damage to the steering rack boots.)

14 On engines with the factory oil cooler such as our 2003 Cobra, the K-member interferes with the oil filter. So we needed to install the Maximum Motorsports oil filter relocation kit. It includes everything you need, including a new Motorcraft FL-1HP filter.

Maximum Motorsports offers two bushing options for its control arms: Polyurethane and Delrin. Firmer control arm bushings “give” less when the suspension is under load for better grip and response (good), but also transmit more harshness to the chassis (bad). While polyurethane bushings are considerably harder than the OEM rubber bushings, the Delrin bushings are machined from a solid block of polyoxymethylene (a hard plastic).

Swapping the bushings was as easy as pulling the Polyurethane bushings out and sliding in the Delrin replacements. Even though the Delrin bushings are considerably less compliant than the polyurethane ones, there was an almost imperceptible difference between the two.

So while in theory the Delrin bushings might be a poor choice for a street-driven car, we decided to try the two bushings back-to-back. The results were a bit surprising. The only difference between the two bushing materials was a slight increase in impact harshness with the Delrin bushings. Hitting pavement seams felt more like a pop than a thump. So, while the two bushings were difficult to tell apart on the street, Delrin is significantly more durable than polyurethane. Says Chuck Schwynoch at Maximum Motorsports, “The Delrin bushings will last much longer than polyurethane, especially under track use. The primary wear point of the urethane bushings is the flanges, which take a beating under braking. The heavy braking done in one weekend of track use is probably as much as is done in a year of street driving. Delrin holds up very well to this; urethane does not.”

Our conclusion: If our car was 100 percent street-driven, we would keep the polyurethane bushings. For our mixed street/track/autocross application, Delrin gets the nod.

15 The remote filter mount attaches to a bracket that’s bolted behind the front bumper. Using the bracket as a template, we drilled the required holes. Since the bumper is made of hard alloy steel, drilling was impossible without high-quality drill bits. The supplied nut plates made bolting up the bracket a breeze.

16 After installing the supplied fittings, we loosely installed the block adapter onto the oil cooler, and oriented it so it cleared surrounding components.

17 The kit includes AN-10 stainless steel braided hose and fittings, which have to be custom-fit and assembled. We installed the fittings on one end of the hoses, trimmed them at the appropriate length, and installed both hoses. After we wrapped the hoses with the supplied spiral wrap material, we routed the hoses to avoid surrounding components. Stainless steel braided hoses are extremely abrasive, so the spiral wrap keeps them from filing through anything they touch.

19 Before we reinstalled the steering rack, we had to trim the original steering rack mounting bolts per the instructions. The steering rack bushings feature multiple mounting holes with the goal of raising the steering rack as high as possible while maintaining adequate clearance between the rack and the engine. The higher the rack, the shorter the bumpsteer stack required (we’ll get to that later).

20 The adjustable tie-rod kit required us to drill out the spindles to accept the new straight 5/8-inch bolt rather than the OEM-style tapered stud. After we removed the splash shields from the spindles, we used a sturdy drill press at a very low speed, and plenty of cutting oil.

21 After we reassembled the front suspension, we used Maximum Motorsports’ bumpsteer gauge to set our bumpsteer curves. It makes an otherwise difficult task straightforward and precise.

22 By trying different spacer stack thicknesses, we homed in on a good bumpsteer curve for the right and left sides.

23 Our final bumpsteer curves emphasized minimal change during the first inch of bump travel, and we settled on a stack that was essentially equal on both sides.

24 Ford changed sway bar dimensions and mounting positions over the years for handling and tire clearance. Even though we opted for the standard offset control arms, our sway bar mounting eye didn’t match up with the mounting pad in the control arm.

26 The kit utilizes the OEM studs to mount the relocation blocks, to which the sway bar bushings attach.

27 With the sway bar eye now aligned with the control arms, we trimmed our sway bar end lengths so the bar was horizontal at ride height.

28 With the car back on the ground, we set the camber and toe to our preference: minus 1.6 degrees camber, zero toe-in. The Maximum Motorsports K-member and front control arms moved the wheels forward 3/4 inch, which improved weight distribution and increased caster. More caster angle means the tire gains more negative camber as the wheels are turned. With the OEM suspension geometry at our lowered ride height, our tires kept the same camber angle when the steering wheel was turned 360 degrees. With the Maximum Motorsports parts installed, the increased caster angle resulted in a full degree of negative camber gain at the same steering angle. This is really helpful in tight turns at the autocross.

29 On a car as low as ours the revised suspension geometry with the Maximum Motorsports K-member and control arms is a huge improvement over the OEM parts. The control arms were now only 6 degrees from level.

30 On the road we could feel an immediate improvement in steering response and grip. The chassis changed directions eagerly. The brakes were more responsive as well. We can’t wait to hit the track and autocross course this spring!