How to Install Energy Suspension Bushings in a 2015 Mustang IRS

While the S550 Mustang’s IRS is mostly good, significant wheelhop can be a problem in the burnout box if you’re planning more than a few runs down the quarter-mile. 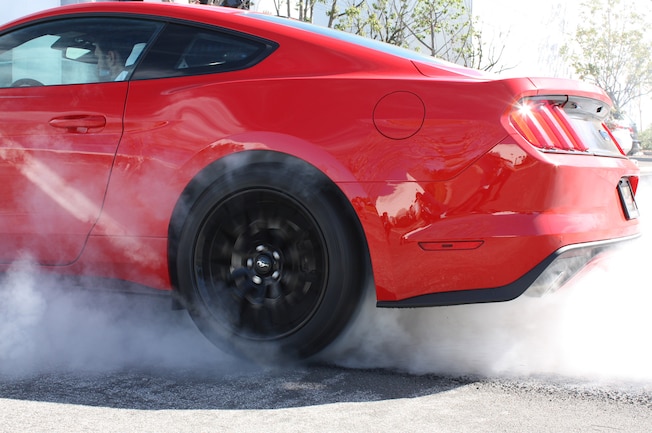 It’s not something many would often realize, but it’s still worth noting that the 2014 Mustang was the last rear-wheel-drive car sold in the states that had a solid rear axle. While most in the wine-and-cheese crowd have been whining about it for probably at least the last decade or so, they certainly don’t take into account that the Ford 8.8-inch rearend, installed in Mustangs since 1986, has made all 4.6s and 5.0s (save for 1999-2004 Cobras) among the best cars around to have fun on the quarter-mile.

And that includes most of us in the grassroots crowd on up to full-tilt 6-second NMRA professional-level track stars. Not only that, but it’s still possible to make a stick-axle Mustang handle as well as just about any other car around without an inordinate amount of suspension upgrades.

While Fox, SN-95, and S197 4.6s, 5.0s, and Shelby GT500s will be with us for a long time to come, time waits for no one when progress comes calling. So it’s a natural progression that the new 2015 Mustang S550 platform is now (some will say finally) equipped with an independent rear suspension across the entire vehicle line.

The IRS certainly makes for a truly 21st-century level of performance coupe handling that can go toe-to-toe with just about any car from the U.S., Japan, or Germany. But it can be detrimental to those who might like to take the new S550 to a place near and dear to many late-model Mustang enthusiasts: the dragstrip.

The main issue is wheelhop when trying to maybe put a little heat into a pair of street tires. The problem can be more significant when the tires are drag radials, treaded DOT slick-type tires, or full racing slicks.

So if the problem is wheelhop, the solution (or at least the beginning of it) is going to be firmer suspension bushings throughout the car’s IRS. And in the case of the following install, that solution is a full set of Energy Suspension polyurethane bushings to replace the stock rubber bushings.

Energy Suspension has long been at the forefront of polyurethane suspension bushings for all types of performance applications, and the new 2015 Mustangs are the latest car to get the company’s treatment. In addition to the IRS bushings for the new Mustang, we are also going to touch on everything else available for new S550s, including front antisway-bar bushings, front lower control-arm bushings, and a transmission mount for manual-trans-equipped cars. Let’s take a look.

01. Wasting no time, Energy Suspension has a display S550 IRS that shows all the various components that are upgraded with Energy’s polyurethane bushings. The rear subframe mount—or cradle—that holds the 8.8-inch centersection in place gets bushings at all four corners to attach it to the car, as do the four mounting points that locate the differential housing in the cradle. Furthermore, the three links and the lower H-arm on each side also get a full complement of bushings.

02. The rear suspension on the 2015 Mustang is housed in a cradle that’s held to the car’s subframe with four bolts, so to install the bushings, removing the driveshaft and brake calipers (which are hung out of the way and not disconnected from their lines) is required, followed by the removal of the entire rear IRS from the car. With the rear suspension and cradle out of the car, the suspension components are accessible. The rubber bushings are removed and the Hyper-Flex polyurethane bushings installed in their place. Most of the whole process is pretty much the removal of the stock rubber bushings and the installation of the Energy bushings using various procedures. The stock rubber bushing is already removed from one end of the upper camber link as shown here.

03. Both ends of the upper camber link get new bushings. It begins with the installation of the outer steel sleeve on one end, press-fitted into place as is being done here.

04. Once the steel outer sleeve is in place, the urethane bushing is covered with the supplied assembly grease and installed onto the link.

05. Work continues on the upper camber link with the bushing being press-fitted into place on the arm, using another properly sized sleeve as a guide.

07. Another urethane bushing is pressed into place on the other end of the upper camber link.

08. Work is completed on the upper camber link for one side of the IRS with the installation of the appropriate fitting installed into the urethane bushing.

09. The next IRS components to receive the urethane bushings are the integral links. One of the two is shown here with one of its stock bushings removed, and it has the Energy outer steel sleeves already installed.

10. With the sleeves in place, a urethane bushing is press-fitted into position in the integral link.

11. Using plenty of lubrication grease, an inner sleeve is then press-fitted into place inside the bushing.

12. With one side of this integral link completed as shown here, installation continues on the other side of a bushing, again using a steel sleeve as a guide.

13. Installation is completed on the integral link with the inner sleeve pressed into place in the bushing.

14. Next to be done is the installation of the bushings on the H-arms, which are the main pieces of the S550 IRS. With the stock rubber bushings removed, the urethane bushing is carefully set into position before being press-fitted.

15. Although it popped out once while being pressed into place, the shop tech was able to make it go into place in the H-arm on the second try as shown here.

16. The inner sleeve is then pushed into place in the bushing.

17. With the rubber bushings removed, a small amount of material needs to be removed from this location on the H-arm. A few swipes with a cutting tool is enough to make room for the urethane bushing.

18. A liberal amount of lubricating grease is spread around the opening in the H-arm.

19. The center bushing fits into the opening on the H-arm, while the end piece fits on the bottom.

20. The center bushing is then gently pressed into place in the H-arm.

21. While another end piece fits on top.

22. All three pieces of the bushing are then pushed together with the inner steel sleeve in the middle.

23. In another opening in the H-arm, the outer steel sleeve is already in place and the urethane bushing is pressed into position.

24. The inner steel sleeve is then pressed into the bushing, which completes the installation work on the H-arm.

25. Moving to the cradle, the stock rubber bushings are removed.

26. The Energy Suspension urethane bushing halves are an easy fit into one of the four mounting holes for the cradle.

27. The inner steel sleeve is an easy press-fit by hand into the cradle bushings.

28. Another one of the four mounting points for the cradle gets its pair of bushings.

29. The upper camber links with the urethane bushings in place are then reinstalled onto the cradle.

30. The links are then securely fastened to the cradle as shown.

31. The stock bushings are removed from the cradle mounting points that place the differential centersection in the cradle.

33. It’s then all tightened securely with a nut and washer on the other end.

34. The H-arm, integral link, and aluminum knuckle or hub are briefly installed here to do a sort of test-fit of everything. With everything looking OK, they are removed again before placing the cradle back in the car, where they will be reinstalled. They need to be reinstalled in the car to allow various components, such as the axle half-shafts, to first fit in the car.

35. A forklift was used to R&R the IRS cradle from and to the car. Here it is with all the new urethane bushings in place going back into the car. Both we and Energy Suspension would like to thank Granatelli Motorsports for supplying its 2015 Mustang GT test car for the installation work.

36. Energy Suspension also offers urethane bushings to fit the front lower control arms on the 2015 Mustang as shown here. To the left is the removed arm; below is the stock bushing. The new parts are the three bushings, the inner steel sleeve, and the bushing grease. The outer sleeve is already installed in the arm.

37. Installing the outer steel sleeve is similar to the bushings in the IRS. It press-fits into place with a preset measured amount sticking out of the arm as per the supplied instructions.

38. With one black bushing installed on the bottom, the red bushing is pressed into place.

39. With the red bushing in the middle, the second outer black one is then installed.

40. Using plenty of bushing grease throughout, installation of the front lower arm bushings is completed by pushing the second outer bushing into position.

41. The final pieces for the front of the car are antisway-bar bushings. After the removal of the bar, the bottom metal bushing mount is pried off as shown.

42. The stock rubber bushings are glued on the bar and need to be pried off. If the rubber bushings don’t come totally off when pried, use an X-acto knife to cut the remaining material off the bar.

43. The stock rubber bushing to the right is discarded, while the two metal brackets to the left are reused with the new urethane bushing.

44. A little clearance work on the brackets might be required to fit the new bushings.

45. As with pretty much all other Energy bushings, the antisway-bar ones are a direct replacement for the stock pieces.

46. Again with plenty of bushing grease, reassemble the antisway bar and reinstall in the car in reverse of its removal.

47. The transmission mount is an easy install and a direct replacement for the stock piece. Begin by supporting the transmission with a jack, and unbolt and remove the rear crossmember as shown.

48. The rubber mount comes out, and the urethane one goes directly in its place.

49. The second half of the new mount presses into place. Complete the installation by reinstalling the transmission crossmember.