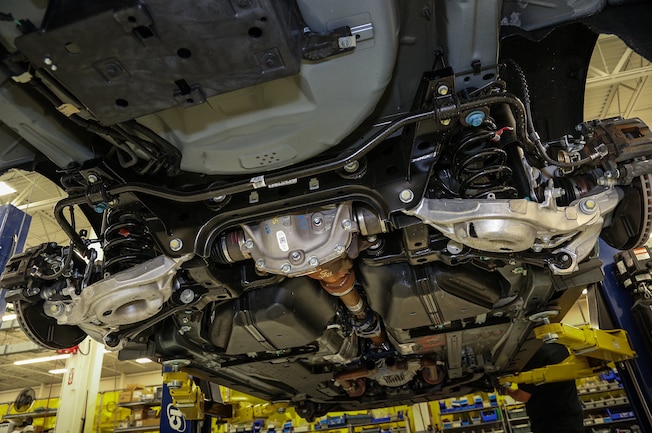 The S550’s new IRS in stock form (with the GT’s exhaust system out of the way) is quite different from the Terminator’s, but nothing earth-shattering here. Various suspension components and the differential pot attach to a subframe, which attaches to the unibody at four points. From the factory, metal-sleeved rubber bushings are found at the subframe-to-body and subframe-to-differential mounting points. Unbolt some rear brake and damper hardware, along with the driveshaft, and the whole IRS subframe/suspension can be lowered as a complete assembly. Sounds simple enough, right?

That all S550 Mustangs were destined to wear independent rear suspension has been common knowledge for a long time now. Some of us were happy; others wary. From a ride and handling perspective, the advantages of IRS are undeniable, yet the departure of the faithful old stick axle is no doubt a point of concern for hardcore quarter-mile warriors.

Blue-anodized aluminum bushing upgrades are available from FRPP either preinstalled in a new subframe (M-5035-M) as seen here (viewed from the front), or as bushing-only kits to replace the rubber versions in your S550’s factory setup. Either way, the bushing upgrade requires removing the whole rear subframe/suspension assembly from the car.

No one was able to put those concerns to the test sooner than the guys at Ford Racing Performance Parts. Just as soon as prototype or preproduction 2015 coupes became available to them, FRPP headed out to nearby Milan Dragway, slapped on a set of sticky slicks, and proceeded to test the S550 IRS to its launch limits—and beyond. As we documented briefly in a previous article (“Launch Party,” Mar. ’15), once those limitations were recognized, FRPP was quick to come up with fixes that are already available through regular Ford Racing outlets.

Late last October we got an eleventh-hour invitation to watch and document as FRPP’s IRS bushing and axle upgrades were installed at Watson Racing. This new GT coupe was headed to Las Vegas and was going to be displayed on its side in Ford’s SEMA booth. This opportunity gave us an early chance to not only see what’s involved in installing FRPP’s upgrades but also to get an introductory overview of the Mustang’s new IRS architecture. IRS is here to stay, so consider this a primer on its general layout and a basic idea of the wrench work needed to make it shrug off the specific demands for dragstrip use.

These IRS mods, by the way, have been very effective, as proven by Ford Racing’s much-viewed “.99 Challenge” video (youtube.com/watch?v=Kulx2AfNZuY), where the 2.3L EcoBoost test car can be seen launching with daylight underneath its front tires.

1. Shown from behind, this look at PN M-5035-M details the aluminum bushing hardware preinstalled at the four points, where the differential centersection mounts to the subframe. Aside from all the installed bushings, this subframe is absolutely identical to the Mustang production line version.

2. Once the after-cat exhaust is off, initial disassembly steps take place in the wheelwells and involve nothing more complicated than unbolting support brackets for the rear brake line and parking brake. From there, removing and hanging the calipers complete with their brackets. Note that the brake line and e-brake cable remain attached to the caliper assembly.

3. Two bolts securing the aluminum top shock brackets to the unibody are then removed (the shock remains bolted to the lower control arm at its bottom end.)

4. At the subframe’s front mounting points, a small support bracket on each side is unbolted from the unibody frame section. The large blue bolt in the shot is one of the four beefy fasteners securing the subframe to the unibody.

5. If you’re doing this at the track or at home in the driveway, a jack would need to be placed under the differential while the subframe is unbolted. In our shots you’ll see a tubular fixture in use; you don’t need this fixture. With its two vertical locating pins, this rig was developed by Watson Racing specifically to help reinstall IRS subframes still wearing their OEM rubber bushings. This fixture is not necessary to install a subframe with the FRPP aluminum bushings in place.

6. Six bolts that attach the driveshaft to the pinion flange need to be removed. Also, a small vent tube on the differential needs to be unplugged. At this point the rear subframe and its attached suspension hardware are ready to be unbolted from the unibody as a complete assembly. Obviously we’re doing this on a hoist, but the technicians at Watson Racing assure us that this can readily be accomplished with the car on jackstands—an approach they took trackside many times when developing the IRS upgrade hardware.

7. The fixture’s pair of precisely machined spikes slide into existing holes in both the subframe itself and the body’s frame sections; however, their only purpose is to keep a subframe that still utilizes the stock rubber bushings in proper alignment during reinstallation. Incidentally, the Watson crew named this fixture Buffy because of these vampire-killing spikes. But we repeat: Installation of a subframe with the upgraded aluminum bushings in place doesn’t need such a fixture, since the new bushings effectively align the subframe themselves. Here’s why the difference . . .

8. . . . The inner sleeve diameter on the factory bushing (left) is much larger than the mounting bolt’s shaft and, without the alignment fixture, would permit skewing of the subframe and suspension components on the body. FRPP’s replacement bushings, by comparison, have a tight fit to the mounting bolts’ shafts, thereby keeping the subframe square. Why do we burden you with all this info when this fixture is not necessary to install the upgraded bushings? Just so you’re aware that if you ever remove an S550 IRS subframe and then try to bolt it back up with the stock rubber bushings in place, you could have a major alignment issue.

9. As the IRS assembly is lowered, the coil springs can be removed from their perches in the lower control arms.

10. Here’s a front view of the complete IRS assembly after its been removed. From here, simply unbolt all of the suspension components, remove the differential pumpkin from the factory subframe, and substitute the FRPP subframe with its upgraded bushings. Sine this car was SEMA-bound, FRPP’s soon-to-be-released coil springs and antiroll bar also went in place of the factory components.

11. Among the first to come off are the axle nuts. In typical IRS form, the half-shafts spline into hubs bolted to the rear uprights. The factory axle nuts are torque-to-yield and can’t be reused; however, the FRPP upgraded shafts come with conventional, reusable hardware.

12. Compare the Ford Racing upgraded half-shaft in the foreground with its factory counterpart. The center shafts (or axle bars) are made of a proprietary material said to be stronger than 300M steel and are machined to eliminate the stock shaft’s potential stress risers. The shaft ends are hardened billet steel bolted to hardened CV joints that are notably larger than the factory CVs. These axles were codeveloped with G-Force, which manufactures them to Ford Racing specs. Breakage shouldn’t be an issue, and the axles carry a lifetime warranty through G-Force.

13. Ford Racing’s Jesse Kershaw describes the upgraded axles as being similar to the Level 5 Outlaw axles G-Force offers for Camaro. “We decided to go with the best materials available rather than have staged axles, because the cost difference to upgrade the components was less than the labor time to replace them. With a significant install, we wanted to go with the best from the start.”

14. Unlike the Terminator, the S550 uses an “integral link” IRS design now becoming common across many Ford platforms. The design uses aluminum lower H-arms, steel upper camber links, toe links, and vertical integral links. The integral link spans between the H-arm and the top of the upright and is known to be effective at controlling wheelhop under hard acceleration.

16. Here, the H-arm and all links have been unbolted from the upright, and the half-shaft disengaged from the hub.

17. Inboard, the shafts take a bit of persuasion; simply pull straight out of the differential housing. Below the tech’s hand you can see the diff vent tube.

18. Among the final pieces to come off the subframe are the cast aluminum H-arms. The rear coil springs rest in these arms atop rubber isolators.

19. Once all suspension hardware is off, four bolts securing the diff are removed and the old subframe is lifted off, leaving the pumpkin resting on the jack. Again, since this car was headed to SEMA, the bare iron on the diff was painted black prior to reassembly.

20. As mentioned, aside from the installed, upgraded bushing hardware, FRPP’s M-5035-M subframe is identical to those installed at the Flat Rock factory.

21. The four diff mounting bolts go in from the rear. We’re not mentioning torque specs or getting into detailed step-by-step in this overview because Ford Racing’s kits will supply end users with a detailed instruction manual.

22. The upgraded aluminum bushings, the axleshaft, and this car’s new rear antiroll bar and coil springs are all finished in Ford Racing blue.

23. With all the suspension components reinstalled, the now drag-worthy IRS is ready to be bolted up to the unibody. The whole swap process took just a couple hours in the Watson Racing shop.

24. An installed shot looking straight up, just to help get your head around the S500’s IRS layout. The pale blue bolts are the subframe-to-unibody fasteners.

25. Our parting shot shows an installed exhaust system routing through the IRS. This is just one of three new S550 exhaust options from FRPP. But that’s a story for another day.

Buying Ford Racing’s two aluminum IRS bushing upgrades as standalone kits is cheaper than buying them prefitted onto a new subframe (PN M-5035-M), but will add to the project’s labor total. Swapping in the bushings first requires cutting out the OEM rubber bushings and their steel sleeves—being careful not to damage the subframe. The new differential mounting bushings can then be installed without a press, but the subframe-to-body bushings will have to be pressed into the subframe. Nevertheless, it’s good to have choices.