Let's Get This Straight 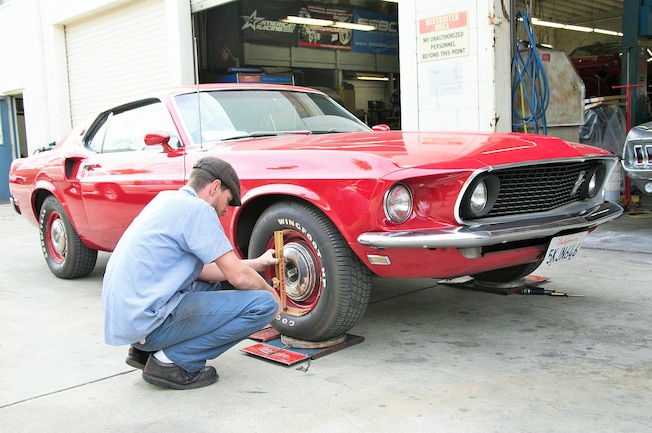 Frontend alignment is one of the most basic adjustments we can make to our classic Mustangs, but it’s also one of the most necessary and rewarding things to get right for driving enjoyment. Sure, having proper alignment positively affects tire wear, but it also affects how the car feels while you’re driving it. That’s because the three basic adjustment specs—camber, caster, and toe—combine to create the frontend geometry that will define how the tire reacts to the road in both straight lines and through curves. The adjustments to each are relatively small, but the resulting change can be very noticeable.

To understand why, it’s important to know how each adjustment affects how the car steers. Caster is the easiest to picture using the concept of trail. Picture a shopping cart's front wheel; the steering axis is located ahead of the wheel, so when the cart is pushed forward the wheel will follow directly behind the steering axis, creating a self-straitening effect that will keep the wheel stable and easy to control while driving. If the steering axis were placed vertically above the wheels, there would be zero caster effect and the wheels would tend to wander. Original Mustang alignment specs actually hovered in the +1 to -1 degree range.

Static Camber is the amount in degrees that the top of the tire is tilted from vertical; either away from the car for positive, or toward the car for negative. Essentially this slight tilt changes how the tire tread interacts with the road, particularly when cornering and the weight of the car rolls toward the outside tires. Most modern vehicles are set with a slight amount of negative camber, which aids in cornering grip.

Static Toe is the number in fractions of an inch that the tire deviates from parallel to the centerline of the car. For rear-wheel-drive street-driven cars this measurement will pretty much always be a slight amount of toe-in to promote straight line stability. The only real exceptions are cars that are autocrossed or road raced regularly; some drivers actually prefer zero toe, or a slight amount of toe-out to promote quick turn-in and rotation. We can’t recommend that for the street, though, since it’ll result in skittish handling in general.

With that in mind, the really annoying thing is that most modern alignment shops don’t know how to handle classic Mustangs. Most shops have moved to exclusively using laser alignment systems that, while accurate, typically do not have databases that go back far enough to include ’64½-’73 Mustangs. Not that it would help much if they did since the factory alignment specs are not something we’d ever recommend using on any street-driven car; especially with radial tires. That’s because Ford’s original specs were mandated for super skinny bias-ply tires with a relatively narrow tread width, rather than the wider and taller radial tires that most Mustang drivers use now. Even with a totally stock suspension, modern tires and driving conditions mandate different settings.

If you have a knowledgeable Mustang or vintage Ford shop in your area, they’ll likely know how to alter the specs, but the good news is that you can also do it yourself with a few of the proper tools. We dropped in at Mustangs Etc. in Van Nuys, California to have expert technician Steve Miko show us how he would recommend setting the alignment on ’67-’73 Mustangs with a minimum amount of special tools.

01. To set any of the alignment specs, we need the car to be at ride height with all of the weight on the suspension. However, we also need the tires to be able to slide, so the first piece of equipment we need is a set of alignment turntables for the front tires to sit on. Turntables like these can be found as cheap as $150-$200 new through Summit Racing, but they are also quite common at swap meets for much cheaper. We once bought a set for $30. Though not quite as accurate, you can also make a DIY set with two sheets of aluminum and a thick layer of grease sandwiched between.

02. This is a caster/camber gauge that locks onto the wheel. Versions of these are available right around $150 new. To quote Miko, “Caster is basically a measurement of the difference of camber in a 40-degree sweep.” That means the wheels need to be turned 20 degrees in each direction. Turn the tire 20 degrees inward and zero the gauge. Then, turn the tire 20 degrees outward and the gauge will read the amount of positive or negative caster.

04. We’re going to leave the caster as-is on this ’69, but assuming we did decide to adjust it to less negative caster, it all happens at the strut rods. First, the forward facing nut is loosened to create room for the rod to move.

06. Just as simple as that, we have 2 1/2 degrees of caster, which is a great spec for any street-driven Mustang, especially manual steering cars.

07. Since caster and camber are tied together, always check and adjust them together. The wheels need to be pointed straight ahead at a zero turn angle because, due to the geometry of the spindle, the caster affects the camber. If you have the same wheels and tires front and rear, eyeballing works quite well. It gets trickier if you have staggered offset wheels or a tire with a lot of sidewall bulge.

08. On ’64¼-’66 Mustangs, the camber adjustment takes place on the upper control arm. For ’67-’73 Mustangs, the adjustment happens at the lower control arm via an eccentric washer. They work great for street and mild performance, but exceptionally hard driving and sticky tires may cause them to shift, so checking them on a regular basis is a good idea.

09. This is what the assembly looks like outside of the car. The washer locks onto the flat section of the bolt so when loosened, rotating the assembly causes the eccentric washer to move the lower control arm either inward or outward. Since our tires are on alignment pads, they’ll slide outward without issue.

10. Slight turns yield big changes with these, so go slow and check the result. We want the adjustment to be equal front and rear, so check and make sure the eccentric matches on both sides. This typically won’t be an issue on stock bolts, but we have seen some aftermarket ones with thread running under the rearward eccentric washer that will strip.

11. Our ’69’s camber was at +.12, which is in the ballpark for original bias-ply specs, but for radials and better road hugging, Miko dialed in -.25. It’s worth noting here that having a relatively level surface for checking these specs is necessary. Miko knows this spot has a 3/4-degree grade away from the shop doors, so he accounts for that.

12. Toe is the only alignment adjustment that is independent of the others. To start, we want to center not only the steering wheel, but also the centerlink on the steering linkage. Removing the horn button reveals the steering shaft. Look closely and you’ll see a hash mark. To center the steering, we want that mark to be pointing straight up. On a power steering car, this needs to be done while the car is running to pump up the hydraulic system and remove slop in the control valve. Obviously the last time our ’69 was aligned, this parameter wasn’t followed. Once we set the toe spec we’ll pull the steering wheel and set it correctly on the shaft’s splines.

13. The simplest DIY method of setting the toe is by measuring the distance between two points on the tires. Obviously, we can’t be as precise as a laser system, but we can get quite close by measuring from the right points. Rather than using the sidewall, which can vary a great deal, opt for a tread block. Also, go as high up on the tire as the chassis will allow straight-line measuring. Miko measured 54 3/4 inches on the front of the tire.

15. After loosening the two clamps that hold the adjusting sleeve in place, Miko uses this cool tie rod wrench to make slight adjustments, but a regular wrench will suffice. Remember, the changes need to be equal per side, so only adjust for 50 percent of the total change needed. After some adjustment, Miko re-measured and found 55 inches front and 55 1/8 inches rear; perfect 1/8-inch of toe-in.

16. While you're down there adjusting the tie-rod ends, make sure the tie-rod end joints are clocked to the same position on the driver and passenger side so that they do not bind during travel (the rod ends shown here obviously need to be replaced). Once you make sure everything is tight, take the car for a drive for feel, and then recheck everything.