Improving the handling on your ’99-’04 Mustang doesn’t have to cost an arm and a leg. AmericanMuscle and GTR show us how it’s done. 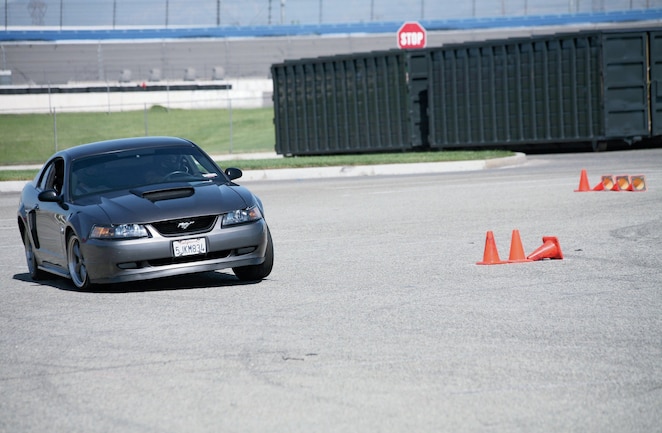 A vehicle manufacturer has to build cars that the average buyer wants, meaning they have to compromise in nearly every area in order to offer a car that appeals to a wide variety of people. Ultimate handling is always sacrificed for a reduction in noise, vibration, and harshness (NVH); horsepower is not as high as it could be in order to meet fuel mileage and life expectancy goals; even tires are used that strike a balance between performance, adverse-weather conditions, noise, ride quality, and long life. The Mustang is no different.

But you're reading this magazine, which means you're not the average car buyer or owner. You'd probably rather have all the performance with little to none of the cushy stuff that Consumer Report readers look for. That's why we're here, and that factory compromise is also what allows the automotive aftermarket to thrive. We're especially lucky that our favorite car, the Mustang, is perhaps the most popular vehicle in the world when it comes to aftermarket support, meaning that you can do pretty much anything to the car that you can imagine, using parts that exist in the aftermarket. As with anything in life, you can spend as little or as much as you want to get you to your performance goals with a Mustang, and nowhere is that more true than when upgrading the suspension.

Now, let's talk about handling. While it's true that you can spend a vault-full of money to make your Mustang handle like an IndyCar (well, almost), you don't really have to. The vast majority of people can't tell the difference between a car that handles really well and one with similar parts that is tuned right to the ragged edge of performance. The incremental performance difference at the extreme level is small enough that the non-professional driver really can't feel it. Most of us cannot feel a 1- or 2-psi change in tire pressure, or one click on an adjustable shock, or even a few tenths in a lap time. That experience only comes with a whole lot of seat time.

SpeedVentures is a Southern California–based group that holds open track and autocross events at racetracks, and we’ve attended several of them in the past. This time we took on their autocross course, set up in the parking lot of Auto Club Speedway’s big 2-mile oval track.
This is our pit space at the track where all of the work was done.

Yes, you can spend $10,000 on a suspension system and tires that will make your Mustang handle as well as it possibly can, but is it really worth it? And would you even want that serious of a suspension on a street car? For most of us, the answer is no, and thanks to that aforementioned aftermarket support, we have a ton of options for budget-based suspension parts that make a huge difference over stock, and don't require re-engineering the entire chassis.

One of the more prolific Mustang parts dealers is AmericanMuscle, which sells online-direct or through a network of dealers. Their budget-based Mustang suspension kits are the SR Performance line, and that's what we decided to showcase in this story, working with GTR Performance in Rancho Cucamonga, CA. GTR had customer Joseph Garcia's '04 40th Anniversary GT in the shop for some mods when we called, and the car's suspension was bone-stock making it a perfect candidate for an upgrade in front of our cameras. The parts we installed were the SR Performance coilover kit (PN 47375, $749.99) consisting of front coilover shocks to replace the stock struts and springs, as well as rear shocks and an adjustable spring/perch kit; SR Performance Complete Rear Control Arm Kit (PN 99250, $139.99); chrome strut tower brace (PN 41112, $119.95); and a wheel and tire package consisting of AmericanMuscle's own black 10th Anniversary–style 17-inch wheels and big Nitto NT555 tires.

Instead of installing everything in the comfort of a shop with a hoist to lift the car, GTR's Gonsalvo and Ricardo Topete did all the parts swapping at Auto Club Speedway in Fontana, California, during a SpeedVentures open track/autocross event. That way, we could run the Mustang on the autocross and get lap times showing the improvements to the car's performance. It was a long day, but a good one as the car picked up huge. Garcia's Marine-hardened smile couldn't be contained, showing his approval of the mods done to his car.

01. Ricardo Topete measured the ride height before any parts were swapped.

02. These before and after photos of the car shows the dramatic lowering effect the suspension parts made. It came down 3 1/8 inches in the rear and 2 1/2 in front. It’s low, but the ride height is adjustable in both directions thanks to the coilovers and adjustable rear spring perches.

03. In its stock configuration, notice how much body roll is present. The lap time stock was 36.89 seconds.

04. The first parts installation was simply swapping the wheels and tires. The Nitto NT555s are a 300-treadwear tire for a compromise between stickiness and long life, but they’re still much better than the stock tires the Mustang showed up with. Also, the 315/35ZR-17 rear and 275/40ZR-17 front Nittos added more rubber to the track than the 245-wide stock tires.

05. Always make sure the wheels are torqued to spec, especially when going onto a racetrack (even an autocross course). It doesn’t happen often, but we did see one racer lose a wheel from not getting it tight enough. Also check the air pressure, which makes a big difference in handling. We set the fronts to 27.5 psi and the rears at 28 psi.

06. An old autocrosser’s trick is to use shoe polish on the tread and sidewalls, to see how far the tire rolls over in a corner. If it rolls onto the sidewall, add pressure, and vice versa. The Nitto tires dropped the lap time to a best of 36.34, a full half-second improvement on a short course.

07. The SR Performance coilovers replace the stock strut and coil spring, shaving important pounds off of each front corner of the car.

08. The hot tip to install the coilovers is to bolt them to the lower control arms first, then use a floor jack to compress the arm enough to get the top nut on. Otherwise, you can’t compress the spring by hand enough to start the nut.

09. This spanner wrench comes with the coilovers to allow easy ride height adjustment. We set the height at 1 inch from its bottom-most (lowest) setting.

10. The stock rear control arms are channel-shaped stamped steel, which when combined with a rubber bushing allows too much flexing. Notice how hammered the stock bushing was, making it even worse. The SR Performance arms are tubular steel with polyurethane bushings for no flex at all.

12. The rear shock is mounted in the stock position and the spring is still located on the lower control arm, so this is not a real coilover setup. Shown here is the adjustable spring perch, which installs in the “cup” that locates the stock spring on the top. A threaded piece of steel is slipped into the hole in the frame and tightened with a bolt in the perch to hold it in place.

13. The rear spring/perch assembled. The height adjustment is done with the same spanner wrench and by turning the adjuster nut on the upper perch.

14. The upper rear control arms are similar to the lowers in construction. Also included from AmericanMuscle were new upper arm bushings on the rearend housing, but that’s not something that can be installed easily at the track, so it was done later, after our test.

15. Immediately noticeable was the difference in body roll. What used to be a lumbering, understeering boat is now a flat, fast badass. With the suspension parts installed, lap times plummeted, with a best of 34.53. A 2.36-second improvement on a 30-second course is huge!