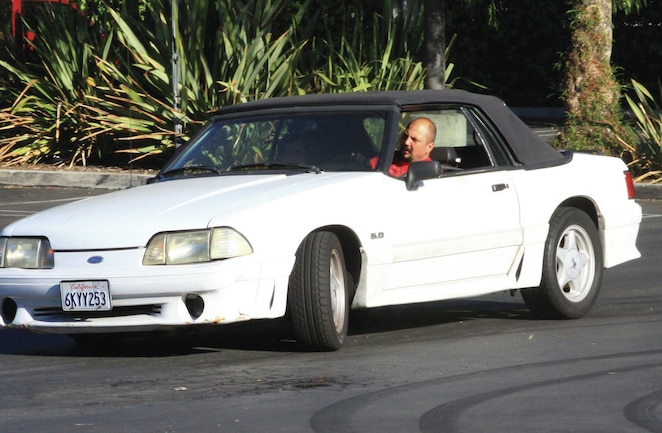 Talk about great value in a used '79-'04 Fox/SN-95 Mustang! This popular Mustang generation can be had for a song if you're looking for affordable and sporty daily or weekend transportation. Hands down the most affordable is the '85-'93 Mustang GT and LX with 5.0L High Output V-8 power and Quadra-Shock suspension because you can get into these cars for not much money, which frees up cash for terrific upgrades like Maximum Motorsports' Rear Grip Package.

Gil Ruiz of Mustangs Etc. in Van Nuys, California, snapped up his '89 Mustang GT convertible for $500. His boss, General Manager Mike O'Brien, did the same thing with a '93 Mustang GT hatchback also in need of a little massaging. Both cars run and were salvageable rides for under a grand. And for under a grand, Maximum Motorsports can set you up with a vastly improved rear suspension package and a completely renewed driving experience. It is known as the Rear Grip Package consisting of a Panhard bar and lower control arms. Maximum Motorsports has also provided us with new Ford upper control arms and bushings to tighten everything up nicely. Check out these upgrades and stay tuned for our final installment where everything is tested for before and after evaluation.

01. One of the first things Gil does is measure ride height as the car sits from the factory. He does this at all four corners on a perfectly level surface.

02. Gil’s ’89 Mustang GT has aftermarket upper and lower control arms, which have done a nice job and afforded him improved stability. With Maximum Motorsports’ Rear Grip Package, we’re going to make it better. When you’re doing an upgrade like this, be mindful of clearance issues such as larger diameter tailpipes, which can get in the way.

03. We have the good fortune of a lift at Mustangs Etc. The rear axle is supported with pole jacks/stands, which will give us support throughout this upgrade.

04. With the rear axle properly supported, the shock absorbers are disconnected first using a 15mm socket and boxed-end wrench.

05. The horizontally mounted shocks are disconnected and removed next as shown using a 15mm socket. The nut, which is secured to the bracket, is 18mm.

06. The rear sway bar is removed using a 15mm socket. Maximum Motorsports offers a heavy-duty rear sway bar, which greatly reduces body roll and keeps a Mustang upright. That will be installed in Part 3 of this series, along with the torque arm.

07. Inside the trunk/cargo area are the upper shock mounts, which are usually easier to remove with a boxed-end wrench in coupe/convertibles and a deep socket in hatchbacks.

08. With the axle properly supported, the upper and lower control arm bolts are removed using an 18mm socket and boxed-end wrench. These are aftermarket control arms previously installed when the factory arms gave out.

11. Maximum Motorsports has provided us with stock Ford upper control arms, which will clear everything and provide proper support.

12. This is Maximum Motorsports’ Rear Grip Package for the ’79-’04 Mustang. There are two packages. MMRG-1 is for ’79-’98 Mustangs while MMRG-5 is for ’99-’04 Mustangs. Included in the $606.17 basic Rear Grip Package is a Panhard bar kit and lower control arms; adjustable and heavy-duty will cost you more. Maximum Motorsports added Ford upper control arms, Bilstein shocks, and coil springs, which are extra.

13. Urethane bushings are lubricated and pressed into the lower control arms.

15. This bracket supports the Panhard bar at the axle housing. It also secures the left shock absorber.

16. A plumb bob is used to ascertain proper axle centering, which should be exactly 5 inches, as shown.

17. The Panhard bar bracket is positioned and measured, then pilot holes drilled. Measure carefully and ensure the holes to be drilled are located in the proper place.

18. This is the Panhard bar bracket’s anti-collapse chassis insert. Once framerail width is measured properly, this bracket is cut to the proper width.

19. The anti-collapse insert has been installed in the framerail and the Panhard bar bracket installed and secured with the included hardware. You also have the option of welding this assembly to the framerails.

20. Maximum Motorsports coil springs are installed next using new urethane insulators. A urethane rebound bumper is included in the kit to replace the stock rubber one mounted on the floorpan and is installed at this time as well.

21. Bilstein shocks deliver just the right dampening rate for the kind of driving Gil intends to do—a little canyon carving and a whole lot of commuting.