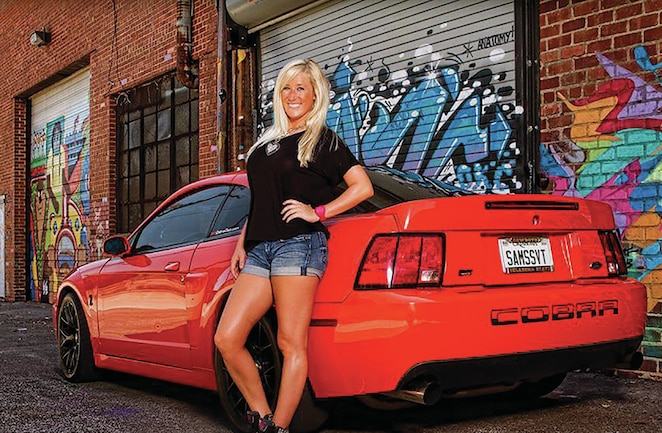 Growing up, I knew that I had different interests. I always chose Hot Wheels over Barbie dolls, and when I would get a Barbie as a birthday present, I would look at it in disgust and go and exchange it for a car. My father is the main reason I am so interested in cars. He taught me how to drive a standard on a Mazda Miata. My first car was a 1967 Camaro, and I drove that all throughout high school. For my 18th birthday and graduation gift I got my first Mustang, a 2004 Competition Orange Mach 1. I had always been fond of the Cobras, but to me it seemed like a dream car—but one I could never obtain.

But I worked hard and ultimately I found my 2004 Competition Orange SVT Cobra on Craigslist in Collinsville, Illinois. After bothering my dad enough about the car we finally sold the Mach 1, loaded up a trailer, and headed out from Oklahoma City to go pick up it up. I have had my Cobra now for two and a half years, and he has gone through many changes. Jayce, as I call him, was built on November 20, 2003, and is build number 414 of 3,768. He has a Ford Racing 4.6L Aluminum short-block assembled by Mike Henson at Henson Racing Engines. Other modifications include: Billetflow 2.76-inch upper pulley, JLT CAI, Steeda Tri-Ax short-throw shifter, Accufab single-blade throttle body and plenum, Bassani off-road X-style midpipe and SLP Loudmouth Series 2 exhaust. Jayce has 18x9 and 18x10 black SVE Drifts from Latemodel Restoration.

I hope to keep this car for the rest of my life and eventually pass it on to my children. I have big plans for Jayce once I graduate college, including a 2.9 Whipple and 600 rwhp.

Babe of the Month: Olivia Hart

Our newest Babe of the Month is Olivia Hart, who was born and raised in Winchester, Kentucky, and recently made the move to Atlanta.

Babe of the Month: Jolynn Toma

Jolynn is our Babe of the Month! She was given the opportunity to race a 1991 Ford Mustang Fox-body and placed third at the Route 66 Raceway.

Babe of the Month: Lauren Samuhel

Babe of the Month Lauren Samuhel is a 23-year-old from Greenbrier, Arkansas. She owns this 2011 5.0L Ford Mustang with a list of mods. Check them out here!

Babe of the Month: Malorie Woods

Our Babe of the Month is Malorie Woods, owner of this modified 2013 Ford Mustang GT convertible! You may recognize her from the Street Car Takeover events.

Babe of the Month: Brandillyn Durbin

Brandillyn Durbin is our Babe of the Month! Check out the Brandillyn posing with the Durbin family's 1993 Ford Mustang.