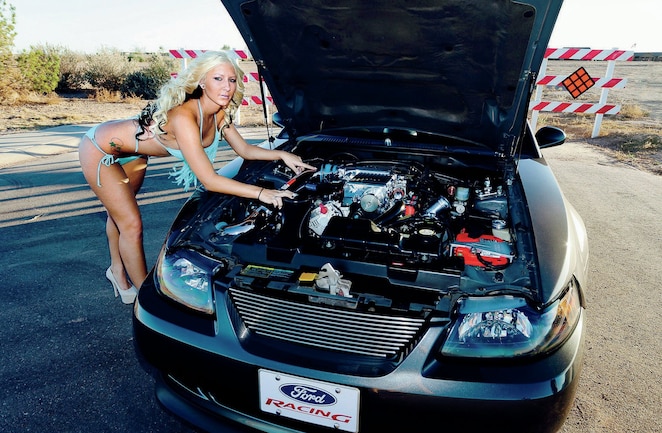 As Babes of the Month go, any candidate bold enough to emblazon her torso with a badass Cobra tattoo (complete with a message letting everyone know she's "Pretty Wicked"), is as hardcore as it gets in our book.

Twenty-two-year-old model Emily Oney not only appears to be a proverbial "hot car chick," but she honestly lives that role every day as an employee at Vivid Racing, a high-performance dyno shop in her hometown of Gilbert, Arizona. "Emily is not just gorgeous but she's smart and a gearhead too," says her friend Nick DiSanti, who submitted Emily's pictures to Babe of the Month (shot by Chris Voyles). "She really knows a lot about cars, which blew my mind when I first met her," Nick adds.

While Emily unfortunately no longer has her own Pony (her black 'Stang was destroyed in an accident), her love for 'Stangs does remain very strong, as evidenced by these photos of Emily draped around and on Nick's '03 GT . . . a real looker in its own right.

Nick's Dark Shadow Grey Pony is equipped with a polished, 10-psi Kenne Bell supercharger that sits atop the original 4.6L 2V engine. The "bling" of polished valve covers and a chrome cold-air tube adorns the bullet, which puts 400 horses at the back wheels—through a stock automatic transmission, at that. The 'Stang's balanced stance and tight handling were achieved with Maximum Motorsports suspension gear in the front and rear, along with Bilstein dampers at each corner. Falken tires and Ford Racing's FR500 wheels helps give this ride its flair, too. In the cockpit are a body-colored, six-point roll bar and MMR rear-seat delete, as well as signatures of such Mustang legends as Parnelli Jones, Chip Foose, and the late, Carroll Shelby.

If you're a good Babe of the Month candidate, or you think you know a hot lady who is one, get us some photos (and info about the Mustang she's pictured with)! Send hi-resolution images to: finish.line@enthusiastnetwork.com (be sure to put "BOTM" in the subject line).