Better than original? This’69 Shelby still hits the streets of New York 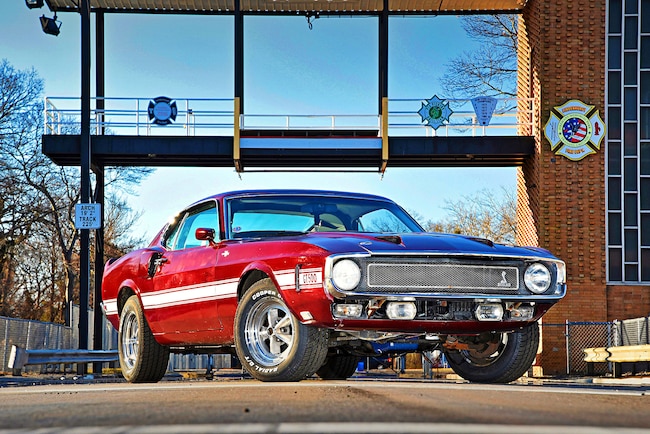 The late 1960s were like the Wild West of motorsports—Midnight Cowboys and Bowtie Bandits armed with big-block engines strapped into their holsters, duking it out on the streets of Everytown, USA. It was a scenario that was played out nightly on the local blacktop, and it's a steadfast memory that still captivates the minds and hearts of the die-hard followers of the muscle car era.

With the Big Three (and don't forget AMC) feeding the hungry public a healthy diet of over-the-top muscular designs, both the competition and the creativity were at a zenith during the 1969 model year. With factory big-block builds roaming around every corner looking to feed on lesser Brand X cars, the proprietary players in this passion play of power needed to outdo each other on a daily basis. This was done in an attempt to hopefully lay claim to at least a warm slice of the "American Pie Chart" of national car sales.

Ford was a big player at this point of the game, as their top-dog ponycar was still holding its own and then some, despite Brand X competition coming to Dearborn from every direction. With big-block Camaros and Barracudas running wild on the streets, the Blue Oval boys knew they had to keep up with the horsepower output packed into their sporty creations. They unleashed a bevy of wild Mustang rides at the public, all in the hopes that their popular compact could hold off the wolves and move into the new decade with formidable teeth—and as a force still to be reckoned with.

Shelby Pride
At the forefront of Mustang models were the Shelby-badged cars that were now built solely by Ford. In 1969, you could either get a G.T. 350 backed with a stout 351ci engine or the top-of-the-line G.T. 500, now endowed with brutal 428ci Cobra Jet power. Both cars carried on the legacy and the outward badging with pride, along with about four extra inches in total length. Like all Shelby cars, they sold and performed well, keeping up the brand's killer reputation on the streets.

John Lazzaro of Lindenhurst, New York, is a local Mustang expert and is a current employee of Ford as a senior master technician. He's a Mustang man through and through and is certainly not wet behind the ears when it comes to Ford's ponycar. "I've been doing classic Mustangs for 35 years it's a family thing; I build them, and my daughter drives them," John says.

John is always on the lookout for interesting Mustangs, and he has a sweet, highly optioned '65 GT in the garage already. But like with most obsessed car aficionados, there's always room in the garage for one more—if the opportunity arises. And interestingly enough, it recently did.

Shelby Search
John had been on the lookout for a '69 Shelby to make his own. After months of hunting online auction sites, he was getting nothing more than tired eyes. "I also really wanted to get a good look at it in person before I bought it, which makes the online process more difficult," says John. That one-on-one inspection would be a priority in any serious collector's list. "Then finally last year I saw an ad on Craigslist for a supposedly solid G.T. 500. It was just a few hours away, so I took a ride," John continues.

Lo and behold it was the right car with the right history to go along with it. "Everything was in place on the body and chassis, even had the original windshield with it. It also came with a replacement engine installed that didn't run, but it didn't matter to me," says John. Just the fact that it was intact was enough for him, so he made a deal on the spot and took the Shelby home.

What John bought was certainly an interesting ride. The Shelby was sold new at nearby Gotham Ford, the world-renowned dealership located at the corner of 1st Ave. and 61st street in New York City. At the time it was the largest selling Shelby dealership in the country, eclipsing Larsen Ford, which was based in nearby White Plains, New York. The original salesman was none other than Bill Kolb Jr., the famous Ford employee and race car driver who was transferred to Gotham from Larsen under the direct orders of Lee Iacocca himself.

The Shelby has quite a few very desirable options and some prominent bullet points about its current condition. First off, the car's original drivetrain is not intact, as stated before. That would be a huge sticking point to many purists, but to John it's not a big deal because in place of the original 428 CJ sits a side-oiler 427—one of the most desirable Ford drag engines ever built. Word has it that the original owner bought the engine over the parts counter at Gotham and installed the 427 to do damage on the streets and dragways of the greater Metro area.

It's also 1 of just 145 Drag Pack Shelbys built in 1969. It still has the 3.91 gears out back and the oil cooler mounted on the radiator support. About three-quarters of its original Royal Maroon paint is still intact, and the body is virtually rust free, with solid floors and rockers. All the glass is original, and the interior is complete and in good shape, with just a tear in the driver seat.

Once he got situated, John ordered up the paperwork from Kevin Marti and put it alongside some of the original invoices he received with the vehicle and a repro of the original window sticker. "I also got to talk in great length with the second owner who had it for the majority of its life; a total of 35 of its now 50 years of existence," says John.

Diving deeper into the car, John found the non-original engine is a story in itself. Taking a look at the 427, John found that only the block and heads are now left of the 427. The rest of its parts were salvaged from the original 428, including most of the accessories, carburetor, and distributor. The only other oddball part on this beast is the intake manifold—an Edelbrock part.

The Shelby was not running when John purchased it, but after a little time and elbow grease, the veteran Ford mechanic got her to spring to life. He then went ahead and fixed other issues to make her roadworthy, replacing the ball joints and brakes and skinning the original wheels with a new set of Cooper Cobra P235/60R15 rubber. The Lucas driving lights still work, along with the AM/FM radio and sequential taillights.

What does the future hold for this stunning Mustang? "It's a highly sought-after Shelby. I thought about selling it, but right now it's the right car at the right time for me," John says. Many purists think without the original engine sitting in the bay, this car is not as desirable as a pure stock car, but others disagree. Some think the 427 upgrade and the story that goes with it make this Mustang an example above and beyond stock.

Either way, it doesn't matter to John, as he's scored a Shelby that's a find of a lifetime. "It's been a wonderful experience to get to own and drive this time capsule, and it's certainly gonna be hard to pry it from me."

John Lazzaro's '69 Shelby never strayed far from Manhattan's Gotham Ford, the dealership where it was sold new by none other than famed Ford racer Bill Kolb Jr.
The highly reflective longitudinal stripes let other street racers know that this particular Mustang was built to take on all challengers.
Many consider the rear view the best viewing angle on this stealthy Ford. Unfortunately for them, it was a sight seen by many competitors during the heat of battle on the streets.
This Shelby shows off its perfect 1970s stance, with just enough rake from back to front. Lazzaro's Shelby still retains its original set of wheels, which are in excellent shape for their age. They are now shod in Cooper Cobra rubber—P235/60R15 on both front and back.
When the current owner purchased this Shelby, the original 428SCJ was missing. In its place was a 427ci side oiler, bought over the parts counter and built up with the accessories from the original engine, along with an Edelbrock 427 intake. The '69 Shelby's Air Grabber hood was one of the largest parts ever serviced by Ford. Due to its length and front overlap, it was damaged easily and could lose its shape from mishandling. The NACA ducts helped feed cold air directly into the hungry 427ci mill.
With the Drag Pack option and V-code rear axle, this Shelby received 3.91:1 gears and this oil cooler mounted on the radiator support.
The original Ford Holley 4150 carburetor from the 428 now resides on the Shelby's 427 and sits on an Edelbrock intake manifold.
Besides a few rips, the original interior is in reasonably good shape for a 50-year-old car. The tilt-away steering wheel still performs the way it should.
A.O. Smith did the body modifications on the '69 Shelbys, which included the new grille, fiberglass fenders, taillights, and this sporty rollbar.
The Shelby's console houses an automatic shifter to lock the C6 transmission into gear. Oil pressure and ammeter gauges keep track of vitals, while an AM/FM stereo pumps out some needed tunes.
The original big-block-specific muffler still sits below the car.
Rarely seen, this Shelby still retains its shipping tie-down tabs.
This close-up shows the crazing in the Shelby's original paintjob.
John Lazzaro stands next to his prize. A participant in the Mustang hobby for the last 35 years, John also has a rare, highly optioned 1965 Mustang GT in his garage.