Newsletter
Sign Up today for our FREE Newsletter and get the latest articles and news delivered right to your inbox.
Home
Muscle Mustangs & Fast Fords
Features
News & Views

Ford Performance Launches Its Most Powerful Supercar Yet: The Ford GT Mk II At Goodwood 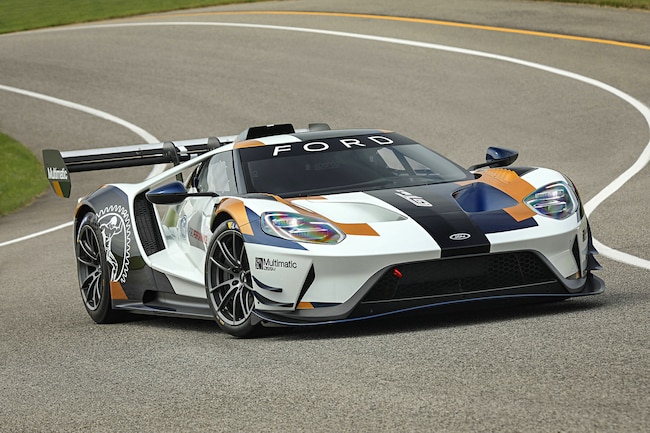 Is there anything more American than a car unfettered by rules? A super car maximized for on-track performance? That car is breaking cover on Independence Day in of all places, but jolly old England. The car in question is a new, limited edition Ford GT Mk II bred for all-out performance on the road course and sold to just 45 fortunate buyers.

"The GT Mk II unleashes the full performance potential of the Ford GT without any artificial performance limitations dictated by racing sanctioning bodies," Hau Thai-Tang, Ford chief product development and purchasing officer, said. "It's the closest GT owners can get to the Le Mans-winning performance and exhilarating feeling of crossing the finish line in the Ford GT race car."

To deliver a supercar that is 200 pounds lighter, pulls in excess of 2g on the skid pad, and packs 200 more horsepower than its racing cousin, Ford Performance and Multimatic, which builds the Ford GT, took what they learned in FIA and IMSA competition and applied to a production vehicle.

"The true off-the-hook performance capability of the GT hasn't yet been fully showcased," Multimatic's Chief Technical Officer, Larry Holt said. "The road car is obviously limited by the many global homologation requirements that it must comply with, and the race car suffers from the restriction of the dreaded Balance of Performance, resulting in it being 150 horsepower down to the road car. The Mk II answers the regularly asked question of how would the car perform with all the limitations lifted: the answer is spectacularly."

Spectacular is definitely the word. Doing what the team wishes it could do in racing, the 3.5-liter EcoBoost engine is pumped up to 700 horsepower. The Mk II also receives aero improvements generating 400 percent more downforce. Meanwhile its lighter weight and fixed, five-way adjustable DSSV dampers help generate more than 2g of lateral grip.

Undoubtedly a potent performer, the GT Mk II makes its public debut in the Supercar class at the 2019 Goodwood Festival of Speed. Multimatic will sell the Ford GT Mk II directly to customers and you can learn more at FordGTMkII.com. These track-bred supercars won't come cheap, however, as the production run is limited to only 45 units that carry a starting manufacturer's suggested retail price of $1.2 million.

Multimatic begins construction of the race-inspired Ford GT Mk II at its production Ford GT plant in Markham, Ontario, Canada. The vehicles are then transferred to Multimatic Motorsports where they trans form into limited-edition Mk II models.
For performance that endures extended track outings at 700 horsepower, engineers fit the Ford GT Mk II with a high-capacity, outboard air-to-air intercooler that is automatically sprayed with atomized water to ensure consistent charge-air temps.
Inside the driver still shifts gears with paddle shifters controlling the same seven-speed dual-clutch transmission from the Ford GT street car, however the calibration in this unit is specific to its track-only nature. Likewise, the rest of the interior is all business, right down to the Sparco racing seat with a six-point racing harness and a full MoTeC data acquisition system. Its digital dash also serves as a display for car's rear camera. A passenger seat is, naturally, optional.
That Mk II dual-element rear wing provides far more downforce than the street-going Ford GTs have. Paired with a new front splitter, fender louvers, dive planes and rear diffuser for maximum downforce and on-track balance. Its roof-mounted scoop feeds fresh air to the auxiliary engine, clutch and transmission coolers, ensuring on-track stamina.
Taking aerodynamic lessons from the FIA World Endurance Championship and IMSA WeatherTech SportsCar Championship race cars, the Ford GT Mk II delivers 400 percent more downforce than its street cousins and lateral grip exceeding 2g.
With 700 engine horsepower on tap, braking horsepower is crucial for track-only performance. As such, the Ford GT Mk II stoppers utilize the carbon-ceramic brakes from the street-going version. The measure 15.5-inches in front and 14.1 inches out back and are framed by unique 19-inch forged wheels wrapped in Michelin Pilot Sport GT tires. 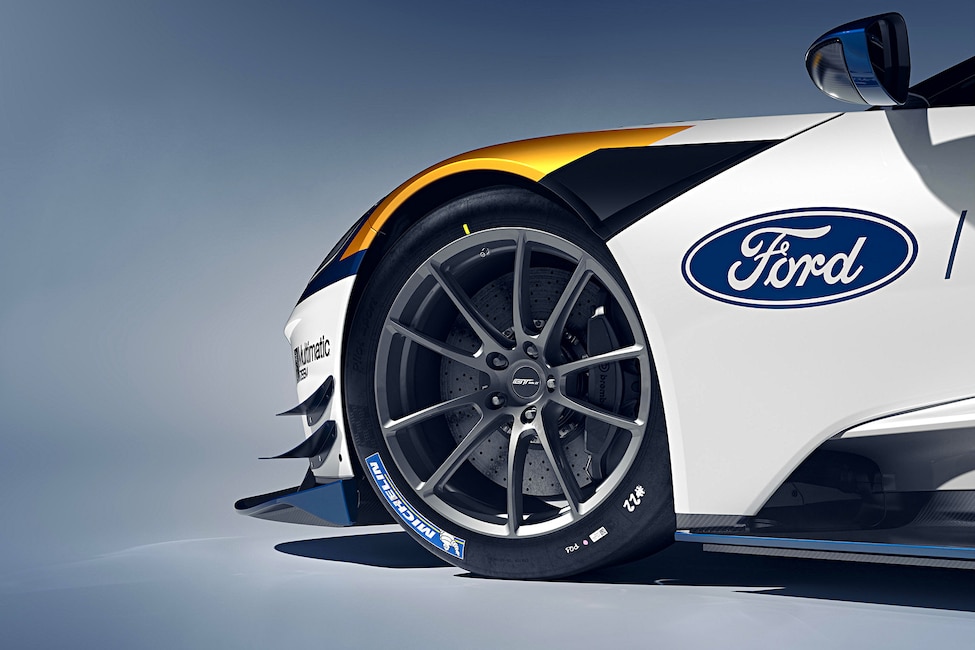 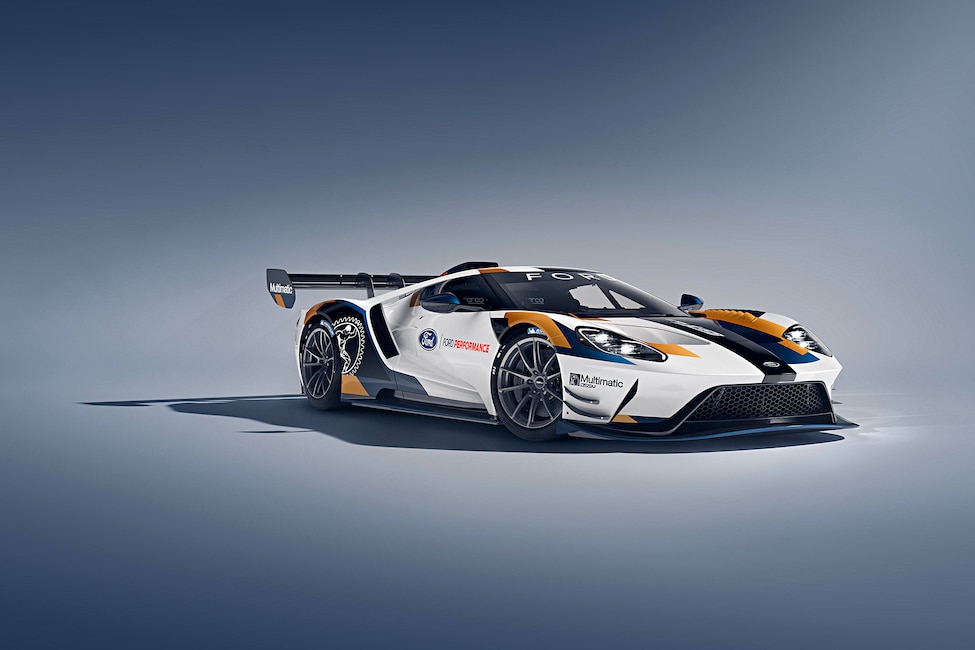 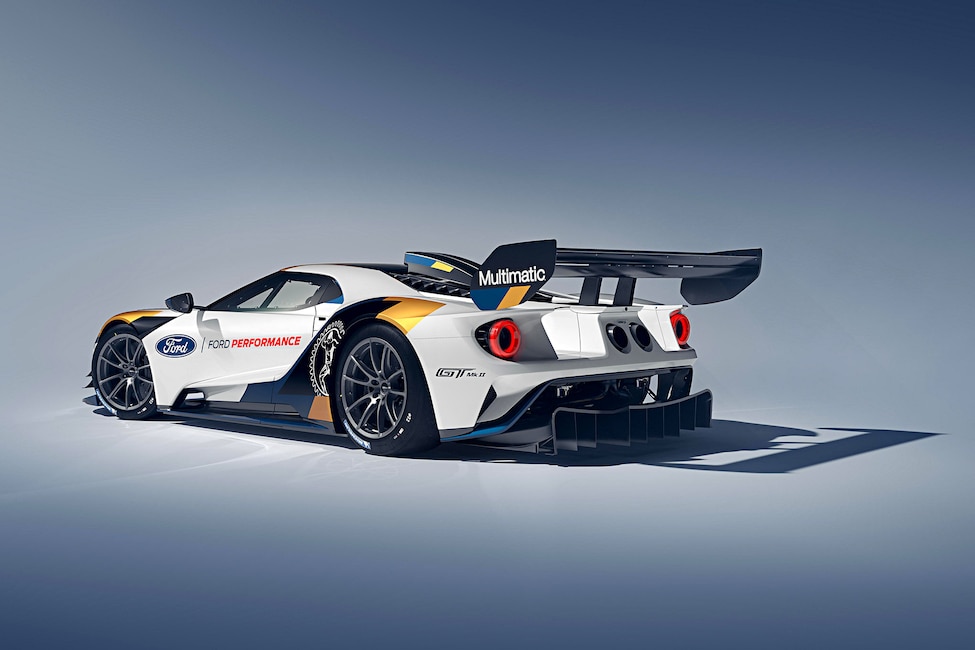 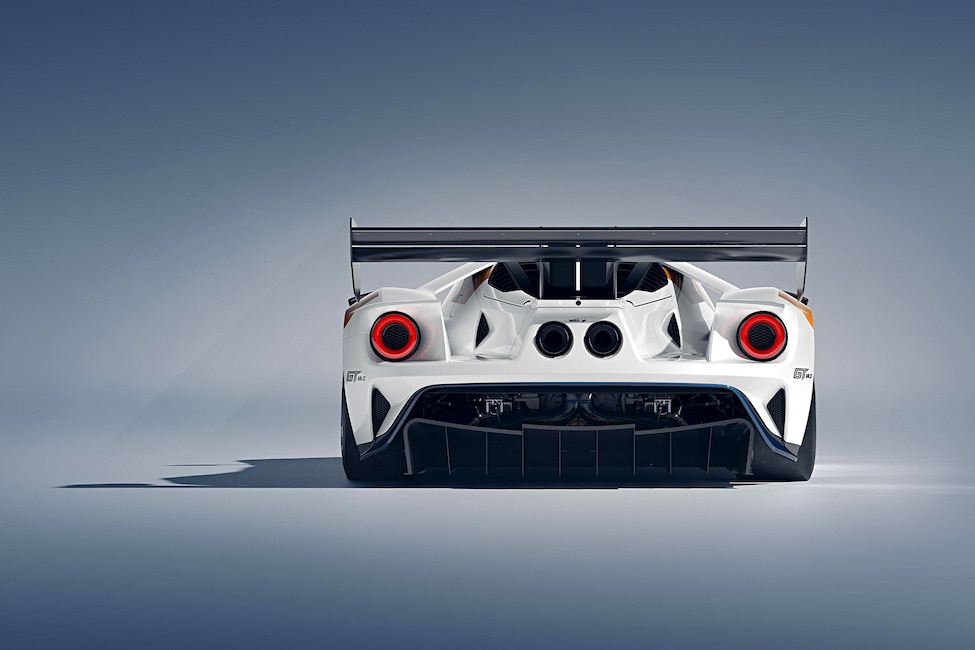 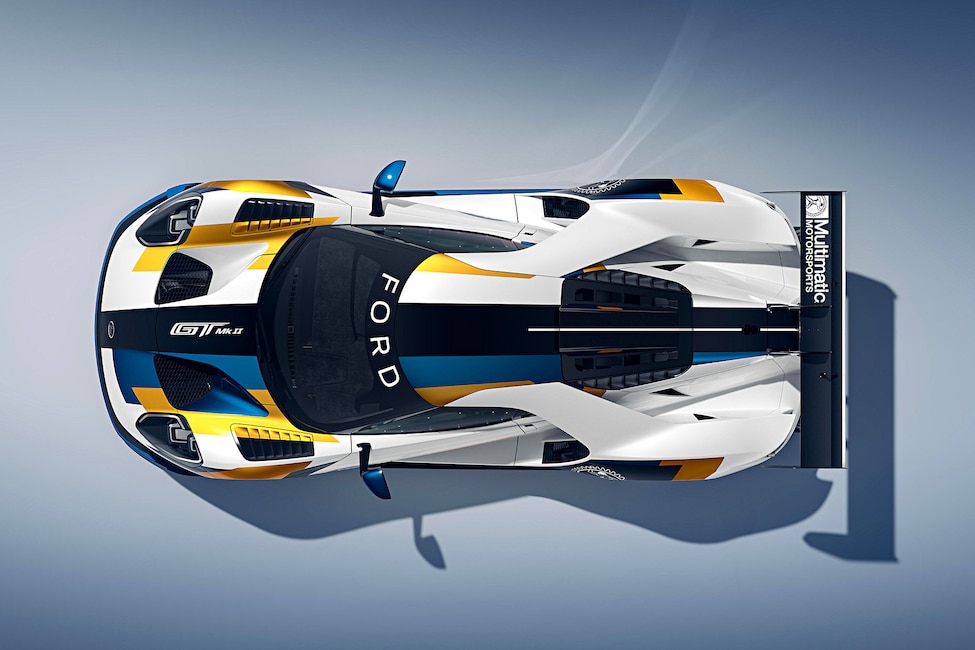 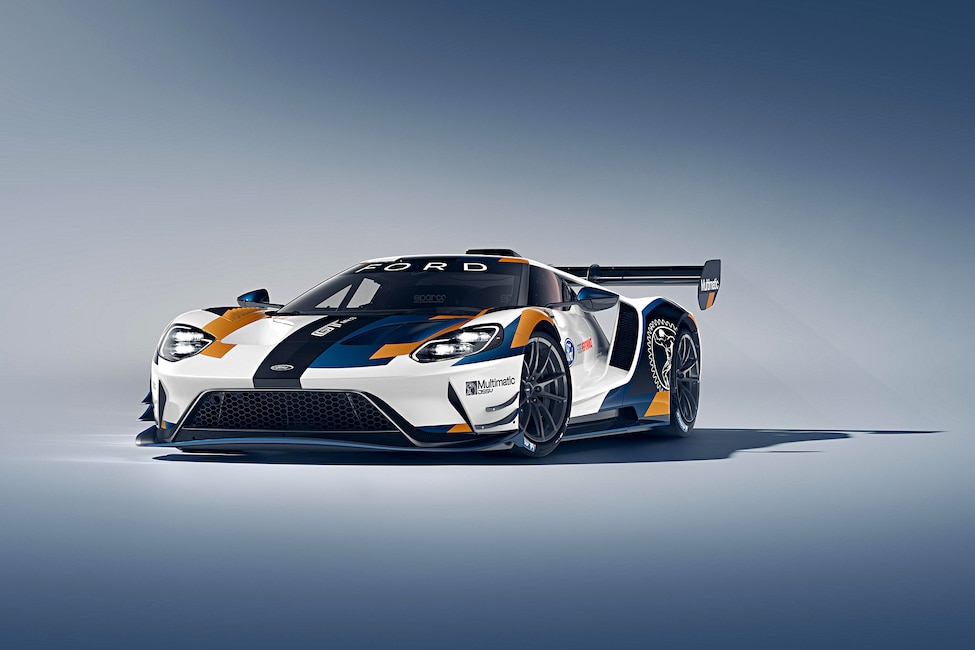 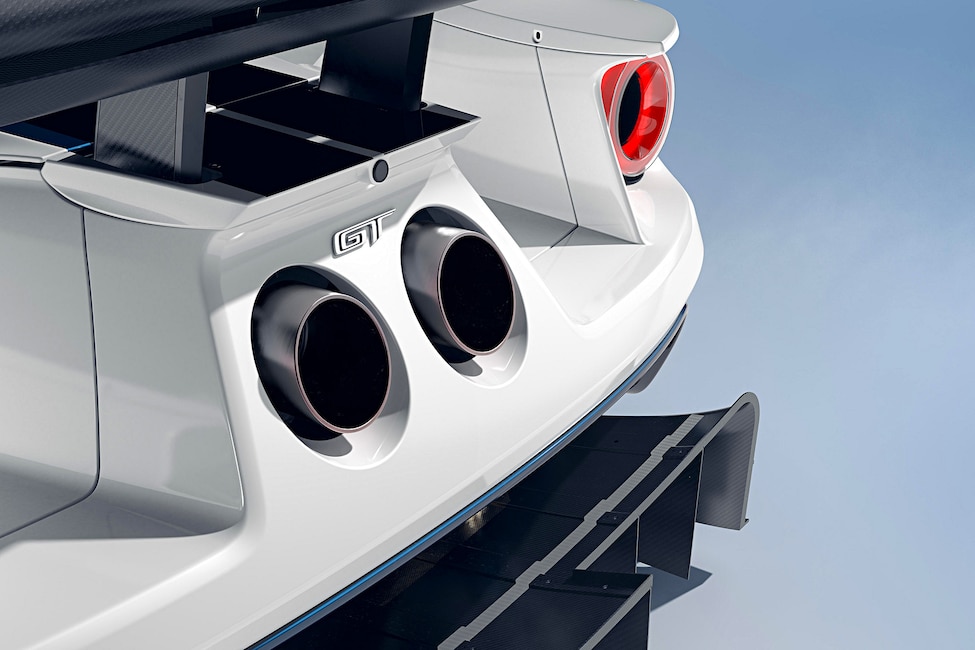 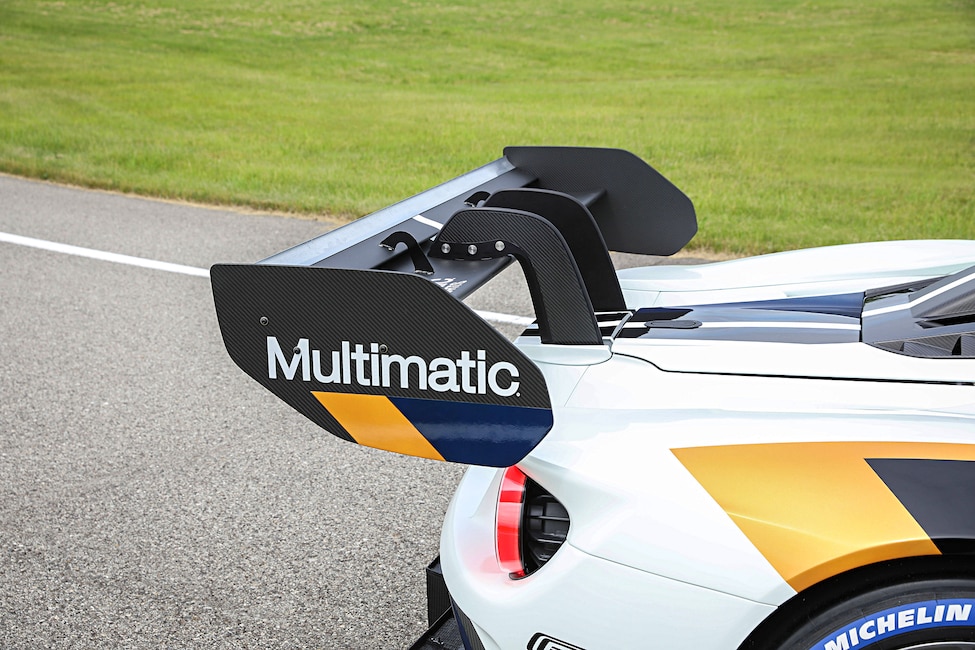 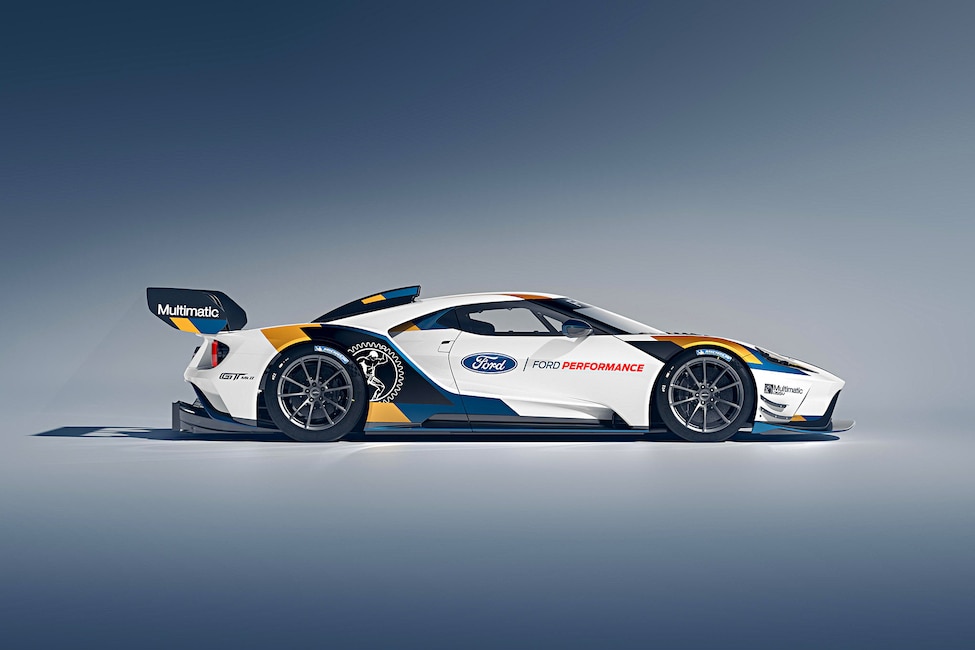 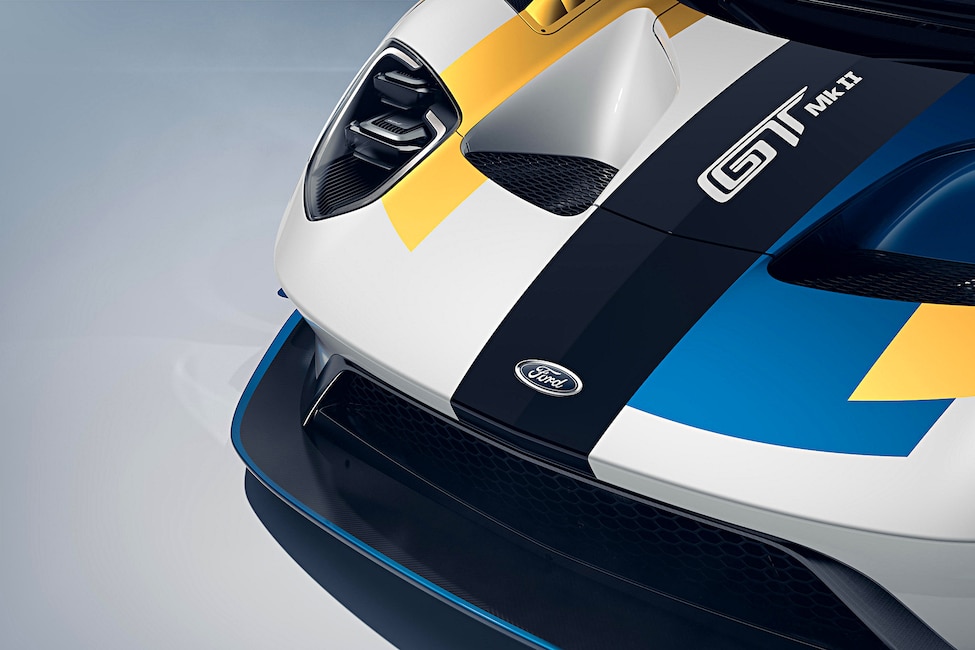 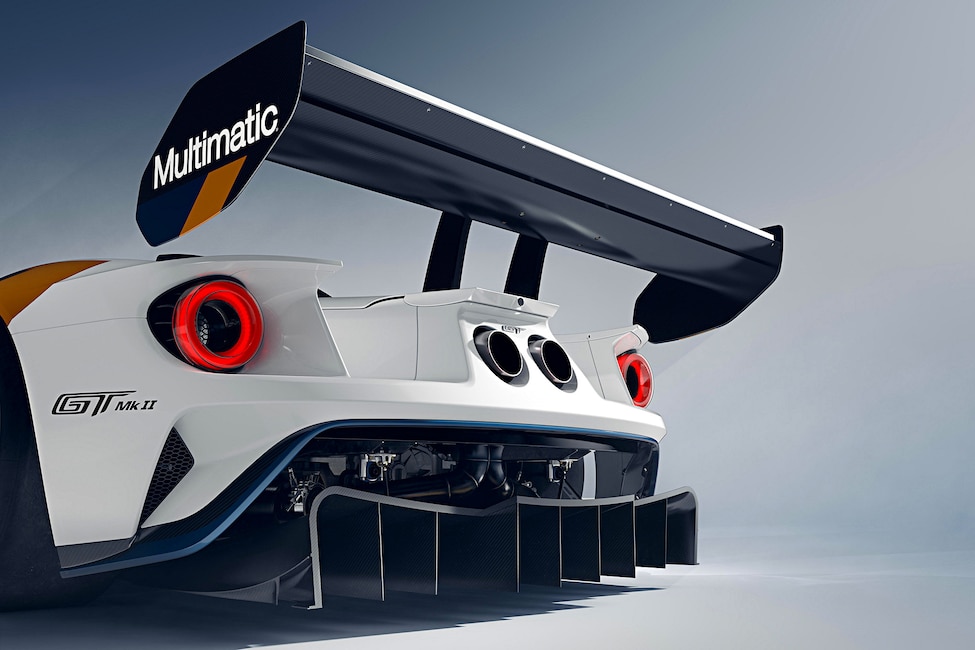 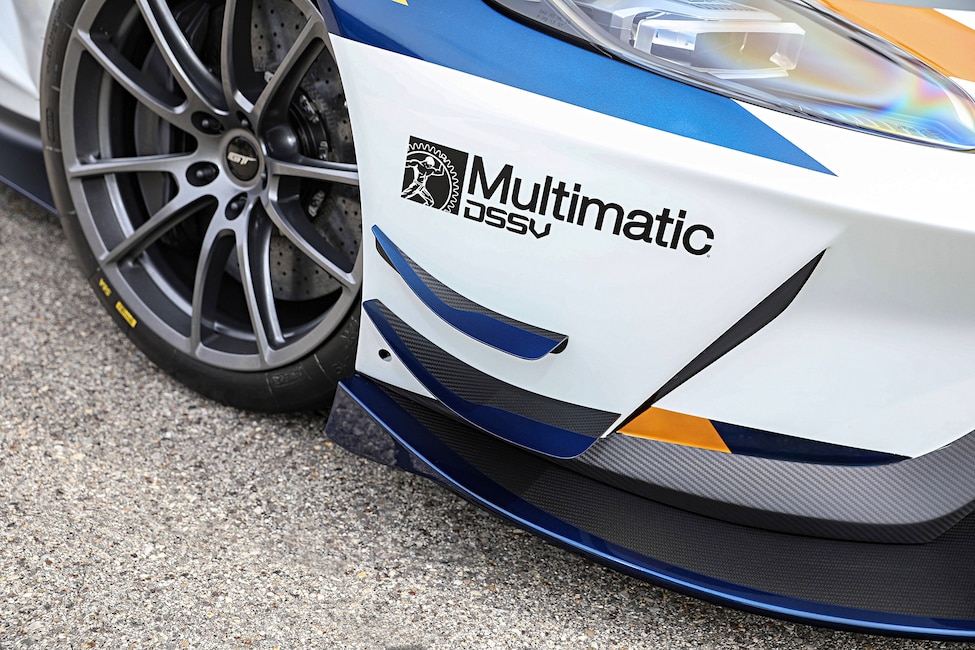 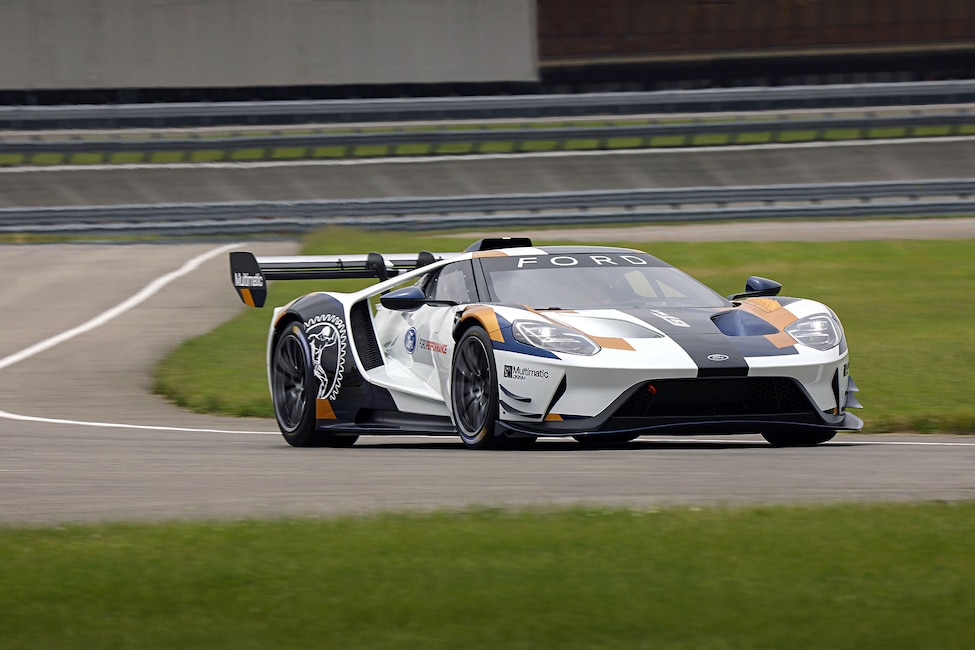 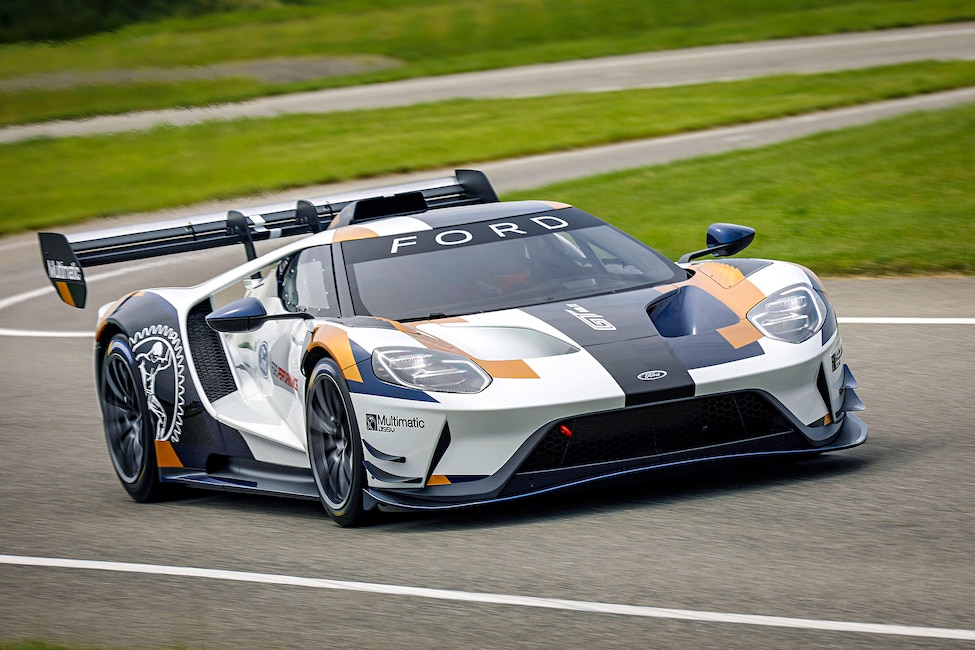 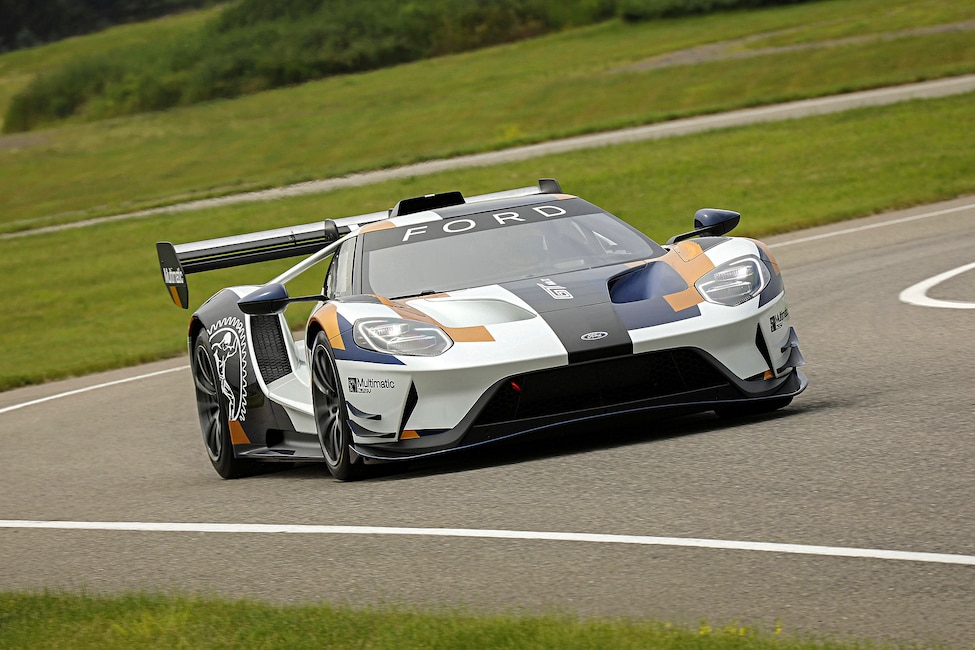 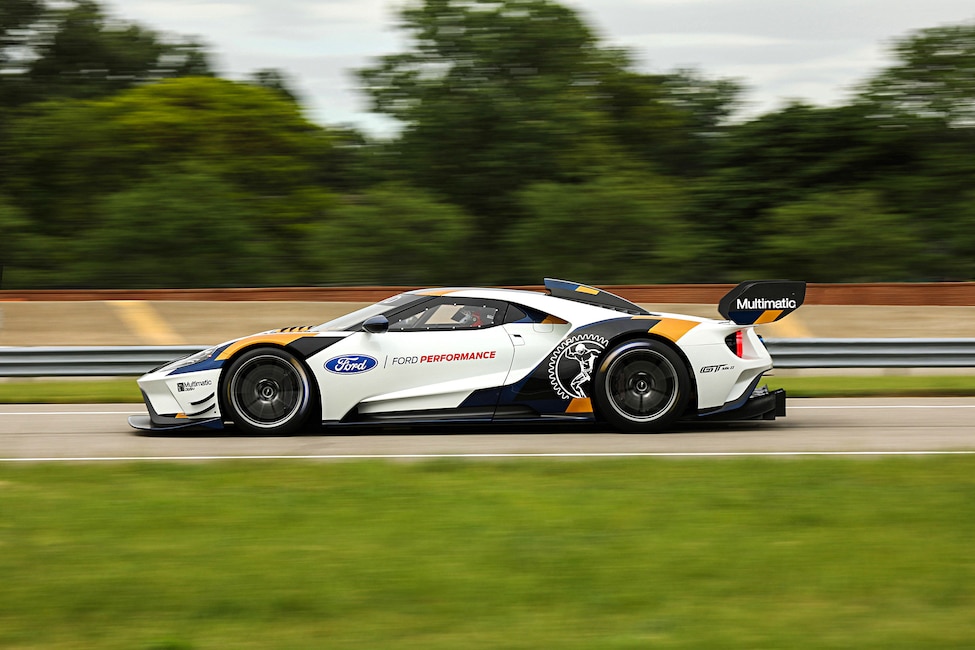