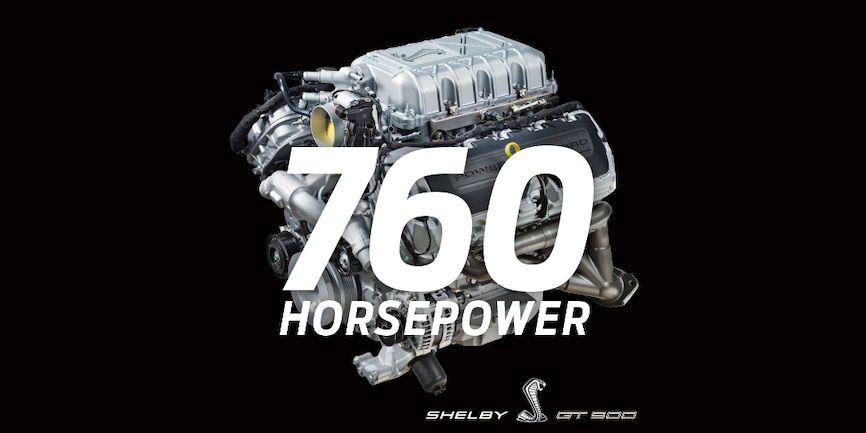 This week Ford began teasing its eager social media followers with that one number all Mustang fans have been waiting for — the 2020 Shelby GT500's official engine horsepower. What started as a Twitter puzzle ended in a glorious video of a GT500 revealing its output in rubber on pavement.

Long touted as the most powerful street-legal Ford production car to date, the official specs were one of the few details the Blue Oval had yet to share until now. Engineers kept toiling until the eleventh hour to extract as much performance as possible from the supercharged Predator 5.2-liter engine. The result is what the company calls the most "the most power- and torque-dense supercharged V-8 engine in the world." Backing up that claim are official peak outputs of 760 horsepower and 625 lb-ft of torque.

Those numbers are 98 horsepower better and 6 lb-ft shy of the last Shelby GT500 built back in the 2014 model year and powered by the supercharged 5.8-liter Trinity engine. While the latest Shelby's credentials aren't quite Demon-level peaks, the Predator's venomous output of 2.41 horsepower/1.98 lb-ft of torque per cubic inch is certainly potent.

To arrive at those levels engineers started with the basic 5.2-liter architecture used for the Shelby GT350's Voodoo 5.2-liter engine and bolstered it for boost. The block received more structural ribbing and longer head studs for more cylinder head clamping force to seal the four-layer head gaskets. The oil pan is not only fitted with hinged baffles to control oil under g-load, but it adds structure to the block as it joins with the Tremec dual-clutch transmission. Meanwhile the heads received more rugged exhaust valve seats for the boost application, and of course, this engine uses a traditional cross-plane crankshaft for smooth running at high rpm.

Adding the kind of thrust needed for a broad powerband, the 9.5:1 Predator 5.2 gets 12 pounds of boost from a new supercharger based on Eaton's vaunted 2560 rotors. This 2.65-liter blower feeds boost through a bar-and-plate intercooler residing atop the rotors. This arrangement is designed to deliver consistent performance even during extended track outings.

"We are very proud of the engine, the supercharger, and all the structural enhancements to durability in a track environment to the engine itself," Ed Krenz, Chief Functional Engineer at Ford Performance, told us previously. "To be fair, we have done supercharged engines before, but to get that power and torque to the wheels is that seven-speed, dual-clutch transmission, which is first in segment. That transmission is all new from a clean sheet of paper that we designed with Tremec as the supplier "

Putting down that power is obviously key to making this car perform no matter what its output credentials are. Now that the big numbers have been revealed, it isn't the end of the intrigue when it comes to Ford Performance's halo Mustang. Enthusiasts will move on to wondering about top speeds, road course lap times, and quarter-mile elapsed times.

Of course, the real question remaining is what it's like to drive the most powerful street-legal Ford to date, and we are definitely here for that. In the meantime, expect the order banks to open soon, so get your wallet ready.

After months of teasing its output as over 700 horsepower, Ford Performance revealed the official peak output of the Predator 5.2-liter engine as 760 horsepower and 625 lb-ft of torque.
We recently shared a few details we spotted under the hood of the 2020 Shelby GT500, but we now know that Ford describes its supercharged 5.2-liter engine as the "most power- and torque-dense supercharged V-8 engine in the world."
To reach its lofty output, the Predator 5.2 benefits from a 2.65-liter supercharger based on Eaton's 2650 rotorpack. It supplies boost to the engine through a bar-and-plate, air-to-water intercooler.