Gordon Hume originally passed on this S197, but it was destined to be his. 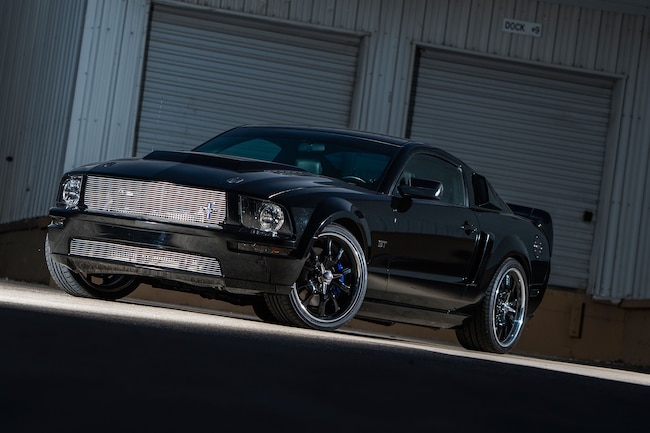 When the S197 platform was released in 2005, the performance aftermarket latched on to the car in a way it had never done in the past. New and exciting go-fast components were being released on a seemingly daily basis. This was an extremely exciting time to be a Mustang enthusiast, but the performance world was evolving right before our eyes. During the late '80s and early '90s, if you have a 12-second Mustang it was extremely impressive. But the car had come so far, and in the right hands the S197 was a solid 12-second car off the showroom floor. When you added (insert any of your favorite speed parts here), horsepower increased, and track numbers dropped. The days of easily owning a 10-second street car were here, and here to stay.

Occasionally in life, things are just meant to be. Call it fate. Call it luck. Either way, sometimes the universe simply brings things to us for a reason. As fate would have it, Ohio native Gordon Hume contemplated buying this sinister 2006 Mustang GT on eBay Motors in 2011, but passed on it in favor of a super low-mileage supercharged 2002 Saleen Mustang. As time went on and Gordon wanted to make the car faster, he struggled with modifying the pristine special-edition Pony. In the end he decided the car was too nice to change, and two years later the universe stepped in. While cruising eBay Motors once again, a familiar black S197 popped up for sale. But the second encounter ended with a different result. Gordon became the new owner and quickly set out to build the Mustang he had always wanted.

Under the hood you quickly see the business end of this Pony. A built Three-Valve 4.6L lives between the frame rails and is fed compressed air from an F1A centrifugal supercharger from ProCharger making 21 pounds of boost.

Gordon's build plan was centered around boost, but that meant the Three-Valve 4.6L needed some upgrades. For this, he turned to the experts at DSS Racing in St. Charles, Illinois. The factory Three-Valve block was filled with a forged Kellogg crankshaft, Manley Performance connecting rods, and DSS Racing pistons. The short-block was then stout enough to handle forced induction, but with the engine apart, the cylinder heads were in need of an upgrade as well. Gordon ditched the factory castings in favor of a set of CNC-ported Three-Valve heads from Ford Racing. The heads were finished off with a set of Comp Cams camshafts, measuring 0.549-inch lift on the intake side, and 0.546-inch lift on the exhaust. Duration at 0.050-inch life measured 238/246 respectively, with a 115 LSA.

Extra oxygen is force-fed into the engine by ProCharger's F1A centrifugal supercharger. The air charge goes through a custom intercooler before the 21 pounds of boost enters the intake manifold. With all the added air, the fuel supply needed to be upgraded to allow the engine to make all that extra power. Twin Walbro 465 fuel pumps supply fuel to a set of Injector Dynamics ID1000 fuel injectors, and fuel pressure is controlled by a Fore Innovations fuel pressure regulator. Once the air and fuel is mixed and the combustion process happens, exhaust gasses exit through a set of JBA 1 5/8-inch long-tube headers into a 2 -inch X-style mid-pipe. A set of Flowmaster Delta mufflers gave the S197 a super aggressive tone to match its equally impressive power output.

In a world of highly modified Mustangs, it's difficult to truly have a car that stands out in the crowd. Gordon's mix of classic good looks with modern touches works perfectly. The stance comes from a set of JDM Engineering drag springs and 20-inch Raceline wheels.

The factory ECU was remote tuned by John Lund of Lund Racing, all while the car was on the rollers at Finishline Performance in Milford, Ohio. The end result of this awesome combination was a stout 757 rear-wheel horsepower and 590 lb-ft of torque.

Harnessing this much power, especially on the street, can be extremely difficult. Traction will be very limited and having the right parts that can live behind this kind of power can be tricky. Power and torque are passed through a McLeod RTX twin-disc clutch before turning the gears in a Tremec TR6060 six-speed gearbox. The transmission was built by D&D Performance in Wixom, Michigan. There, the Walsh's put the right blend of strength and drivability together for Gordon to tear up the street and track without fear of breaking the transmission. A 3.5-inch aluminum driveshaft spins the 4.10 ring and pinion, which transfer power to the wheels through a set of 31-spline Moser axles inside the factory 8.8-inch rearend housing. The housing is upgraded with welded axle tubes, a CHE housing brace, and a Ford Performance Parts differential cover.

The driver's compartment is strictly business. The black leather interior is accented with carbon fiber touches. The Hurst short-throw shifter is the only hint that this is more than a mild-mannered Mustang.

Getting the power to the ground is a huge part of going fast. The car sits on a set of drag race springs from JDM Engineering, with a set of Tokico D-Spec adjustable shocks and struts. Twenty-inch Raceline GT wheels sit in all four corners with Bridgestone Potenza rubber connecting the car to the road. A set of GT500 front brakes help control speed and put the reins on this Pony when needed.

For Gordon, making power wasn't enough. The car needed to look the part as well. The exterior was upgraded with a Cervini's Eleanor hood with 2013-style TruFiber carbon hood vents. Gordon even fabbed his own aluminum surrounds on bottom side of hood to add an extra custom touch. Aerocatch flush mounted hood pins keep the hood secure at speed, and Cervini's upper and lower side scoops and ducktail spoiler complete the look.

The interior is by-and-large in stock form. Gordon added some tasteful carbon fiber accents to add a racy look that complements the Hurst short-throw shifter.

When you put the total package together, you're greeted by an incredibly capable Mustang that can be driven anywhere, raced hard, and driven home. The car has been a best E.T. of 10.58 at just under 130 mph.

Gordon tells us the car is truly an amazing all-around performer. He adds it's docile enough for his wife to drive, but fast enough to scare her in the process. His goal is to have a legitimate 9-second full-weight street car with A/C. With mid 10-second quarter-mile performance, he is well on his way! 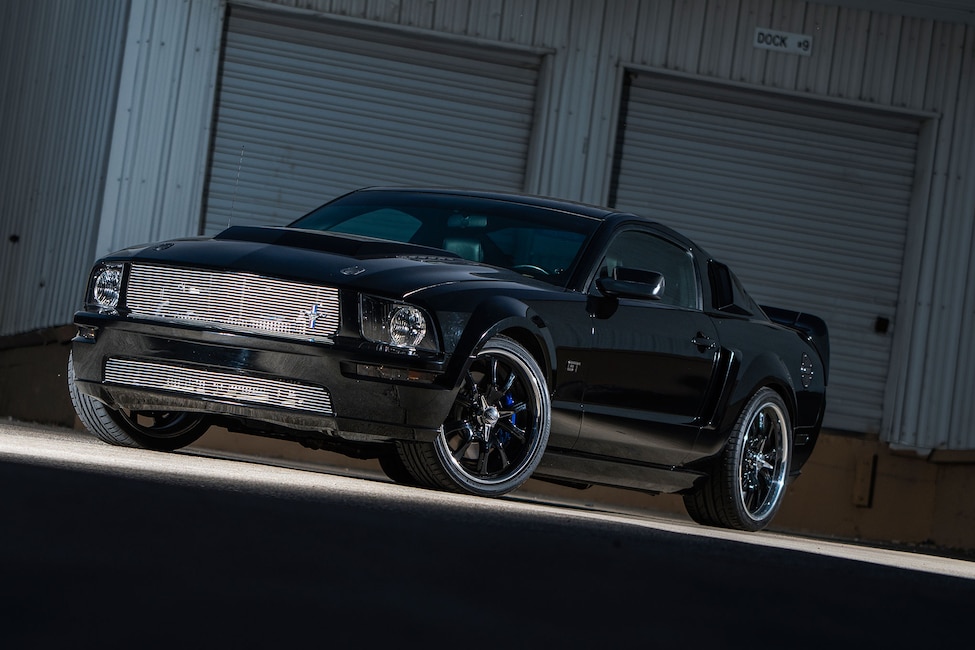 Under the hood you quickly see the business end of this Pony. A built Three-Valve 4.6L lives between the frame rails and is fed compressed air from an F1A centrifugal supercharger from ProCharger making 21 pounds of boost. 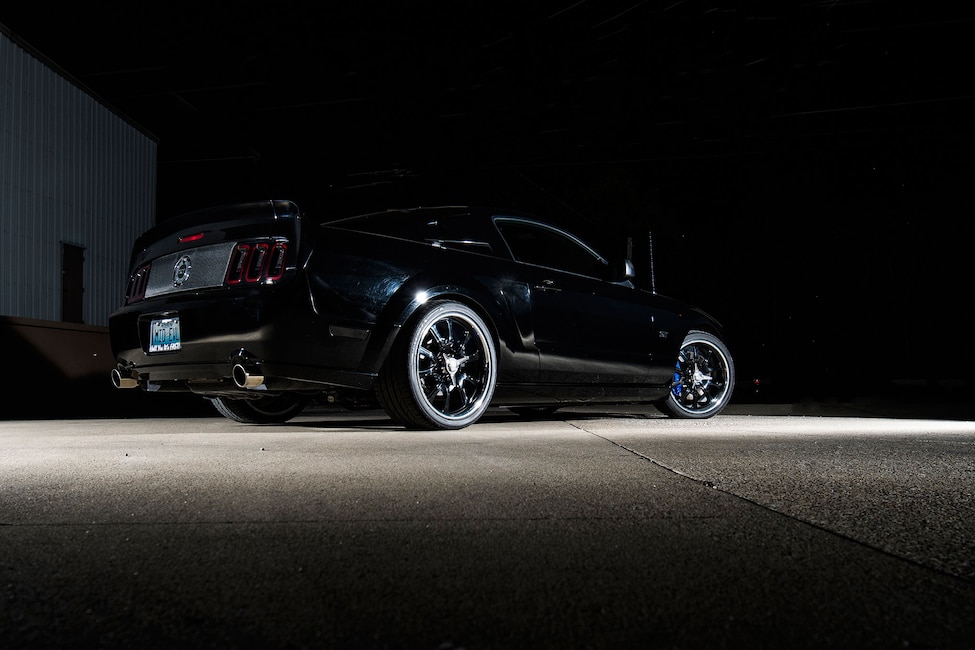 In a world of highly modified Mustangs, it’s difficult to truly have a car that stands out in the crowd. Gordon’s mix of classic good looks with modern touches works perfectly. The stance comes from a set of JDM Engineering drag springs and 20-inch Raceline wheels. 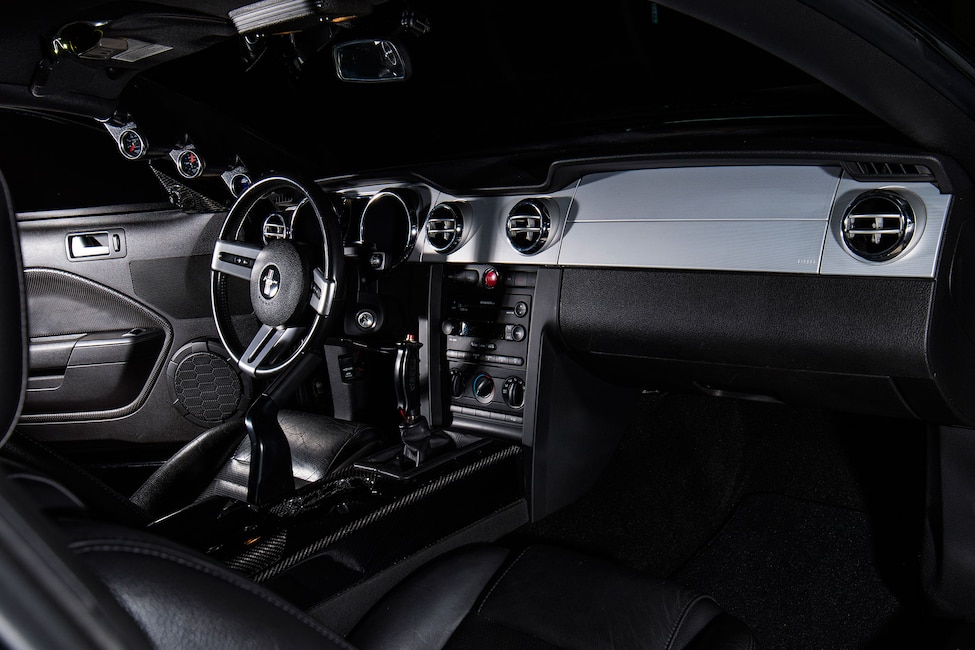 The driver’s compartment is strictly business. The black leather interior is accented with carbon fiber touches. The Hurst short-throw shifter is the only hint that this is more than a mild-mannered Mustang. 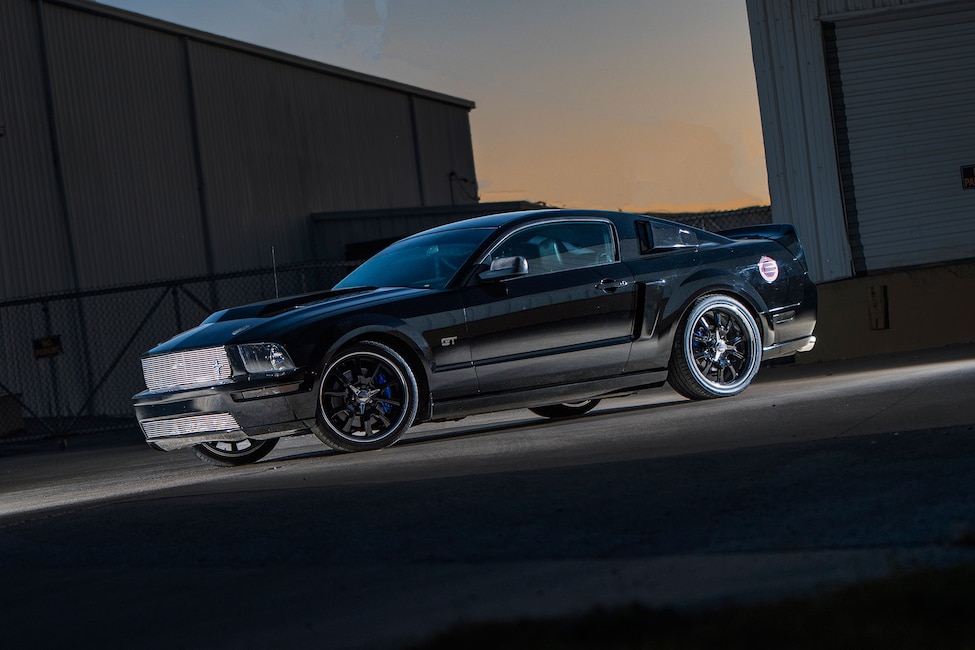 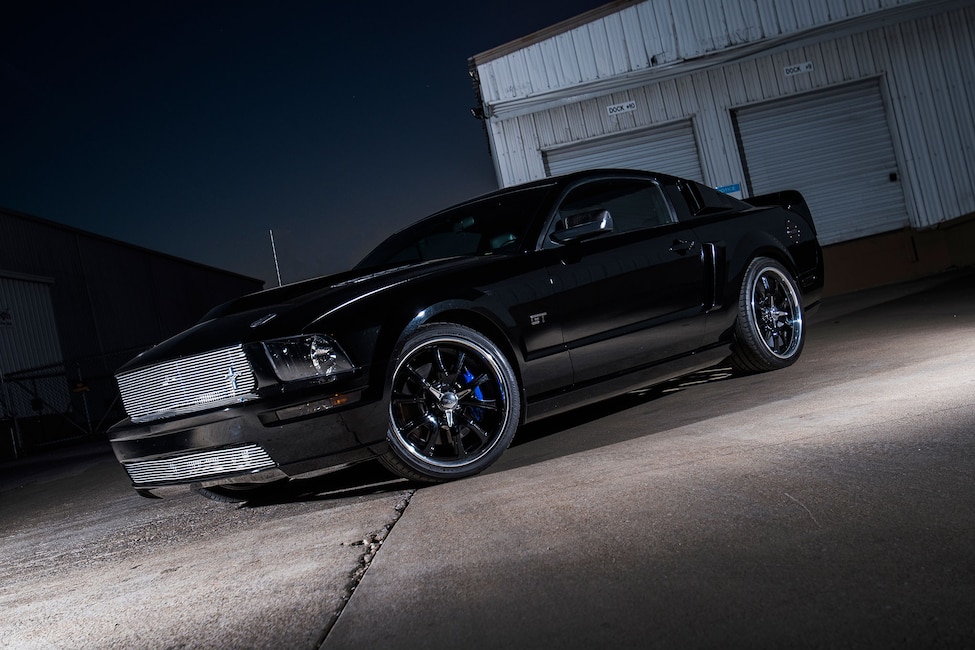 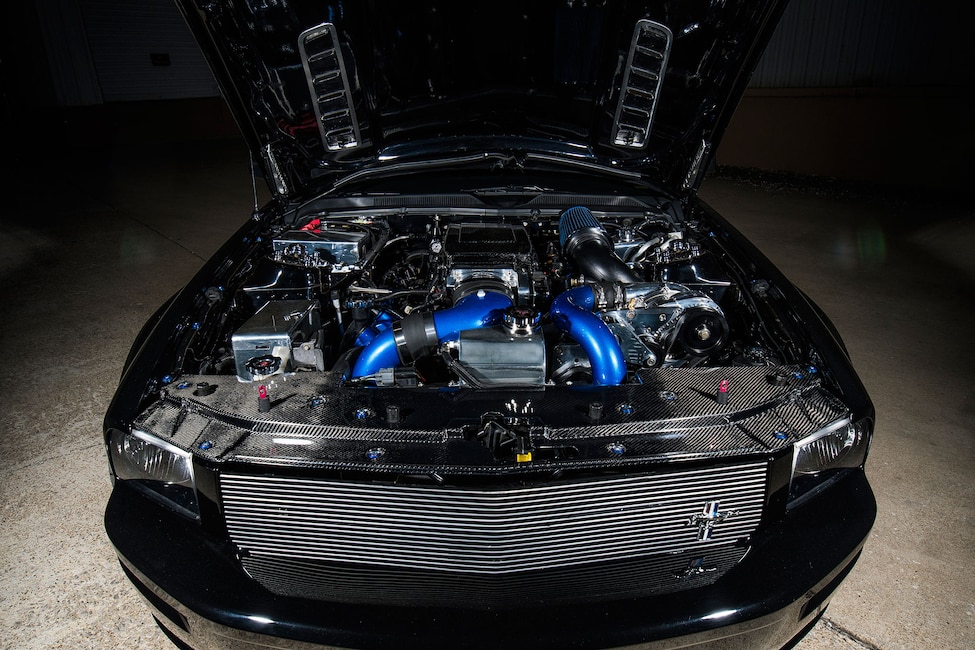