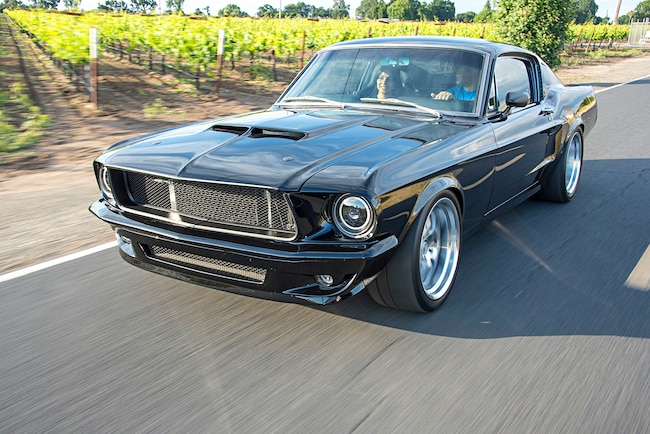 Many stories about project cars start with the familiar tale of an unfulfilled childhood yearning for a special make and model. The 1968 fastback owned by Jagdish Aulakh (most folks call him Jag) started out that way, but it took a sharp detour, one that nearly destroyed his plans.

After graduating from university, he and his eldest brother, Balvir Singh (nicknamed Billy and a professional mechanic by trade), began scouring the Internet for a deal on an aging Mustang. With Billy's substantial skills, Jag says, "I knew that he would be able to help me restore the car—even if it was in rough shape."

They found one on eBay in April of 2005 and decided to bid on the car. "Initially, I actually lost the bid on the car," Jag recalls with a wince, "as someone beat me at the last second." Well, whoever won the auction did not go through with it and that deal fell through, so the owner of the car emailed Jag to ask if he was still interested.

"I jumped at the opportunity to get the car," Jag says. "Without looking at the car I bought it and had it shipped to Manteca, California." He justified his impulsive decision by reasoning, "After all, it was a '68 fastback—how could I pass up on that?"

The car was from Alaska and had suffered through some harsh winters there—road salt corroded the front framerails and other chassis components. Jag's parents were not too excited when they first saw the car, but Billy reassured them that he and Jag would work together to restore it.

The car came with drum brakes, so one of the first things they did together was update the front ones to discs and tune up the engine so Jag could drive it around town. When they ordered the disc brake conversion kit from Mustangs Plus in Stockton, California, they came across a magazine feature on a 1965 "convertible coupe" called the Ronster (considered to be the first mainstream restomod-style Mustang build, as noted by Mustang Monthly Tech Editor Mark Houlahan). Jag really liked some of the ideas applied to that car and started researching what he wanted to be done to his '68 fastback.

"It was a really exciting time for me, embarking on this journey with my brother," he notes. Since they both had day jobs, they would only get one or two weekends out of the month to work on the car. "I thought that over months and years we would restore the car to its glory," Jag notes. But fate had other plans. On Labor Day weekend, in September 2005, Jag's brother passed away unexpectedly, and it seemed that the dream and passion for restoration of the fastback died with him. "I just parked the car at my parent's place, since I had no desire or directions on the project," he admits. "It was too much for me at that time."

Over the years, Jag's parents would occasionally let him know that so-and-so saw the car and they were interested in buying it—if he would like to sell the car. "But I had no desire to part ways with my '68 Mustang fastback," Jag insists. "No matter what anyone said or how much price was put on the car, my answer was always 'No!' Part of the reason is that this was an unfinished project, my brother's dream and mine. Not even a single thought crossed my mind to part ways with the car. After all, this is for my brother also—wherever he might be."

Eventually, after grieving for a time, Jag was able to get the project back on track. During its storage at his parent's house, the car's mechanicals had begun to deteriorate. "It was not until February of 2016 that I looked at the car and decided that it was time to restore this ugly rust bucket into a mean street beast," he says.

Jag revisited his memories about the Ronster and tracked down the firm that originally built and restored it, Precision Machine in Lodi, California. (Regular readers will recall that we've featured a Shelby G.T. 500 and the most-raced G.T. 350 from this shop.) When asked about helping with the restoration of the car, Precision's Kevin Sittner told him to just bring it on in. Jag's original intention for the restoration was to transform his fastback into a '68 Eleanor, but there were way too many of those out there already, so he wanted to stay away from that well-worn approach. With help and guidance from Kevin and his friend Reuben Kobrin, along with some vivid renderings by Reuben's brother Josh, he found a fresh direction that would do his brother proud.

After getting the car to Kevin's shop, the first thing his crew did was strip it down to bare metal and see how much rust was there. Seeing how much material had been eaten away, Kevin recommended that the entire front clip be replaced with a Chris Alston's setup. While doing so, they determined that the original 351 Windsor in the engine bay was not going to cut it. Nor would the automatic transmission. "It's a sports car—gotta have a manual transmission," Jag wisely points out.

At this point, Jag had to decide whether to go with a 427 big-block V-8 or stay with a small-block. After a lot of thinking he chose to go with a big-block, which Kevin already had (a Shelby 427 aluminum block at that), but with a massive displacement. This naturally aspirated engine is stroked to 575 cubes with Scat's 4.125-inch forged crank. It swings RaceTec flat-top pistons custom-built for this application. The Dove heads flow with SI stainless steel valves actuated by a Comp hydraulic cam and rockers.

Since Jag was going with a broad-shouldered torquemeister, he decided to get rid of the shock towers for ample space in the engine bay. And he had another specific requirement. As Kevin puts it, "He wanted to create a high-tech engine compartment with an old-school FE big-block."

"From the get-go, the engine had to be fuel injected," Jag relates. I did not want to deal with a carbureted fuel system." So that required installing FAST's self-tuning EZ-EFI 2.0 box to monitor the fuel and ignition. Sitting atop the Edelbrock Performer intake is a FAST throttle body with eight micro injectors, each sequentially fired. For the transmission, he went with a Tremec six-speed T-56 Magnum backed by a McLeod RST dual-disc clutch with a Quicktime custom bellhousing, plus a 3.70:1 rearend.

With 600 horses on tap, better brakes were a necessity as well. Kevin advised switching to 14-inch Baer binders with six-piston calipers. Of course, fatter rubber was needed to put the power to the ground. Since the car was apart, a mini-tub made good sense, especially when also installing Alston's G-link suspension later.

For the exterior, as already noted, Jag wanted something unique. He had Kevin and Reuben modify the nose with a one-off, fiberglass front valance fitted with an expanded metal mesh in a honeycomb pattern. They also crafted subtle side ground effects, so the edges didn't look rounded. Since they were doing something totally custom, Kevin suggested getting rid of all the scoops and replacing them with scallops on the C pillars. At first Jag didn't like the idea, but after seeing how it would look in the renderings he was convinced. To make the car look sleeker they decided to trim down the trunk spoiler and quarters.

"Less is sometimes more," Kevin notes. "It's not a wide-body, bad-boy racer, but instead more restrained with subtle flairs."

Lastly, the exterior includes a custom flat taillight panel with frenched-in '70 Mustang sequential taillights and a custom rear valance and exhaust tips surrounded by mesh. Once the bodywork was all done, it was time to pick a paint color, often one of the toughest decisions to make on a project car. While reviewing the renderings for the restomod design done by Reuben's brother Josh, Jag was torn between blue and black. His final choice was obvious, but not without first playing a prank on Reuben who was going to spray the car.

"Instead of telling him black, Kevin said that I wanted the car painted a peach color," Jag laughs. "He could not believe it but was glad I went with black."

The interior features Corbeau leather racing buckets with four-point harnesses. As expected from the rest of the car, the sound system is custom, with the help of Reuben. "I wanted a touchscreen media receiver system—no CDs," Jag says. "Besides, everyone uses their smartphones for music." While doing his online research, he discovered that Kenwood was coming out with a new model that was exactly what he was looking for. He had to wait about four weeks after pre-order of the new Kenwood DMX905S that had all the goodies he wanted.

Jag's first drive of the car took place during our shoot near Kevin's shop, and he capably manned the wheel with his lady friend Jas at his side. Both were all smiles at the stunning performance of the car and it hadn't even been completely sorted out yet. One more thing made all the difference: Jag could feel that Billy was riding right there with them.

Replacing the aging, original 351 Windsor was an aluminum Shelby 427 big-block, stroked to a whopping 575 ci. A March serpentine pulley system spins all the accessories.
Rather than carbureted induction, electronic fuel injection is handled by a FAST self-tuning EZ-EFI 2.0 box and MSD's Digital 6AL ignition.
Rocket Racing wheels are wrapped with Nitto NT01 road course-compliant rubber (P285/35R18 front and P335/35R18 rear). Precision Machine managed to fit them under the stock fenderwells and still have a fold-down back seat, just slightly cut down.
Custom leather and suede cover the Corbeau racing buckets.
The cockpit is customized with Classic Instruments gauges, Vintage Air A/C with heat, and a 2,000-watt entertainment system. The shifter actuates a Tremec six-speed T-56 Magnum.
A Chris Alston's Chassisworks suspension with a G-Link rear setup modernizes the ride, along with 14-inch Baer brakes with six-piston calipers. The rearend has a nodular-iron case with a Detroit Truetrac 3.70:1 gear ratio.
Jag and his lady friend Jas upon their first drive in the newly redone Mustang.
The '68 was updated with a 1970 taillight panel with frenched-in '70 sequential taillights, a custom rear valance, and exhaust exit tips. And check out the subtle, custom "ground effects."