The Love Of The Chase 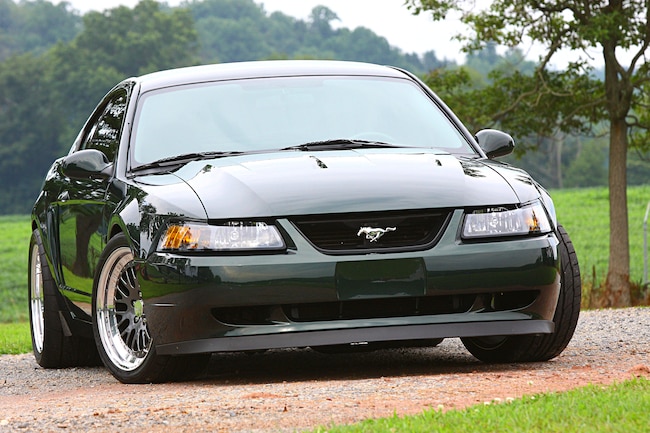 The car chase. It has become one of the most exciting, intense, and electrifying pieces of cinematic pop culture to ever exist. Few things bring people to the literal edge of their seats the way a good car chase does. It embodies so much. The battle of good vs. evil, freedom—which is seemingly a few turns or an extra couple of miles per hour away, yet almost always just out of reach, trying to outsmart your adversary. Whether you route for the fleeing suspect or the officer giving chase, the innocent victim desperately seeking safety or the villain trying to pull off the perfect crime, the car chase is what always seems to give automotive enthusiasts common ground.

The interior is simple and clean. Aside from upgraded seats, little is different from how this Bullitt rolled off the assembly line.

When you start to compare chase scenes, many come to mind. Whether it's The French Connection (which was actually filmed in real traffic unbeknownst to the public) or Duel, your favorite Fast and Furious movie or Gone In 60 Seconds (old or new), no cinematic car chase has been more legendary than Steve McQueen in Bullitt. His driving ability combined with amazing cinematography made him and the movie legendary. So much so, Lt. Frank Bullitt's Mustang from the film has been immortalized in a trifecta of special-edition Ponies.

Dark Highland Green is an iconic color. When you add aesthetic touches from the 2001 and 2003 Cobra and 2003 Mach 1, you have an absolutely amazing looking Mustang!

Dark Highland Green. If you didn't know the color's name, you certainly know the iconic hue. The 1968 Mustang 390 GT 2+2 Fastback driven by Steve McQueen made the car and the color part of pop culture history. Fast forward 33 years and Ford made the bold, yet amazing, decision to produce a special-edition Mustang to pay homage to the iconic Pony from the silver screen. The Bullitt edition Mustang was released for the 2001 production year and had a run of just fewer than 5,600 units. While most were painted Dark Highland Green, black and True Blue versions were available, but in relatively low numbers.

The car rids on a set of CCW Classics with gunmetal centers. This is a throwback to the look of the original Torque Thrust wheels.

Which brings us to the Bullitt you see here. Ben Smith, an Air Force Jet Propulsion Craftsman from Stephenson, Virginia is the man responsible for the awesome special-edition New Edge. If you know late-model Mustangs, you know the Bullitt isn't a run-of-the-mill Pony. The Bullitt's came from the factory with a blend of performance, exterior, and interior upgrades, which differentiated them from the GTs and Cobras prowling the streets. For some, the extra power and unique enhancements are enough. For Ben, this was just the beginning.

"I bought the Bullitt from the daughter of the previous owner after he passed away," explains Ben. "His name was Bob Taylor. He had completed the '03 Cobra [engine] conversion in 2007. I fell in love with the car after making the road trip to Georgia to pick it up. But the car needed some work to take it to the next level."

"The next level" wasn't far off. Ben tells us the car already had the supercharged 2003 Cobra engine and T56 6-speed transmission, along with a built solid axle 8.8-inch rearend, but he wanted more. As soon as he got the Bullitt home the rear bumper, side skirts, and scoop deletes were removed and repainted. At the same time, Ben added a set of color-matched 2003 Cobra side mirrors. The wheels were swapped for a set of True Forged Victories and the car was lowered for a more aggressive look. The headlights and chin spoiler were replaced finishing the aesthetics, and the exhaust was upgraded, making the car sound as aggressive as it looked.

"The ride was much more aggressive back then," Ben tells us. "With coilovers in all four corners, the car was set up for road racing. I was at Excessive Motorsports one day and the shop owner's wife saw the car and fell in love with it. An offer was made, and I accepted it. The deal was contingent that if she ever wanted to sell it, I would have first chance to buy it. This would happen about 10 months later."

Once Ben took possession of the Bullitt for the second time, he quickly began to make more changes. He picked up a built '03 Cobra IRS from the owner of Excessive Motorsports, which took this Pony's handling abilities to the next level. The rearend conversion was done at Brad's Performance & Repair in Martinsburg, West Virginia. While it was there, the rolling stock was replaced with a set of CCW Classics with gunmetal centers to mimic the factory look of the Torque Thrust wheels. A set of American Racing Headers stainless long-tube headers, and X-style mid-pipe replaced the factory manifold, and a MagnaFlow cat-back completed the exhaust.

Next, Ben replaced the supercharger. The fuel system was upgraded to feed the engine for its newfound airflow. A Fore Performance dual-pump setup feeds a set of 1200cc injectors. The fuel system changes were made to accommodate the additional flow needed for E85. With the engine bay apart, the battery was relocated to the trunk, and most of the wiring and plumbing in the engine was hidden. The engine bay was accented with many parts being painted hot rod black to give it a clean, yet menacing look. Inner fender panels from Scott Rod Fabrication were added, along with new factory valve covers, and a JLT Performance cold-air intake, all painted Dark Highland Green.

When the combination was complete, the car headed back to Excessive Motorsports for tuning. Cranking out 20 pounds of boost, the car made a conservative 711 rwhp and 636 lb-ft of torque. This simple, yet powerful combination is more than enough to handle and chase or getaway!

"I love all of the subtle touches and comments the car receives on a regular basis," Ben adds. "There are numerous plans still in store for this build, and I'm definitely keeping this one in my stable for many more years!" 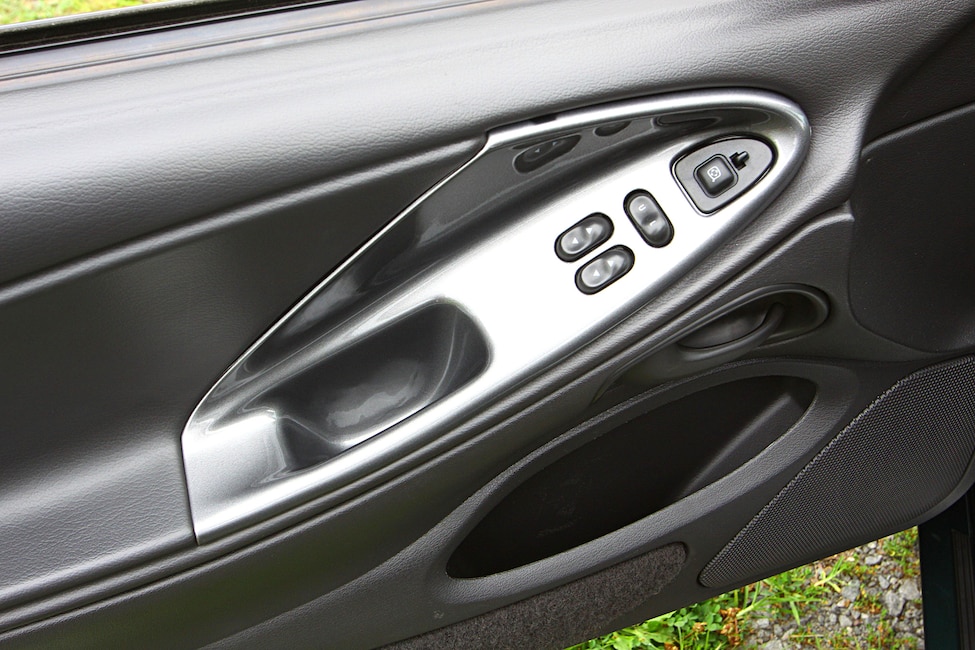 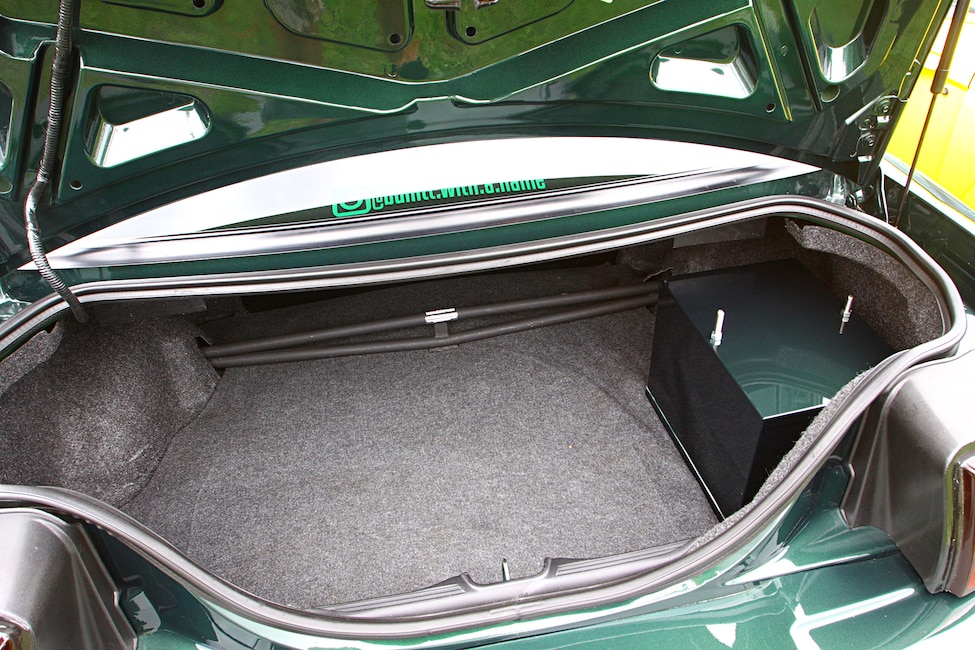 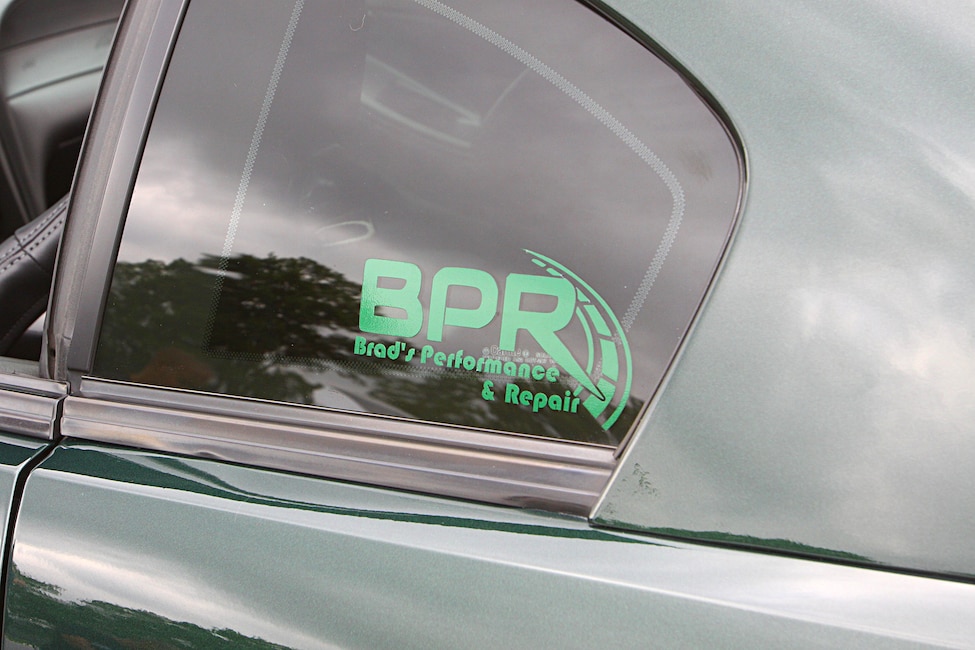 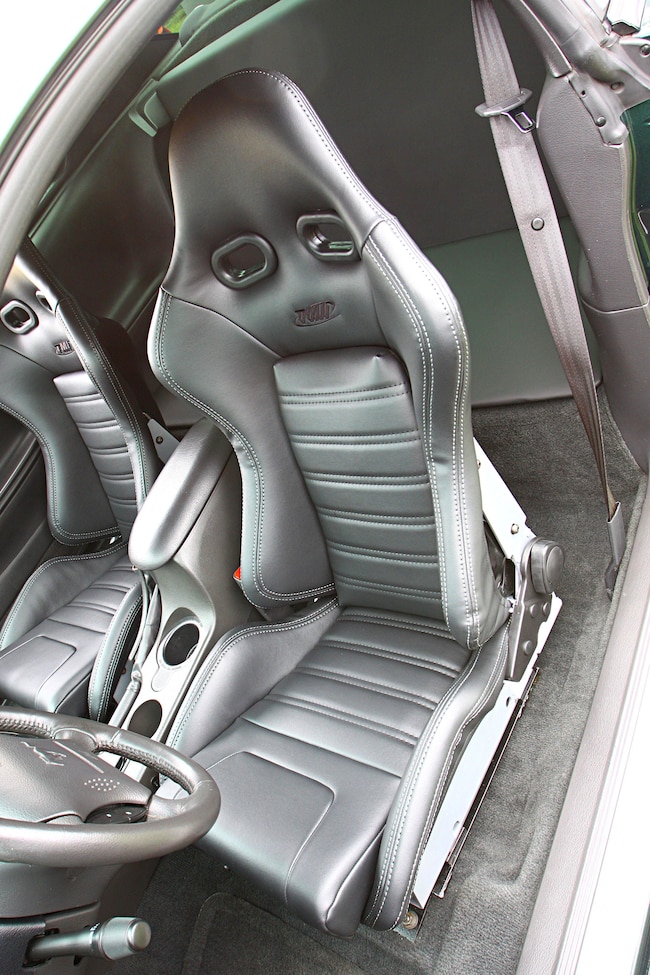 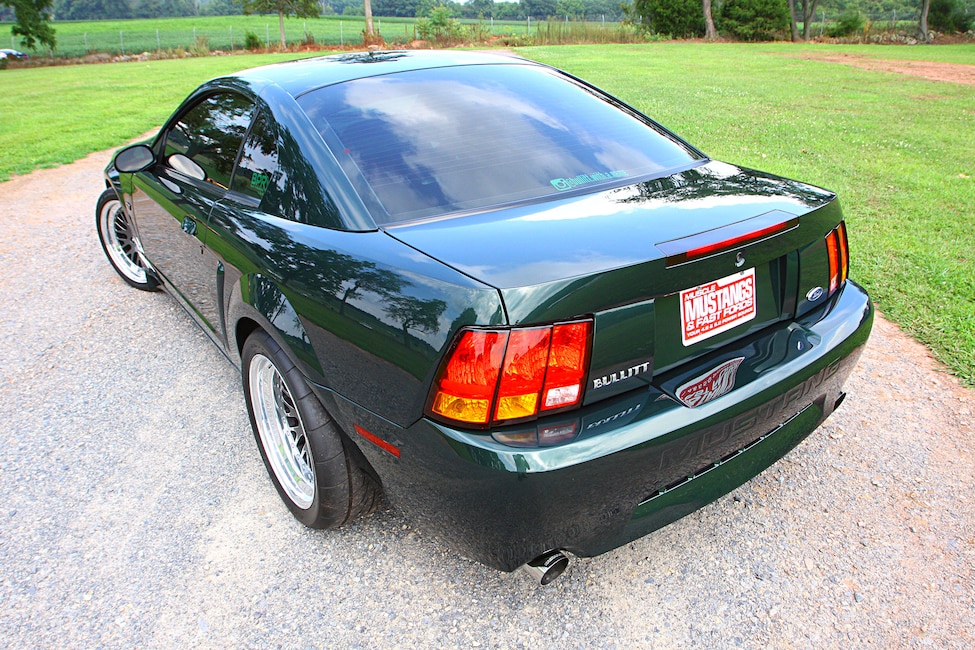 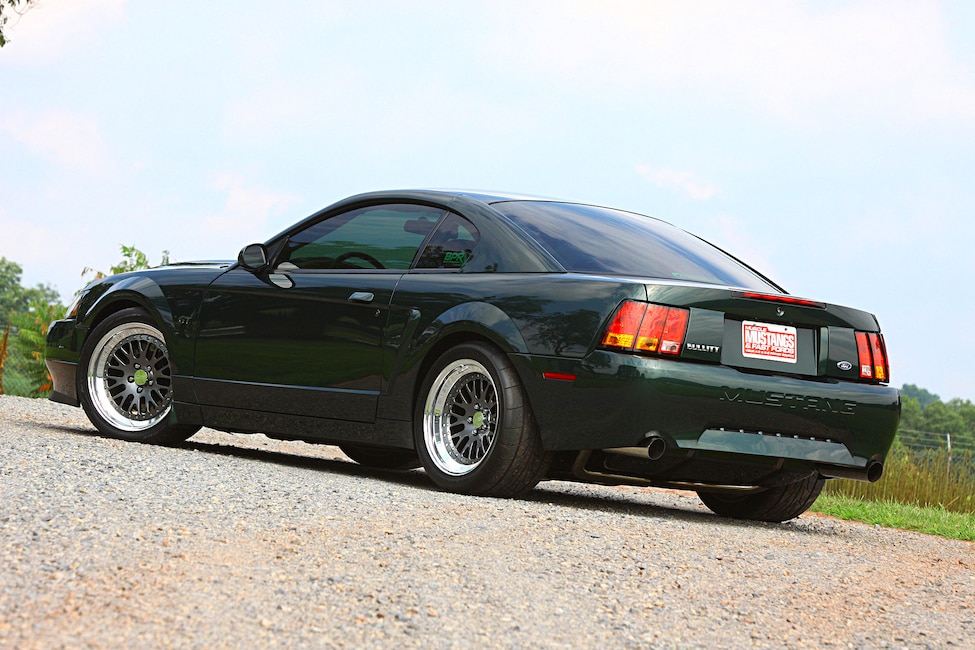 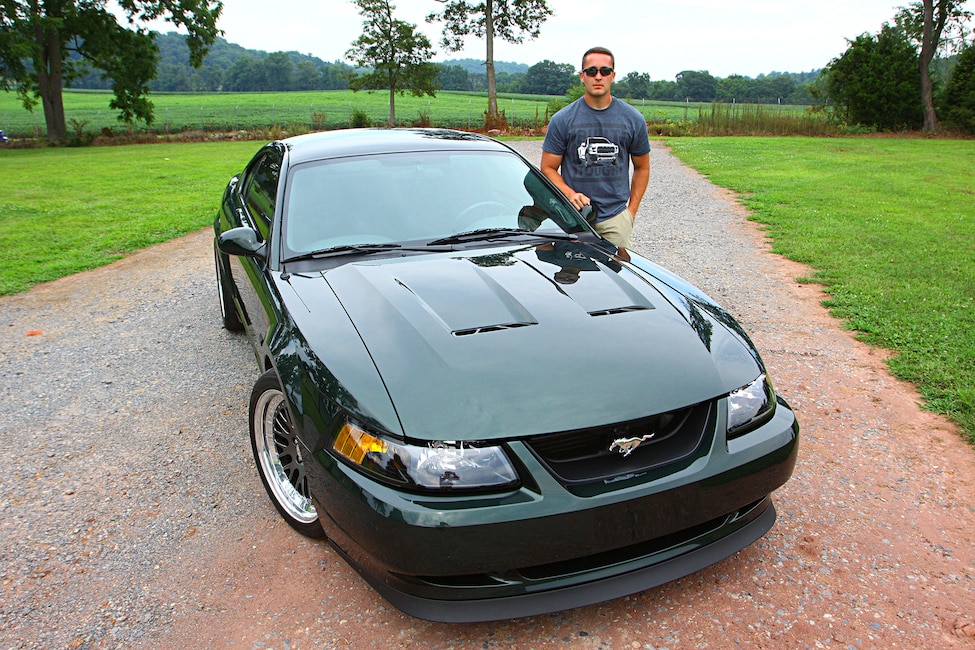 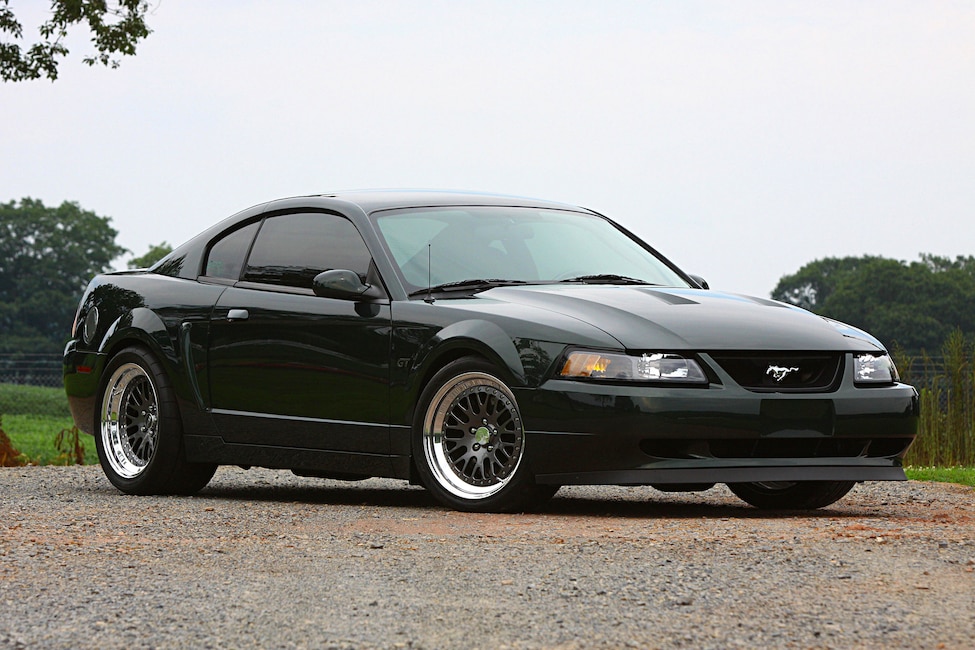 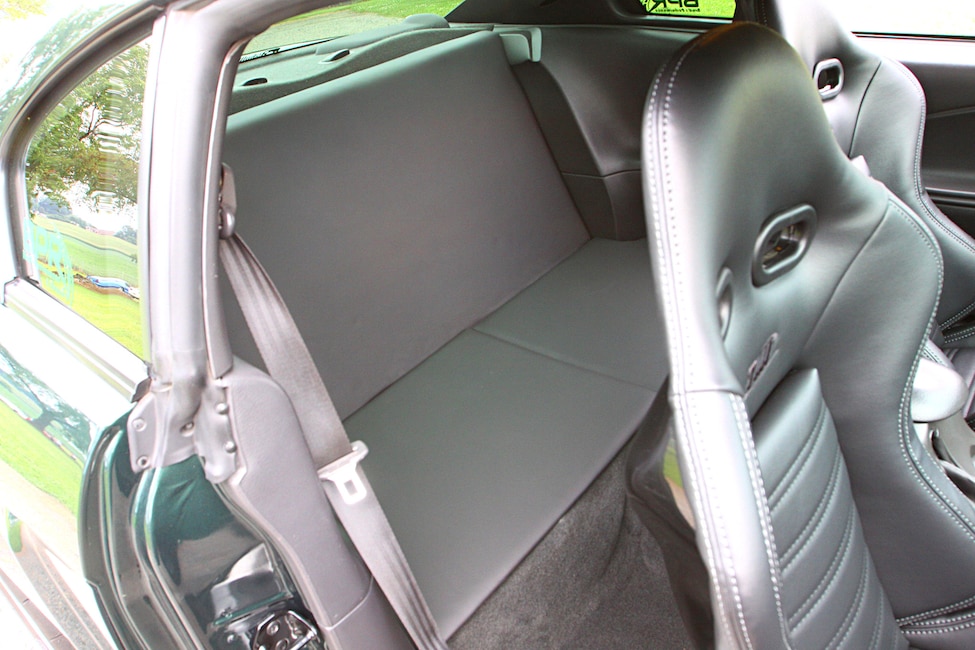