The End of the Big-Block Era for Mustang

End of the Road 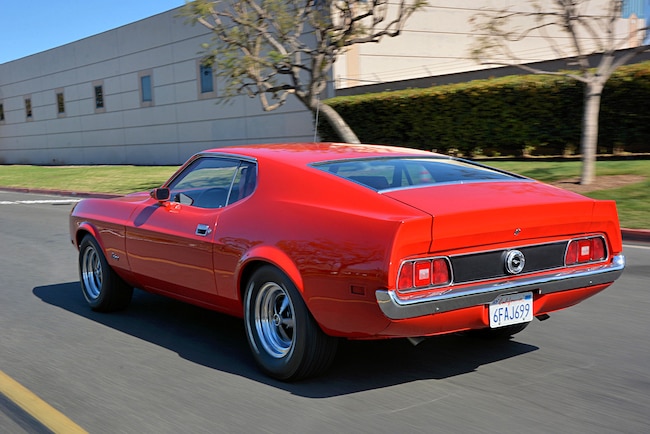 The year 1968 pitted factory-sponsored drag teams against each other, encouraging them to pull out all the stops to gain the advantage. For Ford, the 428ci Cobra Jet Mustang made its competitive debut at the season-opening NHRA Winternationals in Pomona, California. In its first race, Al Joniec drove his Rice-Holman-prepared entry to an unexpected win among the four Cobra Jet entrants over Dave Wren's Max Wedge-powered Plymouth in the final round. Joniec posted an 11.49 best at over 120 mph in the SS/E class. While impressive 50 years ago, there are Mustangs, Camaros, and Challengers that you can drive off the showroom floor today, on street tires, that would put Joniec's Mustang right back on the trailer. We live in wonderful times today—don't we?

From the rear, the new-for-1971 SportsRoof body style is distinguished by its most notable feature, a nearly flat backlight contributing to the car's almost nonexistent view out the rear.

Ford originally planned to run its tried-and-true 427, an expensive engine to build. But plans changed to use the 428 engine first developed by Bob Tasca, one of Ford's most prominent high-performance dealers. Concurrent with the introduction of the Cobra Jet in competition, in April 1968 it became the top-dog performance street option on Mustangs, Cougars, and Ford's intermediates.

The Cobra Jet was offered in 429ci big-block form through 1971, just as federal emission standards and the insurance industry brought the hammer down on the muscle car era. In 1972 the Cobra Jet brand was applied to the 351ci option, relegating the big-block V-8s to Mustang history. That's what makes this car, a 1971 Mustang Cobra Jet, extra special; it's rare in that it is a base-model SportsRoof instead of the Mach 1.

While immediately identified as a Mustang with its single headlights flanking the horse in the front grille, the design was a total departure from that found on the 1969-1970 models that preceded it.

We started working on the story of this car over a year ago when we saw it on display. It was up for sale at Crevier Classic Cars in Costa Mesa, California. Alerted about the car by Crevier's sales manager, Frank Chirat, who owns a Shelby Cobra G.T. 500 himself, we used the opportunity to get the car photographed and documented, just in case the car got sold. And that's exactly what happened when Carl and Grant Amor bought the car in October 2018 when they were visiting Southern California from Australia. And as of the time we write this, it is being unloaded in Australia and is making its way through customs.

When we asked about how this car was acquired, here's what Carl had to say: "The acquisition of the Mustang was absolutely an accident and definitely an impulse. We had met up with a couple of friends in Los Angeles on our way to Canada for business. We had about six hours to kill so after grabbing a burger we set off to buy some parts for our recent purchase of a one-owner 1958 Corvette. After doing that we still had about three hours, so I searched 'internet+classic+car+sales' near me and up popped the Crevier Classic Cars site. I looked at the site and said to everyone let's go here as it looks impressive, and it was just 15 minutes from where we were eating."

Carl continues, "When we arrived and walked in the door it was more than impressive and we were all stunned, with very impressive cars. Our group all walked around for about an hour or so in different directions until Juice, one of our friends, called out and said come look at this. We all wandered over to the Mustang and read the info sheet, did some checking on the Net, and within 30 minutes the car was ours. We walked out very happy with our purchase and the fantastic service. Juice stopped to look at a 1952 Lincoln that was on display out front. We had all walked past the Lincoln on the way in. As with the Mustang, we all looked at it, talked about it, and then Juice went back inside and bought it. So, in the space of two hours that we needed to fill time, we bought two fantastic cars. We talked about it on the way back and decided that four guys shopping together is more expensive than letting our wives shop, but that's a secret and we will never admit we said that."

The Mustang wasn't a blind purchase for Carl and his mates. Carl was familiar with big-block Mustangs, having owned a 1969 Mustang Boss 429 some years ago, and that was one of the two cars they sold. What really got Carl interested in this particular car is that, with its combination of options, it's a one-of-one car—and, of course, it's in amazing condition. Carl is an American car enthusiast, and he knew it represented the end of the Mustang big-block era. He bought the car without having the opportunity to drive it. Time was tight and they were just killing time awaiting their next flight after all. We wonder if Carl and his mates know this American expression: You snooze, you lose!

While this SportsRoof Cobra Jet is a rare base model, it was equipped with a Mach 1 interior, which was a $130 option for the 1971 model year—seen here in Vermillion with contrasting black trim.

Readers of Mustang Monthly might not know much about Australian muscle car history, but it does parallel the U.S. experience. Carl explains, "Ford in Australia has a long and distinguished muscle car history in Australia, going back to the 1960s. A series of V-8-powered cars started with variations of the American Falcon compact. The collector car culture is very strong in Australia despite the costs involved in shipping and currency exchange. It has also seen some pleasing movements toward the younger generation, which I am happy about—as we all get older it is nice to see the new generation take an active part in restoring these magnificent vehicles. Australians have a fond desire for all things American and cars are a huge part of this fondness, with many thousands of American automobiles in Australia."

The last couple of years have been tumultuous for the Australian motor industry, as Ford's and GM's affiliates have ceased operations (Chevrolet's current Camaro was developed off of an Australian rear-wheel-drive platform). "The Australian car industry was a massive part of the Aussie culture, with iconic cars from Ford and Holden leading the way," says Carl. "We had the Ford GTHO and the four-door Escort RS2000, both of which were only produced in Australia. Then GM Holden countered with the Torana SLR 5000 and the Holden Monaro (related to the Pontiac G8 and Chevrolet SS). That being said, the cost of wages and the cost of doing business in Australia being the biggest contributors to the fall of car manufacturing in this country. It is sad that this happened, but the taxpayers have long been subsidizing the automotive industry, making it uneconomical for not only the manufacturers but also the government trying to provide good-paying jobs."

The fold-down rear seat adds a degree of station wagon-like versatility not found in the hardtop and convertible models.

In looking at Carl's Mustang, a few things stand out. First, is that it's a base-model Mustang without any exterior stripes, not the Mach 1 trim level (although it has the Mach 1 interior trim package, a $130 option). Then, there is the combination of the 429 Cobra Jet engine with the Ram Air hood mated to the four-speed Top Loader manual transmission, a beefy 9-inch rearend, and its Bright Red hue with the Vermillion interior trim that make it a one-of-one car. As far as is known, it's lived its life mostly, if not always, in California, and in its five decades it has covered just under 23,000 miles. Except for the headliner and new front seat upholstery, both replaced with N.O.S. materials, it retains all its original, rust-free sheetmetal (although from what can be gathered, it has been repainted) and looks like a fresh-from-the-assembly-line presentation.

The original big-block Mustang era lasted just five years, from 1967 to 1971. And while we are sad to see this car leave the country of its birth, it looks like it's in great hands. Carl and brother Grant know full well that it's significant, and it will occupy a prominent place in their museum.

The Vehicle Emission Control Information label is original and confirms that this engine met the ever-tightening emission standards for 1971 (that in the years that followed would strangle out of existence high-compression, high-performance engines—until just recently).
The cover of the 1971 Mustang dealership brochure played on the theme of Ford's "Better Idea" marketing theme. Through the stylized light bulb, this design was carried out on each individual model's dealership brochure that year.
By the time the 1971 Mustang was introduced, Bunkie Knudsen was fired from Ford. The ever-loyal Larry Shinoda, who followed Knudsen from GM and who was responsible for the styling of the all-new 1971 Mustang, followed him to Rectrans, designing the company's innovative motorhomes.
Typical of the times and continuing the Mustang tradition starting with the first 1965 models, the dealership brochure presented a myriad of option choices allowing Mustang personalization.
The back page of the 1971 Mustang dealership brochure shows both 429 Cobra Jet options (CJ and CJ-R), and both are rated at 370 hp, even though the CJ-R version featured Dual Ram induction.

Mustang Girl Monday 1990 SN95
Fierce Ford Friday: Return of the Boss
Everything You Need to Know About NASCAR Ahead of the Daytona 500