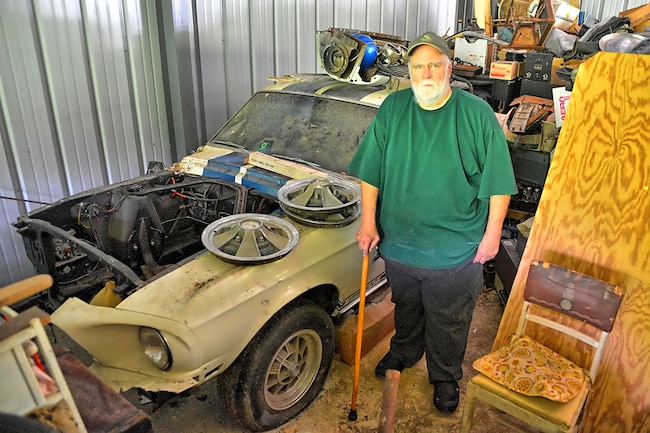 We expected to see a 1968 Shelby G.T. 500 fastback. Instead, when Matt rolled up the garage door, we faced a pile of debris swelling from 5 to 7 feet high and as wide as the entrance. "There's a car under there?" I asked.

"Two cars," Matt Belcher and his friend Jonathan Large said, almost in unison, and then they laughed. "A Shelby and a 1969 Triumph TR-6," Bill Sisco said.

We were high in the Blue Ridge Mountains outside of Floyd, Virginia, but exactly where I couldn't say. The road had wound higher and higher, turning from pavement to gravel, until our two vehicles were opposite a metal building that was 90 percent hidden by trees and brush.

"It's about 10 degrees cooler up here due to the elevation," Bill told me.

We could not walk into the building due to the pile of items in front of us. Instead, we entered through a side door of the L-shaped building, walked forward 10 paces, and then took two to three steps to the left to spy the prize: a 1968 Shelby that Bill Sisco, several years past 65, had owned since he was 19 years old.

Matt Belcher was the lucky buyer. He lived in the area, which is a big reason he got the opportunity to buy this buried treasure, but the two men did not know one another until this sale. Matt heard about the Shelby through his friend and fellow Ford fanatic Joey Horton.

"I think he kept it a secret for a long time," Matt said.

Horton first saw the Shelby about 20 years earlier. With the fascination of a UFO sighting, Horton recalled for us the instant he laid eyes on this '68 G.T. 500, saying, "I went to Bill's house to get a Willys Jeep and he had the door to his shop open. As he was loading the parts for the Jeep, I turned and saw the front corner of the car. I asked him, 'Is that what I think it is?' He said, 'What do you think it is?' I said, 'I think it is a 1968 G.T. 500. '" Joey tried to buy the white fastback, but back then Bill was intent on "fixing it." In the early 1990s he had pulled the 428 Police Interceptor big-block and sent it to a machine shop for a rebuild.

Bill had never been partial to the original Lime Green, but the person he hired to repaint the body a more favorable color of white (with blue stripes) turned out to be less than proficient at metal preparation and spray-painting.

"I drove it all through college, and then at 104,000 miles, I said, 'I'm going to quit driving it,' and that's what I did." Instead of selling the car, Bill stored what he described as "really the first car I drove." The caveat is a trio of 1949 Fords, "because you needed all those Fords to put together into one to make it drivable."

There are multiple reasons for not fixing up a car. Early storage in a dilapidated barn was not suitable for work. Later, Bill got married, which changed his priorities. One year turns into two, and before you know it, 47 years have passed by.

After removing all the debris stacked on the Shelby, Matt and Jonathan lifted the fiberglass hood (hinges not intact). The machined but disassembled 428 Police Interceptor was in another location, but while under the hood we checked out the original Shelby plate on the driver-side inner fender apron. The Shelby American Registry entry revealed that "00388" was shipped to Koons Ford in Falls Church, Virginia, on February 18, 1968. The present owner, the Registry chronicled, was our own William Sisco, and the G.T. 500 had previously been owned by Larry Middleton of Christiansburg, Virginia.

That's the same town where Bill first saw the Shelby. His wife, Mary, wrote in an email that she had known Bill since 1987, and she had been married to him since 1988—and in all that time she had never seen the car. However, she did know Bill had actually been sitting in the driveway of the Starlite Drive-In movie theater across the street from Hills department store on that fateful day. Six months later, in the winter of 1972-1973, Bill traded a '66 Ford Galaxie he had inherited from his mom, plus $2,200, for the '68 G.T. 500. He suspected the Shelby had passed from small car lot to car small lot, and the 428 didn't run well, so he tuned it up then drove off to college in his dream machine—a real Shelby Mustang he had wanted ever since a chemistry teacher in his high school bought a new '69 Shelby Mustang. Bill was in the class of 1970 in Arlington, Virginia.

Bill joined the Shelby American Automobile Club (SAAC) in 1977, which he recalled had only started up a year earlier in 1976, saying, "I needed a source for parts and the ads in the magazine were immensely helpful."

Back in the car's hibernation cave, Matt inspected the body and could find no rust. The car was in pieces, but it was all there. The Shelby was well preserved. To the extreme left of the mostly covered Shelby was another garage door that Matt opened, revealing trees and overgrown brush that would have to be cut down to roll out the Shelby. Furthermore, the Triumph, 100 percent hidden, was in the way of this exit. Going out the other garage door would require even more things to be removed. Bill exaggerated that pulling the Shelby would take 10 people working several days, so the car's extraction would have to come at a later date with more help and planning.

Why did Bill decide to sell the car and why was Matt the lucky buyer? What was the sale price? First, Sisco felt very lucky that he did not have to advertise the car. "I know [Matt] is local and intends to enjoy that car, and that's what I want. I did not want somebody flipping it and going on down the road." Sisco beamed when Matt said, "We were lucky to get it. Bill is going to be part of it, too. It will be back down here if I have anything to do with it. We definitely want to get him in it again."

Bill was more than at peace with the sale, saying, "Oh, I'm very happy about selling this car, very happy about it. I was really worried that I would have difficulty selling it, not because nobody would buy it but because I'd be inundated with offers from who knows where."

Neither he nor Matt wanted to disclose the price, which was a fair market value for its condition with room to put the Shelby back together. At least it's another rare and desirable Shelby Mustang that will see the light of day and miles under its tires once again.

About his Shelby, Bill Sisco wrote, "I decided that I would get it going again and drive it again, even though the paint was messed up. When I went to do this, I found that a freeze plug had popped out, and the only way to access it was to pull the engine. That engine is not easy to get in and out. It fits in the car about like 11 pounds of flour in a 10-pound sack—tight as tight can be. I decided instead to pull the engine and go through it and the transmission, as they had 100,000 miles on them. I knew it would have to be done sometime, and might as well do it all at once while I was fixing the freeze plug. I spent over $1,000 at the time for machine work and parts for the engine. By the way, it is the original engine. The whole car is original save a few naturally wearing parts, such as the brakes and water pump."
To see the barn-find 1968 Shelby, we drove from Mt. Airy, North Carolina, past Mayberry Creek (near where Andy Griffith was born), to southern Virginia.
Matt Belcher (left) got the lead from a friend, Joey Horton.
This statement reveals Bill Sisco's love for this Shelby: "I built the building it's in just to house the Shelby. That building cost more than the Shelby was worth at the time [1992]. I spent a lot of money to preserve that car. I could have just parked it out in the rain to rust away."
Bill parked his Shelby in this new building in 1992, and family items slowly engulfed the car over the years.
Cleared of debris, the Shelby was preserved fairly well during storage. We could find no rust in the body.
The Shelby plate was intact, revealing the Ford VIN followed by the Shelby number of "00388." This original Ford dealer was Koons Ford in Falls Church, Virginia.
The registration sticker on the windshield had an expiration date of March 1978. Bill said, "I didn't drive it after that."
Bill pulled the engine for a rebuild in the early 1990s.
Bill drilled new holes in the shock towers to lower the upper control arms, a trick Shelby did in 1965 that people have copied for over 50 years.
Matt let out a "woo-hoo-hoo" when he found the keys inside the car. The keys remained on the vintage Koons Ford keychain from 1968.
The driveway to the "barn" is obscured by trees and greenery.
We found the Shelby in the sticks, high up in the Blue Ridge Mountains outside of Floyd, Virginia.
The Shelby wheel covers that came with the car new were in the trunk.
Shelby American used the Cobra name on the 1968 G.T. 350 and G.T. 500 models after dropping the Cobra Roadster in 1967.
The original Shelby radiator needed core work.
Bill Sisco made a good point when he asked, "Why is everyone so hung up on the word 'barn'? I realize that this is not a barn in the sense that it once housed animals, but I did go to an agricultural building company to get it, and around here, most of the farm barns are steel. The days of the old wooden barn are long gone. I view the word barn in a much more liberal way."
Matt Belcher bought the Shelby.
Jonathan Large collects muscle cars, including a Mustang SCJ, and he told us about the Shelby.
Joey Horton found the Shelby.
From left to right: Matt Belcher, Bill Sisco, and Jonathan Large.
Bill bought these 10-spoke Shelby wheels for $750 but kept the old wheel covers.
Bill Sisco joined SAAC in 1977.
The original heads and block had been machined and were safely stored in another location.