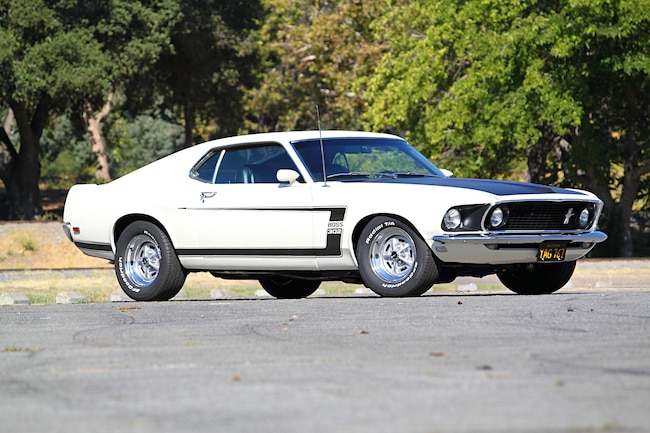 Picture this: You are standing next to your Mustang with your fellow Mustang buddies and a Bow Tie guy points to your non-functional scooped hood and asks, "How much added horsepower do you get from that?" This scenario probably played out numerous times in 1969 to owners of the flashy new Mach 1. Unless you got the R-code 428 or the rarely optioned shaker hood on your ride, you pretty much had to accept that, except for the turn signals mounted on the back, your Mach 1's scoop was strictly for looks.

When Semon E. "Bunkie" Knudsen joined Ford Motor Company on February 6, 1968, the design of the 1969 Mustang had been finalized. However, Knudsen was a staunch believer of "Win on Sunday, sell on Monday," so he aimed to rev up the company's profile on the track, and the first order of business was a non-Shelby Mustang for the SCCA Trans-Am series.

For this Trans-Am project Knudsen brought in General Motors styling wizard Larry Shinoda in May 1968. Called the SR2, Shinoda had his work cut out. Shinoda was thoroughly disgusted with the design of this Trans-Am entrant. It had chrome trim, big rocker moldings, rear body panel trim, fake exhaust outlets, and big scoops. Shinoda took that all off, especially the scoops—Shinoda hated fake hoodscoops like the one that adorned our buddy's Mach 1 at the beginning of the story. He even went so far as to eliminate the simulated brake-vent scoops on the quarter-panels found on all other '69 SportsRoofs.

Upon eliminating all the silly scoops and trim, Shinoda added functional front and rear spoilers that helped reduce the amount of air traveling under the car and planted the nose a bit. The rear deck spoiler helped fix the Mustang's light tail at high speeds. All function and no fluff. Oh, and about that "dumb name" (as Shinoda called it), well, the word "Boss" had taken on a connotation among the youth of America at that time as something undeniably good—something that was unquestionably at the top of what was available. What's more, Shinoda had always referred to Knudsen as "Boss," and there was nothing wrong with honoring the boss, so the Boss 302 was born.

Shinoda went on to add the attractive C-shaped side stripes with "Boss 302" lettering; blacked-out the headlamp buckets, taillamp panel, hood, and decklid; designed a set of wild black louvers on the rear window; and used 7-inch-wide Magnum 500 wheels. Just to make sure that no one could mistake it for anything more run-of-the-mill, the only available colors were eye-assaulting Bright Yellow, Calypso Coral, Acapulco Blue, and Wimbledon White.

While Shinoda made sure that everything put on a Boss 302 was functional, some of these options ended up being optional and not standard equipment. You of course got the 290hp Boss 302 V-8, manual transmission, and Boss graphics, yet only the front spoiler and argent Magnum 500 wheels were standard. The rear spoiler, sports slats, and chrome Magnum 500s had to be checked off on the order sheet. You would think that these items were standard on a Boss 302 if you go to any large Mustang show these days, as many have had the rear spoiler, sports slats, and chrome Magnums added either sometime in their past or during a restoration. But they weren't all built with these Shinoda-inspired items back in the day.

Tom Hasenberg's Wimbledon White '69 is one of those still-untouched, virgin-optioned Boss 302s. Through three owners, no one has succumbed to the temptation of adding a rear spoiler, sports slats, or chrome Magnum wheels to this plain, vanilla-wrapped, base Boss 302. Heck, since the restoration, Tom hasn't even added the standard front spoiler back onto it.

Tom picked up the Boss in November 2011 from the second owner, Harold Lamb of Reno, Nevada, who had only owned it for a year. Lamb decided to repaint it even though the original paint was fairly nice—the jambs and underside of the trunk lid are still the original paint. Though the car was in nice condition, the engine had issues and needed to be rebuilt, and the interior needed a little sprucing up.

The lack of the rear spoiler and sports slats really intrigued Tom when he decided to buy it, yet it's not a plain-Jane Boss. It has the Interior Decor Group, high-backed bucket seats, tachometer, fold-down rear seat, and 3.91 Traction-Lok rear axle. Also, Wimbledon White was the rarest color on a Boss in 1969, with just 194 sprayed in that color, and that helped seal the deal for Tom.

Once Tom got it home he proceeded to rebuild the engine, and from there he got a bit carried away and restored the engine compartment and front suspension. He even had the seats re-covered with the correct Comfortweave material. Other than that, he has resisted the temptation to do a full-scale restoration on the Boss, wanting to keep it as a driver. He has a '70 Grabber Green Boss 302 that he plans to do a concours restoration on.

Even so, this white Boss has done very well at Mustang shows at a local level with a couple of First Place awards at recent Vintage Mustang Owners Association shows and a class award at the 2015 Ponies & Snakes show hosted by the Bay Area Mustang Association. So, the next time you are at a Mustang show and see a row of Boss 302s all dressed to the hilt with spoilers and slats, think back to Tom's Boss on these pages. Sometimes less is more.

Trophy Stock Champion Bruce Winn’s 1993 Mustang Cobra
Ford Performance Launches Its Powerful Supercar: The Ford GT Mk II
Everything You Need to Know About NASCAR Ahead of the Daytona 500