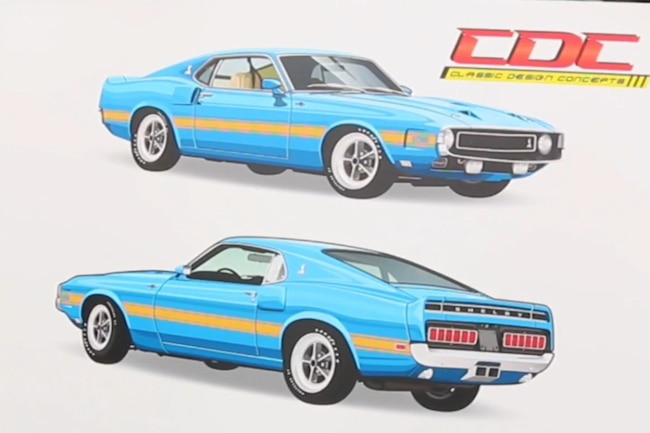 George Huisman of Classic Design Concepts (classicdesignconcepts.com) is no stranger to everything Mustang and Ford from full-on restorations, restomod builds, and much more in the early Mustang market, in addition to parts and complete concept cars for late-model Mustangs and F-Series trucks. He's always on the lookout for cool stuff, and recently found this 1969 Shelby G.T. 500 in original, low-mile (53,000), driver condition but a little on the rough side and in need of a near-complete restoration.

He went back and forth about restoring the car, but his real love is driving his cars so the plan became to "re-spec" the Shelby, effectively turning it into a restomod but without any hacking that would prevent it from going back to 100 percent original condition (so you can stop cringing Shelby loyalists). That means the car will get an aftermarket coil-over suspension, EFI on the original 428 Cobra Jet, and either a 5- or 6-speed trans to replace the original four-speed TopLoader. As he told us, leaving "everything you love about an old school muscle car and nothing you don't."

The car is currently completely blown apart undergoing the bodywork phase at Brown's Auto Body Services in Louisiana, MO, while the engine has been pulled and detailed and awaits the restore body to drop into. Everything is being photographed and filmed so you'll see a complete buildup in Mustang Monthly once the car is finished. The project has its own Facebook page if you want to follow the progress at https://www.facebook.com/groups/ReSpecYourElders/about/. The Instagram handle is @gt500respec

As George says, "Why restore a beautiful muscle car with 50-year-old technology? Respec'd to be driven!"