Over the Rainbow of Colors 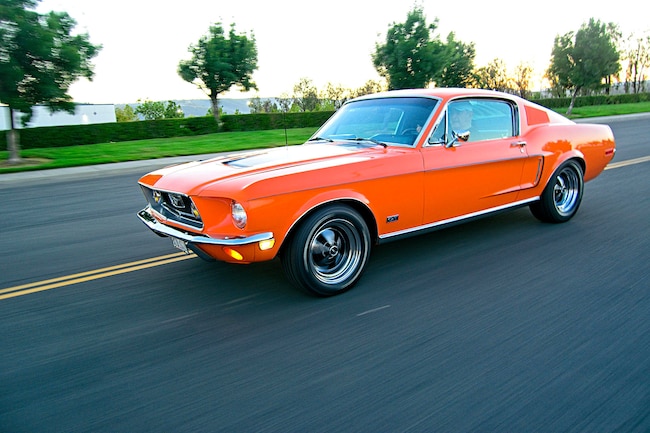 The marketing of special-edition Mustangs started within weeks of the car's debut, in April of 1964. Just a month later, the Mustang was the pace car for that year's Indianapolis 500, and replicas followed shortly after.

Over time, Ford's marketers have used every opportunity that they could think of to broaden the Mustang's appeal. Often this was accomplished with promotions targeted nationally, focusing on a specific set of options packaged together—the red, white, and blue Sprint editions in 1972 immediately come to mind—but many times it was regional editions that were the focus of Ford's efforts.

The Rainbow of Colors cars were something of a precursor for the even wilder colors that would be offered at the end of the 1960s and into the early 1970s by all four of Detroit's automakers, reflecting the influences of the era. For 1968, the Rainbow of Colors pallet included Flower Power Red, Whipped Cream, Spanish Gold, Dandelion Yellow, Hot Pink, Caribbean Coral, Forest Green, Sierra Blue, Moss Green, Poppy Green, Olive Green, Beatnik Blue, and Madagascar Orange, the color of the car featured here.

The 325hp four-barrel 390 V-8 option was the most powerful engine offered for the Mustang in 1968 other than the 428 Cobra Jet. The engine compartment is as tidy as can be with very few deviations from stock.

Because the cars of the Rainbow of Colors program were regional in nature, you will not see them shown in Mustang's national ads or in the dealership brochures for 1968. They were, however, heavily promoted by many local dealers in the region throughout the spring and summer of 1968. We wonder, did these cars complicate the production process in San Jose, and were the individual colors scheduled for production within a given time frame? Running Marti Reports on survivors might give us insight into answering this question. In-period advertisements at the time indicate that some dealers ordered 10 cars at a time out of a reported total production of 500 units.

Rainbow of Colors Mustangs were non-standard Mustangs, and all were built in Ford's San Jose, California, plant (actually located in Milpitas), which closed in 1983. It was redeveloped by Ford Land Development Corporation and mall developers Petrie Dierman Kughn. The redevelopment took more than 10 years, with the Great Mall of the Bay Area opening in 1994.

This background, at the Vista Paint store in Murrieta, California, is the perfect complement to the car's one-year-only Madagascar Orange paint.

According to research documented in the 2018 book, Mustang Special Editions by Jonathan and Jeffrey Klein (available from the publisher CarTech), the first known Rainbow of Colors Mustang, possibly a prototype or pilot build, was scheduled for production at the San Jose assembly plant on December 11, 1967. It appears that Ford Marketing apparently supplied the dealers in the region with a very comprehensive marketing kit. This kit included ad slicks for dealers and their advertising agencies to produce their own locally focused black-and-white newspaper ads. The first of these local dealer ads appeared on February 14, 1968, promoting a Mustang Rainbow sale at Underwood Ford-Mercury in Ukiah, California, a town of about 10,000 residents north of San Francisco.

The original trim tag is intact, showing 63B (Special Paint Orange) for the paint code, which indicates that this is a true Rainbow of Colors car, confirmed by the car's Marti Report.

But our feature car, according to its Marti Report, shows that it was ordered by another Los Angeles-area dealer, Jim Snow Ford in Paramount, California, on January 30, 1968—less than two months after the first known Rainbow of Colors Mustang was manufactured. It was built and released from the San Jose plant just eight days later on February 7, 1968. In writing about Mustangs and Mercury Cougars over the past 20 years and examining dozens of Marti Reports, this was a very compressed order, build, and ship time frame. It was apparently ordered as a dealer stock unit and was sold to its first owner on April 2, 1968. Extensive searching of newspaper databases does not show any ads for Jim Snow Ford similar to the Burns/Galpin advertisements.

What's really interesting is that reading between the lines of the Marti Report for this Madagascar Orange (Ford paint code #WT5063) fastback shows it was one of 589 Rainbow of Colors 1968 Mustangs, more than the generally acknowledged 500 cars. But the spot on this car's trim tag is blank with regard to its color.

The owners of this particular Rainbow of Colors Madagascar Orange 1968 Mustang GT fastback are Cecilia and Dave Lella of Southern California. Both, Dave especially, are dyed-in-the-wool car enthusiasts. A print broker who just can't fully retire, Dave's been a car guy going all the way back to 1950, with a variety of droolworthy machines from each of the Big Three. The couple's previous collector car was a trophy-winning 1956 Thunderbird, a Raven Black beauty with both tops that they owned for 30 years, but they moved on from it to make room for the Mustang. "This 1968 Mustang GT fastback is my newest car and my first Mustang. I purchased the Mustang from a very close friend who was an avid Mustang guy and restorer."

With the highly polished bumper, the chrome dual exhaust tips take on an artistic look in this photograph of the lower rear valance.

"More than a decade ago," continues Dave, "I found the car in a backyard in Lake Elsinore, in weeds 4 feet tall where it sat for some time. The owner was an incredible metal custom fabricator and a customer of mine, Dave Calhoun. I asked him, 'What's up with the Mustang in the weeds?' He said, 'Ah, that damn Mustang, my wife liked the color and wanted me to buy it and restore it.' At the time I had the T-bird and no way of getting a second car."

Dave Lella called his friend Jerry Kristensen in Temecula, California, and told him about the car. "When I saw the car the first time I didn't remember that orange color," says Dave. "[Jerry Kristensen] was not a fan of orange. I told him I did not see a paint code on the trim tag. After some research we learned the car was some sort of a special-order car. He did a complete restoration that took three years to complete. The car really was not driven a lot but was well cared for."

The trunk compartment is as perfect as the rest of the exterior, and the non-factory black taillight surround panel offers a contrast to all the orange and chrome.

Over the next eight years Jerry restored the car with both Dave and Cecilia following its progress. "My friend gave the car to his son, and for the last eight years it was not driven much," says Dave. "Then I sold the Thunderbird and all of a sudden there was space in the garage for it. I approached my friend to buy the Mustang. After some arm-twisting, I purchased the car under strict instructions from my wife that this was the car I had to buy. It's a real head-turner and blast to drive."

Since Dave purchased the car, he and Cecilia have been driving it and enjoying it immensely. Dave says, "My wife was very firm I buy this car. She knew the history of the car and trusted the restorer. The car was restored to factory specs with just a couple of accessories added: the C-stripe and black taillight panel."

The interior is nearly flawless, with the new-for-1968 padded steering wheel, bucket seats, and center console.

"I was unaware of the Rainbow of Colors for the 1968 Mustangs until another friend of mine saw the car and educated me on the color story. I ordered the basic Marti Report as soon as I bought the car (the Elite Report is on the way). I already know that just 42 were produced with this paint and trim package. It's a big-block 390, 325hp car backed up with the robust C6 Select Shift three-speed automatic transmission, with just 84,000 miles on the clock. And yes we both love the color."

Dave has several years of car shows under his belt and is the producer for the annual Murrieta Rod Run that attracts 400 cars, so he's well aware of the few tweaks needed to take it to a concours-winning level. But that's not why he bought the car; it's a driver in every sense of the word.

While taken for granted now, the overhead console with map lights was a part of the Interior Decor Group.

"I am still learning the ins and outs of the car. It's a blast to drive," says Dave. "I always got a lot of looks and praises for the Thunderbird, but this car captures much more attention and thumbs-up wherever we take it. The color makes it special and it really works on the fastback body style."

The 1967-1968 Mustangs show the maturity of the design, penned in Gale Halderman's studio, instantly recognizable as a Mustang but bigger in every dimension, and wide enough to allow for the installation of Ford's big-block V-8s. And the interior is a work of production car art. Our favorite feature on the inside? That very cool overhead console with twin map lights and switches, part of the Interior Decor Group that also includes bright grilles on each lower door panel with courtesy lights. It gives the cockpit a very upscale look with its black luxury vinyl bucket seats.

The lights built into each front door panel mark this Mustang as being very well equipped, also part of the Interior Decor Group.

One thing that impressed us was the sheer photogenic appeal of this car, especially in its fastback form. From every angle, but especially from the rear and from above, this is a timeless design—one that has aged extremely well over the past five decades. Hard to argue with that assessment. Agreed?

Underwood Ford-Mercury in Ukiah, California, north of San Francisco, was apparently the first dealer to run a Rainbow of Colors advertisement.
Galpin Ford, still in operation today, was one of the California dealers that aggressively marketed the Rainbow of Colors program.
Besides Galpin Ford in the San Fernando Valley, north of Los Angeles, Mel Burns Ford in Long Beach was another of Ford's California dealers to take advantage of the Rainbow of Colors promotional opportunity.
Since its introduction, there have been more than 500 special-edition Mustangs, most chronicled in the book Mustang Special Editions, written by Jonathan and Jeffrey Klein.