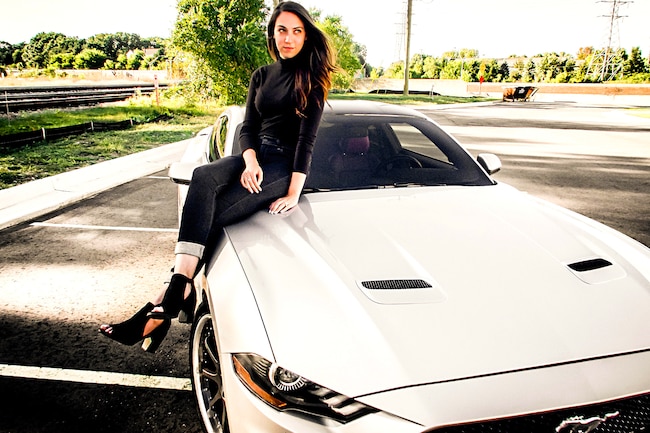 This week's Mustang Girl Monday has it all; love, marriage, Mustangs and drag racing—no, Kate Hudson did not sign on for the next Fast and the Furious movie but JoAnna Iacobelli's Mustang story is just as good.

"When I tell people, I bleed blue I always get a confused look, but Ford and Mustangs have played a major role in my life. So much so that without them, I wouldn't be here. My parents met cruising in their Mustangs. My mom asked my dad an intricate question about his and it was love ever since. They went on to open a Mustang performance shop (Alternative Auto Performance in Chesterfield, MI) and then had me. Running around the shop, going to the drag strip, and the countless Mustang drawings I did, to show my dad, fill my childhood memories. My parents let me drive their 2005 Mustang GT when I first got my permit and the love only got stronger once I was able to get behind the wheel.

Fast forward to when I was 18 and my dad picked up a 2011 5.0. He let me take it sometimes on the weekends and then the day I had been waiting 18 years for finally happened—I took it down the drag strip! I never thought I would love something so much. I saved and then bought my very own Mustang, a 2007 GT. I slowly learned everything I could about the car and went to the track every weekend and to every car show possible. Then my world changed in 2014; I attended a car show and met the love of my life. Bryan (now husband) has a 1994 GT. We of coursed had to race on our way out of the meet and four years later we will both tell you we won. Eventually we sold my first car and went on to getting a 2018 Mustang and my first brand new car, I even framed the window sticker. As fate would have it, after I bought my '18 I realized my mom actually bought her first 5.0 exactly 30 years before me. We absolutely didn't plan that at all and she still has that car, but her window sticker looks a whole lot different! The Mustang has played a major role in my life, I don't know how I can thank them enough!"

Maximum Motorsports’ Series of Tips, Tricks, and Tutorials is Designed to Improve Your Mustang’s Fun-Factor
Ford Performance Racing School Brings Hi-Po Driver Training To Both Sides Of The Country
10 Must-Watch Storylines in NASCAR This Year