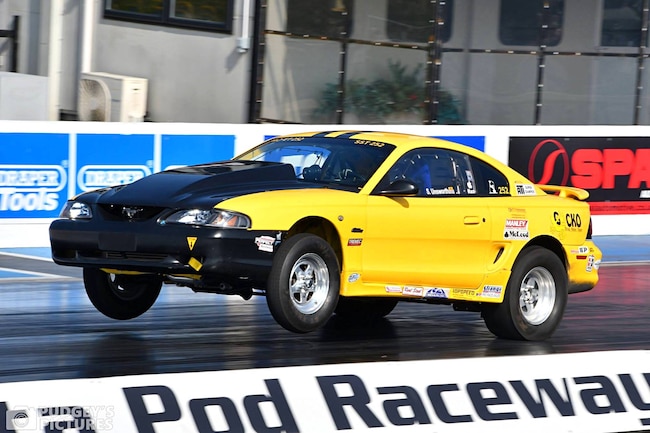 This week's Mustang Girl Monday will give you a run for your money! Sarah Unsworth may have earned the title of the UK's fastest mod-motored Mustang at Santa Pod Raceway in her 1998 SN95.

Sarah stumbled into racing, quite literally, and hasn't looked back since. She tells us, "I started drag racing after one drunken night following my husband's successful weekend racing and stupidly suggested I could race too. My first year as part of our team was 2011 and I won a first-place trophy, scored several top three qualifying positions, and came in third overall. It hasn't been easy sailing as I appear to have a heavy right foot and very little mechanical sympathy. I've always been told to drive it like I stole it."

She continued, "The SN95 has a 4.6L V8 engine pushing out around 600hp with a manual gearbox—a Tremec TKO Liberty face-plated box—and was completely built by my husband who's a guru on building an SN95 to race here in the UK. A baby V1 supercharger increased our horsepower which resulted in a number one qualifier in the Sportsman class dialing a 12.00 and running a 12.001. Unfortunately, the weather was against us and the event was called. Later that season, an improvement on the tune resulted in us hitting Pro-E.T. and Super Street territory. My husband ran in Pro-ET (11.99-9.00) and I went for Super Street (10.90), and a couple of breakages and more tuning, in 2017 I ran two 10.90s and again obtained the number 1 qualifier spot but like before, the weather put a halt to our eliminations."

"Fast forward to 2019 and our first event my husband had comfortably run 10.64 in 2017 repeatedly so I had a challenge to drop that low into the 10s to stop the husband/wife rivalry. A test and tune event proved that the modifications made by my mechanic/husband on the new FAST system were successful and touching the 10s was easy, but the track was too cold to get quicker than a 10.4. It wasn't for a lack of wanting to try, but after three squirrelly runs we had to call it a day. Then with some more fine tuning of the FAST system and changes to the suspension settings, to our surprise we ran a 9.94. As far as we're aware this is the fastest modular-motored Mustang in the UK and that title is now held by me!"

My husband and I have discussed it and I'm going to run the whole season with an aim to enter Super Gas once a new 'cage is fitted as our current 'cage is only tagged to 10.00. This will most likely be over the winter. For now, we're going to slow it down to 10.00 and have some fun. We're already putting the cat amongst the pigeons being stick shift and being consistent! I need to get a handle on the two-step and brave the power shifting to gain an extra tenth. It's a steep learning curve and I have a lot to live up to against my husband and his experience, but it's the rivalry that we thrive on, so watch this space on Instagram—geckodragraceteam—there's a mid-9 run coming on this motor!"

Carinsurance.com’s Latest Survey on Speeding and the Excuses Given for Driving Too Fast
2006 Mustang GT: Mid-10’s With A Three-Valve Pony!
10 Must-Watch Storylines in NASCAR This Year