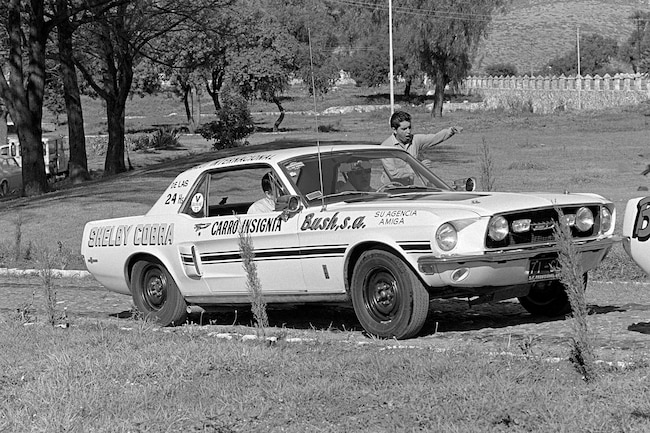 The Mustang was the official car of the 1968 Mexican Rally International De Las 24 Horas (International 24-Hour Rally) traversing Mexico City's surrounding area. Petersen's Sports Car Graphic magazine covered the rally from a made-in-Mexico Mustang driven by the Rallymaster, Franco Soldati. Mustangs from Mexico and the U.S. were entered, including a G.T. 350 from the team of Attila (now that's a name) Fenyes and Steven Jamison. The Mustang in this Jean Calvin photo has a number of Shelby items—sidescoop, spoiler, taillights, and side-exit exhaust—but the steelies are probably mounted for durability's sake. One James Bond-like feature: the projector-beam sideview mirrors, which aided visibility during the night-driving sessions. Driving was already taxing, even before the sky dumped a ton of agua on the off-road sections of the course, forcing many to time out, get stuck, or break. When the sunshine returned, only 13 had made it to the finish line. From the wide array of manufacturers entered—Renault, Dodge, Chevrolet, Lotus, Mini, VW, and others—a stock Mexican Ford Mustang, driven by the team of Carlos Pruneda and Juan A. Ibarra, took the win.