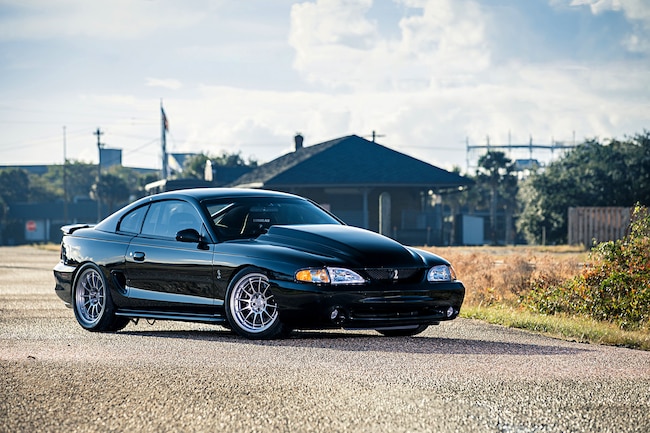 Not all projects are going to be successful. The sheer fact of the matter is not everyone has the knowledge and skills to tackle the scope of what most project cars actually entail. For many, it's the small victories and significant steps along the way. There are infinite levels of success, as not every project is the same, but taking on an all-encompassing build and truly nailing every aspect of it is extremely difficult. In many cases, people make sacrifices and find things they are willing to live with (or without) just to call a car "done." Nicholas Rolocut is not one of those guys, and this is not one of those projects.

When you open the hood, you're greeted by one of the most popular and versatile engines to every be produced, the Coyote. This particular Coyote has been upgraded with a Cobra Jet intake manifold and throttle-body and a Rev Auto 5-inch cold-air intake. The engine also has CNC-ported cylinder heads, quartet of Comp Cams camshafts, and an upgraded set of oil pump gears.

Suffield, Connecticut's Nicholas Rolocut is a professional auto detailer by trade, but this 28 year old has proven his worth as a custom car builder. He nailed every aspect of this slick 1996 Cobra and flawlessly turned his vision into reality. Oh, we forgot to mention, he built the car in only four months!

"I built this car to do everything well," Nicholas explains. "After having an unreliable pushrod car for five years, it was time for an all-around unique SN95. With the Maximum Motorsports coilovers with matching Maximum spec'd Bilstein shocks and struts, the car does not rub or bottom out, it rides very smooth, and isn't bumpy for being slammed. And it goes around corners like a BMW!"

Black is an extremely unforgiving color. Nicholas Rolocut's 1996 Cobra is a perfect example of what a black car should look like. The paint is so deep it looks like you can dive into it.

Nicholas' SN95 is loaded with slick custom touches. When you open the hood, your eyeballs are met by a Coyote engine, which was plucked from a 2015 Mustang GT. The factory intake manifold was ditched for ported Cobra Jet unit with a Cobra Jet monoblade throttle-body. The induction system is completed with a Rev Auto 5-inch cold-air intake and a massive air filter. Though these are the things that quickly grab your attention, when you look a little deeper, you truly begin to see the level of workmanship and the amount of time invested in the project. The entire engine bay is smoothed. The firewall and inner fenders are free of holes, perfectly straight, and coated with paint that looks like you can dive into it. This alone is something many people try to accomplish and few achieve this result. Beyond the firewall and inner fenders, nearly every bit of wiring and plumbing is either hidden or made custom to make the engine bay as clean as possible.

"Some neat things about this car is that the engine bay and firewall are smoothed," Nicholas explains. "All the Hydroboost power steering lines, brake lines, fuel lines, coolant lines, and A/C lines are custom made so that everything can be hidden. This makes the engine bay look very clean."

The interior is clean and simple. Corbeau seats off a splash of color to the pristine black interior. The color is also used for the shifter and E-brake handle boots, which ties it all together nicely. A rather rare FR500 steering wheels adds another subtle custom touch to the driver's compartment.

The little details that make this car stand out in the heard are seemingly limitless. When you start noticing the little touches, it's easy to overlook the larger components that are equally awesome. This Coyote engine has received massive improvements as part of the build. Before Nicholas turns the key, you might not assume the engine is far from stock. In fact, the cylinder heads were removed and replaced with a set of CNC-ported Boss 302 castings. The stock camshafts have also given way to a set of Comp Cams Stage 3 NA camshafts. If you've never heard a set of these camshafts in action, we highly recommend it! The sound is equally as impressive as the increase in performance.

The engine is mated to what many consider to be the baddest manual transmission you can have in a street car—Tremec's T56 Magnum. These awesome six-speed gearboxes are based off of the TR6060 internals found in the GT500s. The combination of short, accurate shifts and the ability to shift at high RPM makes them an amazing transmission for any Coyote swap. Power is applied to the transmission through a stout McLeod RXT twin-disc clutch. This clutch offers an amazing blend of comfortable pedal feel and tremendous holding power for the track or street.

The aggressive look of this beautiful SN95 is accented by an awesome set of Enkei wheels and select body upgrades like the 3.5-inch HO Fibertrends cowl induction hood and Boss Shinoda wing.

Speaking of getting power to the street, a slew of Team Z rear suspension components help plant the Toyo tires that wrap the Enkei wheels. Stopping is no problem thanks to a set of 14-inch Wilwood 6-piston brakes. And every aspect of the car is tied together with all-important exhaust note. A custom 3-inch X-style mid-pipe directs exhaust flow past the rear bumper, and a set of Borla XR-1 mufflers give this Coyote a super aggressive howl.

"The car hooks very well with the Team Z lower control arm relocation brackets," Nicholas explains. He continues about the finer points of how the car drives, "With the cammed Coyote, 4.56 gears, and the 2.97 gear set Magnum transmission, the car gets around 24-26 mpg and cruises at 2,200 rpm at 80 mph thanks to the 0.50 sixth gear. The car revs to 8,300 on a consistent basis and is an absolute blast to drive because it hooks, turns, and stops, while being a very attractive car. I daily drive this car as much as I can. The A/C is ice cold, the heat is hot, it gets great fuel economy, and the car sounds amazing. It has no drone, unlike most Coyotes, thanks to the mid-mounted mufflers instead of the rear-mounted mufflers on the S197 platform."

"The other very unique thing is, I planned, bought, and built the whole car. I have driven it 7,000 miles per year on average since I built it in 2015. It has made the trip to Mustang Week and back from Massachusetts twice. All the bugs of a full custom build are ironed out. There are not many cars or people with the desire or skills to take a custom car and drive the wheels off of it, then fix the issues until it is as reliable as a stock one."

Nicholas' Coyote SN95 is a perfect example of what's capable when you plan a project out in detail; stay true to your vision, and settle for nothing less than perfection. 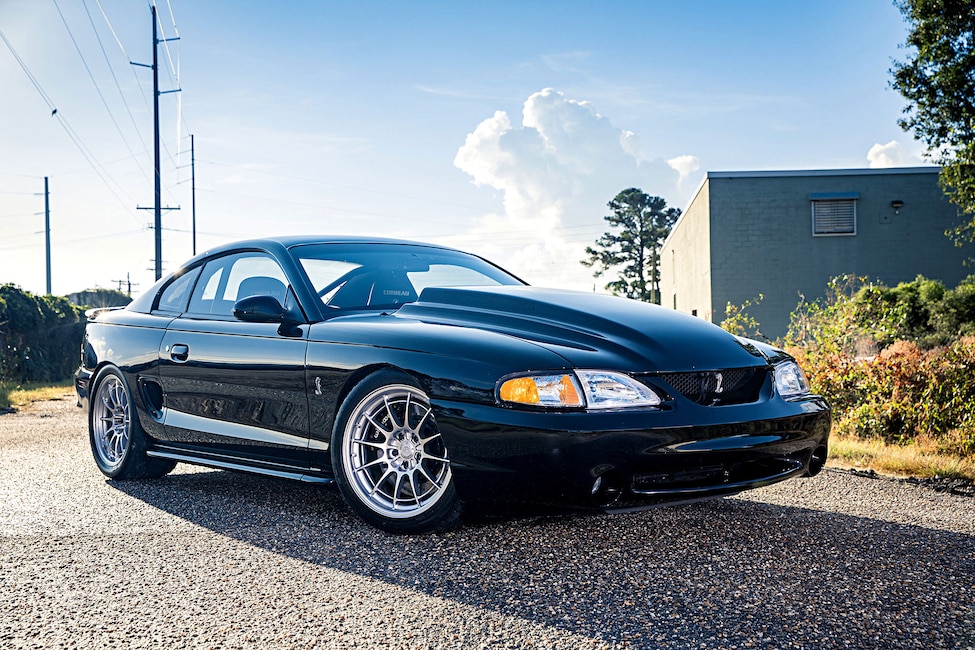 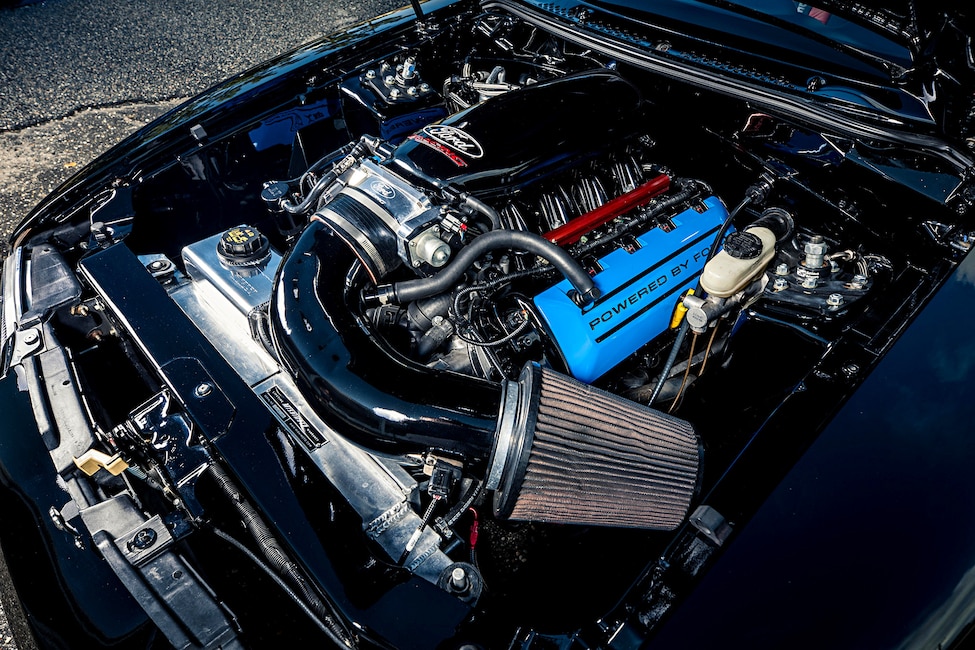 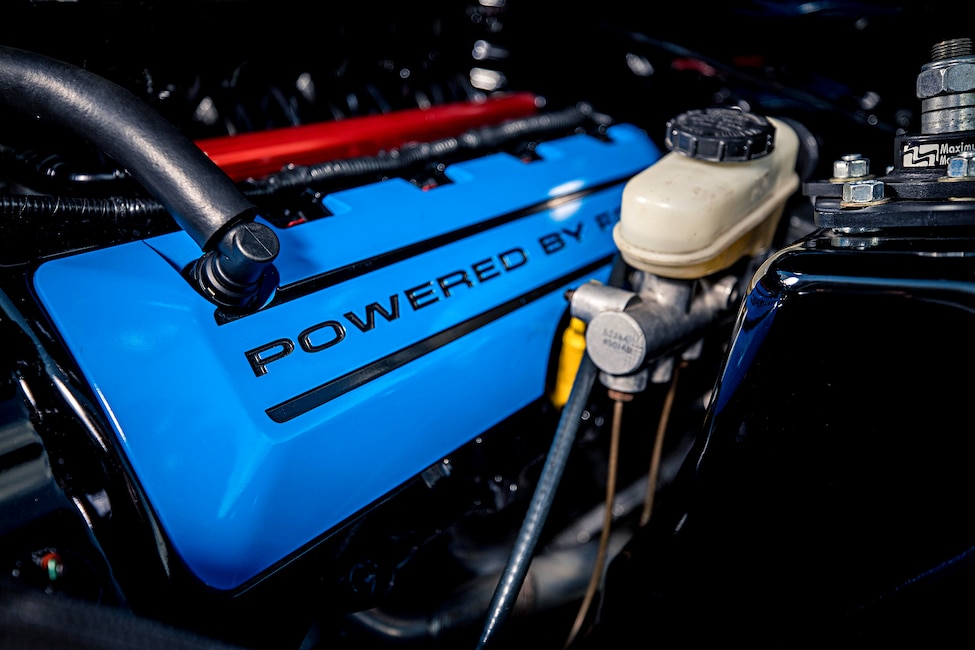 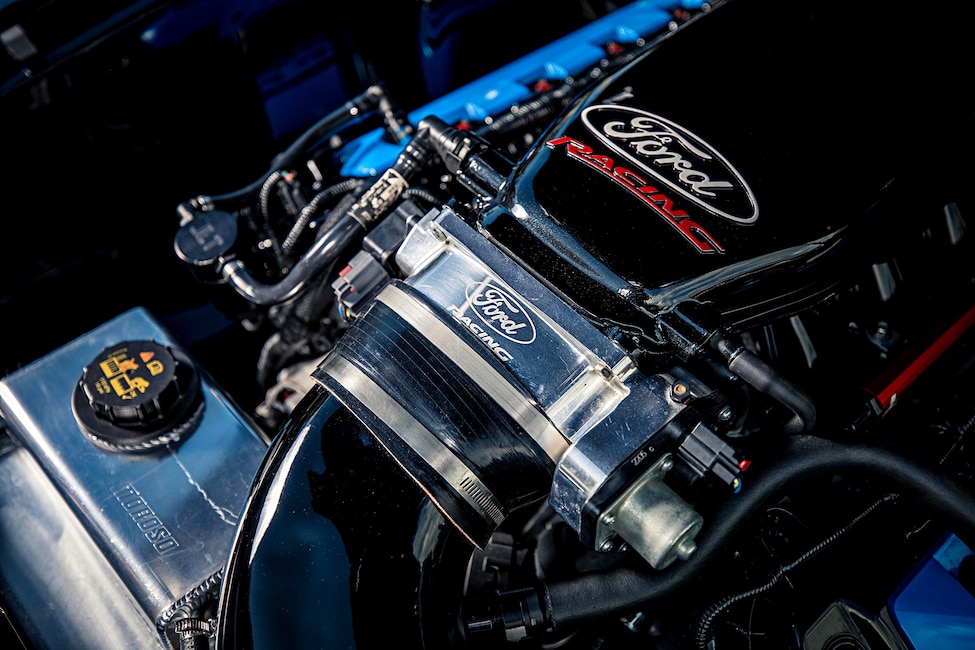 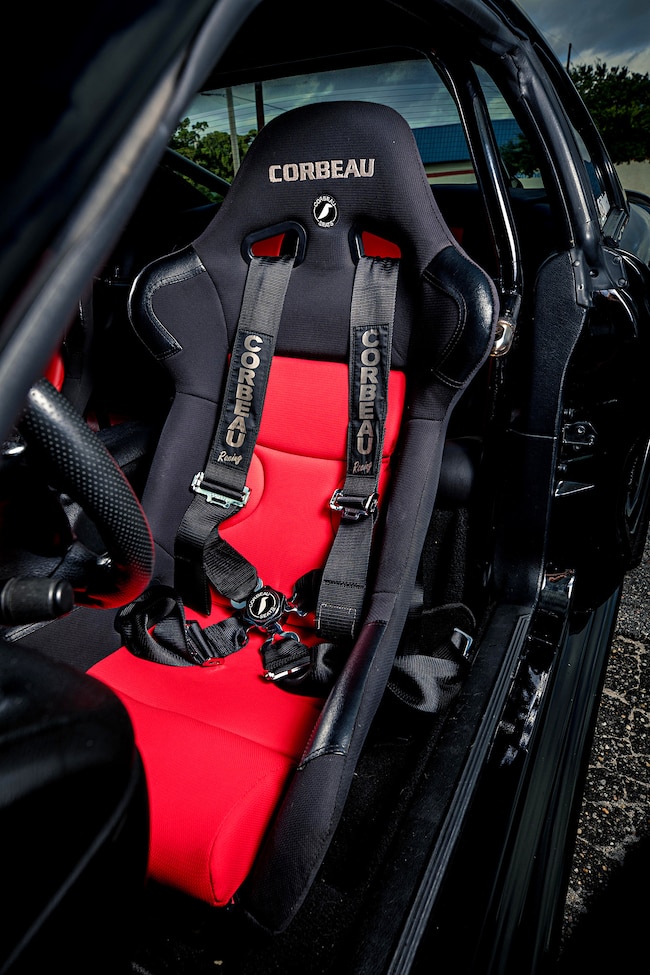 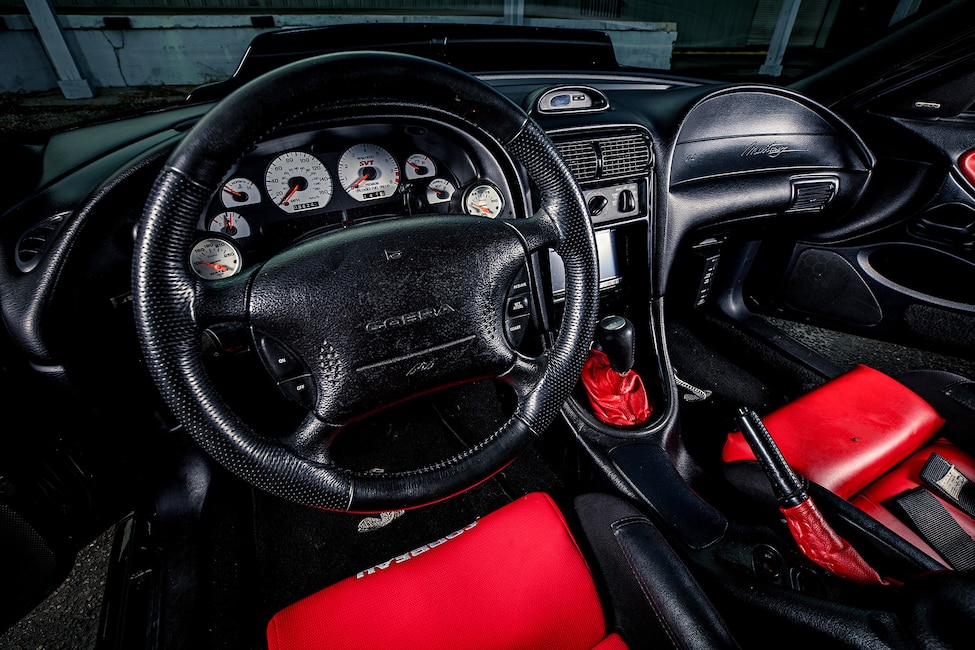 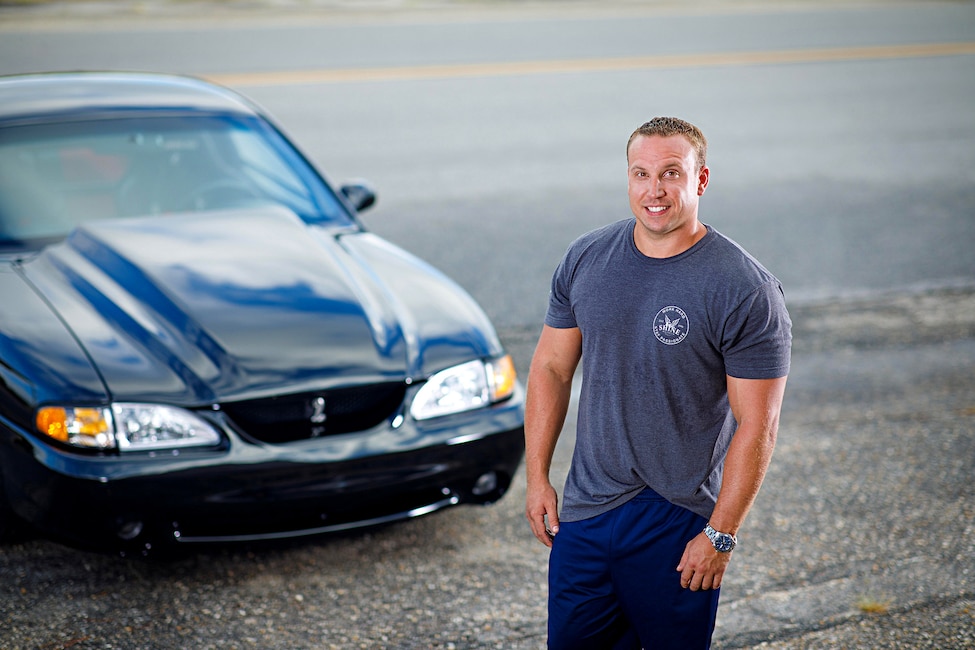