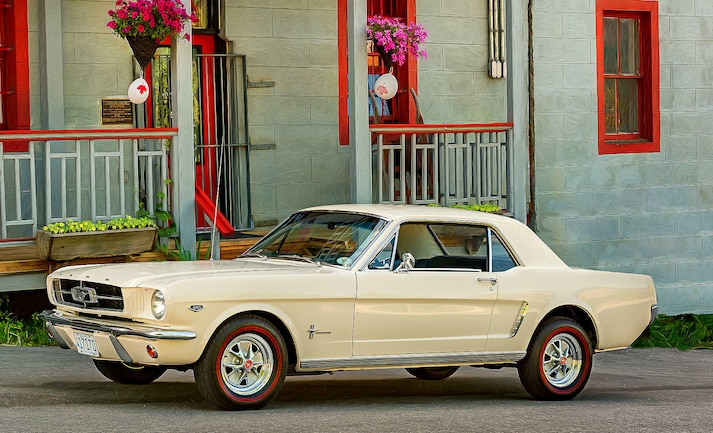 Along the banks of Canada's Kootenay River, about two hours north of Spokane, Washington, is about the last place you would expect to find one of Ford's earliest and most sought-after classic Mustangs. For Barry Farynuk of British Columbia, Canada, it all started with a conversation.

"It began for me a few years ago when I was talking with a colleague about cars over lunch," Barry begins. "In passing he mentioned that he and his wife owned two Mustangs. Hers an original black '66 289 2V car, and his a white '65 all-original K-code notchback. I said, 'Pardon?'" recalls Farynuk, who then gave his undivided attention. There, over lunch, the amazing story unraveled about how one of the first 1964 Mustang K-codes found its way north of the border.

Built in August of '64 and delivered on order to Vancouver, British Columbia, Canada, this Wimbledon White four-speed Pony saw limited road duty under the command of its original owner. With barely a few Canadian seasons under its floorboards, the car was sold to its second owner, who wasted little time putting it through its intended paces.

"We drove it hard, street racing just about everything around," relays Farynuk's coworker, until at some point during his tenure they managed to destroy one of the heads. Barry says, "I told him jokingly, 'Well, if you ever want to sell it, let me know. '" As luck would have it, Barry wouldn't have to wait long. "About six months later I was presented with an offer to buy the K-code," but there was a catch. Barry would have to buy both the Hi-Po and the '66 belonging to the owner's wife. Jumping at the opportunity, a deal was reached for the pair, and the coveted K-code had found its next owner. Farynuk explains, "When I bought the car in 2015 it had been sitting since 1980, so as you can imagine it needed everything."

Upon taking possession, Barry would discover from the original owner's manual that stretches of hard acceleration claimed the original Hi-Po with just over 71,000 miles on the clock. Not quite ready to put this thoroughbred out to pasture just yet, the owner swapped out the now-damaged powerplant with a 289 from a '68 Comet, relegating the Mustang to daily driver duties.

"Fortunately," said Barry, "all of the original parts came with the car, including a replacement Hi-Po 289, complete with heads, crank, rods, pistons, etc." The entire drivetrain was also intact, complete with VIN-stamped Top Loader four-speed trans and 3.89 open rear.

With his sights set on restoring his rare Pony, Barry quickly sold the packaged '66, the additional parts, and replacement 289 from the Comet and began a full restoration, including straightening battle-tested sheetmetal and successfully rebuilding the original engine back to Hi-Po specs before dropping it back into the car in June of 2016.

Perhaps in a nod to nostalgia, upon completion of the potent K-code, Barry made his way to the former stable that his Wimbledon White Mustang called home for nearly 40 years and handed its former owner the reins. "He got a little choked up seeing his old car," Barry says, "and upon tossing him the keys and inviting him to stretch its legs, became quite emotional. We went for a long ride in the car with him noting how much power it had." For former and current owner, it was a special moment.

Far removed from its youthful exuberance of terrorizing the Great White North, Barry and wife, Shellie, enjoy showing off the handiwork of local restorer Ken Sherbinin and taking their car for occasional drives and to local shows.

"I haven't really pushed it too much just yet," Barry says with a knowing tone, "but it's got plenty of giddyup, and there's nothing else like that Arvinode dual exhaust," which surely turns its share of unprepared heads.

With less than one percent of those early pony cars claiming the coveted K-code engine, combined with its Canadian order originally slated for north of the border, the Farynuk's Mustang is one rare horse. Today, this gorgeous example again roams the hills and valleys of the land of the maple leaf. O Canada indeed!