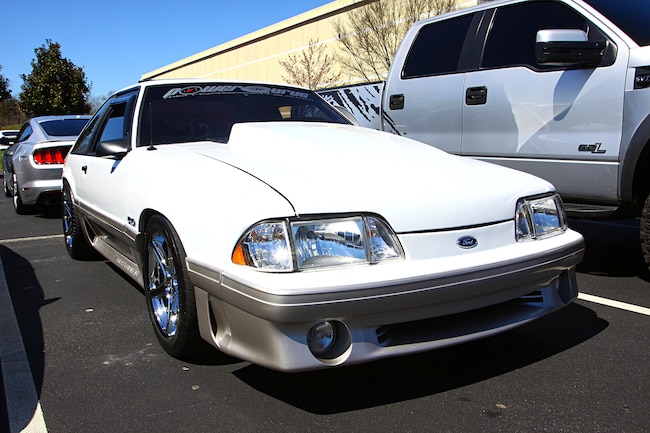 Not many of us can say we rode in our Mustang when we were a child, but Will Cooper can. He rode in this 1989 Mustang GT in a child seat when his dad, Tim, initially built the car for Will's mom, Teal Hatfield. The car was the family daily until 1997, but then it was parked until 2011 when Will decided that not only did he want to ride in the car again, but he wanted to drive it as his own car, too. When Will first rescued the car it was mostly original. These days the car has a built 302 by Will, Tim, and a couple friends. For additional horses, Will added a Vortech Si-trim supercharger, an Anderson Ford Motorsport Power Pipe, and other supporting hardware, along with a custom tune from Powercurve Motorsports using an SCT chip. The AOD was tossed in favor of a T5 transmission with a McLeod clutch and an MGW shifter. Precision Autosports performed the paint work on the car to get it looking brand new. Will's friend Jon Johnson helped with much of the build, including the car's suspension and five-lug swap.

Photography by Will Cooper

Pacin’ The Race in a Mustang
Turnkey Mustangs: Behind the Door at Revology
10 Must-Watch Storylines in NASCAR This Year