Pacin’ The Race in a Mustang 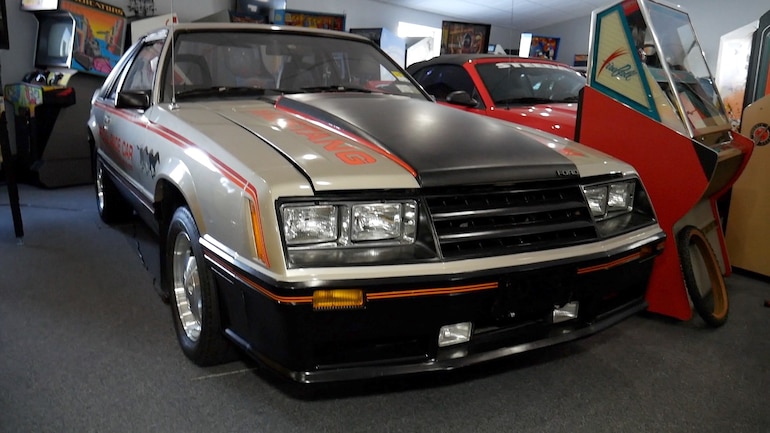 Aaron Schmitt's collection of cars isn't in the typical garage, rather in a building that could double as a video arcade teleported straight out of the late 1970's. But you won't need a roll of quarters to eye up Schmitt's other vintage game piece, his 1979 Ford Mustang Pace Car clone.

The Mustang was first chosen as the Official Pace Car of the Indianapolis 500 Race in 1964 and then again for the '79 race (Jackie Stewart famously drove the real pace car at the start of the race). Ford decided to commemorate this Memorial Day Weekend tradition by producing just a tick over 10,000 of these special edition Indy 500 Pace Cars for public consumption. Power came in the form of a 2.3-liter four-cylinder turbo backed with a mandatory four-speed manual transmission or the 5.0LV-8. The classic Ford 302ci bullet could deliver its power through either an overdrive 4-speed manual or a three-speed automatic transmission. The loud red and orange exterior markings were unique and contrasted sharply on top of a two-tone black and Pewter Polly paint scheme. Black and white Recaro seats were nestled into a black interior and the body lines included a front end with a fog light-sporting unique air dam. Above was a full-length cowl type hood scoop feeding air into the engine bay and air was fed into the drivers compartment courtesy of a sunroof.

The Mustang was totally redesigned in 1979 (called the Fox platform) and represented the next evolution of the car, in a far better package than the previous five years of Mustang IIs, so it was appropriate that the car was chosen as the official pace car of the Greatest Spectacle in Racing.

The Mustang With Nine Lives
1971 Boss 351 That Was Sold, Then Found Again
10 Must-Watch Storylines in NASCAR This Year