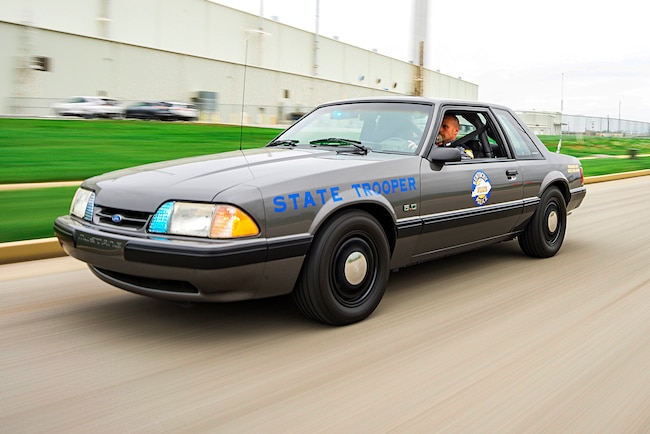 A 1990 State Police Mustang frequently drove past a Texaco station in Smith's Grove, Kentucky. The trooper behind the wheel would often wave to the teen boy working at his family's service station. The boy loved cars, and the Mustang struck a chord. It's not uncommon for gearheads to be smitten with cars in their teens, but for Jonathan McChesney, the combination of car and its assignment set him on his life's path to his dream career and the car that ignited that drive.

"I had the desire to be a Kentucky Trooper since I was about 14 years old. Another Trooper from my area was assigned to the Mustang at the Bowing Green Post 3. He would pass by dad's Texaco station and wave at me. I thought that had to be the coolest job ever," Jonathan recalled. "Later in my career I had the opportunity to drive the B4C KSP 2001 Camaro. I was living the dream. Unfortunately, KSP never ordered anymore Mustangs, but the Camaro was a blast to drive."

Obviously Jonathan loves cars of all kinds, but the 1979-1993 Mustangs hold a special rank in his automotive squad. It would be a while before he owned one of his own, however.

"I have always had a passion for the Fox Mustang since it was what I grew up with during middle school and high school. I will never forget my cousin had purchased a 1988 GT 5.0 which he drove to high school. One morning while I was riding the school bus, he passed us with his Mustang. I still remember the distinctive sound the roller motor made as he went by. I had a 1969 Camaro in high school while all the other guys had 5.0 Mustangs," Jonathan said.

One of those guys attended his high school and eventually became a well-known Mustang racer. Joel Greathouse owned a rare, white Shotgun customs coupe that he only drove to school on Fridays. Eventually Joel added a supercharger to the car, and that made an impression on Jonathan, whose cousin, Justin McChesney, tunes and races with Joel to this day.

"Since I grew up in Bowling Green, Kentucky, with Beech Bend 20 miles from my house, I quickly fell in love with the Buick Grand Nationals when they would come to town for the Buick Nationals. I sold the Camaro I had bought at age 14, and bought a Grand National at age 17," Jonathan explained. "I finally got my first Fox Mustang in 1995 to drive to college. I've owned at least nine Foxes since then. One was a Saleen, and two were 1993 Cobras. This is the first SSP I've owned. I currently have a 1991 Black on Black 5.0 notchback with 90,000 miles. It has the original smog pump, air box, and factory tape deck. It's a really nice example of the 5.0 notch."

Along with all of its period-correct law enforcement gear, Jonathan's Fox is solidified by a custom six-point roll cage.

The path to that first Special Service Package-spec Fox was a long one, but eventually he purchased a Mustang that had been taken out of service the same year that he achieved his other dream — becoming a Kentucky State Police officer. He also owns the B4C-spec Camaro that he once drove on patrol, but the 106,000-mile Mustang is obviously one that started it all.

"The dream became reality on February 14, 1999, when I was accepted into the State Police Academy. Then in 2005 through some strange turn of events I met a man who owned one of only four 1990 KSP Mustangs," Jonathan said. "In early 2006 I was able to reach a deal with him to purchase his Mustang sight-unseen. My wife, Lana, and I picked the car up on January 24, 2006, and have owned it ever since."

"I certainly think the Fox could still hold its own this day and time especially with a few mods," Jonathan said of its viability as a pursuit vehicle in the modern era. "These were amazingly reliable cars that were easy to work on. I have had friends who regularly sprayed 100- to 150-horsepower shots of nitrous on 100,000-mile 5.0s weekend after weekend. They just seem to go faster each week."

Once he found the car, Jonathan wouldn't be denied in adding it to his stable of high-performance machines. However, he didn't know just how rare the car was given the popularity of the prior model years as SSP vehicles.

" I purchased the car sight unseen. I knew these cars were rare, but at the time I thought each of the 16 KSP Post had one. I later learned there was only four KSP 1990 Mustangs purchased. We had 10-12 1985 Models, but there were only four 1990s," Jonathan explained. "I verified this after I purchased the car. One of the cars is still owned by the KSP for a parade/state fair exhibit-type car. The last one in service, which was the consecutive VIN to mine sold at a surplus auction a couple of years ago. I went to the auction in hopes of buying it, but it brought more than I could afford at the time. The last one has been painted white, and has rusted down."

Jonathan has two sets of wheels that he runs on his SSP Fox; the original bare aluminum 10-hole wheels and a set a black painted version for undercover operations.

So you can see why owning the 1990 version, the same model that had set him on his path to Fox fandom and law enforcement, was such a special opportunity.

"Needless to say when I made the deal with the previous owner I was very persistent to get the car ASAP because I was afraid he would change his mind. I picked it up a couple of days later after making the deal. It was a very pleasant surprise at the condition it was in," Jonathan gushed. "The only visible flaw was a tear in the driver-side seat. I was so proud to merge onto Interstate 65 and drive it home. This really was a dream come true. I could not wait to get it back home and start putting it back to service condition.

Assigned to Dry Ridge Post in Northern Kentucky, this one went to auction in March of 2000 with 104,000 miles on the clock, but Jonathan wasn't the original buyer. First it was sold to another lawman whose affinity for the car led him to salvage the car's significant history from the landfill.

"The buyer of the car at the auction was the captain who was over the State Police Supply section who was also a car and Mustang enthusiast. After buying the car he began to look for the automotive file on it, which contains the complete fleet records from the original order, title, issuing paperwork and the monthly automotive history for the complete time it was in service," Jonathan explained. "After he was unable to locate it, he asked one of the secretaries to help him find it. She told him they had already been thrown away. Luckily the trash had not run yet. The two of them went dumpster diving and located the yellow folder containing the complete history of the car."

For someone who grew up loving these cars, having that history along with the car makes it all the more special to own this SSP Fox.

"I think it's just so cool to look back and see the first tank of gas which was put in the car at 103 miles," Jonathan said of the service history. "And then every tank of gas, oil change, and tire replacement while it was in service. I have everything that would have come with the car new from the dealer."

Soon after he purchased the car, he temporarily donated it for display for at a worthy institution before going about some minor restoration work to bring the car up to its pristine but period-correct status.

"After I purchased the car, I loaned it to the Kentucky State Police Museum in Frankfort Kentucky where it was on display for a year. Now I take it to local shows where it is always a crowd favorite," Jonathan said. "Since owning the car, I have had the interior reupholstered, replaced the wheels and tires, added all original KSP markings, as well as installing the correct-era service equipment including radar and Visual Average Speed Computer And Recorder."

Now it looks just like it did when it was patrolling the highways of the Bluegrass State. Now it pulls duty as an occasional driver or show star when Jonathan can find time in his family's busy schedule. When he does take the car out, it always causes a stir.

"You literally can't drive it anywhere without tons of looks, questions, and photo requests," Jonathan said. "The rear quarter panel has a decal that says, 'Purchased with seized drug money.' I have had several folks at car shows say they helped the state pay for it over the years when they were running wild."

Of course, given its rarity and history, Jonathan doesn't plan to run wild modifying his SSP Fox. It is perfect just the way it is and, undoubtedly, takes him back to that time at the service station every time he takes it for a spin.

"I just plan to keep driving it, showing it, and enjoying it as much as possible. I pretty much have it set up the way I want it. It has the era-correct equipment in it," he added. "The car has had one repaint, and I have had all the seats recovered, new map pockets, new tires, etc. I have two sets of wheels I run on it. The original, aluminum 10-hole dial wheels, and the set of black painted wheels. Both sets look great on it."

It's looks are arresting to say the least, and it's great to see that it will still be out there on patrol with an officer who appreciates its rank in the Fox order. 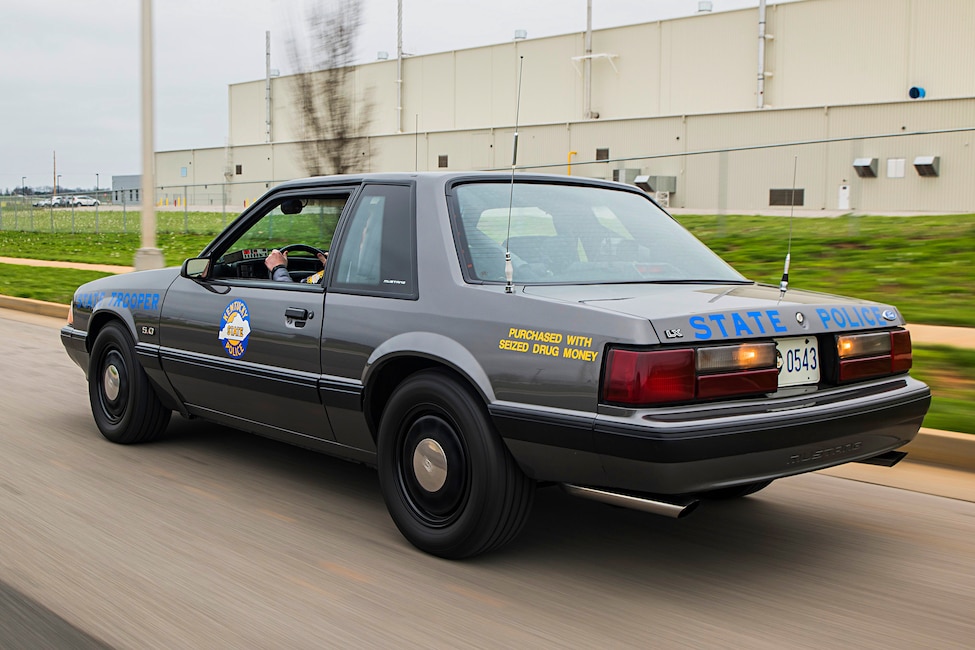 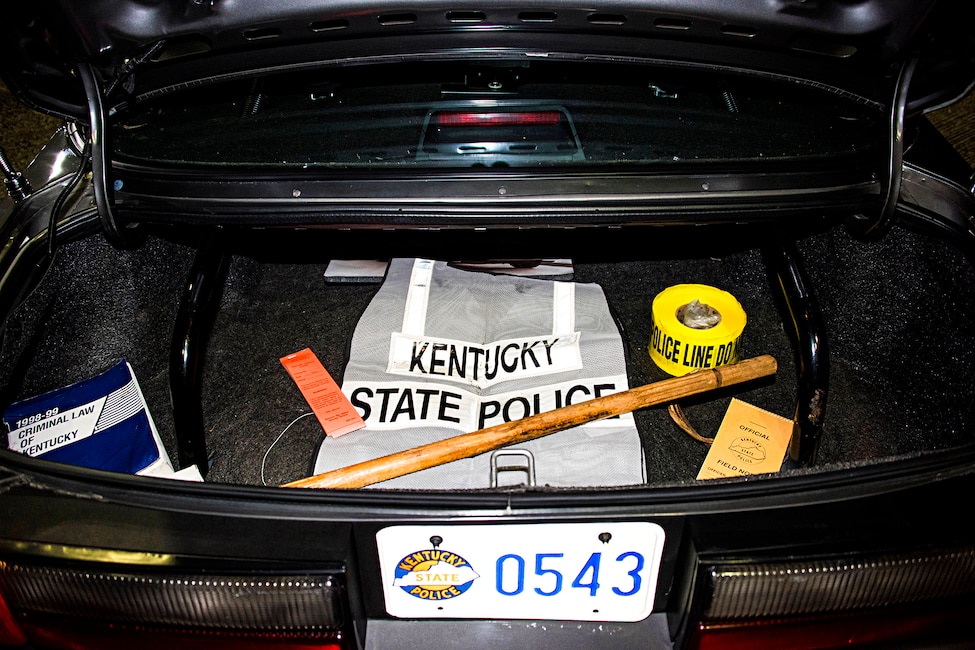 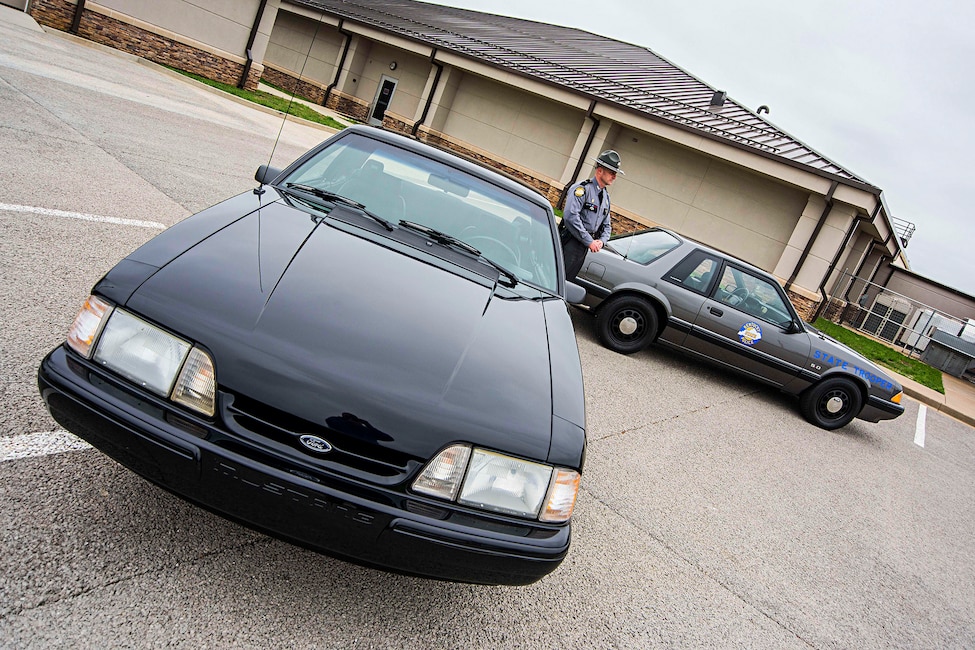 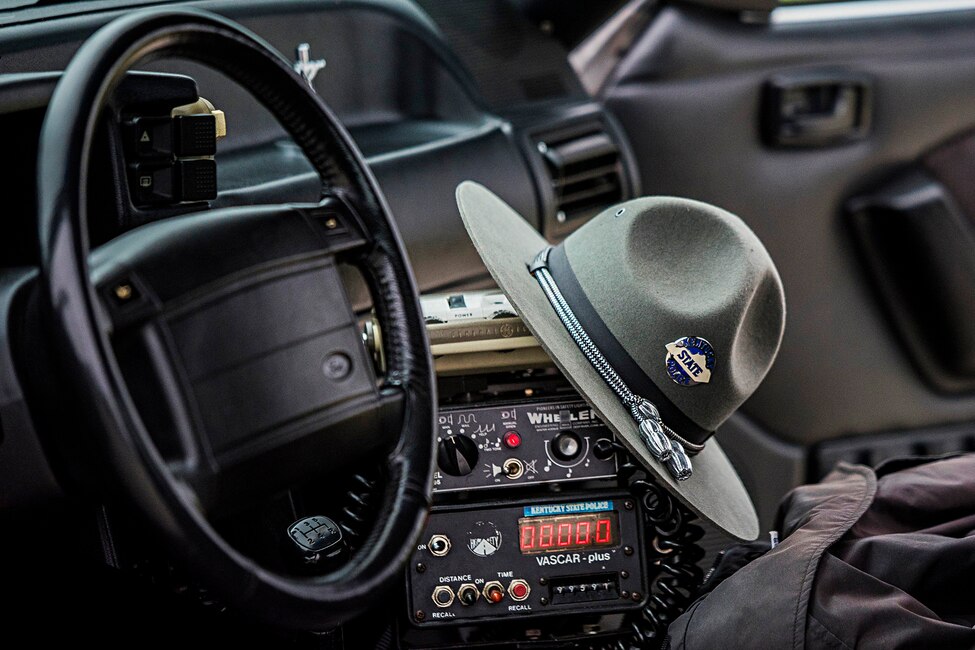 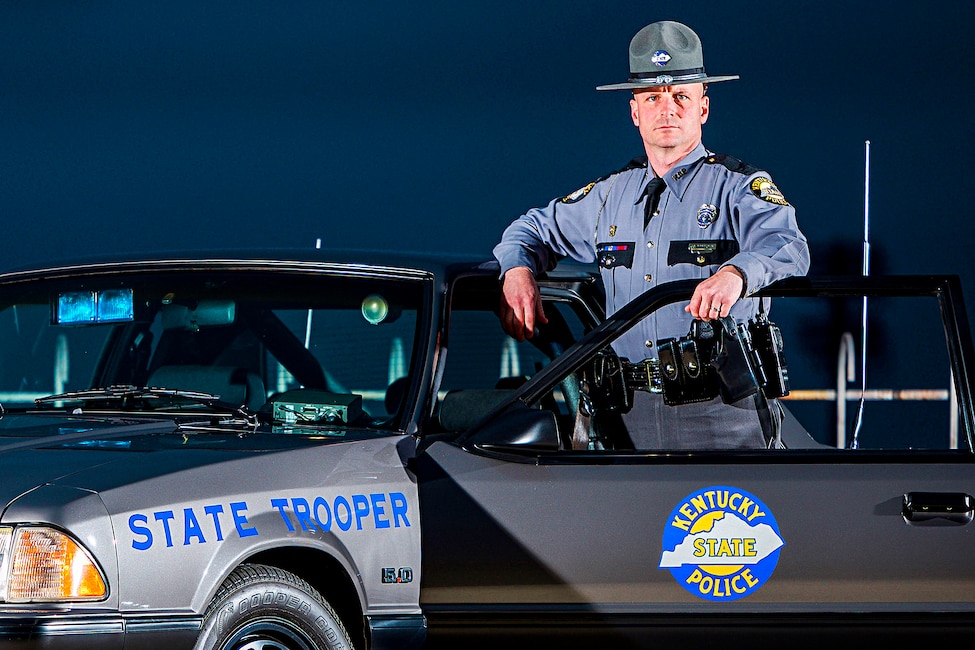 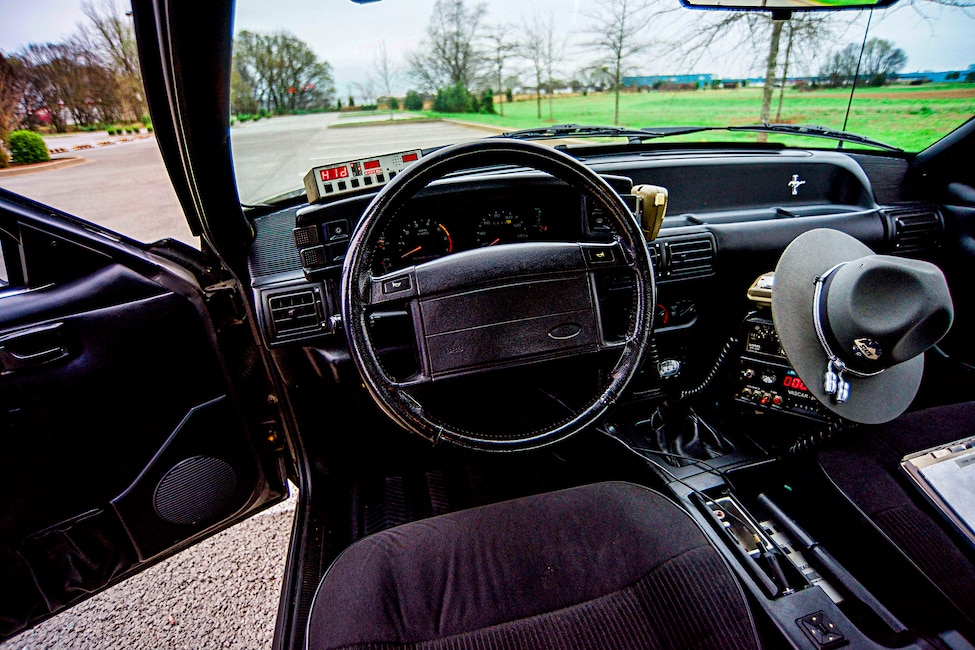 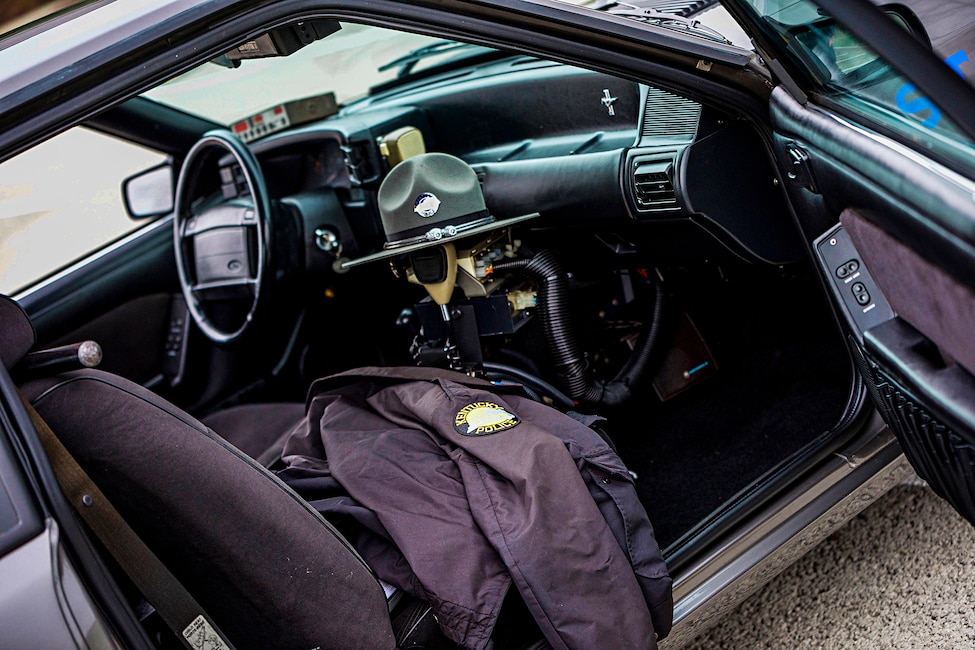 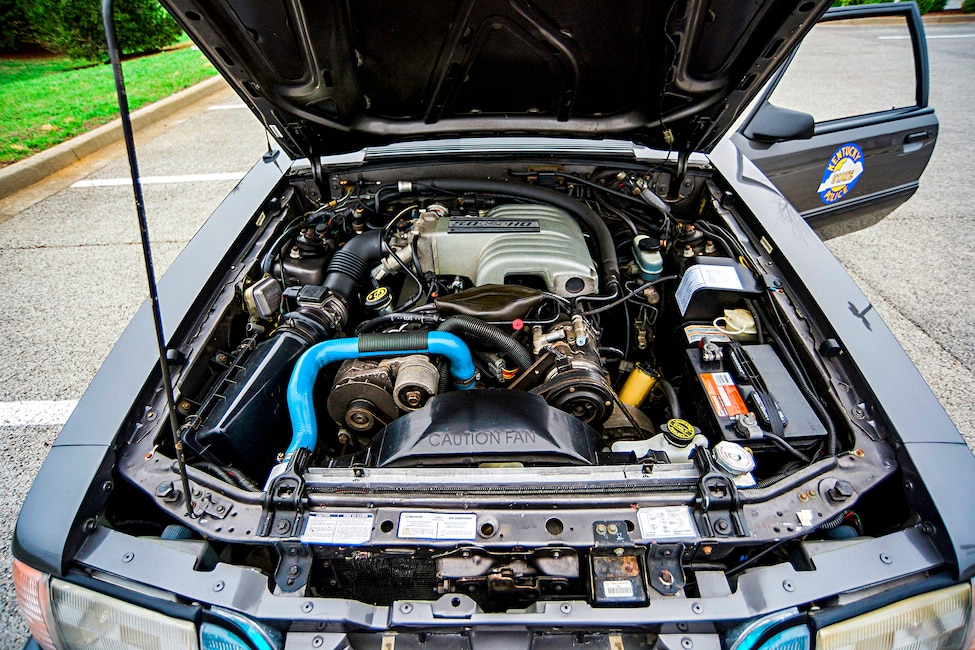 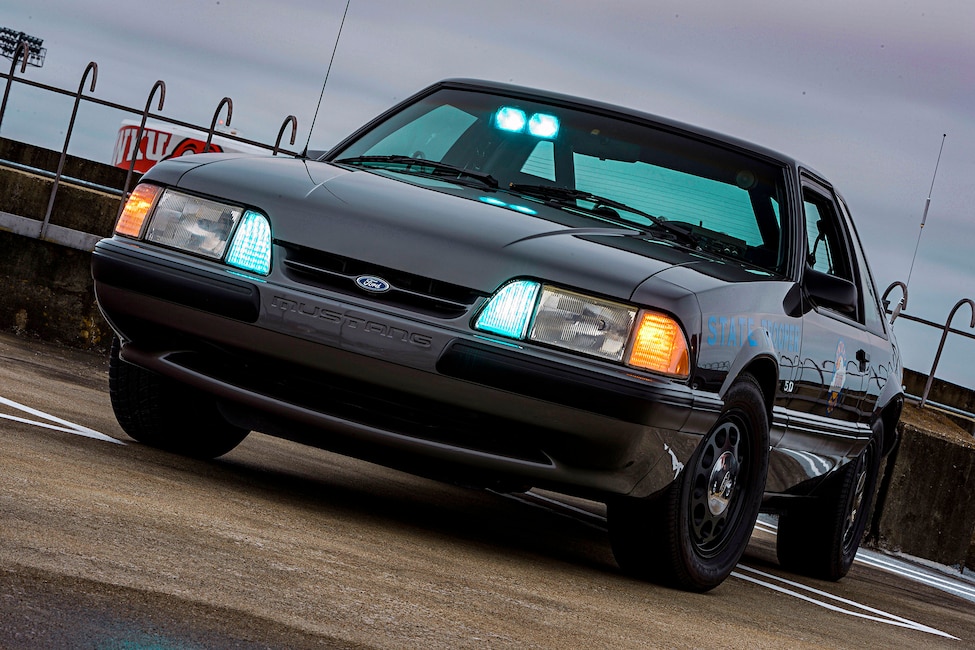 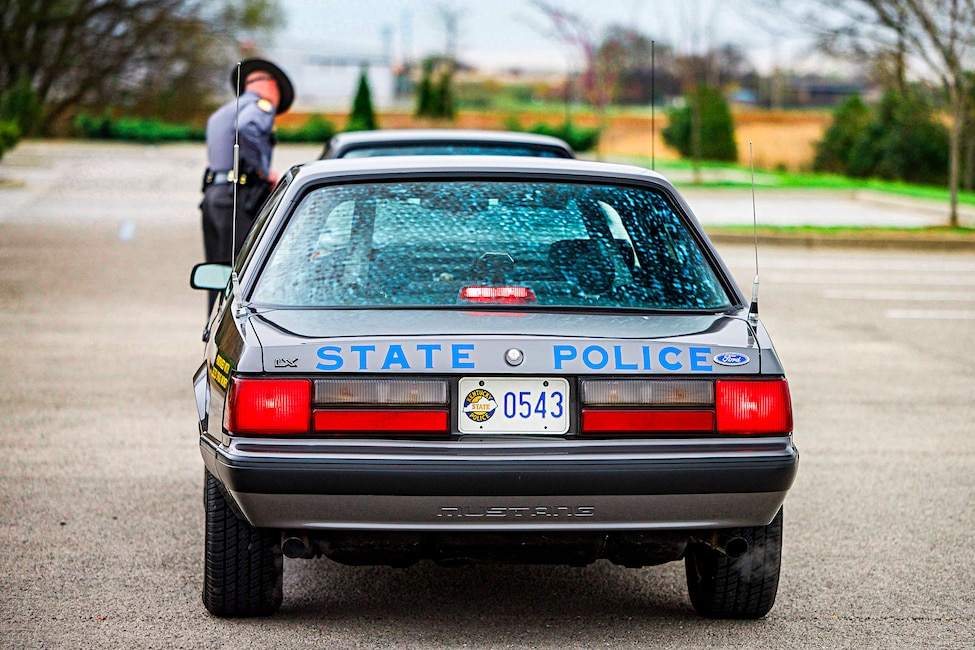 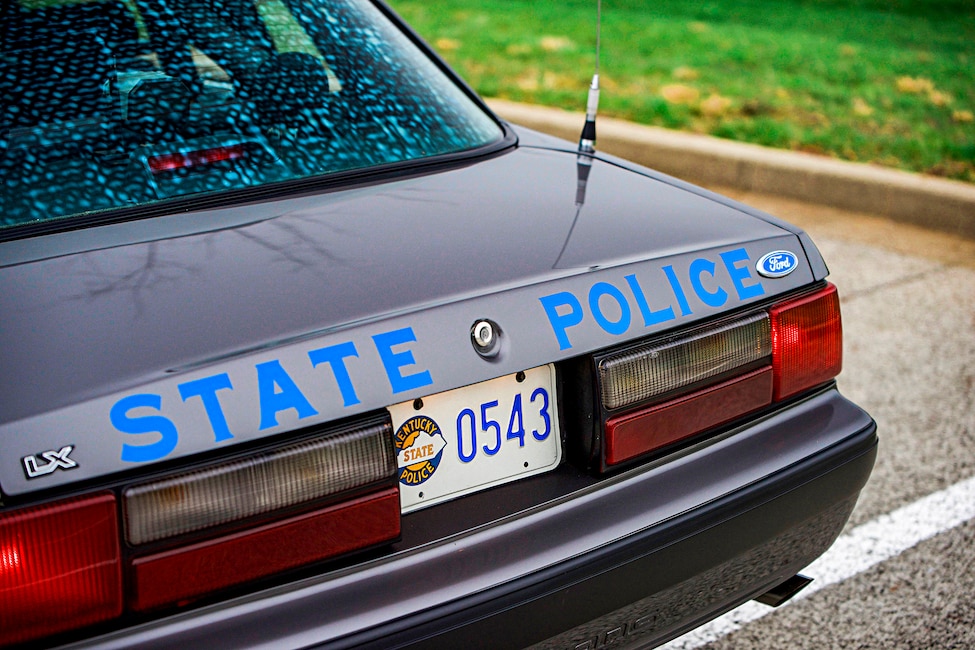 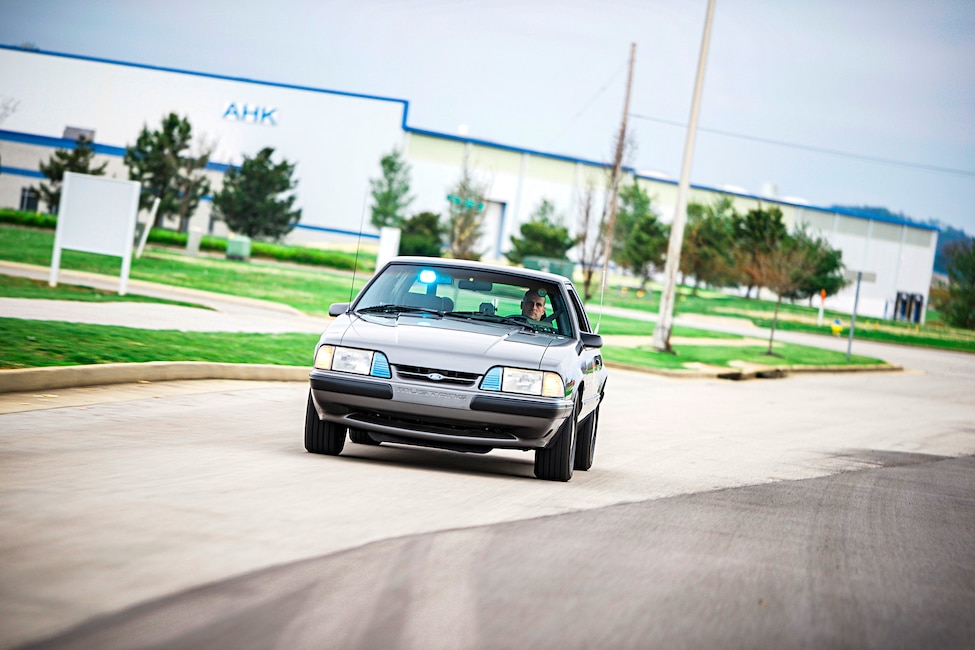 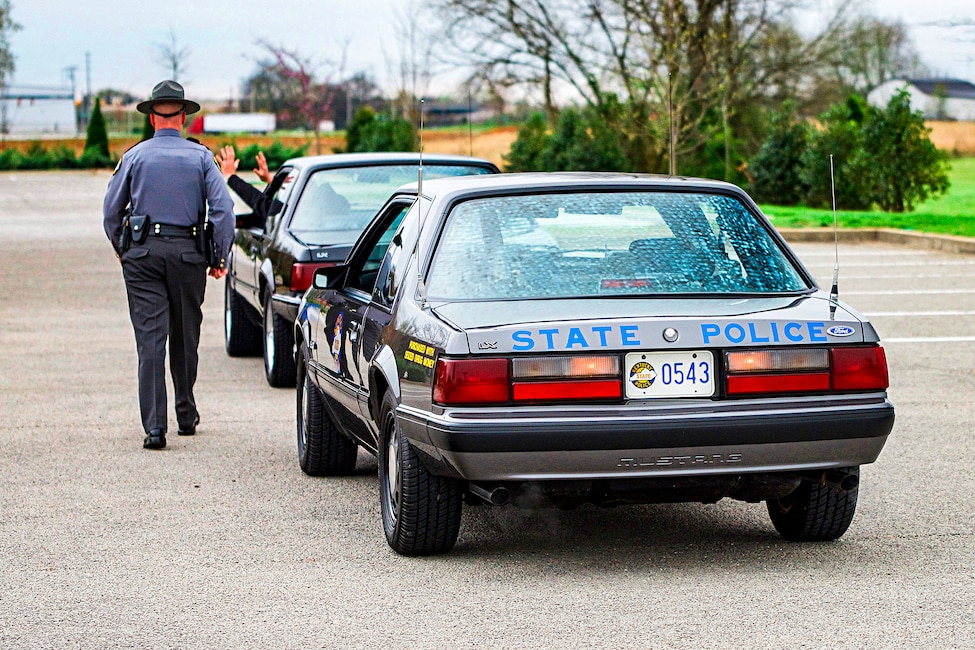 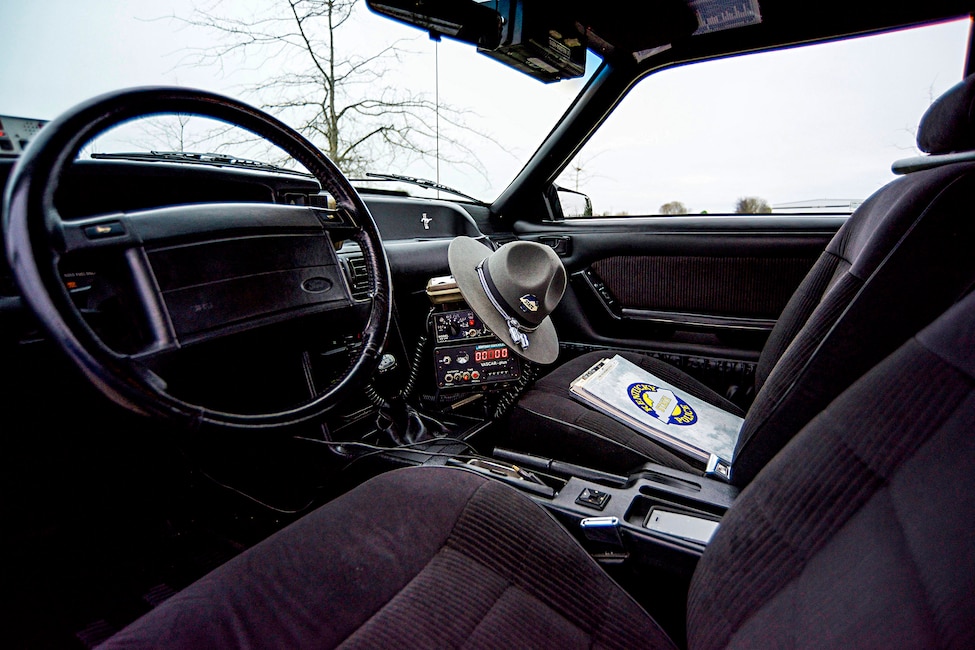