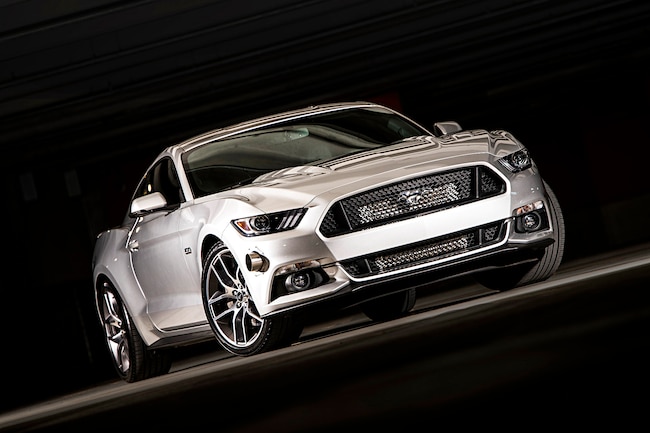 When Ford's designers labored over the styling of the first all-new Mustang in a generation, they had a huge task at hand. The Mustang was set to become available all over the world and feature an independent rear suspension under all models for the first time. The car had to appeal to longtime enthusiasts and expand its desirability to those who would never have considered Ford's pony car before.

We would say they pulled it off, and the best barometer of that success is the instant conversion of a longtime enthusiast like Nick Murphy. He dropped his S197 like it was hot and made the move to an S550, albeit after the platform hit its second birthday, with his sights set on a boosted performer that could serve as a daily driver.

"I got my first one in 1998; a1987 GT. My brother and I started tinkering with bolt-ons, which started the addiction, and I've had several since then. That includes a recent build I did in 2013 with a 2013 GT auto. I did full bolt-ons to that car with the goal of 10s naturally aspirated, which I achieved about a year later. It ran 10.94 at 123," Nick said of his longtime Mustang passion. "When the new-body S550 came out I was hooked, so I sold that car and built this one with nothing but boost in the plans. My brother has a turbo Fox 'vert and his wife has a 2015 GT 'vert, so it runs in the family."

Having fallen for the fresh styling, Nick now counts it as his favorite in the lineage thus far after 22 years of buying and modding Mustangs. However, he wasn't just about the S550 because of the looks. He had an eye on building a bolt-on-boosted combo that would really wake up its performance without hurting its driveability.

Looking stock right down to its wheels and tires, Nick Murphy's 2017 Mustang GT is motivated by a stock Coyote engine that gets a major boost in output courtesy of one big turbocharger.

For the most important part of this upgrade, he turned to the performance experts at JPC Performance for one of the shop's bolt-on turbocharger systems based on a Precision Turbo head unit with a billet wheel and ball-bearing drive.

While many go right for two turbos, Nick knew from the jump that he wanted one hearty hair dryer under the hood.

"I've dealt with JPC since 2007 for parts so I trusted Justin Burcham's kit and knew it would perform," Nick said. "Also I wanted a big single turbo because most everyone went twins so I wanted something different. I love popping the hood and seeing a big single!"

Supporting the monolithic boost is a JPC fuel system rated for 1,400 horsepower. It includes a Fore Innovations triple-pump fuel hat that fits in the factory tank. It feeds a steady supply of E85 to an octet of Injector Dynamics ID1050 fuel injectors.

The stock Gen 2 Coyote 5.0-liter takes in 17 pounds of boost from a ball-bearing Precision 86/85 turbo with a billet wheel and is held together by upgraded ARP head studs. That turbo is the centerpiece of the JPC single-turbo system reined in by a Leash Boost Controller, which pushes the engine's output beyond four digits at the rear wheels.

Tying it all together, Blankenship of Blankenship Tuning in Shelbyville, Kentucky, dialed up a custom calibration. Delivered with an SCT Performance BDX flash tuner, the calibration yielded 993 horsepower and 879 lb-ft of torque at the rear wheels, which is surely a blast to drive.

"It's really unbelievable," Nick laughed. "The car feels like it's leaving planet earth. What is also amazing is the car is still on original OEM tires and won't spin at wide-open throttle if you're at over 65 mph. All that suspension is stock, so it all moves around just enough to keep tires planted. I can't dig race on them obviously, but from a 65 roll it will hold all the power."

"The car really wakes up at around 4,000 rpm. Everything after that is just head-pinning," Nick added.

Not only does he love the resulting combo, but the turbocharged GT is a huge hit with his daughter, Brooklyn, as well.

Understandably, the stock 20-inch tires struggle to corral nearly 900 lb-ft of torque off the jump. However, once the car is rolling the stock rubber and suspension do an admirable job putting the power down.

"She's absolutely in love with it. She's never cared about me selling my older cars, but has insisted this one is not for sale. She wants to go out cruising as often as possible and is quick to say, 'Look dad, there's a 'Vette," and wanting to pick a race. We joke about how she's not allowed to date anyone when she's older unless their dad's car makes more power than her dad's."

While four-digit power is definitely more common these days, those high school boys might have trouble topping the output of Nick's machine. Of course, they might think the challenge is a simple one because of the car's stock appearance, which jolts a lot of unsuspecting challengers.

"It definitely surprises people. That's one of my favorite things about the car is how stock it appears. We like to stay in the slow lane as much as possible so people don't see the downpipe out the front bumper until its too late," Nick said. "A lot of random Vettes try messing with us thinking it's stock, only to see nothing but taillights thereafter. I think people are usually surprised to see that big single turbo under the hood. So many people run twin kits anymore so it has a little wow factor to it."

While the stock drivetrain and turbo are certainly fast friends for now, Nick knows he will eventually need to step up his game to keep his Mustang GT running at a high level.

Inside, Nick's Mustang GT looks like it just rolled off the Flat Rock assembly line.

"We will probably just keep it as-is until the stock motor and trans give out. They both have held up great so far, although we did swap out the stock head bolts recently to some ARP studs with new gaskets because it had started using a little coolant," Nick said. "We knew we were pushing the stock bolts at this power level so it wasn't a surprise. Since then we've up'd the boost to 17 psi, so it should easily be making 1,000 to the wheels at this point, still with an all-stock drivetrain."

Rocking over four digits at the wheels with a bolt-on turbo and nothing more than upgraded head studs shows just how impressive the modern Coyote engine can be. However, once the stock hardware inevitably meets its maker, Nick has big plans for the future of his sleeper stallion.

"When the stock motor/trans goes out we plan to max out this PTE 86/85 with a sleeved long-block from MPR and a Brett Lasala-built 6R80 transmission. I'd like to see 1,400 rear-wheel horsepower with that setup and this turbo. Then, of course, we will add the supporting parts to make it track-ready, such as axles, driveshaft, wheels, tires, etc. It will always stay a street car with air conditioning, leather, stereo, etc."

So, like most Mustang projects, this one started out stock, moved to bolt-ons, and still has a fun future of mods ahead of it. 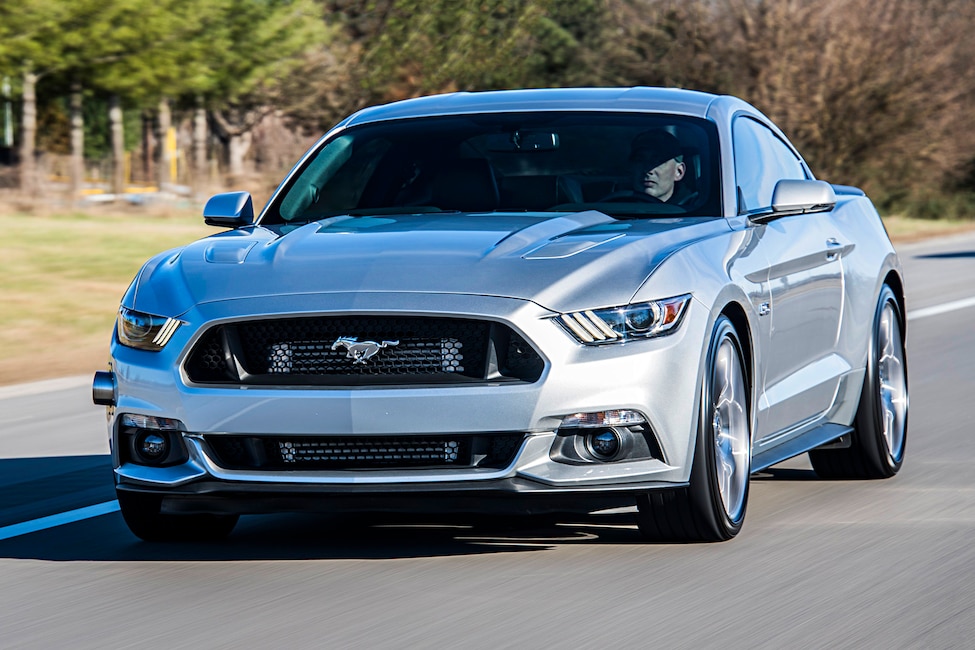 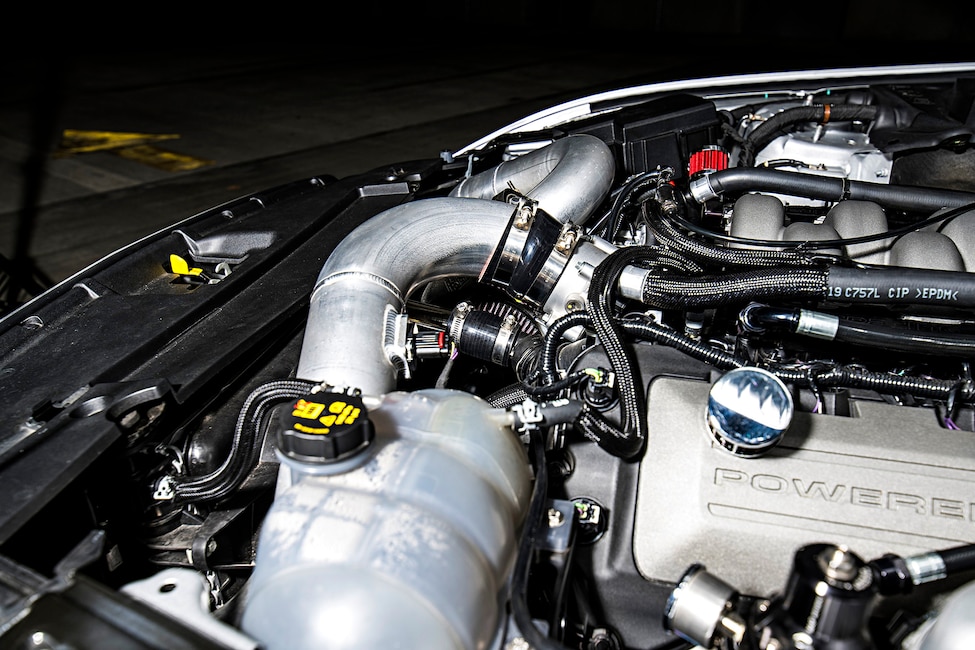 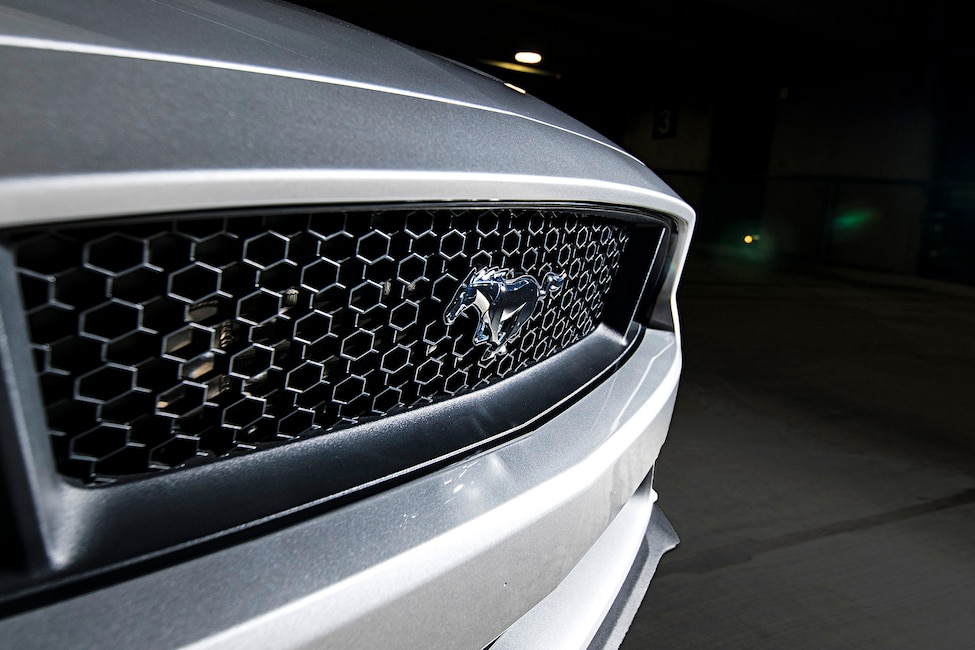 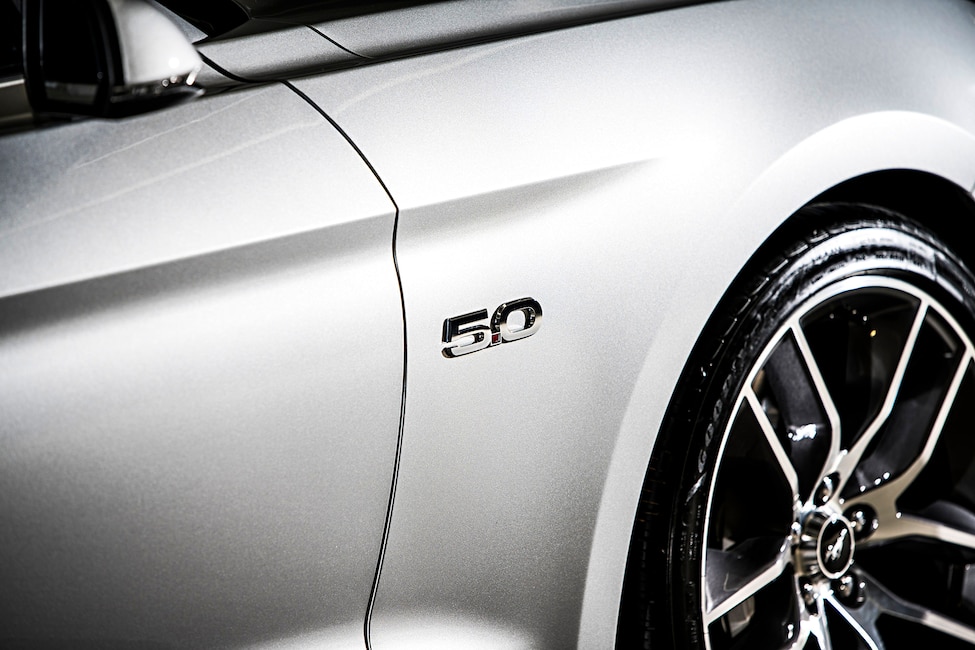 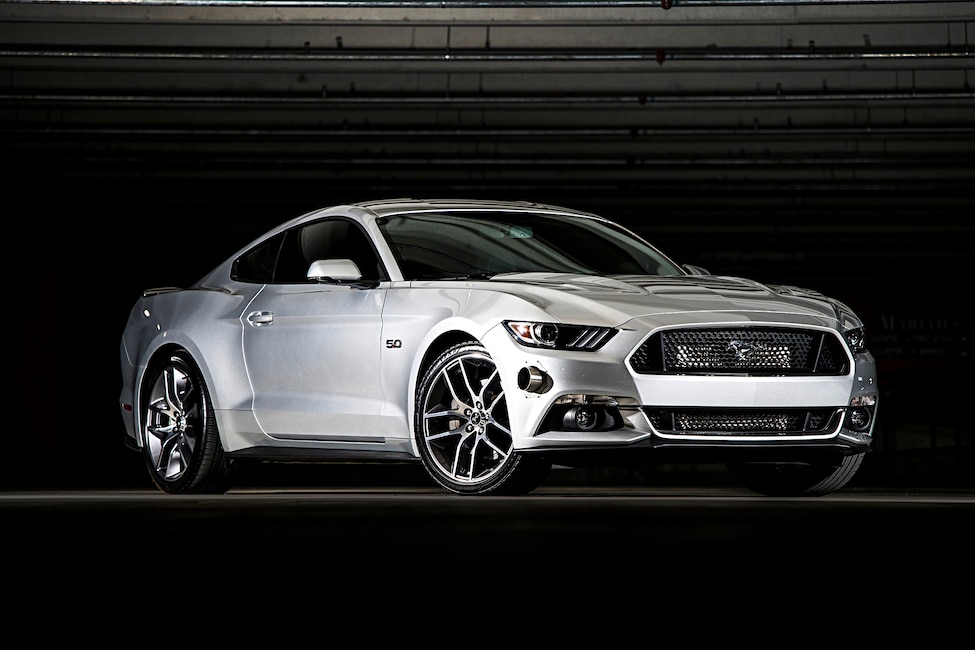 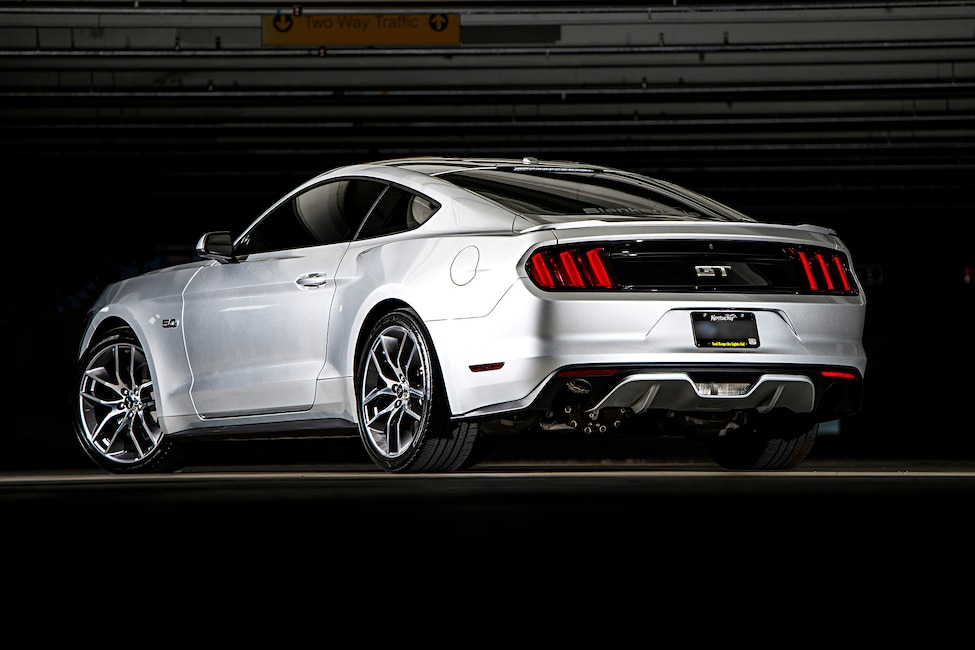 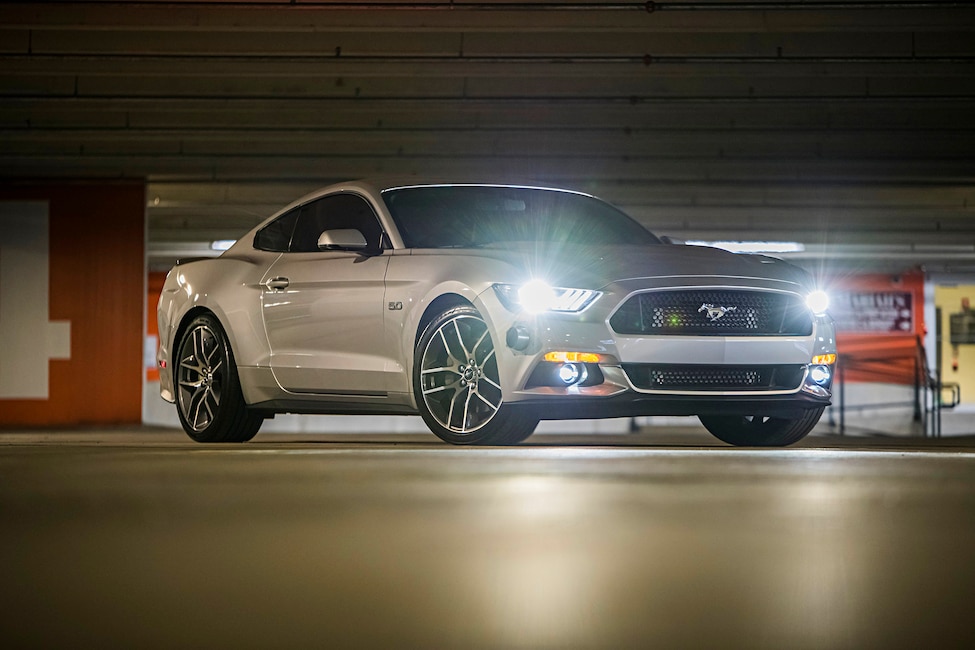 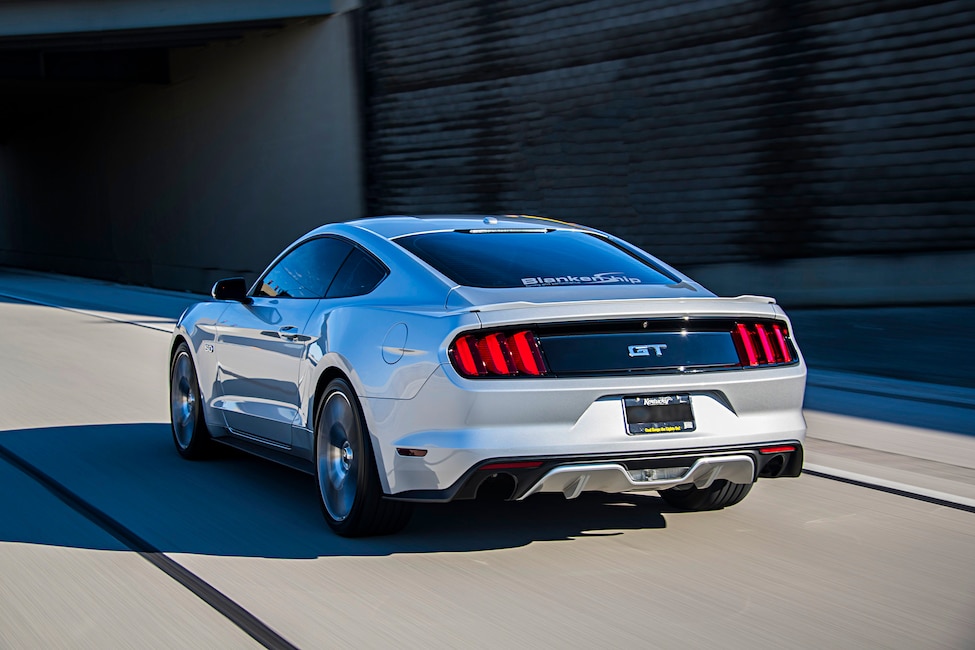