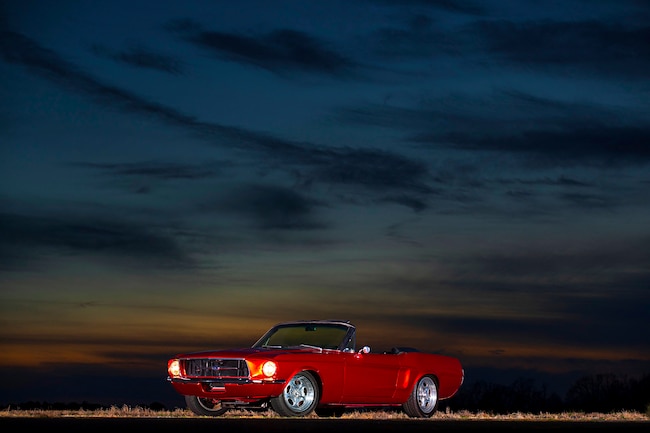 Brent VanDervort's 1968 Mustang convertible has had more lives than a proverbial cat, and the fact that it's alive and well today is nothing short of a miracle. The car was born with a standard 230hp, 302ci V-8 and C4 automatic transmission, and by all accounts led a pretty ordinary life until a collision took it off the road more than three decades ago.

"When I first saw the car about 28 years ago," recounts VanDervort, "it had been sitting for quite a while and was really a mess. It had been hit in the front and left-hand side and then parked. Someone took out the original 302 and C4 and they were both siting inside the car when I found it!"

While most people who looked at this Mustang saw little more than a parts car, VanDervort had the knowledge, experience, and ambition to see past the problems and knew he could resurrect the drop-top without too much difficulty. He's a mechanical engineer, designer, and fabricator with extensive experience building hot rods and restoring vintage vehicles. He's also the owner of Fat Man Fabrications in Mint Hill, North Carolina. Fat Man Fabrications (fatmanfab.com) designs, tests, manufactures, installs, and sells complete chassis, front and rear suspensions, brake packages, and a wide variety of related parts for many different cars and trucks from the 1930s through the 1970s.

VanDervort traded a pile of horse ring fence posts plus $500 cash for the sad-looking Mustang and immediately got to work restoring it for his daughter, Emily, who was then in high school. He had Raymond Dorn in Mechanicsville, Virginia, pull out the collision damage, and then, with help from Gary Rawlings and his staff at Reflections Paint & Body Shop in Charlotte, North Carolina, he did all of the necessary bodywork. Gary Rawlings did the final paint prep and sprayed the laser-straight body turquoise and white. "This was the 'Barbie Dream Car' look we initially did for my daughter, Emily. She drove the car like that in high school and then college."

Concurrent with the body- and paintwork, VanDervort rebuilt the car's original engine and transmission. NAPA Auto Parts in Charlotte bored the block 0.030 inch over and balanced the rotating assembly, which consisted of stock Ford parts and hypereutectic pistons. VanDervort assembled the engine with a mixture of stock Ford and aftermarket performance parts to give it a little more zing than stock, but not so much that the car lost drivability.

The interior maintains an OEM look and feel but has numerous changes to personalize it, including a reworked dash with six Classic Instrument gauges plus a stereo and Vintage Air climate control.

The open-air Mustang was completed in June 1993 after about eight months of work, but two years later, VanDervort turned his attention to the car once again. "I was designing a new independent front suspension for street applications and used the Mustang to prototype it." This process ultimately led to the creation of Fat Man Fabrications' late-model strut IFS conversion kit for 1964 through 1973 Mustangs. This system bolts into the stock Unibody sheetmetal structure and provides for an adjustable 2- to 3-inch drop, large disc brakes, power rack-and-pinion steering with a mount that reinforces the frame, and zero bumpsteer. The stock suspension is notorious for its bumpsteer, so eliminating it altogether yields big handling advantages, especially with wider-than-stock tires.

To complement the Fat Man Fabrications IFS, VanDervort installed a RideTech 4-link rear suspension setup. This bolts onto the stock leaf-spring mounts and requires welding four small tabs to the axlehousing to attach the upper bars. VanDervort chose to go with HQ Series ShockWave air suspension struts for the rear. The 4-link suspension drops ride height about 2 inches and provides much more precise handling than the factory suspension. The ShockWave air spring and shock absorber assemblies feature 24-position rebound adjustment that enables drivers to fine-tune the suspension to their needs and wants.

In addition to modifying the chassis in 2005, VanDervort also chose to make several subtle but noteworthy changes to the body before repainting the car. "We nipped the rear fender lips just a little bit to fit 17-inch tires back there," he explains. "We also relocated the gas fill to under the trunk lid and removed all exterior emblems for a cleaner appearance, fabricated an all-metal, Shelbyesque front valance, molded the rear fender caps into the quarter-panels, installed LED turn signals into the front bumper, and made a custom rear spoiler that resembles what was used in the 1969 SportsRoof Mustangs." Once the bodywork was finished, the car went from the turquoise-and-white "Barbie Dream Car" scheme to a much more masculine Ford copper color.

Both the first time around, when he restored this Mustang for his daughter, and when it was born again in 2005 to serve as a testbed for the new independent front suspension he engineered, VanDervort designed a car that could be driven year-round with confidence. And drive it he does, averaging about 8,000 miles per year. As planned, it respects its OEM roots with numerous updates, upgrades, and enhancements that make it safer, more reliable, and a whole lot more fun than it was when new.

VanDervort rebuilt the stock 302 with a Ford rotating assembly and cylinder heads, and then added a mild Comp Cams hydraulic camshaft, Edelbrock intake manifold, and Edelbrock carburetor. Hinson Transmission went through the C4 automatic to return it to like-new condition with a stock torque converter and valvebody and a B&M shift kit. Reducing engine compartment wiring clutter was helped along by a Powermaster one-wire alternator. Waste gases exit via stock manifolds and 2-inch pipes connected to Flowmaster 50 Series mufflers. To make sure the rebuilt engine stays cool in all circumstances, VanDervort installed a 16-inch Spal electric fan. And to make sure the car's passengers also stay cool, he added a Vintage Air SureFit Series air-conditioning system to the Mustang.
VanDervort kept the overall OEM look and feel of the interior while making numerous changes to personalize it. He totally reworked the dashboard using a Carriage Works panel to create a flat, symmetrical look. An array of six Classic Instruments gauges helps keep track of all vital signs, and a Sony CD stereo was installed. Richard Brown helped out with rewiring the car to accommodate the upgraded instrumentation and electronics. The Mustang's stock steering wheel gave way to a Colorado Custom wheel, and the original seats and door panels were recovered with black and silver upholstery by Leon Brown of Brown's Custom Auto Upholstery in Concord, North Carolina. Leon Brown also installed a new convertible top.
VanDervort moved the fuel filler to the corner of the trunk recess.
Colorado Custom wheels and BFGoodrich g-Force Sport tires look great and deliver superior handling, braking, and ride comfort.
Custom front lower valance and LED turn signals molded into the front bumper are subtle but effective modifications.
Body emblems were removed, and the endcaps were molded into the rear quarters for a super-clean look. 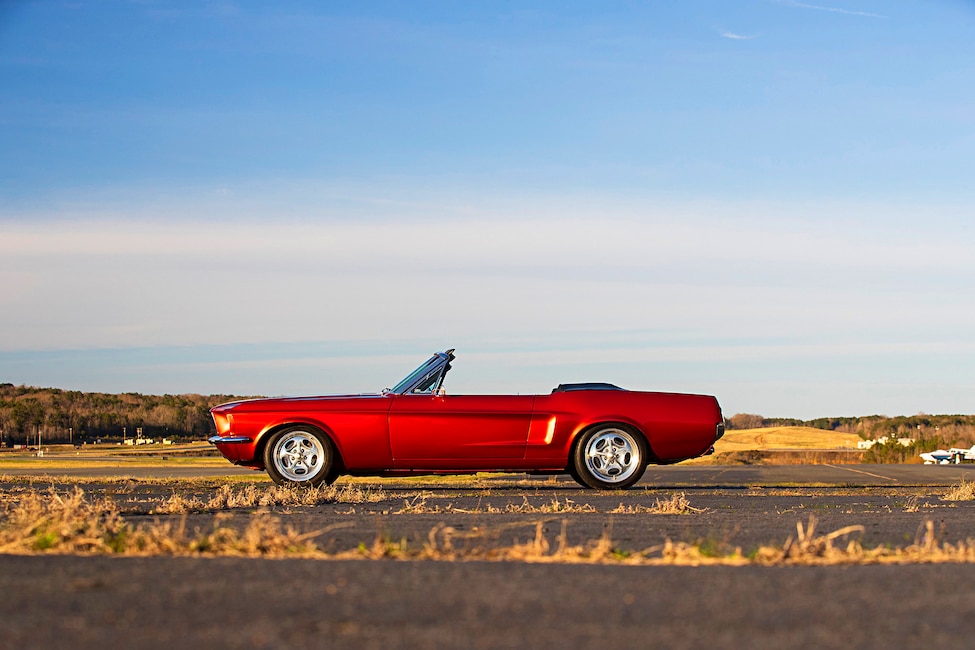 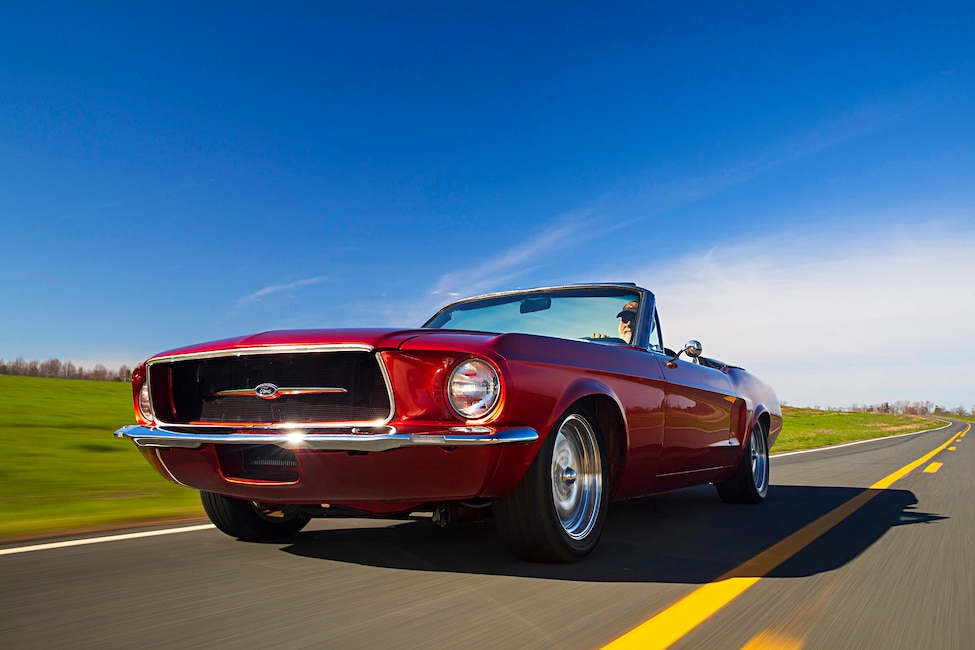 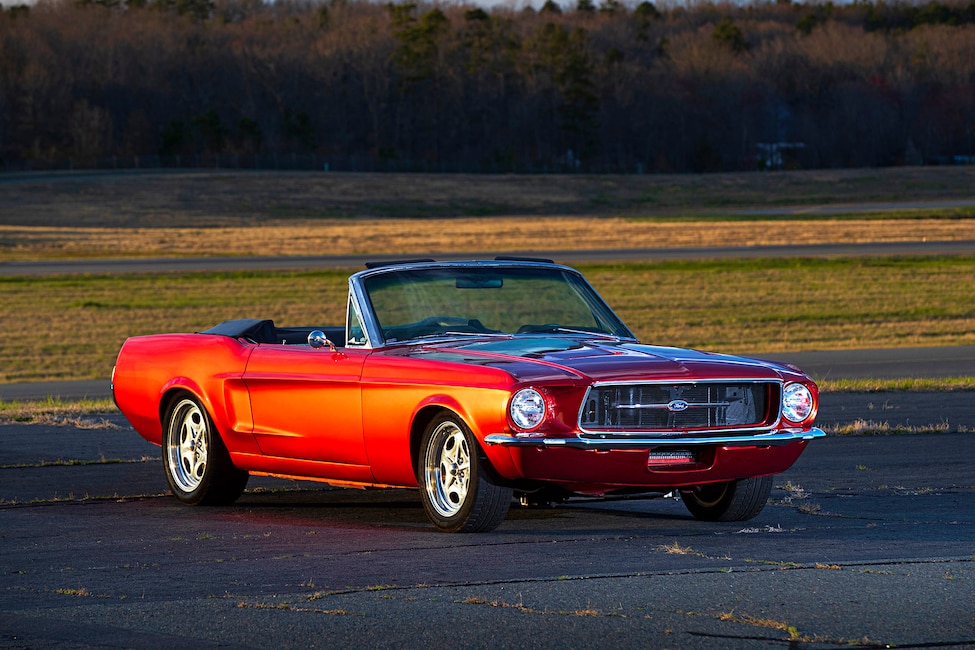 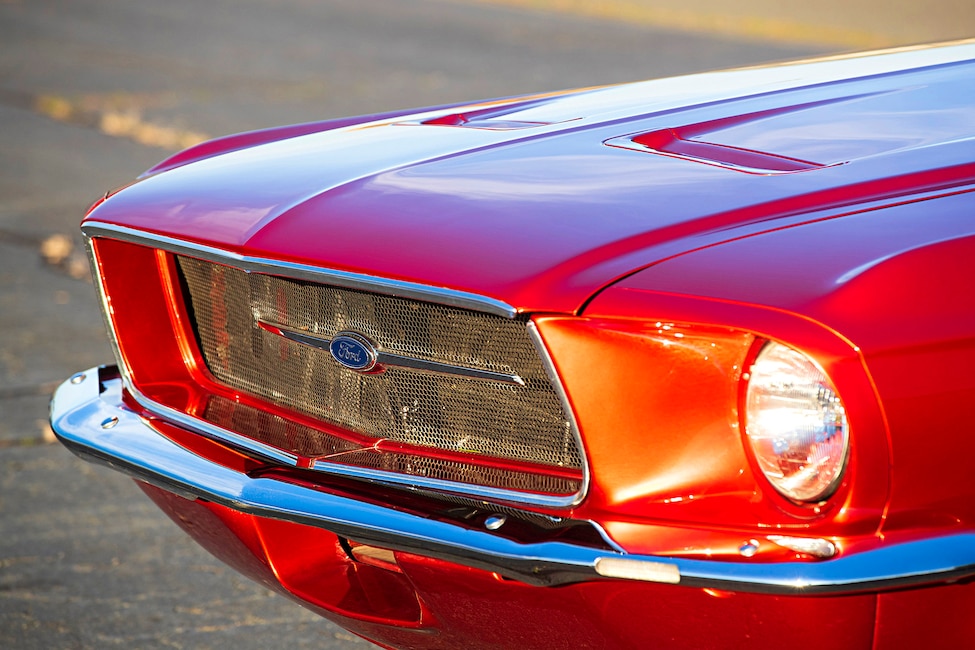 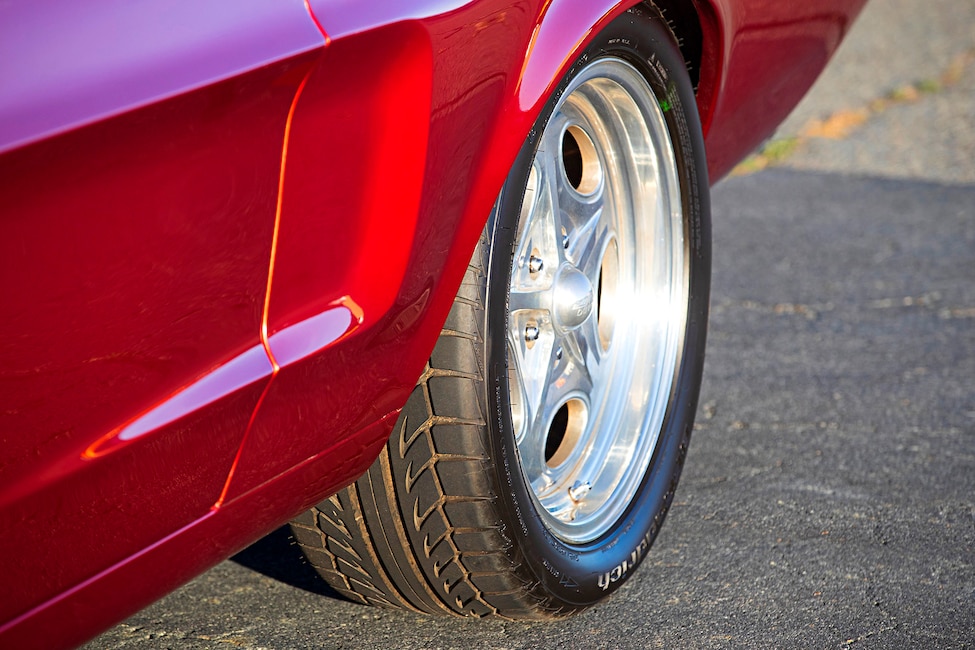 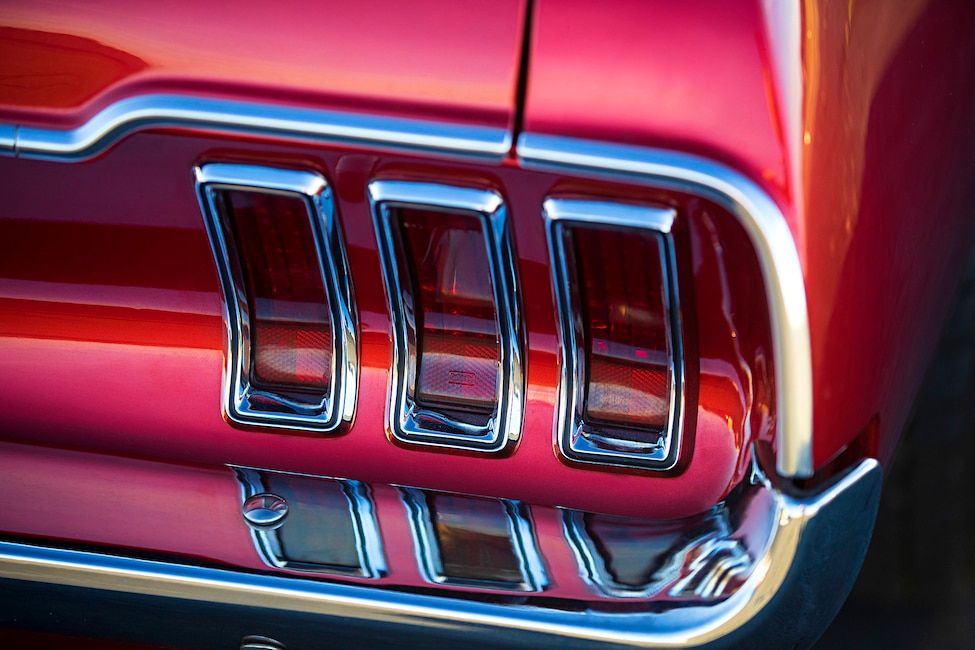 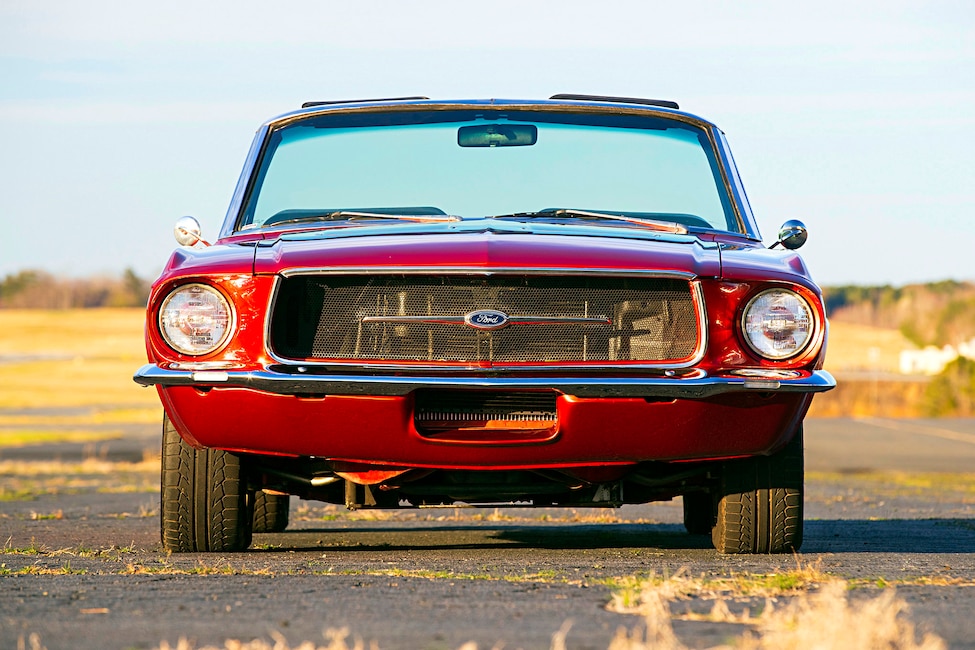 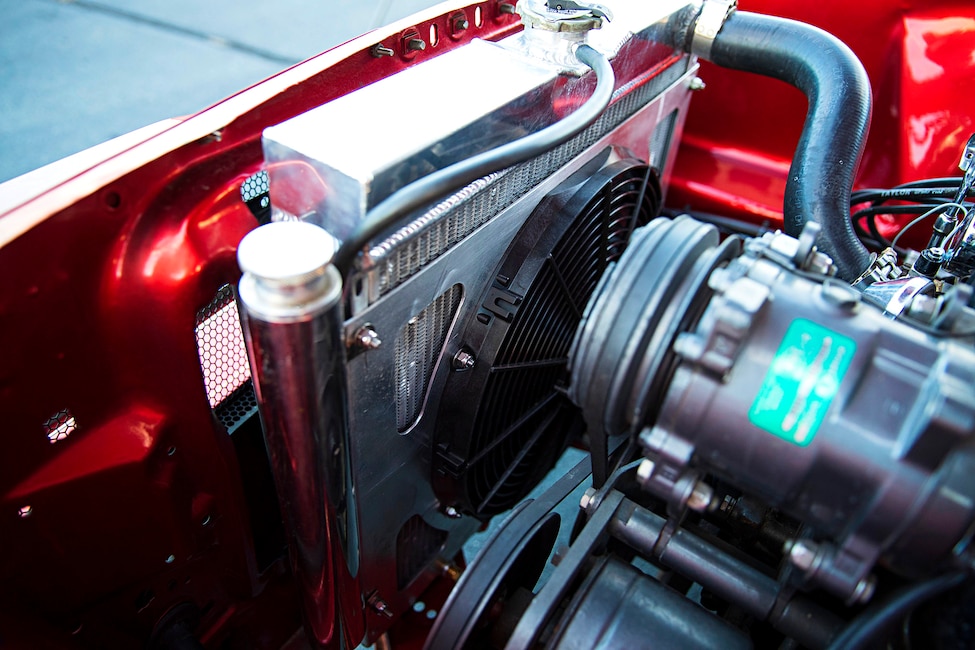 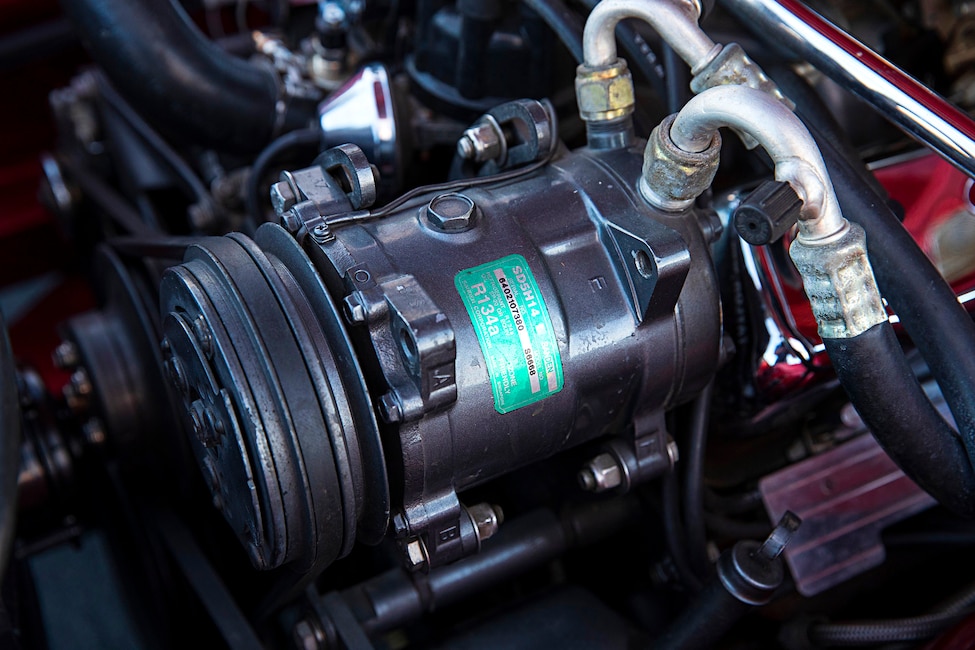 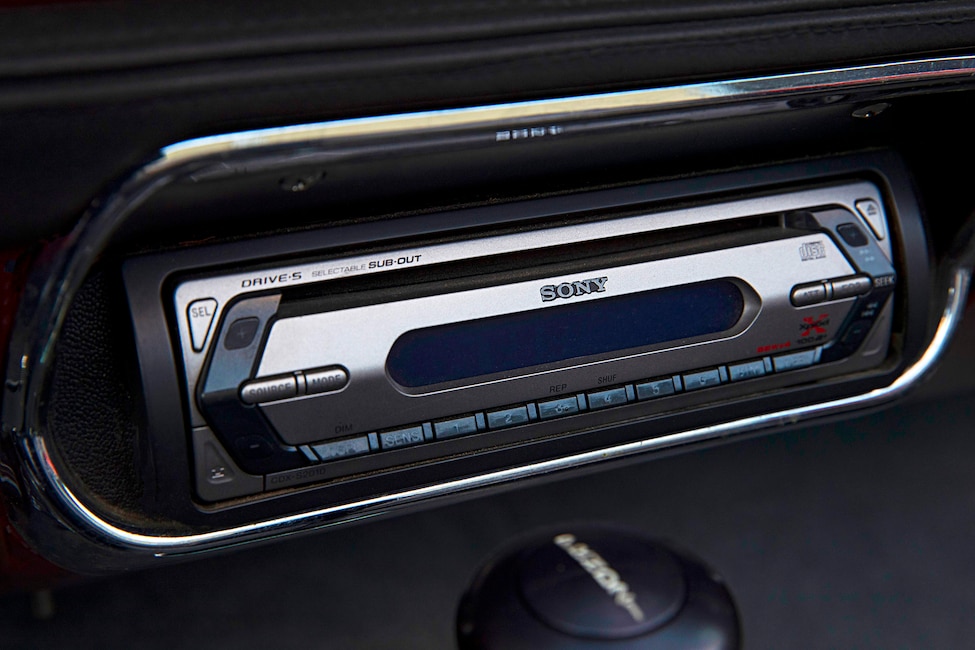 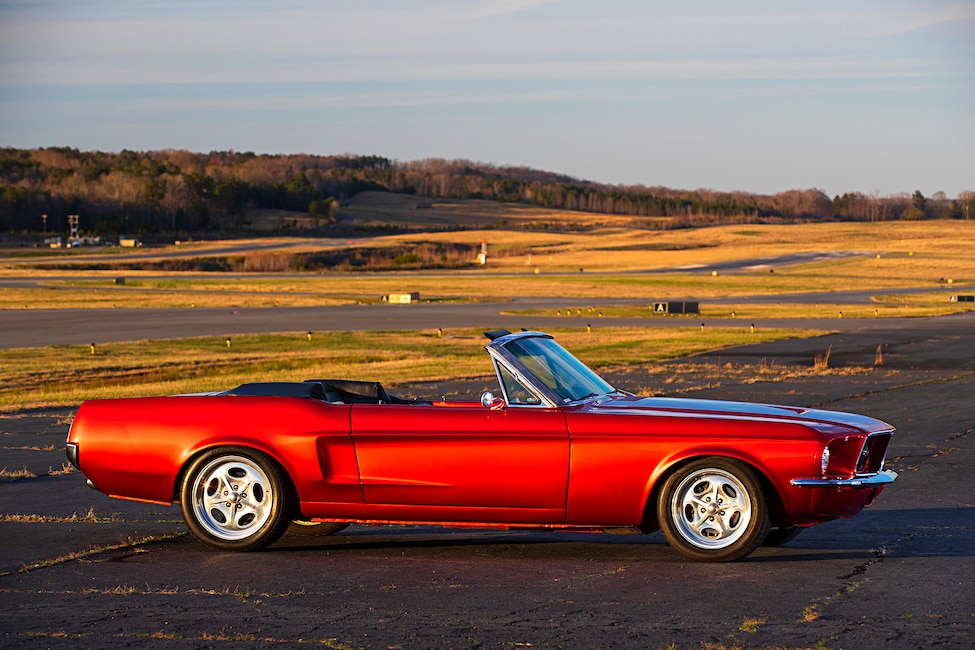 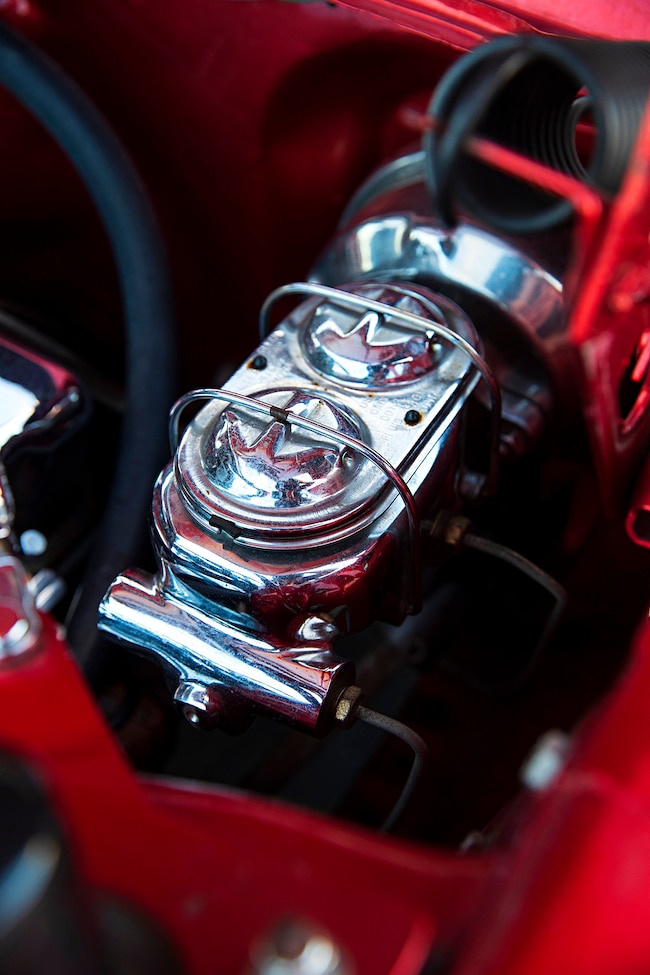